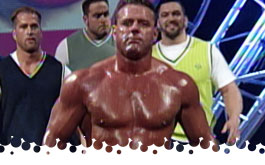 -From Springfield, MA. Our hosts are Michael Cole and Jerry lawler.

-D-Generation X, reunited after breaking up the previous spring, come to the ring to a babyface reaction, despite WWF Champion Triple H firmly entrenched as the top heel in the company. The fans do end up chanting "a-hole" at HHH once he starts talking about being better than Rock and Austin. X-Pac takes a turn on the mic and teases that DX will be bigger than ever with a new member joining. Billy Gunn and Road Dogg challenger Austin and Rock to singles matches later on. Triple H calls out Mr. McMahon to come bow before them. Vince responds on the stage, simply telling DX to suck it. Triple H defiantly announces that DX are taking over. Good reintroduction for DX in a segment that didn't overstay it's welcome.

-Test and Stephanie McMahon arrive holding hands and are warmly welcomed by Patterson and Briscoe.

Edge and Christian vs. Too Cool (Scott Taylor and Brian Christopher)

Crash and Hardcore Holly join commentary for the match. Edge and Christian get the hot start, piling Too Cool in the corner and hitting double arm drags. Taylor hangs Christian on the ropes and delivers The Worm for perhaps the first time on television. Christopher tags and crotches Christian on the ropes and then delivers a nasty sunset flip powerbomb off the apron! JEE-SUS! Too Cool punish Christina further with a powerbomb combo. Christian desperately hits a tornado DDT and makes the hot tag. Edge dodges a moonsault and spears Taylor, but Christopher saves the match. Crash interferes, knocking Edge with the scale, and Taylor steals the pinfall at 4:22. Good TV match with some really unnecessary bumps.
Winners: Too Cool

-Too Cool and the Holly's beat down Edge and Christian, no sign of the Hardy Boyz.

-Earlier, Jim Ross talked to Big Show, who was holding the remains of his father's pocket watch, destroyed by the Big Boss Man on Raw. Show says he's just going to leave and that next time we see him, he'll be doing something he'll regret for the rest of his life.

-Mark Henry, wearing nothing but a towel, sends some hoes away, and then welcomes another round of women into his locker room. Gross.

-Chris Jericho comes to the ring and is amused because Stevie Richards has challenged him to a match. Jericho blames Stevie for spoiling their match on Raw and is ready to beat the hell out of him. Richards, dressed as Chyna, answers the call.

Jericho dumps Richards immediately and rips the wig off his head. Jericho nails a suplex on the floor and violently drags him to the ring for a stomping. The real Chyna and Ms. Kitty show up, and Chyna clocks Jericho in the head with the IC title, allowing Stevie to roll him up for the win at 1:39. Complete squash until the screwy finish.
Winner: Stevie Richards

-Richards eagerly hugs Chyna, but she punches him out. I suppose imitation isn't always flattery. Jericho isn't finished either, and powerbombs Richards and whips the stuffing out of him.

-The Rock arrives at the arena, but Road Dogg is waiting for him. Rock fights him off, but the rest of DX swarm him. They shut Rock in his trunk and drive him out of the parking garage.

-Back from break, and Kevin Kelly asks DX if they're out of their minds. Triple H reminds him that DX is taking over. Gunn says this is nothing compared to what he's going to do to Austin.

European Championship:
D'Lo Brown © vs. The British Bulldog (with the Mean Street Posse)

A Posse distraction allows Bulldog to attack from behind. Brown quickly tosses Bulldog for a dive over the ropes. Bulldog reverses a suplex onto the concrete floor and smashes the steps into Brown's head. Brown manages to backdrop Bulldog out of the ring again, but Rodney chop blocks the back of his knee. Bulldog takes control of the match, clocking the European title into Brown's face while the Posse creates a diversion. D'Lo escapes a chinlock and they both go down with a double clothesline attempt. D'Lo makes a comeback, complete with his patented leg drop. Brown knocks Pete Gas off the apron and nails the running powerbomb on Bulldog. Gas prevents a Lo Down, and Bulldog nails a superplex for the win at 5:14. The Posse aren't quite as cool as the Bullet Club, but they got the job done.
Winner and new European Champion: The British Bulldog

-X-Pac explains to Kane that DX is just a side thing and that their team is his first priority.

-Road Dogg is chuckling about what he did to The Rock, telling an elderly security man that Rock got dropped off on the other side of the tracks.

Kane and X-Pac vs. Bubba Ray and D-Von Dudley

Kane no-sells D-Von shots and drops him with a big boot. Sidewalk slam by Kane and the flying clothesline. Kane clears the ring of the Dudleyz and leaps off the steps for a clothesline on Bubba at ringside. The Dudleyz regroup and whip Kane into the steps (while X-Pac watches from his corner). Kane knocks the Dudleyz down with a double shoulder block, and X-Pac tags in, but quickly decides to low blow Kane and put him down with the X-Factor! The Dudleyz capitalize and win at 3:06. The swerve was completely predictable, but effective nonetheless.
Winners: Bubba Ray and D-Von Dudley

-Kane wants answers, but gets swarmed by DX. X-Pac says that he's sick of carrying Kane's big ass and that he isn't DX material.

Matt and Jeff Hardy (with Terri Runnels) vs. Viscera and Mark Henry (with the hos)

Viscera has stolen the Godfather's hos and is proving to not be a fun and lovable pimp. Viscera absorbs Matt's ineffective shots and corner him. Jeff makes the save and the Hardyz hit Poetry in Motion. Viscera wrenches the Hardyz into one another but misses an elbow drop. Viscera blocks a double suplex and DDT's both Hardy Boyz. Mark Henry continues the destruction, but is distracted by Terri's hotness. The Hardyz hit a flurry of attacks on Henry and Matt scores the pinfall at 2:23. Huh, not too bad.
Winners: The Hardy Boyz

-Viscera is furious about losing and beats up Mark Henry, splashing him repeatedly.

-DX receive word that Steve Austin has arrived at the arena and go on a Stone Cold hunt.

Between feeding Al Show his dog and mocking Big Show's dying father, I think Boss Man's real gimmick is that he's the worst human being on Earth. Just like every other match this month, Boss Man attacks Snow from behind to start the match. Snow clears the ring and connects with a dive. Slingshot leg drop by Snow gets a 2 count, but Boss Man nails a big boot. Snow gets a drop toe hold for a cover, but Boss Man comes back with a clothesline. Boss Man stands on Snow's hair and pulls him up by the arms. Snow makes a punching comeback while Prince Albert taps the night stick on the steps for a distraction. Boss Man clocks Snow with the Hardcore title for the win at 2:57. This wasn't "good" but I enjoyed it.
Winner: Big Boss Man

-Snow grabs a microphone and sarcastically calls his "2 on 1" loss an upset. Snow is off his medication and declares himself the clown prince of hardcore and wants to face both of them in the parking lot in a Hardcore title match.

-In the parking lot, Road Dogg is stuck in a bear trap. I can't make this stuff up. Steve Austin stands over him and asks if it hurts.

-Prince Albert and Big Boss Man are somewhere else in the lot looking for Al Snow. They decide to wait inside a car to ambush him. Big Show pulls up in a forklift and traps them in the car and starts smashing on the windows. He leaps to the concrete platform and drops a dumpster onto them! Well, they're dead.

-Mankind is roaming around singing "He's got the whole world in his hands."

-Meanwhile, Billy Gunn has been trapped in a snare. Austin shows up to taunt him and spray beer.

Venis talks some smack before the match and charges in. Mankind has the upper ground, but Venis smashes him into the turnbuckles. Mankind ducks to send Venis crashing to ringside. Venis drives Mankind into the steps and starts working over the shoulder. Venis looks like a killer during the heat sequence, it's a shame he ultimately settled in as a jobber. Mankind takes a load of punishment and desperately hits a DDT. Mankind can't find Mr. Socko, allowing Venis to hit a side Russian legsweep. The Money Shot misses and Al Snow runs in with Mr. Socko! Mankind is able to apply the Mandible Claw and pins Venis at 5:53. This was a really fun taste of what Venis could do and a great babyface performance by Mick, **1/2.
Winner: Mankind

-DX regroup after becoming the hunted. X-Pac's phone rings and it's Stone Cold issuing more threats. The ceiling collapses on X-Pac and it seems Austin has struck again.

-D-Generation X limp their way back to the ring for the final segment. Triple H isn't amused by all of Austin tricks and none of it matters because he is still The Game. He reminds everyone that they took care of The Rock and Kane, so Austin is going to get his. Triple H dares Austin to come to the ring and face all four of them like a man. Austin, with a beer in hand, shows up on the stage to respond. Austin picks on the DX lackeys for falling for his traps and storms the ring. A net falls from the top of the arena and traps DX! Austin attacks but Triple H frees himself. The rest of DX break free and Austin is in trouble, but Kane returns to make the save! It gets even better as The Rock makes another late save and helps clear the ring of DX. GREAT way to end the show!

Final Thoughts: I enjoyed the entire show, which I can't say very often. This was a great episode of Smackdown in that every match served it's purpose and there were a series of segments that built up to a big crescendo at the end. Big thumbs up.