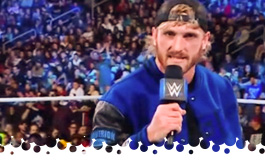 Live from Toledo, Ohio. Our hosts are Michael Cole and Wade Barrett.

Sheamus (with the Brawlin' Brutes) vs. Solo Sikoa (with Bloodline)

They aggressively lock up for a shoving contest. They trade snug blows, Sheamus gains control with a clothesline. Solo comes back with a spinning heel kick. Solo injures Sheamus' arm and drags him through the ropes for a hip attack against the stairs. Back from commercials, Sheamus looks half dead and takes a hip check in the buckles. Sheamus pops up for a surprise clothesline. He's got snot dripping from his nose but hits White Noise for 2. Solo targets the bad arm again and hits an avalanche Samoan drop! Sheamus kicks out! Sheamus counters with back elbows with his good arm and nails a power slam. Fans count along to Sheamus' clubbing blows to the chest. Sheamus hits a running knee, but Sami Zayn's distraction prevents a pinfall. The Bloodline bury the Brawlin' Brutes under the announce table! Sheamus hits a flying clothesline onto the Usos! Sami grabs Sheamus, allowing Solo to kick the bad arm and nail the spinning Uranage to win at 13:05! Physical match with an oddly exciting screwjob finish, ***¼.
Winner: Solo Sikoa

Bloodline aren't finished with Sheamus and wrap his bad arm in a chair for a series of brutal chair shots against the ring steps!

Video recap of last week's Rey Mysterio drama. He tried to quit and got talked into joining Smackdown, and instantly became the #1 contender to Gunther's Intercontinental Championship. Earlier today, Rey was greeted by Gunther's Imperium henchmen. Rey isn't looking for trouble, but does not appreciate the disrespect, and challenges them to a match.

Bray Wyatt talks to the camera while his new theme song plays in the background. He's still playing the part of Bray Wyatt: Real Life Human, and gets emotional talking about his personal problems. In fact, the music is a bit too loud, and I lose track of what he's saying, so this promo doesn't hit the same way that last week's did.

The Usos and Sami are jubilant while Solo stoically removes his tape. Sami puts Solo over as a gem and congratulates him for sending a message to the entire Smackdown roster.

Sonya is looking for revenge after Liv put her through a table in response to some mild criticism. Liv is leaning into a Harley Quinn-esque persona and thinks everything is very funny while controlling the early action. Backstabber by Liv, but Deville rolls through a backslide to hit a knee to the face. Liv laughs it off but Sonya kicks her to outside. Back from commercials, Liv escapes a routine chinlock. Liv rallies, none of her offense looks particularly good, but the fans like her. Sonya counters with a knee lift for 2. Hard Irish whip by Sonya, followed by tight kicks to the chest. Morgan asks for more, Sonya obliges. Liv goes crazy asking for more punishment and unloads with a double leg takedown. Sonya flees the ring, Liv bonks her into the announce table. Liv continues the assault and they're both counted out at 8:49. This match filled some time and lead to a productive angle, **.
No Contest

Liv continues to yuck it up while filling the ring with chairs. Liv hits a suplex onto a pile of chairs and smiles like she won the match.

Another spooky Viking video package. They beat some drums, burn some wood, and say cryptic things about pleasing their gods.

Braun Strowman comes to the ring and the fans love him for some reason. He calls out Raw's Omos and MVP, who are here for convenient purposes. MVP comes out for a rebuttal, and he's confident because Strowman is not the biggest, toughest monster for the first time in his life. Braun doesn't want to hear what MVP is saying and challenges Omos to a match at Crown Jewel. Ah, that will be awful, but that's okay because I won't be watching. Omos, in a nice suit, marches out to confront Mr. CYN. Braun is like "Well, you're not a tag team, but I'll fight you." Omos shoves Braun out while MVP pleads for order. And that's about it. If that's what the Saudi prince wants, let him have it.

Backstage interview with Drew McIntyre, who reveals that he got in trouble with WWE management for his part in trying to murder Karrion Kross. Don't worry though, because he'll face Kross at Crown Jewel in a cage match. Yes, keep loading Crown Jewel with matches I don't want to see, I won't be watching.

Logan Paul arrives backstage and it sounds like the fans still hate him.

Raquel and Shotzi ride in on a tank and I'd be lying if I said that wasn't hella cool. Raquel towers over Sky, but Sky reverses a chokeslam into a quick rollup. Kai ambushes Raquel with a quick kick, but Raquel hoists her into a standing Stretch Muffler and tags in Shotzi for a tandem neckbreaker! Shotzi hits a corner back senton, Sky assists, so Raquel throws her at Kai. Shotzi perches on Raquel's shoulders for a flying crossbody onto Damage CTRL outside! Raquel gets a late cover for 2. Raquel and Shotzi hit a Doomsday missile dropkick for only 2! They overwhelm Kai while Bayley makes a concerned face. Kai counters with a chinbreaker on on Shotzi, and Sky helps with a missile dropkick. Back from commercials, Shotzi fights off a double team and Raquel storms in on a hot tag. Sky disrupts a Vader Bomb and hits Raquel with a flying DDT for 2! Sky misses a moonsault and Raquel spins her with a lariat. Sky takes a tandem suplex, but Raquel inadvertently drops Kai onto them to break the cover. Bayley interferes to allow Sky to plant Shotzi for a moonsault to win at 10:14. Lively match full of satisfying action, the cheap finish doesn't really hurt this one, ***.
Winners and still WWE Women's Champions: Damage CTRL

Kayla Braxton is backstage with Smackdown Women's Champion Ronda Rousey. The live fans hate her. Ronda explains that she's issuing open challenges to prove she's the best, not to entertain the WWE Universe. I'm glad she's leaning into a heel persona, otherwise this might have been awkward. She'll issue the next open challenge next week so she can get the hell out of Ohio.

The broadcast is interrupted by cryptic Bray Wyatt goofiness.

Humberto Carillo enjoys a cold beverage in a luxurious lockerroom and talks about power. Zelina Vega chimes in that Legado Del Fantasma has no peers. The group enjoys a toast to the destruction of Hit Row. Meanwhile, Hit Row react to the video. B-Fab has an idea, but we'll have to wait until later to find out what that is.

Ludvig starts with an aggressive assault and nails a side headlock takedown. Rey comes back with an enziguri but flies into a right hand. Kaiser hits a penalty kick and poses. Rey fights back with a flurry of punches and hits a rana to set up 619, but Giovanni de Vinci interferes. Gunther hops up on the apron, but Mysterio hits Kaiser with a baseball slide. Kaiser responds with a lariat to send us to commercials. They return with Kaiser still enjoying the upper hand and milking it for all its worth. Kaiser misses a kick into the buckles, but he can't hit a superplex. Instead, Mysterio knocks him down for a flying seated senton. Mysterio's crossbody block gets 2. Rey rolls through a sunset flip and hits a springboard moonsault for 2. Rey gets caught up paying tribute to Eddie Guerrero, and Kaiser hits an uppercut. Mysterio answers with a super rana for 2. Kaiser attempts a counter powerbomb, but Rey sends him out with a rana, then misses a dive from the apron. Rey grabs a chair to fend off Imperium and plays dead to the ref tosses them out. Rey goes for a frog splash, Ludvig blocks, but Rey kicks out! Rey hits a rana to hit 619 and splashes Kaiser to win at 11:27! Really exciting match, the crowd ate this up, ***½.
Winner: Rey Mysterio

Logan Paul is here for the main event talking segment. He's happy to be back in Ohio, but half the fans still hate him. He talks to the “hard cam” about how dummies have been doubting him his entire life but look where he is now. He's really embracing the tweener role. Paul doesn't need an entourage the same way Roman Reigns does, because he has the desire to be the best. He states that no one expects some kid from social media to step in the ring with the GOAT and win, but what if he does win? He's interrupted by an ambush by Jey Uso, breaking Roman's orders to not engage with Paul. Jey hits a superkick to (what I'm guessing are) fake crowd boos. Sami Zayn rushes out to talk some sense into Jey. All this does is allow Logan to take Jey down with “one lucky shot.” The fans boo all of this while Sami is frozen with horror.

Final Thoughts: Good show, at least until the tone-deaf main event segment. It seems like everything Smackdown is setting up for Crown Jewel is awful, so I'm eager to get past it and see what they have in store for Survivor Series.