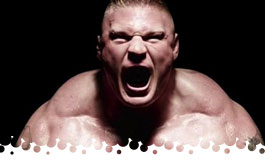 Live on FOX, from the Staples Center in Los Angeles, California. Our hosts are Michael Cole and Corey Graves.

We get a cold open and the updated stage looks fancy. Vince and Stephanie McMahon come out and welcome the fans to FOX and they cue up the new intro video, which manages to be snazzy and dorky all at once. The AC/DC theme song does feel a tad bit tired, but at least it's not Skillet.

Hey, it's Raw Women's Champion Becky Lynch! I can't think of a more fitting star to kick off Smackdown, seeing as they don't have their own Women's Champion or anything... Snide comments aside, Becky is mega-over and gets a great ovation from the fans. Becky puts over Smackdown and it's fans for helping raise her up and she's going to repay them by kicking some ass. She's interrupted by King Baron Corbin, who is the latest unfortunate soul to get saddled with a cheesy king gimmick after winning the King of the Ring tournament. Corbin thinks he should have been the first to kick off the show, and Becky dares him to fight. They are interrupted by none other than The Rock, who I'm sure we can all look forward to seeing appear week in and week out going forward in this great new era of Smackdown on FOX... oh, I'm getting word that we'll never see him again, so let's enjoy him while we can. Rock takes his sweet time soaking in the ovation on his way to the ring and reminds us that he first coined the phrase "Smackdown" and makes fun of Corbin for looking like a broke-ass Burger King on crack (crowd loves this). Rock says finally he's come back home (just like in 2011) and Corbin interrupts to say WWE isn't Rock's home anymore and should know his role and shut his mouth. Rock says winning KOTR doesn't make Corbin actually a king, so he shouldn't be walking around like a 35 year old virgin. For example, Becky Lynch is "the man" but isn't walking around holding a pair of testacles, and Lynch piles it on saying they'd be bigger than Corbin's. Corbin pleads that his testicles are reasonably sized and says he's the only true king in L.A. (take that, Lebron James). I think Corbin has finally found his calling as a loser who gets picked on by the cool kids. Rock admits that Corbin is a super tough dude and gets the crowd to chant "STD." Cute. Rock and Becky beat Corbin up together, complete with a Peoples' Elbow and Rock Bottom. Normally, I cringe when former stars show up to humiliate the current stars, but I can make an exception for Baron Corbin. This was fun and the fans enjoyed it, but now that it's over, Rock is still no longer there, Corbin still sucks, and Becky gets a mild rub.

The actual Smackdown Women's Champion Bayley and Sasha Banks are spotted talking strategy. Don't expect them to have any mic time tonight.

Bayley is EVIL now, but they haven't updated her music, entrance video, or the wacky, wavin' inflatable arm tube men, so we're getting some mixed signals here. Bayley cheap shots Becky on the apron, and Charlotte pounds on her for retribution. Sasha tags and delivers running knees to Charlotte's chest. Charlotte fights back with chops and big boots Sasha to ringside. Bayley shoves Charlotte off the top rope, which means it's time for a commercial break. They return from break just in time for Becky to get the hot tag and clean house. Bayley flapjacks Becky onto ropes, but Charlotte tags in to hit Natural Selection, but Sasha breaks the cover. Becky and Sasha brawl it out, until their partners break it up. Becky hits Sasha with a missile dropkick and Charlotte drops Bayley with a moonsault to ringside. Charlotte puts Bayley in the Figure 8 and Bayley taps at 8:17. Match was pretty average, but the Becky/Sasha hate elevated this down the stretch and the hot crowd helped them out, **½.
Winners: Charlotte and Becky Lynch

The New Day are interviewed backstage. WWE Champion Kofi Kingston is embracing his underdog role as he prepares to face Brock Lesnar later tonight. Big E and Xavier Woods are respecting Kofi's wish to go it alone, but shake their hips anticipating that Kofi will still be champion. If you had never seen New Day before and were just tuning in, this would probably seem pretty confusing.

Cole and Graves show footage of WWE stars enjoying themselves on the red carpet, and hey look, Mick Foley and Kurt Angle are in the crowd.

Universal Champion Seth Rollins comes to the ring to wrestle, but he's interrupted by the Firefly Funhouse Music and Bray Wyatt appears on the Titantron in his warped kid's show parody show, which quite honestly is the most interesting thing about WWE main roster programming these days. Wyatt's puppets act out what's going to happen in their match at Hell in a Cell, and needless to say the buzzard win via grisly decapitation. The problem here is that I think this is awesome, but anyone tuning in for the first time will likely be royally confused.

Hey, Hulk Hogan and Ric Flair are in the crowd! Less importantly, the bell rings and Seth gets a hot start with rapid fire suicide dives. Seth wastes time chasing off Sami, which allows Nakamura an opening. Seth avoids Kinshasa and delivers a sling blade. Seth hits a flying knee strike and superkick. Seth signals the curb stomp when all the lights go out. Seth bravely flees the ring and gets ambushed by Bray Wyatt on the stage. We can assume this is a DQ at 2:33. Bray puts Seth down with a mandible claw and disappears. Match was shaping up to be a complete squash before the non-finish, but the angle worked.
Winner via DQ: Seth Rollins

Recap video of the Kevin Owens vs. Shane McMahon feud. It looks like Owens has Shane over a barrel in some kind of lawsuit, but they've agreed to a loser leaves town stipulation in a ladder match. If we're going to bask in 90's nostalgia, we might as well have stipulations that have no chance of sticking.

Owens attacks Shane while he's being introduced as the Best in the World. Leave it to WWE to think that putting their best foot forward on a big new network means having Shane McMahon jump off something high. Owens positions a tall ladder for an early win, but Shane cuts him off. Owens misses a ladder throw and Shane ends up dropkicking it into his face. Shane sets Kevin on the announce table and beats him with a Smackdown sign. Unsurprisingly, Shane perches on the top rope for a flying elbow drop through the table and they cut immediately to commercial. Back from break, and Owens is alive and puts Shane through a ladder with a frog splash off the top rope! Owen's climb is interrupted by Shane's chair shots. Shane places Owens in the corner under a ladder and nails Coast to Coast! Shane climbs, but Owens pulls him off for a powerbomb through another ladder. Owens climbs and gets the briefcase for the win at 12:09! Shane is fired! The crowd LOVED this, but from what I saw this was a pretty run of the mill ladder match. But you know, ladder matches are like pizza, so when they're just okay, they're still pretty good, ***.
Winner: Kevin Owens

Owens rips off the classic McMahon "You're Fired" and puts Shane down with a stunner for good measure. It's good to see Owens get put over strong.

Kayla Braxton interviews Paul Heyman backstage. Heyman doesn't care what Kofi Kingston had to say, and cuts to footage from Raw, where Brock Lesnar put a hurting on not only Rey Mysterio, but also his son Dominic. Truth be told, that's a great angle, if (and that's a big IF) it means that Rey is being built up as an underdog opponent to Lesnar. Heyman has a spoiler: Brock Lesnar becomes WWE Champion again tonight.

Only Braun gets a televised entrance, which just makes everyone else look like a bunch of scrubs, including stars like Styles and Orton. Dolph starts and quickly hits Miz with a Zig Zag. Miz hilariously no-sells and hits Dolph with a DDT. Braun tags and plows through Dolph. Roode makes the save and the match breaks down with Skull Crushing Finales and RKO's breaking up the match. Braun laps around the ring, shoulder tackling anyone in his way. Braun challenges boxing champion Tyson Fury at ringside, and gets ambushed by Dolph, and throws him into Fury. The boxer doesn't take kindly to this and talks some smack. Braun slams Dolph for the win at 2:30. What a stunning waste of the talent involved, DUD.
Winners: Braun Strowman, Heavy Machinery, and The Miz

Tyson Fury is mad at Braun and security stops him from storming the room. At the risk of sounding ignorant, but am I supposed to know who this guy is? Seriously, is boxing still a thing in this country? The fans seem to know and care as they chant "Let them fight."

Earlier on Youtube, DJ Marshmallow pinned Carmella to become 24/7 Champion. Again, am I supposed to know who this is? Maybe I'm old and out of touch...no, it's the children who are wrong.

THE BIG DOG Roman Reigns is here, THANK GOD I THOUGHT WE MIGHT NOT SEE HIM TONIGHT! He gets tons of pyro, which actually warms my heart. Looks like he's in a lumberjack match, as the ring is surrounded by people I'd rather see in the ring (ie, Ricochet).

Daniel Bryan is on commentary, and I'm not sure if he's angrier at Reigns or Rowan. Bell rings and Rowan backs Reings into a corner for a beating. Reigns is served to the lumberjacks, who are happy to beat him up some more. Reigns returns and dumps Rowan, who goes out of his way to fight the lumberjacks. Roman's ambush backfires and Rowan tosses him into the guard rail, right in front of Smiley Green Shirt guy, who found his way here from AEW on Wednesday. Back to the ring, Rowan hits a roundhouse kick and CUE THE COMMERCIAL! Back from break just in time for Roman to break out of a Rowan massaging his temples. It's interesting to hear the fans respond warmly to Roman as he mounts his comeback. Reigns hits a Superman punch but both men go down. Luke Harper arrives on the scene and starts beating up lumberjacks. Roman hits a dive that wipes out most of the lumberjacks and Harper. Rowan powerbombs Ali onto Reigns, and wasn't Ali presented like a rising star not that long ago? Roman blocks the Iron Claw and nails another Superman punch, but Harper attacks in full view of the ref. Daniel Bryan dispatches Harper with a flying knee and Roman finishes Rowan with a spear at 8:50. This match could be described in a single word: dumb. But the fans liked it, so what do I know? *
Winner: Roman Reigns

The fans chant YES as Bryan and Reigns shake hands. The fans in the arena certainly seem to be enjoying this show more than I am.

Brock struts with his newly won title and is interrupted by Rey Mysterio and Cain Velasquez. Cain once won the UFC title from Brock, so Lesnar is properly scared to see his old rival. Velasquez tackles Brock and lands several punches before Lesnar retreats. Heyman thrusts the WWE title onto Brock and orders to "show him who you are" and Lesnar manages to save face. Velasquez stands tall as Brock opts not to return for another fight.