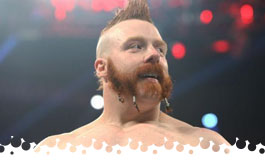 Live from Detroit, Michigan. Our hosts are Michael Cole and Pat McAfee.

The Exhilarating, Breathtaking, and Inspiring Ricochet vs. Happy Corbin

It's possible that Cole oversells Ricochet just a tad during entrances. Corbin doesn't look all that happy tonight, and it doesn't help when Ricochet immediately dumps him to ringside. Ricochet follows with quick dropkicks and a standing SSP. Corbin blocks a springboard attempt with a closed fist. Ricochet comes back with a springboard corkscrew press from the post. Back from commercials, Ricochet is holding on to the lead with quick attacks. Corbin cuts him off with a press slam onto the announce table. Ricochet tries a back handspring, but Corbin clotheslines the back of his head. Ricochet counters with a desperation DDT, giving them a breather. Ricochet reverses a chokeslam into a rana. Corbin answers with Deep Six for only 2. Ricochet misses a 450 splash, and Corbin hits a chokeslam for another 2. Ricochet uses a superkick to set up a Shooting Star Press and the win at 12:19! It's nice to see Ricochet winning matches, especially with a proper finisher and not through flukey roll-ups. I begrudgingly have to admit that Corbin carried out his end of the bargain rather well too, ***.
Winner: Ricochet

The Street Profits bump into Hit Row backstage. They're all about money and smoke, and take off together.

Next is a very special video package looking at the life and times of Drew McIntyre. They showcase his first run as the Chosen One, skip his 3MB (for reasons unknown), and his release. Later, we'll learn all about his redemption.

The show turns black and white as Karrion Kross (with Scarlett) mocks Drew's redemption arc in the balcony.

Shotzi Blackheart and Xia Li vs. Natalya and Sonya Deville vs. Doudrop and Nikki ASH vs. Tamina and Dana Brooke
The winners replace the injured Toxic Attraction in the Women's Tag Team tournament. Match gets off to a fast start with everyone rushing in to take turns hitting spots. Xia hangs Nikki on the ropes and tags in Shotzi for a tandem splash against the ropes. Tamina forces a tag, but Nikki hits Dana with a swinging neckbreaker. The match breaks down again with only 2:00 gone. Dana superplexes Nikki onto the others at ringside, and Sonya steals the pinfall at 3:12. This was booked like the final 3 minutes of a 20 minute epic, *.
Winners: Sonya Deville and Natalya

The Brawling Brutes come to the ring, unfortunately not to announce a stable name change, but for Sheamus to wrestle.

The Brawling Brutes are still in the ring, dressed up like extras from Peaky Blinders. Sheamus puts some disrespect on Gunther's name, which lures out the Intercontinental Champion and Ludvig Kaiser. Kaiser pisses the fans off by acting very European, and the not-at-all European Sheamus mocks him for confusing the fans. Sheamus runs down the list of big names he's defeated and congratulates himself for delivering bangers along the way. Gunther promises to chop Sheamus' chest into bloody bits and break his body. Butch and Kaiser start brawling while Gunther and Sheamus ignore them for a staredown. They hold their guys back without taking their eyes off one another. This was a certainly novel way to build up a match, and sure makes the IC title feel important.

Natalya and Sonya are interviewed about their "opportunistic" victory while Nikki ASH and Doudrop are seen arguing in the background.

Bayley, Dakota Kai, and Iyo Sky come out, presumably to watch (and interfere in) the Women's Tag Team Tournament match.

Sami Zayn pays a visit to the Usos. It appears he's buddy-buddy with Jimmy, but is getting on Jey's nerves. Roman Reigns invites Sami into their room for a word. Roman appreciates Sami for helping him out when he was alone last week. That's something family would do. Roman requests that Sami keep Drew occupied, and Sami is more than happy to oblige.

Natalya and Aliyah start with some chain wrestling and reach a quick stalemate. Aliyah uses a Matrix pose to gain an advantage, and Raquel helps clear Natalya and Sonya from the ring. Aliyah hits a Meteora from the apron, but Natalya gives her a Michinoku Driver on the floor. Back from commercials, Raquel is getting worked over in the heel's corner. She hits double suplexes and gets a 2 count. Fallaway slam on Sonya, but Raquel gets tripped on the ropes. Aliyah is MIA, so Raquel was attempting her own hot tag. Sonya applies a chinlock while the broadcast focuses attention on Bayley at commentary. Rodriguez slams Natalya while trapped in the chinlock and then snapmares Sonya onto her. Rodriguez makes a handicap match style comeback. Rodriguez powerbombs Sonya to win at 8:27, and Aliyah pops out of nowhere to join the celebration. This was a good showcase for Raquel, **½.
Winners: Raquel Rodriguez and Aliyah

The Maximum Male Models are unable to enjoy their photoshoot because SOMEONE is playing loud rap music nearby.

Public Service Announcement: a teenager wants to smoke, but Drew McIntyre talks him out of it. "That's a tag team partner for life.""

The Maximum Male Models are armed with spray paint and up to no good.

Kofi Kingston and Professor Xavier (Woods) are in the ring to talk. Xavier admits that they underestimated the Viking Raiders. They saw the Viking funeral last week in which boxes of Booty-O's and other merch were burned, and felt like their legacy was finished. Kofi seems to be teasing a disbandment, but is interrupted by the Viking Raiders in person. The Raiders are offended that the New Day are sniveling after they gave them a proper sendoff. The Raiders are ready to dismantle Kofi, but Xavier pops out of his wheelchair with kendo sticks, and they clear the Vikings from the ring!

The Maximum Male Models have spray painted "Hit Row Sucks" on a tour bus and are pretty pleased with themselves. Hit Row aren't impressed, but don't care because it's not even their bus. The Street Profits exit the bus and everyone scatters. I've enjoyed enough of the show tonight that this doesn't annoy me too much.

The Usos visit Sami, and Jey brings his mood down by demanding he handle his business in the ring.

Video package highlighting the redemption of Drew McIntyre. They retcon history to make it look like he returned as a babyface hero at Wrestlemania 35, and then I get chills as they show footage of him as WWE Champion in the Thunderdome. Drew promises to complete his destiny when he kicks Roman's f'n head off at Clash at the Castle.

Oh dammit, Drew has the stupid prop sword again. I truly thought that thing had been put to rest with Vince out the door, but here it is. The fans don't love Sami like Montreal did, and he stalls for time to start. Sami gains the higher ground, but Drew clocks him in the jaw. Sami resumes his Cat and Mouse game, but Drew manages to knock him into the announce table and ring frame. Sami kicks the bottom rope into Drew's groin and gains a cheap advantage. Drew comes right back with a tilt-a-whirl backbreaker. Sami rakes the eyes and hits a sunset powerbomb! Back from commercials, Drew is selling a leg injury and runs into Sami's boot. Tornado DDT by Sami gets 2. Drew hits a mean headbutt to buy some time. Drew rallies and hits some belly to belly throws. Neckbreaker by Drew, but the Usos arrive to distract him from the Claymore. Sami capitalizes with a Blue Thunder Bomb for a good nearfall. Drew forces a proper Claymore and wins at 10:23. Routine match, but it set the stage for the chaotic post-match beatdown nicely, **¾.
Winner: Drew McIntyre

Roman Reigns ambushes Drew from behind and gets booed for his sneak attack. Drew reverses a throw into the ring post, but the Usos jump him. Roman takes advantage and hits Drew with a spear. The Usos unload chair shots on poor Drew and this gets the right reaction from the fans (I don't *think* the heat is piped in, but who really knows). Sami helps with a Helluva Kick against the barricade and the Usos use the ring steps as a battering ram for the exclamation mark. It's too bad that Drew has no friends to save him, as Roman puts him into a guillotine choke and sits on top of him with his championships.

Final Thoughts: Last week's Smackdown was watchable, this week's episode was… really good. I know, I'm shocked too. There is a lot of good stuff happening here. Roman vs. Drew is an appealing main event. There are tag team feuds happening without the tag titles. The non-main event divisions are getting featured and the talent are getting mic time and character development beyond just walking to the ring with smiles on their faces. Lots of matches are being built up for the pay-per-view. This is a functional, entertaining wrestling show, that isn't doing anything groundbreaking other than just following a good, simple formula. I legitimately enjoyed myself tonight, Thumbs Up.