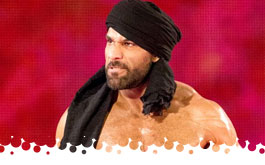 - Live from Providence, RI, it’s the go-home show for the 30th annual SummerSlam, the biggest party of the Summer, as they say. Tom Phillips, John "Bradshaw" Layfield, and Byron Saxton are at ringside to call all the action, unless otherwise noted. Advertised ahead of time for tonight is a Non-Title Match between John Cena and Jinder Mahal, as well as a match scheduled between Natalya and Becky Lynch, and A.J. Styles will apologize to Shane McMahon by the accidental Pele Kick last week when things got heated between himself and Kevin Owens.

- The Singh Brothers come out to introduce the Modern Day Maharaja, Jinder Mahal. Mahal tells us today is the Independence Day for India, so we must be having a celebration. He says his pride and strength comes from "his people", and we’ll also celebrate the reign of the greatest WWE Champion of all-time... himself. We get a celebratory, Punjabi dance, and we have someone in the ring to sing the anthem of India. Xenophobia is RUNNING WILD, BROTHER! Only wrestling ENCOURAGES people to BOO another nation’s anthem. Because THEY’RE DIFFERENT AND NOT AMERICAN. Wait, am I defending Jinder Mahal?! He’s going to beat John Cena more convincingly than Nakamura ever could, and he’s going to show Nakamura his destiny at SummerSlam is to lose to him. Shinsuke Nakamura finally interrupts, to the dissatisfaction of Mahal. Nakamura says today in Japan is the day they honor those who served in war, and at SummerSlam is the day Mahal loses the title to him. I’m not good with dates for that stuff, so I’ll accept it at face value.

It’s not like we haven’t seen this a million times in the last year. Anyone else find it weird that Becky and Charlotte were both left off the card at SummerSlam? I know with Ric Flair’s health scares at the moment, it’s a moot point, but even before that, nothing. Naomi and her Light Bright Belt come out for a front row seat. Becky with a side headlock and shoulder tackle. Crisscross and Becky with a rolling cradle. Natalya with a punch to the face, and Becky fires back with a series of forearms. Natalya escapes to the floor, but takes a baseball slide to the back.

We return from commercial break, with Natalya in control with an abdominal stretch. She’s nowhere near the ropes to get extra leverage, no doubt disappointing Mike Rotundo. Naomi on commentary is pretty terrible, constantly being fed questions that she gives short responses that lack any emotion or reason to get behind her. Becky comes back with kicks and an Exploder Suplex. Becky with a diving forearm for two. Natalya rolls through a Disarm-Her attempt and goes for the Sharpshooter, but Becky counters that too. Natalya with a school boy roll-up for two. Becky with an enzuigiri, but misses a flying leg drop, and Natalya finishes with the Sharpshooter at 4:12 (shown). Most of the match was during the commercial, but what was shown was perfectly acceptable. Natalya gets a solid win heading into SummerSlam.

- Post-match, Natalya continues the attack on Becky until Naomi chases her away in slow-motion. Carmella and James Ellsworth come out with the Money in the Bank CONTRACT to remind the world that she’s going to be at SummerSlam and you can never know what to expect. With how much they’re foreshadowing it, maybe I’ll change my prediction and say DON’T expect a cash-in this Sunday night.

- Tamina is backstage, yelling at Lana for the fact she doesn’t have a match tonight. Lana says she’s not ready because they don’t fear her... yet, but if she follows and listens, they will. Lana says she will use her ravishing beauty and cunningness to manipulate her way to getting what they both want. How is THIS angle not a Dumpster Fire?

- The Usos are backstage with Daniel Bryan. He jokingly says he can be the third person in their rap group. They want to know which members of New Day they’ll be facing at SummerSlam. Bryan says it’s going to be Big E. and Xavier Woods, with Kofi at ringside. Tonight, they want Kofi and Woods, and Bryan agrees. Well, isn’t that nice of him.

I keep forgetting they’re doing Rusev vs. Randy Orton at SummerSlam. Why not tuck that one away and save it for the next Smackdown Exclusive PPV... unless they plan on a rematch, in that case, meh. Yes, we did see Gable vs. Rusev only a couple of weeks ago, and it was a fun little match, so I’m not unhappy about an immediate rematch between them. Rusev quickly overpowers Gable with strikes in the corner. Whip to the corner, Rusev meets a boot, and Gable takes him over with a belly-to-belly suplex. Gable follows him to the floor, only to get thrown into the steps. He continues to slam Gable’s face into the steps and tosses him clear across the announcer’s table as we get a lame Double Count-Out at 1:17. He strips down the table and slaps on the Accolade. Randy Orton pulls a John Cena by not immediately helping the babyface in the distress. Rusev grabs the microphone for some taunting, but is met with an RKO (Out of Nowhere) by the Apex Predator himself. Better late than never, I guess.

- A.J. Styles comes out for his public apology to Shane McMahon. Throwing someone head-first through a car window? Deserves it. Accidentally hit with the Pele Kick? APOLOGIZE IMMEDIATELY. I get it, nobody wants Shane to screw them over out of pettiness, just funny to think about, especially with the choice to use a move you perform where you risk NOT SEEING THE PERSON YOU’RE TARGETING IN THE FIRST PLACE. Shane says there’s no need for an apology, because he was appointed special referee for that very reason: he’s able to take a hit and get back up to get the job done right. Shane says if it happens again, things we’ll be a little different. Styles wants to know if that’s a threat, because it sure sounded like one. Kevin Owens interrupts the festivities (and has ditched the "Face of America" ramp and color scheme). He sucks up to Shane and continues to try and stir the pot. Shane refuses a handshake and suggests he shake the hand of his opponent. Things get heated, and this time Styles inadvertent blow is blocked, only for Owens to accidentally hit Shane with a Super-Kick.

(Kofi Kingston & Xavier Woods vs. Jimmy & Jey Uso)
Non-Title Match. Usos theme song now has lyrics, and it is what it is. Which team will have momentum on their side heading into SummerSlam XXX? I’m surprised Woods was able to pry himself away from his Nintendo Switch, with Sonic Mania now available. Usos are kind enough to let the New Day do their pre-match gabfest. Kofi greets Jey with a boot to the midsection. Snap mare, kick to the face, and Woods with a sliding clothesline. They hit more rapid-fire offense, including elbows, leg drops, and a senton. Usos take a breather, but are met with synchronized baseball slides.

We return from commercial break, with Jimmy in control of a chin-lock on Kofi. Jey plants him with a pair of slams. Kofi slips through a third and connects with a back suplex. Woods with the hot tag, running wild on Jimmy. Super-Kick to the midsection and running dropkick across the back of the neck. Boot to the face of Jey and the Honor Roll (clothesline). He sends Jimmy to the corner, but gets sent to the apron and nailed with an uppercut. Jimmy runs into a roundhouse kick and gets both knees kicked from under him. Sandwich Super-Kick for two. Woods with the discus forearm on Jey. Jimmy counters Trouble in Paradise, but gets caught with a back breaker. Jey prevents the big elbow from the top, clips the knee, and the Usos hit a Double Super-Kick for three at 4:15 (shown). Good for what was shown, again, missing half the match due to commercial.

- The FINALE of the Fashion Peak Saga. Last week we found out Arn Anderson was responsible for the destruction of Tully (including a cute Horsemen reference) and Fandango was fine after being abducted... by aliens. There’s some new signs on their bulletin board, including a "Doppelgangers?" sign for Fake Razor and Diesel. Breeze is back in drag and needs them to get their heads back in the game. The Ascension make another appearance to return the awful pie they stole last week. Fandango combs through it and fines some hair, a used band-aid, and gluten! Viktor screams that gluten is the root of all evil while Konnor drags him away. There’s also a note that says "Two B." Fandango senses a dark presence that goes beyond the talent of the Fashion Police and will affect the entire division. "Breezango will return in 25 YEARS" .... Correction... "TWO WEEKS."

TV Main Event. Non-Title, of course. We should expect some kind of a run-in from Baron Corbin, considering he’s booked with Cena for SummerSlam and they’ve done nothing to promote that match all night long. Cena pauses to bask in the split-crowd chanting for and against him. They do a test-of-strength, with Mahal surprisingly getting the upper-hand. Cena fights free and comes off the ropes with a shoulder tackle. Mahal with a cheap shot in the corner, and Samir Singh gets one in as well behind the referee’s back. Cena gets tossed to the floor, playing dead.

We return from commercial break, with Mahal still in control. Cena comes back with his signature shoulder tackles and back suplex, but the Singh Brothers save Mahal from further punishment. Cena gives chase, only to get caught by the ankle coming back in. The referee sees it and justifiably ejects the Singh’s from ringside. Cena slaps on the STF, but Mahal doesn’t do jobs that easily anymore, and makes it to the ropes. Mahal escapes an AA attempt and hangs Cena across the top rope. Mahal with a running high knee for two. Cena counters the Khallas and hits the Attitude Adjustment for two! Oh my God, we’re in the era where Mahal gets to kick out of Cena’s finisher. Cena goes to the top and the Super-AA connects, but Corbin slides in for the Disqualification at 7:01 (shown). That was obvious. **1/2 At least Cena was capable of getting a decent match out of Mahal, unlike the challenger for the last three months.

- Post-match, Corbin bashes Cena with the Money in the Bank Not-a-Briefcase. Corbin sees Mahal in a compromised position and CASHES IN!

The bell rings, and John Cena recovers in time from moments ago to distract Corbin on the apron, allowing Mahal to come from behind with a school boy and THAT gets three at the 7-second mark. Wow... they just Damian Sandow’ed Corbin worse than Sandow. Corbin trashes things at ringside while Cena enjoys his failure.

Final Thoughts: SummerSlam is Sunday, so this episode did very little beyond being a 2-hour commercial, compared to Raw, which featured a handful of lengthy matches that could’ve passed for PPV quality, except for the robbing Corbin of the briefcase (to be fair, he wasn’t ready for the title). The Smackdown side of the card isn’t looking the best, but it’s lightyears ahead of what 2016 offered (Ambrose vs. Ziggler and a thrown together Women’s 6-Man Tag... and Styles vs. Cena, but we’ll ignore that one for the sake of the rant).