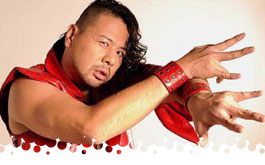 I'd say I'm surprised this is opening the show, but with a Cena/Nakamura Main Event, it only makes sense, especially if they do something that requires an immediate follow-up. KO has ditched his USA-colored attire. Aggressive lockup and Owens with a side headlock. Shoulder tackle for only a one count. Whip to the ropes, Owens hangs back to avoid a dropkick, and knocks Styles out of the ring with a forearm to the back of the head. Owens follows and lays him out with a clothesline as we take a break.

We return from commercial, with Styles sending Owens to the corner, but meeting a boot on a charge. Owens hits the ropes and gets nailed with a dropkick. Styles with chops in the corner, snap mare, and kick to the back. Jumping knee drop for two. Snap suplex for two. Styles with stomping in the corner. Whip is reversed, but Owens avoids the Phenomenal Forearm. Styles follows Owens out of the ring with a slingshot forearm that is mostly the same move. He charges forward, but Owens body presses him across the security barricade, and follows up with the Cannonball.

Back from another break and Styles unloads with the Phenomenal Blitz. Styles with a diving clothesline into the corner, followed by the Ushigoroshi for two. Owens blocks and counters a Styles Clash attempt with a back drop. Styles goes for the forearm again, but Owens avoids it and connects with a Super-Kick for two. Styles counters the Pop-Up Powerbomb with the Calf Crusher. Owens with a headbutt to escape. Owens avoids another charge and sets up for a Cradle Piledriver. Styles escapes and hits the Pele Kick, but another Styles Clash is blocked. Styles with the Calf Crusher again, but Owens makes it to the ropes. Owens with a pair of Super-Kicks. The referee gets whacked in a bit of a contrived spot. Styles counters a Pop-Up Powerbomb with a victory roll, and the blind referee, with Owen's shoulder up, counts three anyway at 10:29 (shown). **3/4 The two commercial breaks really hurt any momentum as a television viewer, but the last 4+ minutes was good stuff except for the finish. I'm sure we'll see more between these two.

- Shane McMahon and Daniel Bryan are backstage to let Mike Chioda he messed up. Kevin Owens is hopping mad, throwing paper cups everywhere. Shane offers him another rematch at SummerSlam despite physically assaulting the referee right in front of them. He wants a better referee, so Daniel Bryan appoints SHANE McMAHON the special referee for Owens vs. A.J. Styles. Please, don't give us a heel turn and another heel authority figure. At least it isn't Owens vs. Shane like originally rumored.

- Highlights from last week where the Usos ambushed the New Day, ruining their celebrating of their 3rd reign as Tag Team Champions (1st Smackdown Tag Titles). The Usos imitate the Usos introduction, and for a while, the crowd sings along until it finally hits them it's an Uso and not Big E. Usos entrance music now has vocals, for those keeping track. The Usos poke fun at the New Day being grown men riding tricycles and talking about each other's popsicles. They can keep their Booty O's, Ice Cream, and Socks, but they're taking back the Tag Team Championship.

- Fashion Peaks, the sequel to the Fashion Files, if you will. Fandango disappeared at Battleground following another mysterious attack. Tyler Breeze is working solo on the case, dictating his exposition to a recording device. The lights flicker and Fandango shows up with The Ascension. Konnor has a bottle of maple syrup and a log. "No wonder this show got canceled the first time." Enough with the metaphors! We find out he's been dreaming the whole time, except for the Fandango part, he's still missing. Somehow, that bizarre dream sequence leads to Breeze knowing who's behind the abduction. TO BE CONTINUED...

This should be a quick victory for Sami Wow-Wow. English with a long pre-match performance to get to the ring. Lockup and English grabs a side headlock. Whip to the ropes and he puts Sami down with a shoulder tackle. Zayn goes for a waist-lock, but English counters with a wrist-lock. Zayn counters and grabs a headlock. Whip to the ropes, springboard and deep arm drags into the arm-bar. Is that Sami Zayn or Ricky Steamboat out there? English counters into a cradle... and that gets three at 2:00!? What the hell just happened?!

- Maria and Mike Kanellis and their awesome entrance music come out to rub Zayn's loss in his face while English quietly disappeared from ringside.

Is the 30-day suspension for James Ellsworth up, yet? Seems like it should be. Natalya and Carmella are already in the ring while we get to enjoy Naomi's 5-minute entrance. I mean, when it's the only thing you're good at, might as well milk the f*ck out of it. Becky and Natalya start. Couldn't Carmella technically cash in the briefcase immediately before a potential pin-fall situation? Becky takes control with a hammer-lock, but Natalya hides in the ropes. Spinning Super-Kick to the midsection and drop toe hold into a front face-lock. Naomi in with a leg drop for two. Carmella in with a hard slap. Naomi responds with a dropkick and sliding slap. Natalya with a distraction, allowing Carmella to snatch her by her weave. Natalya with a cold chin-lock. Why cold? She did the old trick asking if the crowd likes Naomi, and nobody responded. Natalya with the Sharpshooter, but Naomi makes it to the ropes. Carmella in with the Code of Silence, but Naomi counters into her Crucifix Submission for the tap out at 4:51. *1/4 That was out of nowhere.

- Renee Young is backstage with Jinder Mahal and the heavily bandaged Singh Brothers. It doesn't matter who wins tonight's contenders match. It can be the Man from Japan™ or the American, because he's leaving SummerSlam with his WWE Championship.

I love how Gable keeps getting to work with all the singles guys who he could potential work programs with if they had confidence in pushing him. Gable goes for a waist-lock, but Rusev throws him off. He picks the leg, and again, Rusev tosses him. Rusev can't throw him off from another waist-lock, so he resorts to going to the ropes to force a break. Rusev tosses him to the floor. Back inside, Gable traps the ankle and gets Rusev on the canvas. He tucks the leg between the knees and drives it into the canvas before hooking a spinning toe hold. Rusev regains his vertically, drives a knee to the chest, and takes Gable over with a gut-wrench suplex.

We return from commercial with Gable taking Rusev over-head with a belly-to-belly suplex. He rolls through with it for another. Rusev escapes a third with a flurry of headbutts, but gets caught with a bridging German Suplex for two. Gable climbs the ropes, but Rusev pops back up. Gable kicks him off and lands on his feet doing a moonsault. Rusev meets the corner on a charge and Gable hits a moonsault on the second attempt for a near fall. Gable hooks a waist-lock for the rolling German, but Rusev counters and nails him with a roundhouse kick for two. Rusev circles Gable like a shark with blood in the water. Gable avoids the Accolade, sweeps the leg, and applies the Ankle-Lock in the center of the ring. Rusev kicks him off to escape, connects with another Super-Kick, and wastes no time applying the Accolade for the finish at 6:19 (shown). *** Not surprisingly this was good, but how competitive it was considering Gable hasn't won a match in forever.

- Post-match, Rusev complains he was promised competition and worthy opponents. They gave him Cena, but he did not beat Rusev, because nobody can beat him. He has no opponent for SummerSlam because everyone is afraid. Randy Orton returns from his Battleground exile to accept his challenge. Well, good for them, I guess. I have no desire to see any more Orton until 2019, but at least this can't be worse than the House of Horrors or Punjabi Prison.

TV Main Event, Dream Match™, and Contenders Match for Jinder Mahal's WWE Championship at SummerSlam. JBL makes comparisons to Hank Aaron going for HR #715... I don't want to be a jerk, but that record was broken, too, and it stands in the record books regardless of opinion over how "clean" it was. Cena tries a lockup, but Nakamura avoids him. Cena with the "You Can't See Me", so Nakamura rubs his eyes to play along. Lockup into the corner and Nakamura releases in his own unique way and gestures putting on a pair of glasses. Cena with a wrist-lock and Shinsuke counters with a side headlock. Whip to the ropes, crisscross, and Nakamura tells Cena to bring it. He unloads with kicks, including an enzuigiri, followed by Good Vibrations. Cena misses a charge to the corner, but powers out and drops Nakamura with a belly-to-belly suplex for two.

We return from commercial, with them trading blows. Nakamura with a knee lift and roundhouse heel kick. Whip to the ropes and Nakamura with a boot to the chest. He continues to dish out strikes. He sets Cena up across the top rope and hits the big knee to the midsection for two. Cena counters the Exploder and comes off the ropes with shoulder tackles. He plants Shinsuke with the back suplex, but the Five-Knuckle Shuffle is countered with a cross arm-breaker. That's what you get for showboating. Nakamura transitions into a Triangle Choke, but Super-Cena lifts him off the canvas into the fireman's carry. Shinsuke slides off the shoulders and drops Cena with the gourd buster. He sets up in the corner, but runs into a drop toe hold. Cena with the STF in the center of the ring. Nakamura escapes and goes for another arm breaker, but Cena stacks him up for two. Cena with a wicked clothesline. Nakamura with strikes and sliding knee. Cena avoids the Kinshasa and hits the Attitude Adjustment for a near fall. JBL makes another bad baseball reference. Shinsuke counters another AA with a guillotine sleeper. Cena powers out and hits another AA. He scoops Nakamura up for another, but it's countered with a brutal exploder, with Cena landing on his head. Nakamura with the Kinshasa, and that gets three at 9:51 (shown). ***1/2 This should've been on PPV and given 15 more minutes, but whatever, it was a good match, and Cena did a clean job.

Final Thoughts: Three good matches and only one bad segment? Can't really complain about that. SummerSlam is shaping up nicely, even if some of the choices are a bit odd. Smackdown Live is already represented with Nakamura/Mahal, Styles/Owens, Naomi/Natalya, and Orton/Rusev, and more than likely we're adding New Day/Usos and something with Cena. If they can produce a show with a combination good wrestling and angle developing segments on a consistent basis, maybe I'll look forward to watching every week.