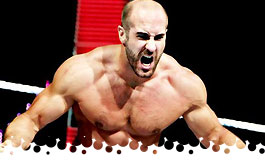 - It's time for the long-waited BRAND EXTENSION DRAFT. Remember how awesome it worked in 2002? Well, I don't because it's been so long, all I remember is when Smackdown became neutered and then they added "ECW", which was quite clearly a 3rd tier show. Anyway, the rules are in place for the Draft, and they are as followed...

- The show opens with Stephanie McMahon and Mick Foley out to represent Monday Night Raw, and Shane McMahon and Daniel Bryan for Smackdown. Stephanie makes sure to mock Bryan "pandering" to the crowd, then throws it to Foley who does his classic "mention the town" cheap pop. Raw's 1st Overall Pick: Seth Rollins. Smackdown's 1st Overall Pick: WWE Champion Dean Ambrose. Raw's 2nd Overall Pick: WWE Women's Champion Charlotte. Smackdown's 2nd Overall Pick: The Phenomenal A.J. Styles. Raw's 3rd Overall Pick: Finn Balor. Surprised that neither John Cena or Roman Reigns were picked, but also puts over the importance of the "new" talent. I'm guessing it'll go the same way each time for picks, with Raw getting the next pick, and then going back and forth until we have the 6th through 10th picks.

It only took us 12-minutes for someone to #BeatUpJohnCena. It's going to be Cena, Enzo, and Cass against the Club at Battleground on Sunday. Gallows quickly comes off the ropes with a shoulder tackle and we instantly go to a break... but the camera stays intact. Cena comes back with rights but runs into a boot. Whip to the corner and Cena sells it like death. He could take a lesson from Bret Hart on how to hit a turnbuckle with solid impact. Cena avoids a charge and goes for the AA, but collapses under the weight. Gallows comes off the ropes with a pair of elbow drops. Cena rolls away from a third and throws a sad dropkick. Gallows catches a body press attempt and hits what is basically the Big Ending, but only gets two. Cena comes off the ropes with a shoulder tackle, followed by the back suplex and five-knuckle shuffle. Gallows escapes another AA attempt and lays him out with a big boot. Enzo, Cass, Styles, and Anderson all hop in the ring, with the Club being tossed out. Cena with the AA, and that's enough for three at 5:26. * Just a teaser for the big Six-Man Tag for Battleground.

Preview for two different Championship matches at Battleground: Rusev defends the US Title against Zack Ryder, and the Miz defends the Intercontinental Title against Darren Young. Rusev takes a cheap shot at Ryder on the apron, then pounds away on Young. Miz in to put the boots to Young. Young comes back with an atomic drop and plants Miz with a slam. Ryder slingshots in with a splash for two. Whip to the corner, Ryder gets a knee up, but gets distracted by Rusev and pulled off the middle turnbuckle. Ryder with the back breaker and neck breaker for two. Rusev with a gut-wrench suplex. Ryder counters another suplex with a neck breaker. Young with the non-reaction hot tag, and unloads on Miz with clotheslines and an over-head belly-to-belly suplex. Young with the Gut Check, but Rusev breaks the count at two. Rusev with a gut-wrench suplex on Young. Ryder with the Rough Ryder on Miz. Young knocks Rusev out of the ring, allowing Ryder to hit him with a missile dropkick from the apron. Young with the Chicken Wing on the Miz, and he taps out at 4:08. That was a bit of a surprise, but it means Young is jobbing at Battleground. ½* Just a quick tag team match with little crowd heat for either of the future challengers.

Hey, it's another preview for Battleground, where the Wyatt Family faces the New Day in Six-Man Tag Team Action. This is starting to feel like an old Summerslam spectacular or something. Wyatt tries to freak Woods out, hanging back in the corner. Woods finally goes to make a move, but Wyatt counters and pounds away. To the corner and Wyatt with more punishment. Wyatt takes time to trash talk the rest of the New Day before planting Woods with a uranage. Wyatt comes off the ropes with a running senton. Woods catches him charging in the corner and unloads with rights, followed by a high knee. He freaks Woods out with the Spider Walk and quickly finishes with Sister Abigail at 4:45. That was... different. DUD I understand the story is that Woods isn't able to focus against Wyatt, but this was a bad five-minutes of actual wrestling.

- We're scheduled for Demon Kane vs. Kevin Owens. This is an interesting choice, to say the least. Owens makes sure to jaw-jack everyone for not picking him, yet. Suddenly, Sami Zayn comes out to brawl with Owens, and they find their way into the ring with Kane just standing around. Owens throws Zayn into Kane's grasp, but Kane also grabs Owens and plants both with a Chokeslam. Way to put over that new talent. No match.

Handicap Match and a preview for the Tag Team Match at Battleground where Sasha Banks will have a MYSTERY PARTNER. Speculate all you want, I'm sure it'll be Bayley. Last night on Raw, Charlotte and Brooke took advantage of a 2-on-1 situation with Banks. Banks starts with Brooke and quickly throws her into Charlotte. Banks comes off the apron with double knees on Charlotte, but Brooke comes up from behind to quickly end that celebration. Back in the ring, Dana Brooke with some "ground and pound". Banks with a takedown, sending her into the corner, followed by a pair of clotheslines. Dana Brooke blocks the Back Stabber, but the second attempt connects, and Sasha with the Bank Statement. Charlotte comes in to break it up, hits the Natural Selection, and covers for threat 2:19. Will we see the same result at Battleground?!

It's our first match that has nothing to do with any matches taking place at Battleground. I'm surprised. Jericho will be at Battleground though, to interview Randy Orton on "The Highlight Reel." No entrance for Cesaro. Crowd with a "Stupid Idiot" chant. Cesaro with uppercuts and a clothesline, sending Jericho to the floor. Cesaro quickly follows with a cannonball from the apron. Back in the ring, Cesaro comes off the top with a flying body press for a two count. Jericho blocks the Swing and cradles Cesaro for a near fall. Jericho goes for the Walls of Jericho, but Cesaro counters. Jericho with an enziguri for two. Jericho with a snap mare into a chin-lock. Whip to the ropes and Cesaro with a sunset flip, and they go back and forth for a series of near falls. Cesaro to the top rope but Jericho lays into him with chops and connects with a Frankensteiner for two. Cesaro blocks a Code Breaker and unloads with uppercuts. Cesaro counters the Lionsault with a second rope Russian leg sweep for two. Cesaro with the big swing, but Jericho blocks the Sharpshooter. Cesaro with the double stomp, but the Neutralizer is blocked, and a Code Breaker in mid-air finishes at 4:52. *3/4 Another rushed match. This feels like the Attitude Era with a bunch of matches running between 2-5 minutes.

- We come back from commercial with Natalya and Becky Lynch having their 67th pull-apart brawl since Extreme Rules. Or Payback. Whichever was the last Pay-Per-View/Network Special. They'll do battle at... wait for it... Battleground on Sunday Night.

- Back to the top of the ramp for the next round of picks. Raw's 13th Overall Pick: The Club, Luke Gallows and Karl Anderson. I guess that opens the door for rumors of a "Balor Club." Smackdown's 9th Overall Pick: American Alpha, Chad Gable and Jason Jordan! Raw's 14th Overall Pick: Big Show (crowd with a big groan for that one, and Shane with a classic "which was did he go?" line). Smackdown's 10th Overall Pick: Dolph Ziggler (no smart-ass comment). Raw's 15th Overall Pick: Nia Jax. So is Raw going to dominate the Women's Championship?

Last night on Raw, these two fought to an inconclusive finish, so we get the rematch right here. They brawl around the ring before the bell, with Ambrose getting sent to the post as we go to a commercial break. They finally start officially and Rollins with a quick near fall from a Falcon Arrow. Rollins with a knee across the throat and a boot to the back. Rollins with a hard whip to the corner and a back breaker for two. Ambrose fights out of a chin-lock, but gets dumped to the floor. Whip to the barricade and Ambrose backdrops Rollins into the time keepers section. Ambrose to the top of the announcers table, but he misses a dive. Rollins springs into the ring with a knee, followed by a boot to the face for a near fall. We return from another commercial (why leave the action going for Cena's match, but nothing else?), with Rollins still in control. Ambrose comes back with a clothesline out of the corner. Ambrose with his flurry of rights and lefts. Whip to the ropes and Ambrose with a roll up for two. Ambrose to the top rope, Rollins meets him with a boot to the midsection and a Buckle Bomb. Rollins to the top rope and the Frog Splash misses. Ambrose with la mahistral for two. Rollins blocks Dirty Deeds, Ambrose blocks the Pedigree and dumps him to the floor. Ambrose with a tope suicida. Ambrose to the top again with an elbow drop to the floor. Back in the ring, Rollins takes Ambrose off the top with a super-plex. Ambrose comes back with Dirty Deeds and retains at 12:16. **1/4 Too many commercial breaks made it a bit under-whelming, but the work was fine. A bit of a flat finish to close out the live Smackdown.

Final Thoughts: Take away the spectacle that was the Draft, the 1st episode in the era of Smackdown Live delivered what was a strong go-home push for Battleground, with almost every segment dedicated to building interest for an upcoming match. The wrestling itself wasn't the best, but that wasn't the story of the night. With the rosters finally split in two (again), it looks like Raw and Smackdown has potential moving forward, but only time will tell how they treat Smackdown. Will it be buried as the second-tier show again, or will there be a real effort in trying to raise the prestige of the program? And what does the future hold for HEATH SLATER?!