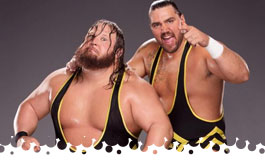 In case you're wondering why I am tackling this apparently random episode of Smackdown, especially five years into my hiatus from watching WWE TV on a weekly basis, it's because this is the first episode with Eric Bischoff as the Executive Director behind the scenes. Color me curious.

From the AT&T Center in San Antonio, Texas. Our hosts are Tom Phillips, Byron Saxton, and Corey Graves, and they're still buzzing about Braun Strowman and Bobby Lashley going through the LED wall on last night's Raw.

Kevin Owens hosts the Kevin Owens Show with his very special guests, Drew McIntyre and Shane McMahon! If I had to guess, I would say that Shane and Drew vs. Undertaker and Roman is going to main event Extreme Rules. Owens asks them to respond to footage of them fleeing the ring from Undertaker on Raw. Shane plays it cool, as he's feeling good about himself after beating Miz and Reigns, and nonchalantly makes their match No Holds Barred. Owens replays the footage of Shane and Drew rushing away from Undertaker and makes fun of them for hiding in the fourth row. Owens brings up Shane's loss to Taker at Wrestlemania and Shane appears ready for a fight, when Dolph Ziggler interrupts. Owens doesn't let Dolph get a word in and relentlessly mocks him for underachieving. Dolph says the only thing Kevin could win is a hot dog eating contest, which Owens is proud to own. Shane randomly decides that Ziggler and Owens should team up to face Heavy Machinery for a chance to enter a title match at Extreme Rules. In other words, 3 + 2 = 6, and don't question us because we're rolling in FOX money.

Xavier Woods and Big E are all smiles hanging out together, apparently not too upset about all the bad stuff that happened to them on Raw. They're asked about Shane's decision, and they seem pretty confident that they're regaining the tag titles at Extreme Rules.

Bryan goes for a waistlock that Big E escapes via dancing. Bryan tries some ineffective shoulder tackles and Big E catches him in an abdominal stretch with… spanking. This is turning into a parody of a pro wrestling match. Big E twists Bryan with a lariat and they head to commercial with the match continuing in a side screen. Bryan stalls for time before luring Big E into a Roman-Greco knuckle lock but punches instead. Big E is better at punching, so Bryan shoulder tackles the back of his knee and goes to work on the injured part. Big E comes back with belly to belly suplexes, but Bryan prevents a third suplex via headbutts and kicking the bad knee. Big E absorbs some Yes kicks and hits a third suplex on his way to delivering a big splash for 2. Big E misfires on a charge towards the ropes and bumps to the floor, but prevents Bryan's dive with a forearm. Rowan shoves Big E into the ring post and Woods makes the late save. Meanwhile, Bryan hits the flying knee for the win at 8:07. This started as a farce and ended as a solid, yet predictable formula match.
Winner: Daniel Bryan

R-Truth is interviewed backstage about his most recent 24/7 title loss to Drake Maverick. Truth rambles incoherently about his own honeymoon and demands his baby back.

Alexa Bliss asks Nikki Cross to host A Moment of Bliss for her tonight. Cross is overwhelmed by the offer, but Bliss thinks she'll be great, despite being socially awkward. I kind of like this subtly condescending heel role for Alexa.

Nikki Cross hosts A Moment of Bliss on the stage and is gushing over the opportunity and offers Alexa a heartfelt thank you. Nikki's very special guest is Smackdown Women's Champion Bayley, who is impressed that Alexa is sharing the spotlight. Nikki tries to defend Alexa and takes exception to Bayley suggesting that she's merely doing her bidding. Nikki is upset that Bayley has called Alexa a liar and dragged her name through the mud. Bayley stirs the pot saying it's unfair that she's facing Alexa at Extreme Rules and not Nikki. This frazzles Nikki who challenges Bayley right here and now. I continue to like this angle.

Bell rings and Nikki walks right into a dropkick. Bayley aggressively throws punches and dominates with a hard Irish whip. Nikki counters an armbar with a chinbreaker, but Bayley stomps her into the corner. Nikki desperately leaps on Bayley's back and manages a basement dropkick and flying crossbody for 2. Nikki's running bulldog is good but but Bayley counters a tornado DDT. The Belly to Bayley suplex ends this at 3:09. This was a good little sprint.
Winner: Bayley

WWE Champion Kofi Kingston is strutting around backstage throwing pancakes at passerbyers. He seems to be in a pretty good mood for someone who was beaten and humiliated 24 hours ago.

Ali cuts a promo in the parking lot. He is aiming to bring change and become WWE Champion.

Kayla hosts an in-ring confrontation between WWE Champion Kofi Kingston and Samoa Joe. Joe dismisses Kayla right away or else she might become collateral damage. Joe accuses Kofi of using his New Day cohorts to get ahead. Kofi defends his recent resume, claiming he did it all by himself, and calls Joe out for his recent losses and playing hide and seek. Joe responds by insulting Kofi's family, which Kofi admirably no-sells. This seems to get under Joe's skin and he challenges Kofi to simply shake his hand. Kofi thinks about it but flips him off instead (a well placed camera angle blocks the bird from TV viewers). Kofi hits Trouble in Paradise and stands tall. No joke, this segment was fantastic. Kofi got to look defiant, intelligent, and likeable, while Joe got to get himself over as mean, menacing, and determined. I actually want to see their match at Extreme Rules now.

Heavy Machinery are interviewed backstage. They're not all that concerned about their match with Owens and Ziggler tonight because they love each other so much.

Hey, did you know that Braun Strowman and Bobby Lashley went through the LED wall on Raw? Well, if you missed it and the other 327 replays, let's take a look at it! To be fair, it actually goes somewhere, as we see footage from Twitter of Bobby Lashley reacting to the incident. He accuses Braun of putting them both through the wall on purpose but feels satisfied knowing that Braun got the worst of it. Lashley vows to send that “son of a bitch” to the morgue.

Andrade (with Zelina Vega) vs. Apollo

No entrances for either guy. Andrade attacks Apollo before the opening bell and quickly hits the Sea of Shadows for a nearfall. Apollo recovers with a moonsault off the ring apron! They continue wrestling through a commercial break on the side screen. Apollo hits a slingshot senton for 2. They come back from break with Apollo press slamming Andrade off the turnbuckles and hitting a standing moonsault. Andrade manages some sort of back elbow shot but Apollo catches him in a crossbody and drops him hard on the ring apron. Zelina interferes with a rana on Apollo! Andrade capitalizes with a Hammerlock DDT for the win at 5:45. Good TV match from two guys who don't appear to be going anywhere.
Winner: Andrade

Kevin Owens pays Dolph Ziggler in the locker room to strategize for tonight. Dolph just wants Kevin to sit back and let him steal the show. Kevin suggests that they could actually make a good team and what's the harm in trying? Dolph agrees to be professional and shakes hands with Kevin, so long as he stays away from hot dogs.

Ember Moon looks determined on her way through the back and Carmella randomly offers her good luck.

Aleister Black cuts a promo in a shadowy, nondisclosed area. He talks a lot of gibberish about fighting an unnamed opponent in the seven layers of hell. Basically, he's issuing an open challenge for Extreme Rules. They rushed this guy out of NXT for this?

Sonya provides an instant distraction and Rose tries to steal a quick win with kicks and punches. Rose applies what might seriously be the worst looking chinlock in history and Moon powers out to hit a flyin Codebreaker. Moon's Eclipse ends it at 2:12. This was pretty bad.
Winner: Ember Moon

Shelton Benjamin is asked about his thoughts on the WWE Championship match at Extreme Rules. He just grins and heads out without saying a word. Is this Bischoff's doing?

The winning team will be added to a triple threat Tag Team Championship match at Extreme Rules. Bryan is ranting and raving on commentary about how everyone involved is unworthy of being in the title match while Otis and Ziggler feel each other out. Tempers flare at commentary and Rowan dumps New Day's pancakes everywhere and chokeslams Woods through New Day's own commentary table. They take a commercial break and the match restarts with Owens squaring off against Tucker, who shows off some surprising agility. Owens and Ziggler play subtle heels as they isolate Tucker. Owens blunders by mocking Otis and allows Tucker to surprise him with a flying crossbody. Otis gets the hot tag and runs wild through Ziggler. Dolph saves himself with a DDT and Owens returns with a superkick. Otis dumps Owens and blocks Dolph's Zig Zag. Otis hits the Caterpillar (fat guy Worm) on Dolph, who then misfires a superkick on Owens, allowing Heavy Machinery to put him down with the Compactor at 9:14. This was a good TV match, keeping a lively pace and nicely putting over some fresh faces.
Winners: Heavy Machinery

Kevin Owens is outraged over the loss and superkicks Ziggler.

Final Thoughts: This was seemingly a pretty typical episode of Smackdown that didn't make any big waves. There seems to be a better effort to give more members of the roster something to do, and that's always a good thing. Mild thumbs up, mostly because there were no 2/3 falls matches.