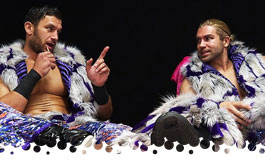 - Smackdown Live episode #930 is live from the Smoothie King Center in New Orleans, LA. Tom Phillips, John "Bradshaw" Layfield, and Byron Saxton are calling the action, unless otherwise noted. We're less than a week away from Money in The Bank, so expect a lot of last minute shilling for all the matches scheduled for the event. Advertised for tonight is a Six-Man Tag Team Match featuring the participants of the Money in The Bank Ladder Match.

The New Day & Breezango vs. The Usos & The Colons:

Eight-Man Tag Team Action to kick off Smackdown Live. New Day get played down to the ring by local musicians. You must feel bad for American Alpha when they're on the sidelines while the Colons continue to get television time 7 years after their expiration date. Breeze says the Usos Day One is G... for Gross. The Colons didn't trash their office, but they're going to trash them. Kofi and Epico start. Big E is the outside man for New Day tonight. Epico with an elbow to escape a waist-lock and comes off the ropes with a shoulder block. Crisscross and Kofi with a diving elbow for two. Woods with a sliding clothesline and elbow drop for two. Fandango comes off the ropes with a spinning head scissors. Whip and a sunset flip, but Fandango blocks and drops the leg for two. Breezango with a double elbow drop for two. Breeze gets caught in the corner and Jey connects with a midsection Super-Kick. The Usos and Colons take turns pounding on Breeze until Primo hooks a chin-lock. Breeze escapes with elbows and connects with an enzuigiri. Woods in for an assisted head-scissors splash for two. Basement dropkick for two. Primo comes back with chomps and stomping in the corner. Woods gets a boot up in the corner and hits the Honor Roll (clothesline). New Day and Breezango team up for dropkick spots to clear the ring.

We return from commercial (they do split-screen), with Epico in control of a surfboard on Breeze. During the break, Jey nailed him from the apron with a roundhouse kick to the back of the head. Epico with a somersault senton for two. Usos with their less-impressive version of the Demolition Decapitation for two. Jey with the running hip attack in the corner for two. Breeze escape a chin-lock, but Epico cuts off the tag attempt and takes him over with a delayed suplex for two. Epico with a tilt-o-whirl back breaker and cheap shot to Fandango. Breeze fights off a double team from the Colons and somehow got Primo to DDT his partner in a bit of a contrived spot. Woods with the hot tag, running wild on Jimmy Uso. Whip and Woods with a somersault plancha to the Colons. Kofi springboards in with a sledge and hits the Boom Drop. Jimmy ducks Trouble in Paradise, but the second attempt connects for two, broken up by Jet. Fandango takes Jey out with a clothesline. Primo misses the Back Stabber, and Woods hits a double stomp across the knee of Kofi for three at 11:06 (shown). *** Take away the chin-locks and the stupid DDT spot, and this was entertaining and one of the few times they actually delivered a beefed up tag match without short-changing it on time. New Day pinning The Colons leaves some question for the finish at Money in the Bank.

- "Free Agent" John Cena returns on July 4th, because only in WWE can you make up the rules of a game as you go along, and hope nobody questions it.

- Sami Zayn gives his usual dork pep-talk to A.J. Styles and Shinsuke Nakamura. How can someone booked so well in NXT be booked so poorly on the Main Roster? That's a rhetorical question.

- Mojo Rawley is stewing backstage over his failed opportunity last week, but WOO WOO WOO, Zack Ryder shows up to give him a pep-talk of his own. The Hype Bros have some unfinished business, further adding speculation of mine for a potential heel turn in the tag team division.

Non-Title Match. Dear God, please be short. Last week on Smackdown Live, Tamina pinned Naomi with a little help from Lana. Just like the Colons, Tamina has been around forever and I don't recall her doing much of significance. Lana arrives before the match to... I don't know, just shake her stuff? Lockup into the corner and a clean break. Naomi pounds away as we get a mild "We Want Rusev" chant. Tamina shrugs Naomi off and connects with a headbutt. She tosses Naomi by her weave and hooks a chin-lock. Naomi comes back with a pair of roundhouse kicks, but Tamina mostly no-sells and drops her with a short clothesline. Tamina with a hip attack, a popular move for south pacific Superstars. Tamina with another short-clothesline for two. We're at the three minute mark and already into our third chin-lock spot. Sloppy transition into the corner, and Naomi still hasn't learned to master the timing of slapping her leg for the kick. Diving body press is caught and Tamina with a modified uranage for two. Tamina goes to the top, but Naomi knocks her silly with a kick and the split-legged moonsault finishes at 5:07. ¾* It wasn't short enough.

- Post-match, Lana attacks Naomi from behind and plants her with the Hammerlock Sit-Out Slam (I hate when moves don't have goofy gimmick names, so I have to awkwardly call them based on description). Lana poses with the belt (it's a belt, WWE, A BELT), so expect her to lose at Money in the Bank unless she's suddenly become a person of Indian heritage.

- WWE Champion Jinder Mahal and his undersized lackeys come out for some last-minute hype to the WWE Championship Match with Randy Orton. Did you know Money in the Bank is taking place in St. Louis, Orton's hometown? Mahal demands everyone pay respect to their WWE Champion. He's going to prove Orton is nothing but a coward and that he's afraid of disappointing his friends and family in St. Louis. He seems sure that Bob Orton will be watching front-row ringside Sunday to watch his son lose. Crowd chants U-S-A in a sad attempt to drown out the portion of his promo spoken in Punjabi. Orton finally comes out to interrupt, sneaking in through the crowd, and here's a shock, hits Mahal with an RKO Out of Nowhere™.

- Kevin Owens, Baron Corbin, and Dolph Ziggler have their own pep-talk in the locker room. Owens says he likes Dolph more than Corbin, but that's not saying much. They have two options tonight: Work together and complement each other's strength, or they can go out there, Baron can punch him in the face, Dolph can kick his head off, and they can walk into the Ladder Match worse off than they are now.

- Renee Young meets Randy Orton backstage for comments. He just said everything he needed to say. The time for conversation is over, and this Sunday, he's taking back the WWE Championship in his hometown.

More "Superstars Building Momentum" for Money in the Bank. Since they're now allowed to call Charlotte by her full name, why not call Natalya by hers as well? Charlotte with a waist-lock into a snap mare and cradle for a one count. Becky Lynch is watching backstage, a staple of WWE programming. They trade holds until Natalya snaps her back with a handful of hair.

- The Fashion Files: Sweet Victory. Fandango is checking himself out in the corner, looking forward to show himself off with Breezy in the Big Easy... but where is Breeze? Someone has knocked him out, and he's still wearing the Romper. The bulletin board has a picture of Sami Zayn that reads "generic" and "needs a mask." He says the attackers were monsters with greasy hair and dry skin... and one arm. No, two arms. Fandango's sketch is two stick figures, but it rings a bell. My best guess is it's a heel turn for American Alpha. Remember, they started off in NXT as a team as heels, so it's not out of the realm of happening.

- Dasha Fuentes meets up with Lana backstage for comments on Money in the Bank. Lana doesn't care what she or the entire WWE Universe has to say about her, and on Sunday, she's going to shock the world when she CRRRRUSH Naomi to become the Ravishing Smackdown Women's Champion.

TV Main Event. Entrances alone will eat up about 10-minutes of television time. The match started during the commercial break, and we join it with Ziggler in control of a wrist-lock on Nakamura. Nakamura rolls through to counter, takes Dolph over with a snap mare, and drops a knee across the chest. Good Vibrations in the corner. Dolph catches him on the chin with an elbow, followed by a dropkick. Owens comes in and stomps away. Corbin comes in and does more of the same. Shinsuke escapes a chin-lock, but Dolph throws him down by the hair. Styles tags in and comes off the ropes with a forearm. Diving clothesline into the corner, followed by a pump-handle gut buster. Ushigoroshi connects for two. Zayn and Owens go at it, with Zayn tossing him to the floor and following out with a somersault plancha. Styles Clash is countered with a DDT for two. Corbin plants Zayn with the Deep Six for a near fall.

We come back from commercial, with Dolph in control of Sami with a chin-lock. Zayn fights free, but runs into an elbow. Owens' senton is countered with double knees. Owens cuts off a tag attempt and lays Zayn out with a DDT. Zayn slips off the shoulders and hits the Blue Thunder Bomb. Corbin cuts off another tag attempt and charges into the corner with an avalanche. He comes off the ropes again, but this time Zayn lays him out with a clothesline. Zayn fights off all three opponents, but Owens and Dolph sweep Styles and Shinsuke off the apron to prevent the tag. Styles with a forearm to Corbin from the apron, and Zayn hits him with the Helluva Kick for three at 9:19 (shown). Post-match, ladders get involved, with Shinsuke Nakamura standing tall at the end, so we know he's not winning Sunday, either. *** Another good match, but this one could've used a bit more television time.

Final Thoughts: Not the strongest show (and the ratings definitely proved that one), but there's hardly a track record of outstanding go-home shows in the modern era. They did a decent job of showcasing all the matches scheduled in one form or another, but I wouldn't be surprised if something is added last minute to fill out the card. With two good tag matches, this was better than normal for recent episodes of Smackdown in the wrestling department, but the lukewarm reactions all night from the crowd really makes you think.