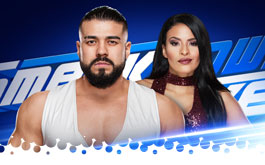 - Presented LIVE on the USA Network from the 02 Arena in London, England. Tom Phillips, Byron Saxton, and Corey Graves are calling the action, unless otherwise noted.

- Renee Young is in the ring to kick things off with an interview with Daniel Bryan. He's disappointed in his loss last week to Rusev (so was Dave Meltzer based on how butt-hurt he was on Twitter), He said he's not going to take the loss well and vows to scratch and crawl his way back to the top of the mountain. Big Cass interrupts, burying Bryan for losing to Rusev last week. He also claims he tapped out immediately at Backlash to cheap-shot him afterwards. Cass mocked the Yes chants, so Bryan attacked him, targeting the leg. He wraps the leg around the post, clipped the knee, and hooked a knee-bar with Cass frantically tapping out. I guess he DOES have heat for going against script with the little-person on the go-home episode before Backlash?

The winning team will be granted ONE spot in the Men's Money in the Bank Ladder Match. This is basically a rubber match after The Bar split matches with Xavier Woods (and in the process split his tongue last week). The Miz joins the commentary team for this one. Woods and Cesaro start. Woods knocks Sheamus off the apron and hits him with a tope con hilo. Back inside, a springboard roundhouse kick to Cesaro gets two. Cesaro blocks a victory roll and carries Woods into the corner. Sheamus tags in and hits him in the air with a double axe-handle for two. Whip and The Bar with a double clothesline. [Commercial] We come back with Woods still getting worked over. Sheamus with a knee to the face for two. Woods dumps Cesaro over the top rope with a back drop and hot tags Big E. He throws Sheamus over-head with a pair of belly-to-belly suplexes. Sheamus brings up the knees to counter a splash. Charge to the corner is countered with a uranage for two. Sheamus with a roll-up for two. Cesaro saves Sheamus from the Big Ending and they plant Big E with a double DDT for two. Cesaro has a hard time turning Big E over with the Sharpshooter (paging Botch-a-Mania). Meanwhile, Woods sends Sheamus into the post and makes the save. Woods tags in and plants Cesaro with a DDT for two. Woods with an inverted Code Red for two. Big E hits Sheamus with a spear through the ropes and Woods hits Cesaro with the rope-walk elbow drop for three at 9:25. The last few minutes would've made for a great finish to a 20-minute PPV match.

- The Bludgeon Brothers are hanging out in a cloudy room, putting down all the other tag teams through subtle comments like "family is weak" (New Day) and "joy is a disease" (New Day).

- Paige's phone conversation with Carmella is interrupted by Mandy Rose and Sonya Deville. Rose gloats about her victory last week and assumes it qualifies her for Money in the Bank. Paige says both will be in a Qualifying Match tonight when they take on Becky Lynch in a Triple Threat Match. They can still work together! WE JUST HAD A MATCH WHERE A THREE-MAN TEAM EARNED 1 SPOT!

- Renee Young is backstage with A.J. Styles. He's facing Shinsuke Nakamura tonight in a Non-Title Match and the winner gets to pick the stipulation for their match at Money in The Bank. Styles says it can be an Inverted Scaffold Match, Pole on a Pole Match, or a Bull-rope Hell in a Cell Inferno Match. I don't think he's taking things seriously.

The Smackdown Live debut for the former NXT Champion. I've never paid close attention, but his hometown is Gomez Palacio Durango, Mexico. I'll set the over/under for bell-to-bell action at 2 ½ minutes. Lockup and Almas escapes a waist-lock with a rolling elbow. Constantino surprises him with a dropkick and gets the skin slapped off his chest for it. Almas puts the boots to him in the corner and hits the Drive-Thru Knees. Hammerlock DDT finishes at 1:20. Was this a Money in the Bank Qualifying Match? I think it should count. Post-match, Zelina Vega is unimpressed with the opponent chosen for Almas after all the weeks of hype. They didn't come here to play nice, they came to take over.

- Rusev and Aiden English are backstage in a private room. Rusev says that it could be better and English blames it on being England. English says he has a song ready for Money in the Bank when Rusev wins the Ladder Match. Before he can give us a sample, Lana interrupts to continue and drive a wedge between Rusev Day. Next week, Lana announces she has a Qualifying Match against Billie Kay. That needs to be a 90-second nothing match.

- Carmella is here for her "Mellabration." These segments, along with Contract Signings, need to f*ck off. She's introduced by the town crier borrowed from Lower Uncton, and they've sprung for some Royal Guard costumes. Since I'm burying the segment, is Carmella the worst wrestler to hold a Women's Title in recent memory? Alexa Bliss is OK, but she's not nearly as bad as Carmella. When you have a GLOW level match with Charlotte Flair, it's a good sign you suck. Paige interrupts (thank you, God). Paige informs her that she's defending the Women's Championship at Money in the Bank... against Asuka. Oh my God, they're jobbing Asuka to Carmella, aren't they?

- Renee Young continues to be over-worked, interviewing Shinsuke Nakamura. He's back to playing dumb about the English language. "What does chance mean?" He says Renee is using the wrong words. "I am will win. A.J. Styles will lose. A.J. Styles will get the knee to face."

Winner earns a spot in the Women's Money in the Bank Ladder Match. We've already covered the illogical method to set this up, so let's move on with the match and play stupid. Poor Mandy and Sonya have to fight each other! Drat! The stats for Deville says she lives with best friend, Mandy Rose. Um... someone forgot to check their Instagram. Becky dumps Rose to the floor and sends Deville into the turnbuckle. Becky with the springboard kick in the corner. Rose returns from the dead to help pound Becky to the canvas. Rose with a slam and Deville with a sliding knee to the ribs. Rose tries to roll Deville up, unsuccessfully, leading to an argument between BFF's. [Commercial] We come back with Deville the only woman standing. She unloads on Becky with kicks. Becky comes back with clotheslines and a jumping heel kick. She takes Deville over with the Exploder Suplex but meets a boot in the corner. Rose dumps Deville to the outside and steals a pin attempt for a two-count. Becky counters a suplex with a small package for two. Rose blocks the Disarm-Her and hits the double under-hook face-buster. Deville pulls her off and covers Becky for two. Mandy has Deville on her shoulders and Becky wipes them both out with a missile dropkick. Becky with the Disarm-Her on Rose. Deville breaks it up and hits a sliding knee for two. Rose knocks Deville out with a pump knee and Becky makes Rose tap to the Disarm-Her at 7:57. Just a match.

- Next Week: Samoa Joe vs. Big Cass and Billie Kay vs. Lana in Money in the Bank Qualifying Matches. Those don't seem too impressive. What's with the heel vs. heel matches?

Non-Title Match, with the winner getting to pick the stipulation for their next match at Money in the Bank. How many commercial breaks will there be to ruin this match... I'll set the odds at 2 ½. Do we count the one during entrances? Lockup, Styles with a snap mare. Nakamura hooks the arm for a wrist-lock but Styles quickly counters. Nakamura cartwheels into another counter and rolls Styles up for two. Styles with a victory roll of his own for two. Nakamura with a straight boot to the midsection and some disrespectful slaps. He hits the ropes and Styles meets him in the middle with a dropkick. Styles with strikes in the corner. Nakamura blocks a suplex, driving a series of knees into the chest. Styles answers with a back breaker, sending Shinsuke to the floor for a breather and Styles follows with a slingshot forearm. Shinsuke bails out again and catches Style with a sliding knee on the apron. Back inside, Nakamura covers for a one-count.

We come back from commercial with Nakamura choking Styles across the middle rope. They move to the corner, where Nakamura gives him BAD Vibrations. Because he's a heel. GET IT? Styles with chops but his comeback is cut short. Nakamura's reverse exploder is countered with an elbow across the back of the neck. Styles misses a clothesline and Nakamura lays him out with a running one-foot dropkick for two. Nakamura hooks a dragon sleeper as we replay that last spot a couple of times. Styles escapes with a knee to the top of the head. Nakamura sets Styles up across the top rope for a super-plex but Styles slides between the legs. Nakamura boots him in the face and Styles responds with the Pele Kick. Styles with the Phenomenal Blitz and the sliding forearm. He charges into the corner with a jumping clothesline. Nakamura slides off the shoulders to avoid the Ushigoroshi but gets planted with a sit-out face-buster for two. Nakamura forces Styles into the corner to avoid the Styles Clash. They go through a series of counters until Nakamura hits the spinning heel kick and a sit-out Michinoku Driver for two. He sets Styles up in the corner but rams his own knee into the turnbuckle. Nakamura counters the set-up for the Phenomenal Forearm and hits the running knee lift on the second try. They fight it out on the apron. Nakamura with a straight boot and flying knee. He pulls Styles back in the ring and covers for two. Styles counters the Kinshasa and Nakamura escapes the Styles Clash. Ushigoroshi connects for two. Nakamura with a sliding knee for two. He sets up in the corner and Styles surprises him with a spinning heel kick. Nakamura dumps Styles to the apron to avoid the Styles Clash. Shinsuke sidesteps a Forearm, almost letting the referee take the bullet. He sells a phantom nut-shot to distract everyone, takes Styles over with a reverse exploder, and finishes with the Kinshasa at 17:30. Great TV match with little commercial interruption.

Final Thoughts: Most of the build for Money in the Bank centers around the qualifying matches. Nakamura beating Styles seemed like the obvious move, but I'm surprised they are holding off announcing the gimmick (watch it be Last Man Standing. Just watch). Another new match for the card is the randomly booked title defense for Carmella against Asuka (watch them job Asuka to her. Just watch). It should be interesting to see where they go with Daniel Bryan moving forward, having once again humiliated Big Cass. Andrade Almas debuted but it's too soon to get a read on what he'll be doing (my guess is getting the US Title off Jeff Hardy, who was conspicuous by his absence this week).