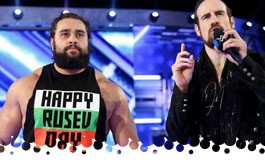 - Backlash is officially in the books and we can all agree it wasn't a good show.

- Presented LIVE on the USA Network from Baltimore, MD. Tom Phillips, Byron Saxton, and Corey Graves are calling the action, unless otherwise noted. Tonight, the Road to Money in the Bank (For Smackdown Live) begins! Jeff Hardy faces The Miz, Charlotte Flair goes one-on-one with Peyton Royce, and Daniel Bryan meets Rusev in Money in the Bank Qualifying Matches.

- Smackdown Live General Manager Paige comes out to kick off this week's show. Hopefully she doesn't run down the same list of matches the announcers just talked about. How can Backlash be the first co-branded PPV? GREATEST ROYAL RUMBLE WAS LAST F*CKING WEEK (and let us not forget Rumble, Mania, SummerSlam, and Survivor Series). She tries to put over Backlash, but boy did that show suck.

Jeff Hardy vs. The Miz:

This is a MITB Qualifying Match, so Hardy's United States Title isn't on the line. We see highlights of Miz's 2010 Briefcase win and cash in (complete with the mean-mugging girl) for the sake of it. Why is the briefcase already hanging over the ring? Lockup and they fight over a waist-lock. Whip to the ropes, Hardy with a shoulder tackle and splash for two. Miz bails, so Jeff follows, running the barricade and hitting him with a leg lariat. Back inside, Miz quickly backs away from a teased Swanton Bomb. [Commercial] We come back with Hardy taking Miz over with a pair of arm drags. Hardy's jaw breaker is countered and Miz drops him with a straight boot for two. Hardy with elbows to fight out of a chin-lock. Miz quickly cuts off the comeback with his signature back breaker and neck breaker combo. Hardy avoids the Skull Crushing Finale and wrecking ball dropkick but can't block being straddled across the security barricade. Hardy continues to battle and comes off the barricade with a plancha. Back inside, Jeff with the inverted atomic drop, double leg-drop and basement dropkick for two. Miz blocks the Twist of Fate and they fight over a back slide. Hardy hits the Twist of Fate on the second try (what is with people taking it like the Stunner). Miz rolls away from the Swanton Bomb tease and hits a hangman's neck breaker across the barricade.

We come back from our second commercial break (this time it was with split-screen action), with Miz in control with a sleeper hold. Hardy breaks free with a jaw breaker. They slug it out from their knees. Hardy with a Russian leg sweep and double leg trap cover for two. Miz with an elbow to the midsection and another sleeper, but this time Hardy uses his momentum to break it in the corner. Whisper in the Wind gets two. Hardy sweeps Miz off his feet on the apron and knocks him to the floor with a baseball slide. Hardy follows with a somersault plancha. Miz prevents the Swanton Bomb again, this time straddling Hardy on the turnbuckle. Hardy fights off a Super-Plex attempt and hits a sunset Powerbomb for two. Hardy counters the Skull Crushing Finale with a victory roll for two. He knocks Miz into the corner and hits the Hardy-ac Arrest. Hardy hits his second Twist of Fate and the Swanton Bomb connects, but Miz counters the pin attempt with a crucifix roll for three at 20:14. That was a bit of a surprise finish. Good match, but two commercial breaks hurt the momentum. ***

- Sheamus is backstage, eating Lucky Charms. "Why?" "They're the only thing that makes me feel better for losing to Xavier Woods last week." Makes sense. Cesaro implies that if they switched places, he would've won regardless of the 2-on-3 disadvantage. Cesaro and Sheamus check their bags to find them both filled with pancakes. "I HATE PANCAKES!"

- Renee Young is backstage looking for comment from Shinsuke Nakamura. She lets us know he isn't cleared to compete tonight. Is this issue with A.J. Styles over? "No... speak English." Young calls him out, so he says he's forgotten to speak it, even though he said the entire sentence in English. OH MY GOD, Heel Nakamura rules.

- Carmella cuts a cell-phone promo. "I beat Charlotte Flair." That sums it up. She's going to celebrate next week in London, England when Smackdown Live goes International.

- Naomi cuts a cell-phone promo about you-know-what. She cheated to win the Women's Battle Royal at WrestleMania, so maybe she'll cheat to win this match, too.

Women's MITB Qualifying Match. Will Charlotte slip on another banana peel before doing another job? Billie Kay credits the expression on Charlotte's face after losing for curing her Uncle's life-long stutter problem with uncontrollable laughter. After all the trash talk, they start with a basic collar-elbow lock-up. Flair with a pair of waist-lock takedowns. She tosses Peyton with a fall-away slam and throws her to the floor. [Commercial] We come back with Charlotte selling on the floor, having been sent into the post. Back inside, Peyton grabs a chin-lock. Um... shouldn't this hold been applied DURING the commercial? Charlotte escapes with a jaw breaker. Peyton flips out of back suplex and sends Charlotte crashing into the turnbuckle. She controls with choking in the corner and wrapping Charlotte up in the ropes. Charlotte escapes another chin-lock and puts Royce down with a neck breaker. Whip to the corner and Flair with chops. Both women miss their big kicks and Charlotte rolls Peyton up for two. Charlotte goes for the Figure-Eight, but Peyton rolls to the floor. Charlotte follows, hitting Kay with a plancha. Royce with a swinging neck breaker on the floor. Back inside, she covers for a near fall. Billie Kay hangs Charlotte up behind the back of the referee and Royce hits a spinning heel kick for two. Charlotte misses it in the corner and hits the running boot. Royce gets the knees up to counter the moonsault for another two-count. Knee to the face for two. Charlotte blocks the Fisherman Suplex and hits the Spear for two. They do a few roll ups until Charlotte applies the Figure-Eight for the tap-out at 12:53. An average match with a strong finish (and yet would've been a better match than most of what was on Backlash). **1/2

- Dasha Fuentes meets up with Daniel Bryan for comment on his match tonight. He's fighting through the pain from Big Cass' attack because he's going for the Money in the Bank briefcase.

- Shelton Benjamin with another one of those you-know-whats. He says he made Money in the Bank famous (minus winning one).

- Asuka's promo isn't even a selfie! It still has the dumb Sesame Street captions.

Quasi-rematch from last week, with Cesaro out to prove last week was a fluke. If I were writing Smackdown, I'd have Sanity debut and beat up all five to put them over strong. Cesaro easily escapes a waist-lock and shows Woods up. Crowd chants "we want Pancakes", so Big E tosses them around, pissing Cesaro off. What is this, a rib on the beach ball incident? Crisscross and Woods takes Cesaro over with a spinning head scissors. The referee almost gets bumped, buying Cesaro an opportunity to nail Woods from behind with a clothesline. Cesaro with the gut-wrench suplex as we take a break. [Commercial] We come back with Cesaro working on an abdominal stretch. Woods escapes and hits Cesaro with a series of kicks and a knee strike. Woods with the roundhouse kick from the apron, followed by a springboard knee for two. Woods with an inverted Code Red for two. He goes to the top for the elbow, but Sheamus creates a distraction, allowing Sheamus to roll him up for two. Woods with a roll-up and Shining Wizard. Big E launches pancakes at Sheamus. Woods walks the rope but leaps into an uppercut, and that puts Woods down for three at 7:06. Can we take a break next week from Xavier in singles action?

- Renee Young is backstage with A.J. Styles, who is sporting a nasty bruise on his cheek. He says he stooped to Shinsuke's level at Backlash, especially with the WWE Title on the line. "I guess Shinsuke speaks English, again." If he has the guts to get back in the ring, he'll finish him. Shinsuke may be the King of Low-Blows, but this is the house that A.J. Styles built.

- Someone has been messing around with what look like crude dolls of the teams in the Smackdown Tag Team division. It's the Bludgeon Brothers, the reigning Tag Team Champions of Smackdown.

This was set-up last week when Rose and Deville mocked Becky for costing her and Asuka their match against the IIconics and tried to suck up to Paige, who pronounced Absolution dead. Uh-Oh, Becky is in a "slump", according to Tom Phillips. Paige bans Sonya from going to ringside. Rose has her own music and I'm blinded by the gold and filters. Corey Graves channeling his late 90's Jerry Lawler (PG version) is kind of annoying, not going to lie. Lockup and Becky with an arm drag. Rose with boots in the corner. Whip across the ring and she connects with a dropkick. Rose with a running knee strike for two. They get into a slugfest, won by Becky. She goes for the Disarm-Her but Rose gets to the ropes. Becky with an Exploder Suplex. Rose counters the springboard dropkick and cradles Lynch for three at 2:24. Yup, losing streak gimmick for Miss Lynch.

- Next Week: NEW DAY vs THE BAR. Winning team has one person represent them in the Money in the Bank Ladder Match, Carmella's Celebration, and the debut of Andrade "Cien" Almas!

The second (Men's) Qualifying Match for Smackdown representatives in the Money in the Bank Match. Bryan fights for a wrist-lock but gets caught with an elbow on the side of the head. Crisscross and he trips Rusev up and sets up for a modified surf-board. Rusev escapes a wrist-lock with a scoop slam. Rusev charges and goes flying over the top rope. Bryan hits the ropes and goes for a tope suicida, but Rusev blocks the move and hurls him across the announcer's table.

We come back from the break with Rusev taking Bryan over with a suplex. Whip to the corner, Bryan flips over the charging Rusev and comes off the ropes with a clothesline. Bryan hits the running corner dropkicks, selling the ribs. He scoops Rusev up and sets him across the top turnbuckle for a super Franken-Steiner. Bryan with his signature Yes-Kicks. Rusev ducks the roundhouse and goes for the Accolade, but Bryan escapes and rolls him up for two. Rusev with a roundhouse kick to the shoulder for two. Rusev goes for the Accolade again but he's selling a left wrist injury. Rusev quickly makes it to the ropes to avoid the Yes-Lock. Bryan with a series of kicks, including the roundhouse. He sets up in the corner but English pulls Rusev to safety. Bryan hits them both with a wrecking ball dropkick and comes off the apron with a knee on Rusev. Back inside, Bryan comes off the top with a missile dropkick. Rusev counters the running knee and hits the Machka Kick for tw... wait, THREE? At 12:20. Huh. Didn't see a clean finish with Bryan losing. This was perfectly acceptable but a bit disappointing.

- Post-match, Daniel Bryan hangs his head in shame. He was due for a loss, but I honestly expected a Big Cass run-in.

Final Thoughts: They aren't wasting time going all in with the Money in the Bank hype. Three of the four matches determined participants for ladder matches at the CO-BRANDED Pay-Per-View, and for the most part, it was an enjoyable show. There's not a whole lot of deep storylines going on, so using qualifying matches as a crutch is a good way to fill a few weeks (see also: The Cruiserweight Tournament on 205 Live leading into WrestleMania 34).