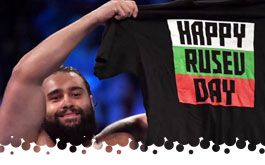 - WWE Champion A.J. Styles comes out to kick things off. You can tell a lot about a man through his failures, and we know all we need about Shinsuke Nakamura. He failed at WrestleMania and showed his true colors. He's not just an artist, he's a con-artist. Last week, all he could think about was retribution, but he was presented with a "real" Dream Match™ with Daniel Bryan, a match that Shinsuke ruined. He's not letting it go and won't leave the ring until he confronts him. Instead of Nakamura, out comes Aiden English and Rusev, heeling it up. So, is Rusev a heel this week? Styles says since it's Rusev Day and Nakamura doesn't have a spine, he wants to fight right now.

Rusev quickly puts the boots to Styles. He misses a charge and gets taken over with the Calf-Crusher, but English makes the save, drawing the Disqualification at the 27-second mark. Post-match, Daniel Bryan runs in to help even the odds. He tosses Rusev out of the ring while Styles lays waste to English with the Phenomenal Blitz. I think we're getting a tag team match later.

- Shane McMahon and Paige are backstage for some exposition. Paige books A.J. and Daniel Bryan against Rusev and English, as expected (in honor of former GM Theodore Long).

Time for a new beginning for Shelton Benjamin, with Chad Gable moved to Raw with zero fanfare. Benjamin says the good things he said about Chad Gable were false, and that his Twitter account was hacked. "I never needed Chad Gable." Randy Orton comes out for the match. His competition isn't someone from Raw? Orton's music cuts off, and out comes JEFF HARDY instead. That's better. Benjamin puts the boots to Hardy and tosses him to the floor. [Commercial] We come back with Hardy taking Benjamin down with a modified neck breaker. Whip is reversed and Hardy connects with a clothesline. Hardy with the inverted atomic drop, double leg drop and basement dropkick for two. Benjamin avoids the Twist of Fate and straddles Hardy across the top rope. Benjamin climbs up as well, but Hardy knocks him down. Benjamin pops back up, hitting Hardy with a knee. Hardy fights out of a super-plex attempt and finally hits Whisper in the Wind for a near fall. Benjamin comes back with a spinning heel kick for two. Hardy blocks the Pay-Dirt, hits the Twist of Fate, and finishes with the Swanton Bomb at 8:20. Would've been better without the commercial break (we got split-screen action, but I'm not into that anymore).

- The Miz is standing by with a cell-phone promo. He addresses Daniel Bryan's tweet about wanting to #PunchHisFace, directed at The Miz. That's not happening tonight because he's in LA with his family. Miz promises the Premiere of The Miz on Smackdown Live... NEXT WEEK. If Bryan ever trolls him on Twitter, he's going to kick his a--- and Maryse cuts him off for using language in front of the baby.

- Sonya Deville and Mandy Rose are the newest members of Smackdown Live.

I feel like we've seen this match recently, unless it was Jimmy going one-on-one with Harper. Harper muscles Jey into the corner and hits him in the ropes with an elbow. Jey with a midsection super-kick and uppercut. Jimmy prevents Rowan from interfering. Jey tries a suicide dive, but Rowan catches him. Jimmy saves with a Super-Kick, but Harper lays Jey out with a lariat for three at 0:53. Dude, what's with these matches? Jimmy uses one of their mallets to try and help his brother, but they keep no-selling like they're 1984 Road Warriors. Naomi comes out to prevent the teasing of assault with a deadly weapon, begging for mercy with such little believability. Way to make Jimmy and Jey look like wussies.

Who honestly remembers Sin Cara is still on the roster?! Joe on Smackdown Live is something I can get behind. Sin Cara moves in fast, but Joe shrugs it off and tosses him in the corner. Sin Cara with a springboard elbow but Joe quickly regains control with a flurry of jabs and a big chop. Sin Cara tries clipping the knee. Joe counters the springboard with a clothesline to the back of the head, followed by a series of knee strikes. Joe with the Coquina Clutch for the submission at 1:34. Short and sweet.

- Post-match, Samoa Joe calls Smackdown Live "The Land of Handouts." Everyone has had it easy before he arrived, but he's here to change all that, and he's going to get all the opportunities. He segues into a promo on Roman Reigns and seems to forget what Championship he's challenging for in Saudi Arabia.

- SANITY is coming to Smackdown Live!

- Renee Young catches up with Daniel Bryan backstage. She asks him why he helped A.J. Styles earlier. He says out of respect. He made a list of Superstars to help motivate him, and at the top of the list was A.J. Last week he wanted to prove he hasn't lost a step, but Shinsuke Nakamura ruined that moment. The promo is cut short by a returning BIG CASS, who makes sure to point out the height difference between them.

- The ‘Mellabration is on, as Carmella celebrates winning the Smackdown Women's Title from Charlotte Flair last week, thanks to a lengthy attack from the IICONICS (yes, double I for whatever reason), Billie Kay and Peyton Royce. She shuts the crowd up for trying to start a "You Deserve It" chant. She can't help but hide her jubilation beating Charlotte, without giving credit to the assist. She beat the woman that ended Asuka's undefeated streak. We get a video montage of Carmella being Ms. Money in the Bank. She names the women's title "Cleopatra." Charlotte Flair interrupts to remind us that she only got the briefcase because of a chinless freak, and for a beatdown from Royce and Kay. Kay and Royce interrupt the interruption to mock Charlotte some more. Charlotte gets ganged up on until Becky Lynch makes the save.

Match is Joined in Progress. Charlotte works Kay over on the floor. Charlotte leaps back into the ring but gets laid out with a forearm for two. Kay with more strikes before hooking a variation of the arm-bar. Charlotte rolls through to escape but gets laid out with a clothesline and stacked up for a near fall. Kay with another arm-bar as Graves defends previous cash ins to shut Saxton up. Royce with a cheap shot from the floor as we take a break. We come back with Charlotte coming off the ropes with a high knee. Kay ducks a clothesline and takes Charlotte over with a suplex for two. Charlotte with a series of chops and a knee across the back of the head. Kay counters a neck breaker with Eat-Defeat for two. School boy roll-up for two. Charlotte with the running boot and Figure-Eight for the tap-out at 7:58 (shown). Post-match, Carmella lays Charlotte out with the Women's Title. The beatdown is on until ASUKA makes the save. They lost the crowd sometime during the last commercial break.

- Cellphone promo from Sheamus and Cesaro... and now they're on Smackdown Live. The New Day have choice words about it until running into R-Truth. Well, they all can't be winners. R-Truth and Tye Dillinger share an awkward stare-down before doing a ridiculous handshake. R-Truth still thinks he's on Monday Night Raw, though.

- Andrade "Cien" Almas and Zelina Vega are coming to Smackdown Live, too. OH MY GOD. SMACKDOWN IS GOING TO BE AWESOME.

TV Main Event. I don't think the result is in doubt. The real question is how will Shinsuke Nakamura factor into the finish, if at all? Bryan and English start. Lockup to the corner, Bryan avoids a cheap shot and goes to work on the left arm. Whip to the ropes and Bryan with a shoulder tackle. Crisscross, Bryan picks the leg in mid-air and traps English in a modified surfboard while Styles comes off the top with a double axe-handle. English gets some token offense in but gets taken down with a pump-handle gut-buster. Rusev runs in but gets taken down.

We come back from commercial, with English working over Styles. English with a snap mare and knee to the back before hooking a chin-lock. Styles escapes but gets taken over with a back drop. Rusev in to apply a bear-hug. Rusev drags Styles back to his corner to avoid letting Bryan into the match. English with an avalanche and Rusev drops Styles with a lariat for two. Styles with a jaw breaker on English, followed by the Pele Kick. Bryan finally gets the hot tag and runs wild on Rusev with rights. Whip to the corner, he flips over a charging Rusev and comes off the ropes with a clothesline. Bryan shakes the ropes like a Warrior and hits the running corner dropkick. He goes for the Yes-Lock, but English makes the save. English gets dumped out. Bryan with a Dragon screw leg whip on Rusev, followed by the Yes-Kicks. Bryan with the running knee, meanwhile, Shinsuke shows up and hits A.J. Styles in the junk AGAIN. Bryan checks on Styles and turns around, only to be met with a big boot from Big Cass, drawing the Disqualification at 12:35 (including a commercial break). It wasn't that good of a match, so nothing was really ruined.

- Renee Young tries to get a word from Shinsuke Nakamura, who again says he doesn't speak English.

Final Thoughts: Adding Samoa Joe, Jeff Hardy, Andrade "Cien" Almas, Sanity, Asuka, The Club, Sheamus and Cesaro, among others, is going to make Smackdown Live an interesting place going forward. Tonight was more about introducing the roster changes, so I'm going to hold off from being overly critical over the questionable booking (cough:Usos:cough) and look forward to the future.