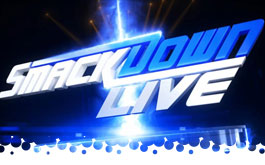 - Smackdown Live Episode #919 is live from the Richmond Coliseum in Richmond, VA, with Tom Phillips, John "Bradshaw" Layfield, and David Otunga calling the action. It's the final show before WrestleMania: THE ULTIMATE THRILL RIDE, and promoted ahead of time is a battle between Luke Harper and Bray Wyatt. We can expect a lot of last minute pushes to all the big matches taking place on the 33rd WrestleMania.

- Daniel Bryan comes out to open the show, because we have a signature of Smackdown Live to kick things off... a CONTRACT SIGNING, between SD Live Commissioner Shane McMahon and the self-proclaimed Face That Runs the Place™ A.J. Styles. The motivation of Styles' character actually makes me less mad about being in a match with non-wrestler, potato-throwing machine, Shane O'Mac. Crowd seems pro-Styles, although he does get a bit of heel heat. McMahon talks about his vision for Smackdown Live, and that Styles was always part of that vision because he's without question, one of the greatest talents to step foot in a WWE ring. Styles agrees with that assessment. Shane says that Styles' ego got in the way of his success, and cost his Championship when he lost to John Cena, and lost his Mania spot to headline WrestleMania. Shane says A.J. needs to dig deep down like everyone else, because nobody ever expects much from him, after all these years. Styles kind of gives him a stink eye and reminds him this isn't a Hell in a Cell Match, a Falls Count Anywhere Match, but a match where if you are outside the ring for 10 seconds, you lose. If you use a table or ladder, you get DQ'ed. This is a TRADITIONAL Match, and when Shane gets in the ring at WrestleMania, you enter the world of A.J. Styles. The contract is signed and the table gets shoved aside for our obligatory face-off with Daniel Bryan standing between them. He ask them to shake hands, but Styles blows him off.

Did you know that the Women's Title will be defended at WrestleMania (Kick-Off Show) in an undetermined stipulation? Mickie James and Women's Champion Alexa Bliss are on commentary for the match and bicker with each other over broken promises. Carmella quickly hides in the ropes and passes her gum to Ellsworth, and he puts it in his mouth. Yum. Carmella chokes Becky across the middle rope and slams her down for only a one count. Becky with an enzuigiri that misses by a mile, but Carmella sells it anyway. Mickie and Alexa get into it on the floor and take it into the ring, and I guess we have a No Contest at 2:30... but wait...

We return from commercial, and we have a TAG TEAM MATCH! Teddy Long would be proud of such on the spot decision making. Mickie is teaming with Becky and Alexa with Carmella. Mickie takes Bliss over with a snap mare and comes off the ropes with a basement dropkick for two. Becky in with a snap leg drop and elbow drop for two. Bliss forces Carmella in, quite literally, and yells at Ellsworth for being annoying. Mickie with a roundhouse kick to the midsection and a boot to the face. She takes a shot at Alexa, allowing Carmella to nail her with a left forearm. Bliss tags back in and hooks a front chin-lock. Micki escapes and rolls her up for two. Bliss with the "standing on the hair and pulling the arms" spot that I still have no idea what to call officially. Mickie escapes another chin-lock with a roll up for two. Natalya's music plays as the action screeches to a halt and we take another break.

No, Natalya hasn't randomly added herself to the match, as the 2-on-2 tag continues. Yes, THREE SEGMENTS now, so you know we're stretching things thin this week with THE ULTIMATE THRILL RIDE only five days away. Bliss meets an elbow in the corner and Mickie takes her over with a spinning head scissors. Mickie with a Hangman's Neck Breaker and hot tag to Becky. She hits Carmella with a pair of clotheslines, jumping heel kick, and an Exploder Suplex. Becky with the diving forearm into the corner, followed by a springboard side kick. Natalya hops on the apron to create a distraction. Ellsworth trips Becky up, and Carmella with an Oklahoma Roll for three at 5:40 (shown), not including the time of the singles match. Post-match, all five women brawl until Naomi makes her triumphant return from a 5-week hiatus and cleans house. She declares her name for the WrestleMania Women's Title Match, and of course, in her return from a knee injury, DOES A HURRICANRANA ON THE RAMP. Logic. * Match wasn't much to write home about, but it was clearly designed as filler since we're on the go home show.

- Tyler Breeze, still dressed as Nikki Bella, tells Daniel Bryan "she" wants to be in the Women's Title Match too, but Bryan denies the request and offers both Breeze and Fandango a showcase in a 10-Man Tag featuring guys in the 4th Annual Andre the Giant Memorial Battle Royal. FILLER!

- The Miz and Maryse come out for another special edition of Miz TV, featuring the FINALE of the Lost Episode of Total Bellas (Bull S***). This time around, "John Cena" and "Nicole" have dinner guests in the form of "Brie" (also Maryse) and "Daniel Bryan" (Miz, with a goofy beard, walking around on his knees like he's Mel Brooks in Spaceballs). Brie flashes a wedding ring to the dismay of Nikki, and Daniel Bryan says he can't eat steak because he's vegan and it hurts his tummy. Brie puts a bib on him and gives him a juice box. "Cena" has some mighty shoulder padding to fill that blazer. "John" asks Nikki to make him the happiest man... and take his rules seriously. "Nikki" proposes to him instead as we leave with a TO BE CONTINUED... right after this commercial break.

When we return, "John" says I do... not want to marry you, because it will damage his brand. His motto of Hustle, Loyalty and Respect stands for Hustle: To Hustle fans into thinking he's something he's not, Loyalty to himself, and he Respects money. When he says "Never Give Up", that's a reminder that if gives up his spot, a more talented worker will take it, like when the Miz and Maryse embarrass them at WrestleMania. They finally break character, and my girlfriend seems puzzled why I blurted out "Miz has a better body than I realized." They call out John and Nikki. The only kids Nikki will have with John Cena is when he's hosting the Kid's Choice Awards. John Cena and Nikki Bella interrupt, with Cena calling Miz out for being a not-too-friendly word that begins with the letter "P". He laughs off the segment because he's John Cena and he can never take things seriously I guess, until he wants to cut a serious promo, then he takes it seriously again. He questions why Miz and Maryse don't have kids, or if Miz lacks the functioning tools to produce to begin with. Then Nikki ruins it. For a proposed match that seemed to have little promise... the build-up has been quite entertaining.

Sad news to report: The Smackdown Live Tag Team Championship will not be defended at WrestleMania, with all these men, even the top two tag teams, involved in the 4th Annual Andre the Giant Memorial Battle Royal. Jason Jordan and Dolph Ziggler start, Dolph goes for a single leg takedown, but Jordan counters with a waist-lock into a rolling bridge. Dolph escapes with an elbow and connects with a dropkick. Jordan with his own dropkick for a two count. Gable comes in, working the arm. Slater comes off the top with a sledge and picks up where Gable left off. Rhyno with a short-arm clothesline and belly-to-belly suplex. He teases the GORE~! but Dolph escapes to the outside.

We return from break, with Gable hooking Jimmy Uso with a hanging arm breaker. Breeze and Fandango with a distraction, allowing Jimmy to take control. Jey with some ground n' pound, followed by a jumping headbutt to the midsection for two. Fandango sends Gable to the corner chest-first for a near fall. Jimmy meets the post on a failed dive, but Jey wipes out part of his teams on the apron. Gable with a back suplex, and hot tag to the only man on the apron... Mojo Rawley. He runs over Breeze with shoulder tackles and a clothesline. He tosses Ziggler over the top rope and charges into the corner with a stinger Splash on Breeze. Action gets out of control, with a bunch of guys going flying over the top rope through various means. Rhyno with the GORE~! to Ziggler. Mojo hits Beeeze with the running forearm, and that's it at 7:31 (shown). *1/2 Just a showcase for the cast of decent workers on Smackdown Live competing in the Andre Battle Royal.

- We run down the entire lineup for WrestleMania, including the New Day hosting the show stacked with 12 matches, 9 of them to be featured on the Pay-Per-View portion of the card.

Am I to believe that Harper doesn't have anything to do at WrestleMania? Wyatt is the reigning WWE Champion, but this is a Non-Title Match, with Bray scheduled to defend the Championship against Randy Orton at WrestleMania Sunshine. This won't go long, based on how much time is left for the episode. Harper has traded in his dirty gray wife-beater for Dean Ambrose's leftover black ones. Slugfest to start, with Harper getting the better of the exchange. He comes off the ropes, but Bray meets him in the middle with his full body block. Harper catches Wyatt coming off the ropes with a dropkick, sending him to the floor. Harper follow, unloading with a series of strikes. He sprints across the camera side of the floor and nails Wyatt with a forearm. He dumps Bray over the barricade... and take another break.

We come back with Bray in control. Harper escapes a uranage and catches him coming off the ropes with a side-winding slam for a near fall. Bray connects with the uranage on the second attempt and a senton gets a two count. Wyatt with another senton and sets up in the corner for the finish. Harper grabs him for Sister Abigail, but Bray bails. Harper follows him out with a pair of suicide dives, knocking Wyatt over the table on the second shot. Harper throws Wyatt back in the ring and hits a somersault senton and big boot for two. Harper with a running elbow into the corner. He goes for it again, then counters a Sister Abigail attempt with a roll up for two. Boot to the face and a Discus Clothesline gets another near fall. Wyatt starts acting creepy, catching Harper napping going for another clothesline, and finishes him with Sister Abigail at 5:04 (shown). Was he foaming at the mouth or did I just imagine that? **1/2 Good, for the amount of action packed into such a short package. The finish seemed a bit puzzling.

- Post-match, Randy Orton shows up on the Jumbro-Screen and hey, watch WrestleMania, why don't you?

Final Thoughts: Decent main event, but this was just two hours of filler to give us one last show before we take it to Orlando for WrestleMania 33, a.k.a. WrestleMania Sunshine, a.k.a. The Ultimate Thrill Ride. The card doesn't look like it'll be an all-time great, but be optimistic and try to enjoy the show. Next time on Smackdown Live... the Fallout from WrestleMania 33 and the march towards what 2017 has to offer.