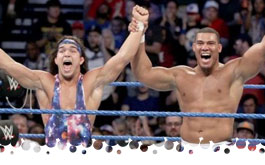 - Smackdown Live Episode #917 is live from Pittsburg, PA. Tom Phillips and John "Bradshaw" Layfield are at ringside to call all the action, unless otherwise noted. Mauro Ranallo is stuck in traffic somewhere and David Otunga is filming a movie or something that I more than likely won't watch or hear about outside of a WWE clip. Nothing major advertised in advance, although my mind might be playing tricks on me.

- After the show went off the air last week, Shane McMahon and A.J. Styles got into a brief scuffle at the gorilla position over Styles' disappointment in losing his Championship opportunity at WrestleMania Sunshine. A.J. Styles interrupts Shane McMahon's exposition phone-call, looking for Shane. Unfortunately for A.J., McMahon hasn't arrived yet. Styles comes to ringside to vent his frustrations to the WWE Universe™. Styles is still complaining about how Cena was gifted the title match at the Royal Rumble, but he accepts his loss. He expected a rematch, and all he got was a triple threat that he wasn't pinned in, then an Elimination Chamber. Then he not only won a Battle Royal, but he was forced to fight Luke Harper, and he beat him, too. Randy Orton burns down Bray Wyatt's house, and he doesn't get arrested or go to jail, he goes to the Main Event of WrestleMania. A.J. takes credit for the success of Smackdown Live. He says he's going to have a "conversation" with Shane McMahon about his career.

Last week, Lynch and Natalya were forced to team up and it didn't go well. Just a piece of the pie that makes up the Women's Title Match for WrestleMania. Becky quickly hits a dropkick and goes for some ground-and-pound. Whip to the corner and Natalya hides in the ropes, calling for timeout. Becky's response to a handshake offer is a slap to the face. Becky counters a German Suplex with a drop toe hold into an STF. Natalya rolls to the floor for a breather as we take a break. We come back, and Becky is still in control. Natalya lures her to the floor and plants her with a slam. Back in the ring, Natalya with choking across the middle rope. Snap mare and basement dropkick for two. Becky fights out of a chin-lock, but gets sent to the corner. Natalya gets the better of a slugfest and gives Becky a receipt for the slap. Becky with the comeback, hitting clotheslines, a leg lariat, and exploder suplex. Natalya counters the diving forearm, but gets caught in a rolling arm-lock into the Disarm-Her, and Nattie taps out at 4:59 (shown). Post-match, Carmella decides to remind everyone she's in the Women's Division, too, and lays both out with Super-Kicks. ** Short, decent action.

- John Cena hosted Nickelodeon's Kid's Choice Awards on Saturday Night. Here's some clips. - The Miz and Maryse are in the ring for a Special Edition of Miz TV. The guests this week are the IT COUPLE of WWE... Themselves. They're going to give everyone an in-depth look at what kind of frauds John Cena and Nikki Bella are. They once again had an awesome segment on Talking Smack (including another cheap shot at Daniel Bryan not being allowed to wrestle). Miz calls Cena the most manipulative, selfish, and plastic person he's ever known, and he lives in LA. Maryse gives us a story about how WWE wanted her to join the cast of Total Divas back in 2013, but Nikki told her the offer was too low because she could help her get more because she was "untouchable" since she was dating John Cena. The offer was quickly taken off the table, and she lost several years of time she could've spent with her husband. Is Maryse supposed to be a heel in this? Cena and Nikki come rushing out, and Miz and Maryse quickly bail. Nikki says they were never best friends and that Maryse is a brainless blowup doll. She offers Maryse to step in the ring, but Miz says she isn't John Cena, she just can't make a match. Daniel Bryan comes out to give Miz a piece of his mind. Every time he promises something and doesn't deliver, he wants to punch him in the face. Every time he rubs it in his face he can't wrestle any more, he wants to punch him in the face. Every time he poorly imitates his moves, that really makes him want to punch Miz in the face. There's someone that can punch him in the face, and at WrestleMania: The Ultimate Thrill Ride (and Ultimate Face-Punching Extravaganza), the Miz and Maryse will face Nikki Bella and John Cena. Miz continues to be awesome, deal with it.

Non-Title Match, and more build for the Women's Title Match at WrestleMania. James and Bliss had their working relationship broken last week, but I don't think Mickie is a face. Awkward heel vs. heel matches are never a good idea for a TV crowd. Shoving match to start. Lockup and hair pulling, and the referee forces a break. Bliss with boots to the midsection. Mickie dumps Alexa to the floor, but her baseball slide is countered by getting her head rammed into the post and swept off the apron. We come back from commercial with Alexa in control with a chin-lock. Mickie sweeps the legs and hooks a single-leg crab, but Alexa makes it to the ropes. Snap mare and basement dropkick for two. Fisherman Suplex for two. Bliss with the choke and STO out of the corner. Awful toss has Mickie land on her head, and you can hear Bliss ask if she's OK. Mickie with an elbow to block a charge, followed by the spinning hurricanrana. Bliss counters a charge with a sunset flip for two. Really-bad blocked DDT spot. Bliss counters a DDT with a roll up for two. Mickie with the Knockout Punch, but the Insult-to-Injury misses, and the Mick Kick finishes at 5:30 (shown). DUD This was bad. I don't like using the "on separate pages" joke, but they were in separate sections of the damn library, and the crowd was dead.

- Shane McMahon finally arrives. A.J. Styles ambushes him and lays into him with a flurry of rights. "Here's an opportunity to whoop your ass." He tosses Shane around like a rag doll and finishes by sending him head first through a car window. Finlay shows up to finally break things up, as if nobody expected some kind of physical altercation. Shane appears to be bleeding from the top of his head. My name is Finlay, and I need paramedics! When we return from commercial, Daniel Bryan confronts Styles about his behavior and fires him on the spot. NO! Smackdown Live NEEDS A.J. Styles!

Last week, Mojo announced he was going to participate in the 4th Annual Andre the Giant Memorial Battle Royal to try and have a "WrestleMania Moment." Dolph called him a flash in the pan, and Mojo rubbed it in his face he doesn't have one, either. I guess he has a Night After Mania Moment, though. At least it's not Round 67 of the terrible Ziggler vs. Kalisto and/or Crews Series. Ziggler picks the leg, but can't Mojo off his feet. Mojo carries Dolph into the opposite corner and rams a shoulder to the midsection. Mojo presses Ziggler in the air and tosses him over the top rope. Back inside, and Mojo tosses him again. Dolph with a dropkick for a one count. He dicks around with Mojo, cheesing him off. He tries tossing Mojo out, but Mojo counters, and sends Dolph over the top again. At this point, Dolph says screw it and takes a walk at 2:29. Not much of a match, mostly designed to build some kind of interest for the WrestleMania Battle Royal.

- Randy Orton comes out to finally give some spotlight to the "Main Event" at WrestleMania. He reminds us about the whole "if you can't beat them, join them, and when it's the right time, screw them" motto. He laid in the grass, waiting for months, looking for the perfect time where he could hurt Bray Wyatt the most. He devised a plan to get close to Bray and earn his trust. The longer he stood beside him, the more the venom ran through his veins. He says Bray Wyatt's biggest fear is being alone, and now, he is just that. There's still one more step to climb to finish what he started, and at WrestleMania, he swears he will take everything from Bray Wyatt. We finally hear from Bray, who is allegedly at the remains of his compound. He says Sister Abigail is the spawn of Satan, and her spirit was forged in Hell. She has bestowed her power upon him, making him more powerful than ever before. He grabs handfuls of the ash and smears it all over his face... Um... I don't even know what to say to follow up on that, so NEXT SEGMENT.

- Dasha Fuentes interviews Baron Corbin (standing in front of a fork-lift) about whether or not he crossed the line last week. He says if Dean Ambrose can climb out of his hospital bed and show up at WrestleMania, he's going to take his Intercontinental Title and put him down, for good. They're really going full steam ahead on a loaded WrestleMania card.

American Alpha vs. The Usos:

(Chad Gable & Jason Jordan vs. Jimmy & Jey Uso)
I totally forgot Smackdown Live has a Tag Team Division. Non-Title Match, again, which means the Champions are jobbing to create something for WrestleMania. Did JBL says the Usos are two-time Smackdown Tag Team Champions?! Gable and Jimmy start. Gable goes for the leg, but finds himself in the wrong corner. He makes his way out and tags in Jordan, who gets an early near fall on Jey with a dropkick. Meanwhile, Shane McMahon is being walked down a hallway by Finlay and Jamie Noble. To the live action, Jordan gets worked over in the corner. Usos try to do a single-corner double dive, but American Alpha stand tall in the ring and knock them to the floor with dropkicks. We return from commercial, with Jordan being swept off the apron going for a slingshot dive. Jey comes off the top with a guillotine forearm for two. Jimmy with a front face-lock. Jimmy misses a charge to the corner and hot tag to Gable. He takes Jey over with the Rolling Germans. Jimmy dives off the top and is caught with an over-head belly-to-belly. Snap German Suplex to Jey gets two. Gable with mounted punches, then a dive on Jimmy. Jey with a roll up with the tights for two. Jordan lifts him up for the Steiner Bulldog, but Jimmy knocks Gable off the top, and the Super-Kick finishes him at 7:01 (shown). ** This was fine and gives the Usos a much-needed win. Again, crowd was dead for the match, except for the occasional "We Want Angle" chants (Angle was at the arena, taping for a WWE Network Special).

- Shane McMahon stumbles out to announce that A.J. Styles has an opponent for WrestleMania, and FADE TO BLACK.

Final Thoughts: If you were looking for a good night of wrestling, well, this wasn't that episode. A couple of decent matches is all you're getting. On the flip side, we had a lot of talking, and it was mostly good stuff, building interest for a lot of matches that, on paper, weren't that enticing to begin with. I'm actually looking forward to the Mixed Tag, and Styles vs. Shane, while a disappointment on paper, means they think highly of Styles as a worker, so good for him. Every Championship seems to be in line for a title defense, but the Women and Tag Team matches might barely qualify as Kickoff Show material, and don't have much momentum.