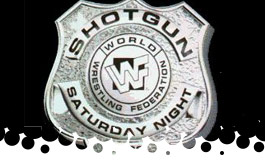 Taped on March 17th from Syracuse, NY, with Jim Ross and Brian Pillman calling the action, unless otherwise noted. Last week we were promised "Sunny Undercover" (or Sunny Under the Covers, based on when it was advertised) and they pulled the "we ran out of time" card on a TAPED SHOW, but tonight, we're promised to see Sunny, and maybe for longer than 15-seconds! We're 24-hours away from WrestleMania the 13th, so I expect a ton of highlights and recap videos from Raw to give one last hard-sell.

Oh boy, MORE Godwinns vs. Blackjacks. We've seen non-finishes and the "referee didn't see a foot on the rope" finish, so who knows what they'll book for a finish tonight. Lockup into the corner and we get a clean break. Another lockup, another break. Pillman uses the word "quagmire" twice in one sentence. They go over the top rope together with another lockup. Bradshaw throws a series of right hands and boots Henry across the side of the head. Crisscross and Godwinn drops Bradshaw with a clothesline. Henry works the body and takes a swipe at Windham, allowing Bradshaw to regroup. Godwinn quickly cuts him off and takes him over with a BAAAACK body-drop. Vertical suplex for two. Doug Furnas and Phil LaFon come down the ramp to get a closer look as Pillman makes fun of their lack of personality. Back in the ring, Bradshaw sends Henry to the canvas with a big boot. Godwinn ducks a lariat, but the Slop Drop is countered thanks to Bradshaw hooking the top rope. Bradshaw to the top rope and Godwinn catches him with a powerslam for a near-fall. We come back from commercial (and Dok Hendrix shilling WrestleMania the 13th) with Henry hitting Bradshaw with a belly-to-belly suplex for two. They trade blows from their knees, getting the honor of being called a slobber-knocker. Bradshaw wastes time jawing at LaFon and Furnas. Godwinn hits him with a powerslam as the Headbangers rush to ringside and attack Pillman's favorite tag team. There's obvious crowd sweetening going on for this ringside brawl. All eight men end up in the ring and the match is thrown out at 6:51 (shown). COME ON, these geeks don't deserve the benefit of not having to do jobs!

Highlights from Sycho Sid vs. Bret Hart for the WWF Championship from Raw is War, including the post-match (censored) meltdown from Hart and the chaotic brawl of everyone personally vested in the Championship. Everything patched together for one long segment on this show ran nearly 11-minutes.

Kevin Kelly is standing by for an interview with the Tag Team Champions, the British Bulldog and Owen Hart. Sorry, Owen comes out by himself, that's my bad. Owen says he's the captain of the team. Bulldog is the brawn, but he's the brains and the wrestling technician that helps them keep the belts. Bulldog comes out as Owen wraps up the promo patting himself on the back. Owen is still trying to sell he held back in their match for the European Championship. Bulldog says he'll make sure that they leave WrestleMania as the Tag Team Champions. Owen says Bulldog needs to listen to him, because he did better in school, and denies any dissension. They're family, Bulldog married into the family, and they must live with it, and together they'll keep the titles. Bulldog cuts Owen off, saying he's jealous, but he'll put it aside at WrestleMania because they have a big task at hand. He says he's taking charge and Owen needs to listen to him, and the reaction on Owen's face is priceless, like a kid being told for the first time that Santa Claus wasn't real.

Highlights from the 1997 Slammy Awards. Definitely not as fun a show as the 1996 Awards.

Goldust was surprisingly absent from the go-home episode of Raw, making him seem like he has little chance against Hunter Hearst Helmsley, who has been all over television lately with his new muscle, Chyna. Goldust opens with a clothesline and stomps away on Devito before tossing him through the ropes. Goldust follows, sending him into the steps. Back inside, Goldust bounces off the ropes with a diving clothesline. Ross fears for Marlena's safety if she's brave enough to cross Chyna again. Goldust with a snap mare and elbow drop for two. He takes Devito over with a suplex. Short whip to the corner, Goldust with a boot to the back and the Curtain Call finishes at 2:54. Two weeks in a row where Pillman buried the enhancement talent featured. He also makes a timely reference to Ellen DeGeneres coming out of the closet on network television.

Highlights of The Legion of Doom vs. The Nation from Raw is War.

With THREE MINUTES of television time left, here's the second attempt at presenting "Sunny Under(the)cover(s)". They've got the heart-shaped bed at the top of the ramp recycled from the set of the Heartbreak Hotel. The LOD were contacted by Clarence Mason before their return, so maybe they'll betray Ahmed Johnson. Word on the street that an old friend of Steve Austin is ready to go off like a "time bomb" at a minute's notice. What will Shawn Michaels be doing at WrestleMania? Let's say Steve Austin better not be the only one with eyes in the back of his head. She talks about jumping the Hitman from behind and predicts Rocky Maivia will lose the Intercontinental Title at WrestleMania 13. This... was awful. It's like someone read "Vic Venom's The Bite" in WWF Magazine and wanted it as an actual television segment.

Final Thoughts: Here we are, at the doorsteps of WrestleMania. Only two matches this week, and one was a standard squash match, so not much to see here unless you love non-finishes between heatless prelim tag teams. The Sunny Undercover/Under the Covers segment felt like a mess, trying to blend kayfabe and shooting and it just sounding like a mess. Considering Sunny's presence on Raw has been minimal at best, it's obvious they are trying to find something to justify having her under contract, and I don't expect this segment to be featured for too long.