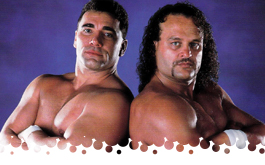 Taped on March 10th from Worcester, MA. Jim Ross and the returning Brian Pillman are calling the action, unless otherwise noted. This is Pillman's first live appearance since having his ankle shattered by Steve Austin the weeks leading up to Survivor Series ‘96. He's walking fine and without a crutch, which is good to see. Jim Ross promotes some of the action for tonight, including the newest segment, "SUNNY UNDER THE COVERS". Pillman says if the censors get mad, they'll fire Ross, not him, because he can catch on somewhere else if he has to.

So, the BIONIC AMAZON WOMAN finally has a name after four weeks of appearances and varied nicknames. We see highlights from Raw is War where all parties involved in the Goldust/Helmsley feud got into it. Jim Ross gives Holly credit as a former Intercontinental Champion, from the time where there was a disputed finish in the Spring of ‘95 involving Holly and Double J (not Jesse Jammes), yet Savio Vega doesn't get the same respect? Lockup into the corner, Holly ducks a right hand and lays into Helmsley with boots to the body. Helmsley misses a charge in the opposite corner and gets rolled up for two. Whip is reversed and Holly with a hip toss, followed by a deep arm drag into the arm bar. Pillman goes off on a rant about Steve Austin, calling him a false prophet that people are idolizing. Wait a minute... they just re-used the footage of that sequence! I was typing it up and noticed it was identical. Crisscross and Helmsley with a high knee, followed by a back breaker. Holly comes back with an inverted atomic drop and throws a series of rights. Whip and Helmsley counters a back body-drop with a knee to the face. Helmsley with a neck breaker and a flurry of blows in the corner. He takes Holly over with a suplex and drops a knee across the forehead for two. Pillman says Chyna's face is the "face that launched a thousand plastic surgeons." Helmsley makes a trip to the top rope and gets straddled across the turnbuckle for his effort. Holly climbs up as well, but Helmsley blocks the super-plex, dropping Holly face-first. Holly recovers to nail Helmsley coming off the top and runs through him with a pair of clotheslines. Whip to the ropes and Holly with a Franken-Steiner for two. He connects with his signature dropkick but misses a diving knee from the top rope. Helmsley finishes with the Pedigree at 6:41. Surprisingly no interference from Chyna. Good for a B-show match. **½

Both these teams will take part in a 4-Way Elimination at WrestleMania the 13th, so I'm expecting a non-finish because that's all we've gotten lately from the tag team division. LaFon and Mosh start. Pillman asks if we should check the pulse of Furnas and LaFon, because they look like they're sleepwalking. Mosh sends LaFon to the corner. He blocks a head-scissors, dumping LaFon to the apron. LaFon fires back with a shoulder to the midsection and comes in with a sunset flip for two. LaFon with an arm drag into the arm bar as Pillman gushes over the Headbangers and their personalities. Furnas in with a shoulder tackle, knocking Mosh into his corner to tag in Thrasher. Lockup and Furnas with a takedown into a headlock. Thrasher counters, but Furnas quickly escapes and brings him back to the canvas with a waist-lock. Mosh back in as Pillman keeps harping on the lack of energy from LaFon. Furnas blocks a slam, then gives it to Mosh, getting dropped across the top rope. Did someone forget the spot? Whip to the ropes and Mosh with a clothesline from the middle rope for two. Whip is reversed and Furnas takes Mosh's head off with a clothesline. LaFon with a standing leg lariat, followed by a shoulder block for two. Whip and a double back-body drop on Mosh for two. These guys might as well be working in an empty building. Thrasher with a slam on Furnas for two. Furnas with elbows to escape a chin-lock, only to get caught off the ropes with a side slam for two. LaFon gets the "hot" tag and hits Mosh with a spinning heel kick for two. He plants Mosh with a slam and comes off the middle rope with a senton for another two-count. Snap suplex for two. Mosh with a Hot Shot on LaFon, followed by a wish bone. LaFon surprises Thrasher with a sunset flip for two. Furnas with a powerslam for two. Overhead belly-to-belly suplex for two. Mosh muscles LaFon over the top rope, and now all four men are brawling at ringside for a Double Count-Out at 8:01. Called it. You could see the effort, but no heat and the Headbangers haven't had a good match yet. *½

Highlights of the "misunderstandings" that have happened lately between the British Bulldog and Owen Hart. This leads to an interview in the ring conducted by Lance Wright. He asks if they'll be on the same page when they defend the titles against Vader and Mankind. Owen wants to address that Bulldog beat him fair and square, though he would've won if he really tried his best. For now, they must focus on the tag team titles! Mankind and Vader are great, but they don't have teamwork. Bulldog says they have no animosity and they're the best tag team today. There's one thing they can't do at WrestleMania: They can't make Vader and Mankind look any uglier than they already are.

I don't know why I keep flip-flopping on the name of Flash's female dancers. They're the Funkettes. The Funkadactyls were Brodus Clay's dancers, Naomi and Cameron. Lockup and Funk goes through a series of quick moves to take control of the arm while Pillman buries Centeno for looking like he came from a homeless shelter. Funk escapes a hammerlock and takes Centeno down with a spinning head-scissors. Flash with a drop toe hold into a leg lock, but Centeno counters with a head-scissors of his own. WHA?! Whip and Flash with a shoulder tackle, followed by a diving shoulder tackle. Flash with a standing leg lariat. Centeno with another head-scissors and a clothesline. He goes to the top rope and hits a flying body press for two. Flash reverses a whip to the corner and charges in with a clothesline. Flash with a spinning heel kick in the corner, scoop slam, and spinning leg drop for two. Flash to the top rope and the 450 splash finishes at 3:46. Jim Ross notes Flash Funk will meet Billy Gunn on the WrestleMania Free For All. I was surprised to see Flash give Centeno as much as he did.

Highlights from Raw is War of Ken Shamrock being named the special referee for the Submission Match at WrestleMania, followed by the interruptions from both Bret Hart and Steve Austin.

They keep trying with the AAA guys. Looking ahead in the shows, it looks like we've only got a couple more appearances before the relationship ends, at least as far as the television presentation is concerned. We see the clip of Garza hitting everyone with a corkscrew tope on Monday Night Raw. Garza goes for a waist-lock, but Metal grabs the ropes. Metal takes Garza down with a headlock and is quickly countered. Whip to the ropes and Metal with a spine-buster. He hooks a leg lock, but Garza rolls into the ropes for the break. The match is serving as background noise to promote Bret vs Austin at WrestleMania. Whip and Garza with a dropkick. Metal misses the handspring elbow and barely gets the shoulder up at two. Garza misses a twisting senton from the top and now Metal covers for a near-fall. Whip and Metal with a handful of hair to slam Garza face-first to the canvas. Whip and Garza kicks the leg from under Metal, sending him into the ropes. Metal sends Garza over the top rope ,crashing onto the ring steps. We come back from commercial with Heavy Metal bringing Garza in from the apron with a suplex. He misses a springboard moonsault and gets caught in a modified camel clutch. Whip and Garza with a diving clothesline. Metal side-steps a dropkick and hooks a traditional camel clutch. Whip to the corner and Garza avoids the charge. He nails Metal with a missile dropkick and finishes with a standing moonsault at 4:31 (shown). These two continue to be the only guys from AAA that can blend their lucha-libre style with what North American audiences would want to see. **

Advertisement for the MSG show on Sunday Night. The show would run on the MSG Network opposite WCW Uncensored, because RAW IS WAR... or something.

With less than ONE MINUTE of television time left, we finally get to the new feature, "Sunny Undercover." There's a bed set up on the stage for Sunny to climb into... and we're left with the advertised segment not taking place ON A TAPED SHOW, but we can check into the show next week to see what we were promised. That's some Herb Abrams/UWF levels of bull-crap.

Final Thoughts: A couple of decent matches and one long boring tag team match. The biggest sin is advertising something like a Mature-audience segment featuring the sex symbol of the company and not delivering, blaming it on running short on time when the show is taped well in advance. Nothing is ground-breaking, but Holly/Helmsley and the Garza/Metal match were above the usual quality of these B-tier shows.