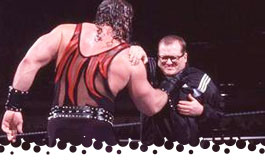 Last time in our re-visiting of the Royal Rumble, we took a look at each Rumble from 1994 through 1999, and HOLY CRAP, were they some of the worst, dullest, and least memorable Rumbles in the history of the event. 1999 is when the concept finally hit rock bottom, with a shallow talent pool, lack of attention to detail, poorly constructed spots, and a swerve for the sake of re-writing the script and screwing with people who paid to watch this garbage. This time around, we kick things off with the year 2000 and work ourselves halfway into the next decade...

Rumble Match Rating: Not a great Rumble by any stretch of the imagination, but it was more entertaining than what we’ve seen in quite a while. Started off dull, but Rikishi’s arrival woke the crowd up, cleared the ring, danced a bit, and stood tall for a few more entrants. It didn’t get over that well, but having Kaentai and the MSP running in and thrown out almost instantly was funny the first time or two. Things picked up when the Rock arrived, and there was a good finale, but there wasn’t a match long performance to tie everything together. [***1/4]

Rumble Match Rating: With the exception of a 10-minute period from Bradshaw’s entrance through Test’s, this was a fun Royal Rumble with a lot of different sequences and booking choices to keep everyone entertained. We got the showdown between tag partners, a few fun surprises a Hardcore sequence, one person dominating the field, HHH running in and busting up Austin, and a hot finale. One of the best Rumbles that most people seem to forget about. [****1/4]

Rumble Match Rating: Not the greatest Rumble, but there wasn’t much to complain about, either. The biggest sin of a Royal Rumble is crowding the ring, and never did the ring fill with more than 7 people. The Undertaker’s sequence in the first half carried a decent stretch of the match, including a ring clearing sequence, the battle with both Hardys, and the shocking elimination by Maven. Things cooled down for Austin’s arrival, who cleaned house until Triple H made his in-ring return. We got a hilarious spot from the Hurricane, a fun return from Mr. Perfect, and who doesn’t enjoy HHH burying RVD with a Pedigree? [***3/4]

Rumble Match Rating: Underwhelming Rumble Match, with a complete lack of momentum once the half-way marker hit. There was some fun individual performances, like Jericho attempting to do the Iron Man story to win it all, and the stuff with Matt Hardy and Shannon Moore. Brock Lesnar and Undertaker came in late with some hot sequences, but outside of that, there wasn’t much that happened late that was worth mentioning. Whenever the ring clutters that much (at times there were 12 people in the ring), there’s no chance of having interesting spots beyond an occasional couple of seconds. [**3/4]

Rumble Match Rating: Ignoring the sad decline of the main player of this Rumble, it still holds up as one of the best ever, maybe even better than 1992. You have the match long story of Benoit having to go the distance, along with Randy Orton surprisingly keeping pace until Mick Foley interjected himself. You had one of the best "mini matches" to end the Rumble, with Show vs. The World until it came down to just Show and Benoit. Brock Lesnar made his presence felt on Goldberg, who was cleaning house for his brief time in the ring. You had comedy with Ernest Miller, a cheap elimination of Kane that teased the eventual return of Deadman Undertaker, and from bell-to-bell, just an excellent Rumble. [*****]

Rumble Match Rating: One of those Rumbles that somehow slips through the cracks for the top of the list. You went the route of teasing that Benoit might accomplish the impossible two years in a row and kept Eddie in for the ride most of the way. Cena and Batista coming in late to dominate and making a strong case for either to win the Rumble. The "hazing" booking Daniel Puder, the Raw vs. Smackdown Clash and the eventual alliance to gang up on Hassan, and planting the seeds for Shawn vs. Angle are a few of the notable spots. [****]

Final Thoughts: An impressive string of Royal Rumbles to begin the new Millennium. 2000 was probably the weakest of the bunch, but it holds a soft spot for me because of the location and set design. 2001 delivers a home run and one of the greatest performances from (at one time) one of my favorites (that’s got to be Kane!). 2002 is solid from start to finish, and 2003 delivers a strong effort even with a weak second half. I’d still consider 2004 arguably the best Rumble Match of all-time. Next time we will cover the years 2006 through 2010. This is when things start to blur together for me, so it should be interesting. Until then...