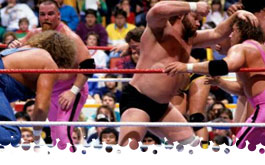 WrestleMania is often the pinnacle of the calendar year in WWE, with an exciting atmosphere, jacked up crowds, and more often than not, outstanding lineups, even in years when the creative direction doesn’t quite meet expectations. The only other night of the year that comes close is the annual Royal Rumble PPV, featuring a 30 (and in one instance each, 20 and 40) WWE Superstars in a Battle Royal style match, with the winner of the match earning a shot at a World Championship, a reward that has been in place since the 1993 PPV (there was no reward for 1988-1991, and in 1992 the prize was the WWF Championship). Even though the Rumble PPV has featured some outstanding matches over the years, we’re going to look back at every Royal Rumble Match, starting in 1988. The first official Rumble Match, according to TheHistoryofWWE.com, took place in St. Louis, MO in October of 1987, but wasn’t in front of cameras, and from old Wrestling Observer records, it wasn’t a good debut, either. We will touch up on each card (and yes, I’ll have my official star ratings handy), but this will be primarily about the Rumble Match itself, so don’t be too disappointed....

Rumble Match Rating: It was the first of its kind, so there wasn’t much of a measuring tool to gauge this with. There was never much of a lull in the action, thanks to only being 20 participants deep, and for the most part, everyone worked hard or had enough energy to make everything look exciting (again, most everyone. Still looking at you, Junkyard Dog). We didn’t get many big spots or anyone running through the competition, but it served its purpose of holding interest of the crowd for a longer-than-usual match than WWF was used to doing, and kicked off a yearly tradition. Give this one a look for historical factors, but you’ll likely be disappointed by the undercard feel of everyone involved. ***

Rumble Match Rating: Things start off exciting with Ax and Smash fighting, and Andre The Giant carrying the first 15-minutes by working fun sequence with everyone that enters. The middle portion features a lot of decent action with guys like Savage, Bad News, Hennig, Santana, Michaels, and the Brain Busters, and then Hulk Hogan comes in and explodes, cleaning house of nearly one third of the field. The final 10+ minutes falls a bit flat, but it’s always fun to see a nefarious heel get what he has coming to him, especially when he tries to buy the best spot in the match. ***1/2

Rumble Match Rating: With only a few sequences of lull, this was easily the most enjoyable Rumble Match to date, with plenty of star power, excitement, hard work, and strong booking. It also helps that the ring never fills up too much, making the action hard to follow. Dibiase started with good mini-matches, followed by an awesome series with Savage, Roberts, and Piper, the mini-match involving Demolition and the Colossal Connection, the Piper/Brown double elimination and brawl, the gaggle of participants ganging up on Earthquake, Hogan and Warrior cleaning house until we got their big showdown, and a hot finish with Hogan and Mr. Perfect. [****1/4]

Rumble Match Rating: This one really suffered from an over-crowded ring. There’s too many people in for most of the match, and very little side stories or sequences to get worked up about. You had two iron men, but neither was a true threat to win the match, there wasn’t any big ring clearing sequence, and the most memorable moment was a comedy elimination of Bushwhacker Luke. It wasn’t AWFUL, just not very exciting. **1/2

Rumble Match Rating: Regarded as one of the best Royal Rumble matches... and I can’t disagree. Ric Flair was the story of the night, and stole the show, lasting a full hour and working with the majority of the field, some in extended sequences, and others in nice little throwbacks. You had the story of Piper going for double gold, the spot with Roberts and Savage, Sid Justice cleaning house and the surprise finish with Hogan and Sid turning on each other to leave the door open for Flair’s victory. With only a few moments of lackluster action, it’s hard to find anything negative to say here. *****

Rumble Match Rating: This was a tale of three chapters. A really fun stretch from the opening with Flair/Backlund, with a decent range of entrants to keep the match fresh until we got the big encounter with Perfect/Flair, and then a few entries later the Undertaker cleaning house. Then Undertaker’s elimination brought us 20 of the suckiest minutes of Royal Rumble History. When Yokozuna came in at #27, things picked up again, and we got one of the best "final two" sequences in Rumble history. Still, that middle part REALLY sucked. ***

Final Thoughts: A lot of the early Rumbles are fondly remembered, and for good reason: they have strong booking, balanced pacing, and roster depth. Once we exit the period of the steroid scandal, the roster starts thinning out at an incredible pace, as you can tell by the roster of 1993. We’ll be back later in the week with Part 2, covering the Royal Rumbles from 1994 through 1999. That really covers a wide period that includes the "New Generation" and the first half of the Attitude Era. Until then...