Usually, for #HalloweenHavok, I at least try to dig up something odd or weird... but sometimes you gotta' go with the low-hanging fruit. Honestly, I'm a little surprised that it's taken us to year EIGHT to get to this episode of RAW. 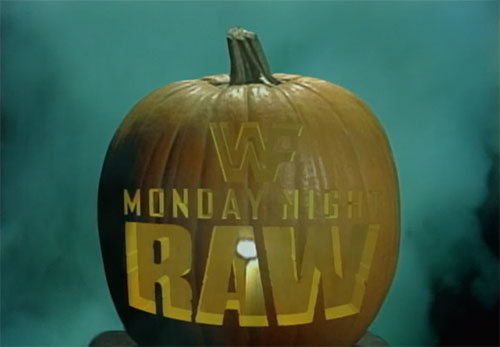 - Opening flashback montage is narrated by Todd Pettengill, in what's supposed to be a Dracula voice, but he's more like Sesame Street's Count Von Count, complete with the "ah-ah-ah". Last week, vee had a 22 man vattle royal..for an Intercontinental title shot, which was vun, errr--dammit--WON by Owen Hart. This veek--dammit--WEEK, we'll also have the network TV debut of Goldust. Cue the opening package: a happy dance-off of all the prominent players in the WWF, in a parking lot wrestling ring. For what it's worth, footage of Dean Douglas scratching a chalkboard is included. And, in something I've never noticed before, we even get Michael Hayes dancing. But with so much going on in the World Wrestling Federation, let's get down to ringside for...

Lights are flashing and a siren is blaring! Coming from Brandon, Manitoba, our ringside hosts are Jerry "the King" Lawler and Vince McMahon. We can tell this is a Very Special Episode, because there's a jack o' lantern WWF graphic in the lower-left of the screen. Lawler is dressed up as surgeon and McMahon is in the generic convict costume. Lawler drops what may have been a rib on McMahon and the steroid scandal: "I heard you got that outfit a year ago". He then uses his stetoscope to determine that McMahon is heartless. Vince, to his credit, takes it all in stride with a smirk. Whereas, a few years later "Mr. McMahon" would've dropped trou and demanded Lawler smooch his tushy on-screen for these actions. 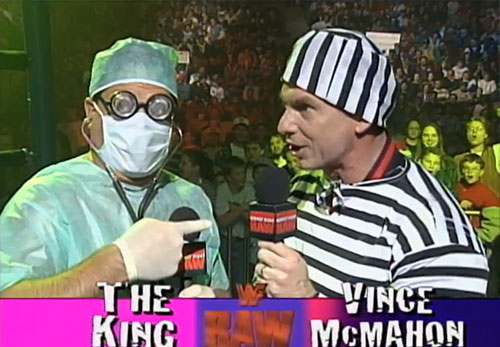 Savio stops to high-five the Spanish announce table of Hugo Savinovich and Carlos Cabrera, and they're also decked out in cheesy Halloween outfits. Goldust attacks before the bell and goes to town. Vega comes back with some punches, but misses a dropkick. Goldust target the left arm for a good 4-5 minutes. They hit the ropes and Savio get a bodypress for 2. Goldust misses a charge into the corner and Savio goes wild with clotheslines. A crescent kick misses, so Goldust charges with a boot... that clearly misses Savio by a foot or two. Goldust then hammerlocks the injured arm and scores the pin. The basic "heel feature match" they'd run since the mid-80's. I've said it before, but in terms of booking, Savio is the 1995 version of Koko B. Ware. 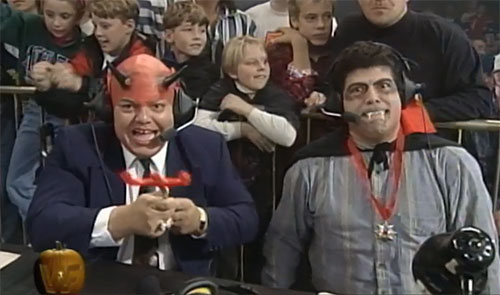 -Courtesy of Milton Bradley's Karate Fighters, Dok Hendrix (Hayes) has an update on the upcoming Survivor Series WWF Championship match between Bret Hart and Diesel: there will be no count-outs or disqualifications and no time-limit. Wait-wait-wait! We have to break away, because something's going on in the locker room area! It's the 1-2-3 Kid and Razor Ramon arguing, as we go to commercial. So, if you're scoring at home (and we are), Hendrix got cut off so we could see 3 seconds of two guys arguing. 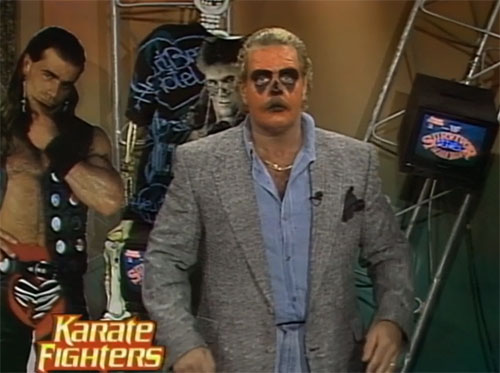 -We come back with what looks like a montage promo of Barry Horowitz and Hakushi, as they compare American and Japanese pop culture references. Hakushi then suggests they settle their differences with... KARATE FIGHTERS! Horowitz Wins and pats himself on the back... but Hakushi wants 2-out-of-3. Okay, this was actually kinda' funny.

Jannetty, with all his tassles, resembles a piñata. Research tells me that Dorgan; with his "Hot Bod" labelled trunks; turned out to be Johnny Swinger. They start off working each other's arm, then Jannetty turns it into a monkey-flip. Dorgan tries "Hammering Away™", then eats an elbow from Jannetty. Another monkeyflip from Jannetty, followed by a fistdrop, snapmare and...a Reverse Chinlock Occurs. Some obligatory punchin' from both sides, then Jannetty almost randomly hops up to the top turnbuckle for a flying fist-drop and the pin. Basic early 90's WWF squash.

Cornette is calling foul on how the Bulldog has been passed over for a title shot, after the results of the last In Your House. Cornette then introduces "America's finest litigator, Clarence Mason". Mason threatens legal action against WWF Interim President Gorilla Monsoon. Always a good move to have an additional mouthpiece for the Bulldog-- he seemed to have the same demeanor in his promos, whether he was face or heel. McMahon brings up next week's match between Bulldog and Marty Jannetty. About a minute later, Jannetty does a run-in and clears the ring.

But first, it was Not That Long Ago at In Your House, when the Gunns defended their WWF Tag Team Championship against the 1-2-3 Kid and Razor Ramon. Kid snapped afterwards and attacked both Gunns. As the match starts, we get an iset promo from the Kid, who apologizes for his post-match temper tantrum, then challenges the Gunns to a rematch. Basic tune-up match for the Gunns, as they do their usual deluxe brawling with clotheslines and elbowdrops. The Gunns' Side-winder finishes up another squash match. Yeah, I think D'amore was the future TNA guy.

-Pe-recorded promo from Bret "the Hitman" Hart who has some Fightin' Words for WWF Champion Diesel. Hey, tune in NEXT WEEK when Bret will team with Hakushi (wha? No Horowitz?!) to take on the team of Jerry "The King" Lawler and Isaac Yankem.

The cameras turn during Owen's entrance, so we can see merchanise shill Barry Didinski talk about the replica title belts you can order! Hey, if you call now, you can get 3 additional 8x10 pictures of either Razor Ramon or Diesel. We poke fun at stuff like this, but WWE is still doing it in 2018 with "commercials" on the WWE Network. At least nowadays they're clearly segmented advertisements and not forced product shills in the middle of the show. Our first real commercial then hits.

Before going back to the ring, we get a promo from Paul Bearer in a graveyard (no surprise), promoting the return of his Undertaker. By the way, tomorrow night, Paul Bearer will be on America Online! I'm 100% serious when I ask if anybody has a transcript of that chat. I mean, did he actually type out "ooohhhhhh yes" when answering a question?

Now, about that match: Razor slides into the ring, before the bell, and clotheslines Hart over the top rope...all with his championship belt still on! On-screen ad for Karate Fighters as Owen stews at ringside. They works the arms and Razor manages to hold on through Owen's monkeyflip. Razor straddles Owen's shoulder and paint-brushes him, while still working the arm. Owen attempts a flying cross-body, but Razor turns it into an overhead fallaway slam. Razor goes back to the arm, while Yokozuna (w/Mr. Fuji) wanders down to ringside. Back from commerical with more arm fun. Owen evades a charage, sending Razor flying to the outside. Follow-up baseball slide drop-kick from Owen, as Razor hits the railing and sells it as if a tooth fell out! Back in, Owen comes off the top with a flying drop-kick, but only gets 2. JUMP-JUMP to the ropes and a spinning heel-kick gets another 2 for Owen. Reverse neck-breaker and a flying elbowdrop and it's still only 2 for Owen. Commerical time. Razor tries a super belly-to-back suplex from the top, but Owen reverses it into a pinning predicament. Commerical time, again! We come back as Razor is setting up the Razor's Edge, but Yokozuna then runs (as best he can) into the ring to break it up and signal the disqualification. Good match, but the two commercial breaks ruined the final minutes. The live crowd was into this, but for TV viewers, the commercial breaks killed the flow.

We're not done, though, as a beatdown is on. The 1-2-3-Kid runs in to save his buddy, but ends up getting leg-dropped by Yokozuna. Ahmed Johnson arrives and SLAMS Yokozuna to a big pop! The British Bulldog then shows up and we get a staredown, as we're outta' time!

Final Thoughts: I rarely watch this era of WWF, but are we certain that this show aired on USA and not QVC? Sure, the ongoing promotional stunts are nothing new to wrestling, but this whole episode seemed like a commercial with wrestling in the background. It's either "order Survivor Series", "watch RAW next week", or "buy our crap (and Milton Bradley's Karate Fighters)". For the Halloween connection: well, the announcers are in costume, but everything else is business as usual. So it's like going to the grocery store and seeing the employees in costumes; no biggie and everything's still regular price. For the wrestling: Razor/Owen is worth a look, but the rest is completely forgettable junk.