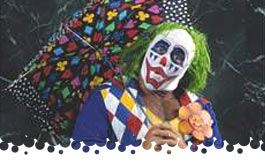 -Last week’s Summerslam replay of Bret Hart vs. Isaac Yankem must have done wonders with the audience, because Raw beat Nitro this week with a 2.6 vs. 2.2. Meanwhile, Nitro presented a hot show and showcased:

-From an undisclosed location (Grand Rapids, MI). Our hosts are Vince McMahon and Jerry Lawler.

They lock up, and Hunter is disgusted when Doink’s makeup rubs off on him. Doink takes a shot at the nose, strangely one of the only men ever to take advantage of such an obvious target. Doink absorbs some punishment before lifting a boot for a comeback. HHH dodges an elbow drop and serves a vertical suplex for 2. CUE THE CHINLOCK! Doink teases the upset with some pinning predicaments but wipes out in a cross body attempt. The Pedigree ends it at 3:48. Spirited little match and a good showcase for Helmsley, *.
Winner: Hunter Hearst Helmsley

-Hakushi is grilled about baseball trivia.

PG-13’s long title chase culminates after, what, one week? PG-13 try to double team Billy, who ducks to send them crashing into one another. JC Ice shows off his athleticism, earning a Bart clothesline for his mad skills. Ice manages to trip up Billy, setting up a Wolfie knee lift. PG-13 isolate Billy and wear him down for a through a commercial break. Bart gets the obligatory hot tag and slams PG-13 around like a couple of action figures. The guillotine leg drop finishes at 5:00 (shown). Strong win for the Gunns, who have much bigger fish to fry at IYH, *˝.
Winners and still WWF Tag Team Champions: The Smokin’ Gunns

-Hype video for Alundra Blayze vs. Bertha Faye next week. Should be interesting.

-Doc Hendrix hosts Jim Cornette and The British Bulldog in the ring. Cornette claims that Bulldog suckered Diesel into a compromising situation leading to Bulldog pulling off the upset. Doc thinks Bulldog only pinned Diesel because of a Yokozuna leg drop, which fires up the #1 contender. Bulldog feels like he’s being constantly disrespected and vows to beat Diesel at IYH.

-Ahmed Johnson is all worked up over something. I wasn’t listening, I was looking at Nitro results.

Douglas mostly has his way with Jorgan as Vince and Lawler talk to Shawn Michaels on the phone. Shawn tries to put on a brave face after getting ambushed by Douglas backstage the week before. Douglas wins with a Fisherman Suplex at 2:07. Nothing squash match.
Winner: Dean Douglas

-Doc Hendrix offers the chance to earn a passing grade for “being cool.” All you have to do is buy the new Two Dudes with Attitude shirt! Man, no wonder I was such a dork in fifth grade, I didn’t have that t-shirt!

-Goldust appears on film and promises to give Marty Jannetty a “makeover” in his “premiere” match at IYH.

-Paul Bearer is mortified over what Mabel has done to his Undertaker! The Dead Man might never look the same again! Despite these setbacks, Undertaker will return and take the souls of Mabel and Yokozuna.

Yankem goes right after Bret’s back and smashes him into the corner. Bret sidesteps a head of steam and delivers an atomic drop and clothesline. Bret power slams Yankem in place for an ax handle but fails to escape the cage. Yankem slams Bret head-first into the cage and looks to climb out, but Bret pulls his legs out for a nasty spill to the canvas. Lawler was upset that Isaac would attempt a quick win but that bad bump leaves him speechless. A referee discovers he can’t get through the locked door, and Lawler reveals the real lock hidden in his crown. Cute. CUE THE COMMERCIAL! Bret musters a comeback, tossing Yankem off the cage yet again. Bret puts Yankem down with the Sharpshooter and would have escaped had Lawler not cut him off at the top. Gorilla Monsoon and a herd of officials come to ringside to remove Lawler after getting knocked down by Bret. They force Lawler into his own personal cage and hoist it in the air. So much attention is devoted to Jerry’s cowardly pleading that Bret and Yankem’s efforts are pretty much wasted. They duke it out on the rope until Bret gets crotched. Lawler gets a bloody nose as they head to a second commercial. Bret lands a back suplex to buy some time to climb over, but Isaac pulls him back in. Yankem nearly escapes after hitting a DDT, but Bret drags him back for turnbuckle punches. Lawler tosses his key to Yankem, putting him in position to leisurely walk out the door. Bret cuts him off and nails a bulldog. Bret escapes over the top at 15:29 (shown). This was pretty dull and oddly lacking any compelling storytelling, **.
Winner: Bret Hart

-Vince McMahon threatens to shut down the entire show without ever letting Lawler out of his cage. That’s pretty funny.

Final Thoughts: It’s a little striking and sad how much better Nitro was than Raw this week. The fact that Raw beat Nitro in the ratings is surprising in hindsight. Thumbs down for a tedious show that had me impatient for the ending.