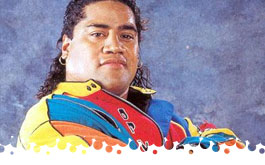 So, not the best effort from Nitro, but they managed to tie WWF Raw for the second week in a row, as both shows earned a 2.6 rating.

-Courtesy of the WWE Network and buffering issues that might postpone or cancel this review. From Grand Rapids, MI, with Jerry Lawler and Vince McMahon calling the action.

-Shawn Michaels is shown encouraging inner city students in D.C. to stay in school and celebrate their attendance. He gets choked up talking about it afterwards. The cheesy “after school special music” almost kills this.

Entrances take up two segments and the match finally begins during a commercial break. We join as Owen and Shawn put on a back and forth athletic showcase. HBK dumps Owen and the match breaks down. Taker and Diesel whip Bulldog and Owen into Yokozuna before knocking him to ringside with stereo big boots. Diesel brawls with Bulldog, tossing him to the floor for Undertaker to return the hard way. The babyface dominance continues until Yokozuna nails a Uranage on Michaels, making him the official face in peril. Michaels gets trapped by the heels and sells like a pro. Dean Douglas makes his weekly note-taking cameo while Owen locks Shawn in an abdominal stretch. The heat sequence lasts through two commercials, with Owen doing most of the work. Shawn’s suffering ends when Diesel gets a hot tag and cleans house. Bulldog manages a running power slam, but Taker prevents a pinfall. Match breaks down, and Yokozuna drops a leg on Diesel, serving the champion up for Bulldog at 11:48 (shown). Good action and crowd heat, but missing a satisfying third act, ***.
Winners: Yokozuna, Owen Hart, and British Bulldog

-Mabel runs in to help Yokozuna beat up Undertaker, while Owen leaves Michaels vulnerable to a Dean Douglas attack. British Bulldog continues to pick apart Diesel, and Douglas slams Michaels onto the ring steps. The faces are left down and out. Good way to build up a strong pay-per-view line-up.

-The majority of Bret Hart vs. Isaac Yankem from Summerslam is replayed. I guess the last Raw taping only had enough content for 2.5 episodes. Buffering issues are making this unwatchable for me, so this is as good as any episode to be dealing with technical woes.

Fatu vs. Skip (with Sunny)

The announcers talk about a backstage incident with Mabel going into Undertaker’s dressing room while Skip and Fatu exchange holds. Fatu shows some early signs of his Rikishi persona by dancing, but turns his attention to Sunny on the apron. Skip attacks from behind and Fatu sends himself crashing into the turnbuckles on a head of steam. Nice suplex by Skip puts him firmly in the driver’s seat. I hate to keep harping on it, but my enjoyment of the match is being completely dampened by the frequent buffering issues and I end up having to switch over to my tablet for the remainder of the episode. Skip injures himself with a diving head butt and Fatu makes the plucky comeback. Fatu’s frog splash finishes at around 6:30. Good little formula match but I was distracted throughout so hard to rate.
Winner: Fatu

-Doc Hendrix reports on the conditions of Undertaker, Diesel, and Shawn Michaels. Or not, he just paces, and they head to another commercial. Hendrix claims that it’s not a good time to interview the guys, and paints a picture of the three of them not looking like themselves.

-Jim Ross demands an explanation from Jim Cornette and The British Bulldog. Cornette rants and raves while Bulldog shows off his steroid-fueled physique. Cornette can barely finish a sentence without my stream freezing for 1-2 seconds. I give up.

Final Thoughts: I got the feeling that this would have been a frustrating episode to watch live in 1995 due to the stunning amount of commercial breaks taken before anything actually happened. I imagine it was a treat to see a free pay-per-view match in Hart vs. Yankem on Raw, as this was in the days before widespread internet piracy, but that didn’t exactly make for compelling television to run against Nitro. Thumbs in the Middle for Raw, but Thumbs Way Down for today’s WWE Network performance.