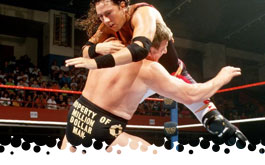 - For reasons that don't matter to anybody Not-Named-Me, I've been flashing back to 1994, recently. To set the stage for this, that summer the Meat Puppets had a radio hit, the Houston Rockets had just won their first NBA championship, the FX channel debuted, Orenthal J. Simpson was in a white Bronco, the WWF's King of the Ring had just happened...and I had the savvy fashion sense of wearing hiking boots with jorts. This episode emanates "Live" from the Westchester County Center in White Plains, NY, with our hosts Gorilla Monsoon and "Macho Man" Randy Savage! But wait, there's something historic: for the first time ever, we've got Carlos Cabrera and Somebody Else doing Spanish Commentary for RAW! Sorry, I've rewound the footgae several times to try to understand what Gorilla calls the second guy ("Ed Drewko"?), yet I'm coming up short. This also appears to be the period when the WWF was big on dropping the house lighting and going with all sorts of spotlights. So much of the wrestler introductions and arena shots look like the Battle of Winterfell. But with so much going on in the World Wrestling Federation, let's get down to ringside for...

If you're watching this on WWE Network, it's billed as "Diesel defends his Intercontinental Championship", but this is clearly a non-title match. Thomas looks like he wants to be the third Steiner Bro, with his mullet and neon-colored singlet. Knee-lifts a plenty from Diesel, then he tosses Thomas out to the floor, so Shawn Michaels can get a shot in. Back in for a side-slam, elbowdrop and snake-eyes into the corner. Wait for it...here comes a chinlock. Thomas bounces off the ropes, but makes the mistake of trying to hit Diesel's heel with his jaw. Jacknife power-bomb and Diesel gets the non-chalant one foot cover.

- A Special King of the Ring report with Todd Pettengill. We get some still shots and SPOILERS--- Owne Hart won the whole thing with the help of Jim "The Anvil" Neidhart. Wanna' see more? Order the encore presentation, next Tuesday!

Kid offers a handshake, but Nikolai brushes him away. Two lock-ups and Nikolai shoves Kid to the mat, both times. Kid comes off the ropes with a slopp bodypress (Nikolai didn't catch him too well) for a quick 2. Nikolai with a slowwwww spinning ballerina kick, then an elevated tree-choke slam. Kid slips out of an over-the-shoulder bear hug and gets a roll-up for 2. Kid with some kicks, but he soon eats Nikolai's boot. Underhook suplex gets 2 for Nikolai. Another roll-up and another 2 for the Kid. Nikolai tosses him around, but Kid keeps kicking out. Press-slam/rib-breaker, twice, but Nikolai pulls him up each time on the order of DiBiase. Kid fakes a knee injury...and suckers Nikolai into a small-package for the "surprise" pin. Post-match, Nikolai and DiBiase do a beatdown. But wait...who's this coming to make the save?! It's the Man They Call... VIRGIL! Well, at least there's a logical history here. Virgil gets a beatdown, as well. So we get another save--- this time from Lex Luger. DiBiase and Nikolai immediately bail.

A squash match with lots of punchy/thumpy/kicky from Yoko. After about two minutes, the big legdrop seals the deal for Yoko. At least Yoko looked like he was pissed off, which I suppose was the point.

Another King of the Ring recap and encore hype. I only mention it because it's narrated by Lord Alfred Hayes. How long did he stick around? 1995?

Typhoon vs. The Black Phantom

But wait...Yokozuna is in Typhoon's path. Typhoon decks Yoko, then heads to the ring. Phantom's a little more animated than Barberi and sells a Typhoon shoulderblock well. He gets a few chops into the corner, but Typhoon whips him to the opposite corner and avalanches him. Straddle splash on the ropes, then two front-facelock suplexes from Typhoon. Another BIG avalanche into the corner, followed by a splash, scores the 3 count for Typhoon. Fans seemed to be into it.

The King's Court with Jerry Lawler

Lawler runs down Roddy Piper some, leading off with a bad joke about "Piper's daughter". See, cuz Piper's second at King of the Ring was wearing a "dress". Lawler says he's done with Piper and brings out his guest, Duke "The Dumpster" Droese. To help us with context, we get a flashback from 4 weeks ago on "Superstars", when Droese dumped a can of packing materials, errr, garbage on Lawler. Back to live action, Lawler proclaims that Droese stinks and won't let him in the ring. As Droese turns to leave, Lawler attacks him in the aisle and thumps him with a trash can. This whole feud is basically: "you stink". "Oh yeah, well I don't like you". How engrossing.

Good golly...Jim Powers?! Yet no "Crank it Up", so I can't complain as much. Powers floors Jimmy Delray with a shoulderblock and mocks the Bodies' new angel wings. Powerslam and a running clothesline from Powers. He tries to fire up the fans, but really--after almost 10 years, is any fan gonna' think that Powers might win?! Powers gets the upper hand on Tom Pritchared as well, until Delray flies in with a slingshot spear. Greenberg tags in, ducks under Delray and gets hit with a superkick from Pritchard. They do a Cornette special of an elevated double-team flapjack drop, followed up with a decapitation type of manuever. Pritchard holds Greenberg up as Delray moonsaults from the secon rope-- kinda' taps Greenberg-- and gets the pin. Cornette had joined the commentary team and was playing up a potential Bodies/Headshrinkers title bout.

Gorilla and Macho Man have one final segment. Gorilla has heard from the "powers that be in the WWF", that they do not condone the actions of Jerry Lawler! Objects should only be used for their intent...and they can't believe Lawler smacked Droese with a garbage can. "You will never see that again". Okay, then. Ted DiBiase has a brief soundbyte, as he says Lex Luger has always had potential, but the only thing he's been lacking is the proper guidance. Mooowahahaha! Fans, we've gotta' go!

Why'd You Watch This?: Just for the 1994 connection and the fact that it was exactly 25 years ago (as of this 2019 writing). It's essentially a 1994 edition of "Wrestling Challenge"-- a coupla' jobber squashes and I guess you could call it a "feature match" of 1-2-3 Kid vs. Nikolai Volkoff. Yes, there was a time when the only noteworthy match on Monday Night Raw was X-pac taking on 1/2 of the Bolsheviks. Let that sink in.