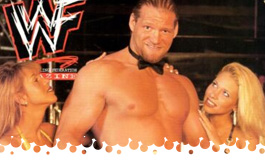 Mr. McMahon and his Stooges come to the ring for some words. Vince claims that Stone Cold has suffered a concussion, so he's forbidden from seeking any sort of revenge, for safety reasons. Austin is barred from the arena for his own protection. What a swell boss this Vince McMahon is. Earlier today, a single hapless security guy stopped Austin entering the building, but since Stone Cold is in such a good mood, he's going to have some Steveweisers and try again later. Back to the ring, Mr. McMahon introduces The Next WWF Champion Dude Love, in his corporate suck-up attire. The Dude is ready for Over the Edge, he's becoming more handsome and well educated with each passing day. They invite Dustin Runnels out, more than likely to humiliate him. Vince berates Dustin for blaming him for all of his problems, but he's going to give him a #1 contender opportunity against Dude Love (Dustin just so happens to have a bad knee). If Dustin loses, he has to work free for 30 days. Dustin accepts and attacks, but quickly falls to the numbers game.

Jerry Lawler helps a mystery person covered in a blue blanket out of a limo. He gives orders to remain inconspicuous. Everything about this show is so odd and charming.

After commercials, Lawler finds his guest listening to The Ross Report on a payphone. Remember those?

After weeks of endless teasing, Val has finally come... to the WWF. Just as I typed that lame innuendo, Michael Cole basically says the same thing on commentary, but with less wit. They lock up, trade forearms and shoulder blocks. Val isn't enjoying this half as much as his day job. Scorpio flips out of a wristlock, Val escapes a hammerlock with pummeling offense. Power slam by Venis, then the debut of his provocative hip twirling taunt. Scorpio counters into a sunset flip, then hits a running kick to the chin. Val absorbs a hard Irish whip and nails a shoulder block. Scorpio blocks the Money Shot in awkward fashion. Scorpio rallies and hits a well targeted flying splash for a good nearfall. Val no-sells for a belly to back suplex. The fans wake up as Scorpio slams Venis from the buckles. Scorpio misses his moonsault and Val climaxes with the Money Shot at 6:11. Decent non-squash debut for Val, who looked green here, but still managed to get over before it was over, **.
Winner: Val Venis

Stone Cold confronts the overly nice security guy again. He's been drinking, so now he's willing to assault the poor guy, who's just doing his job. Austin sarcastically summons medical assistance on the walkie talkie and warns that Mr. McMahon's @ss is next.

WWF Champion Stone Cold Steve Austin makes his way to the ring to his usual massive ovation. Austin defiantly declares that he can crash any party he wants, and he's getting more p!ssed at Vince McMahon with each passing day. Austin calls out Vince and company so they can settle things once and for all. Vince and the Stooges appear on the stage, and Austin is drunk enough to challenge them to a 3 on 1 handicap match. The Stooges are game, so "in interest of fairness" Vince will give Austin a handicap match against two of the three of them (you can probably guess which two). Not Austin's best night on the mic, but the fans love him anyway.

Edge vignette. He runs around in dark city streets. He'll be here before you know it.

Lawler finds his blanketed guest sulking in the corner. Jerry coaxes him, they're going to mutually protect one another.

Sable comes to the ring to an Austin-esque pop. She calls out ex-husband Marc Mero in an attempt to make an amicable split. Mero conveniently pulls out a contract that allegedly states that he owns Sable like property, so she better get back into his corner. Sounds unfair, but I don't make the rules.

Marc Mero (with his personal property, Sable) vs. Terry Funk

Mero assaults Funk before the bell and enjoys an early advantage. Funk reverses an Irish whip into the steps. Piledriver by Funk gets 2. Neckbreaker by Funk also gets 2. Mero comes back with clotheslines. The crowd gets restless until Funk makes a grumpy oldman comeback. Funk throws down the referee and hits a vertical suplex. Mero hits a low blow, Sable tries to tattle on Mero, but Funk kicks out at 2. Mero hits a TKO, but the ref is busy arguing with Sable. Funk capitalizes with a DDT to win at 4:03. Crowd pops, either because they love Funk or because this is over. Either way, *.
Winner: Terry Funk

Meanwhile, some local law enforcers are checking on the sad security guy, and it looks like Stone Cold has some ‘splaining to do.

After commercials, the police investigate Lawler and his mystery friend. Lawler has to prove once again that he's not harboring Stone Cold.

Hawk takes it to Skull in the early going, but Skull answers with a clothesline. Sidewalk slam by Skull, Chainz tags in for running elbow drops. Hawk hits an enziguri, and Animal tags for a leaping shoulder tackle. Powerslam by Animal, then an elbow drop for 2 on Chainz. The match breaks down, but Animal recovers with a powerbomb on Skull. Hawk's flying crossbody connects, Chainz breaks the cover. 8-Ball sneaks in through the crowd to change places with Skull and roll up Hawk to win at 2:45. This was no good, but kind of funny for the audaciously bad finish, ½*.
Winners: DOA

Lawler and his mysterious bodyguard head through the curtains.

The broadcast resets for War Zone, which means it's time for Jerry Lawler and his mysterious blue bodyguard to join commentary. Jerry is sick of people messing with him and reveals his bodyguard to be none other than Al Snow (with Head). Snow won't stop arguing with Head, so Jerry escorts them away.

Dustin attacks The Dude before the bell and chokes him with his corporate jacket. Pat Patterson and Gerald Brisco show up, likely to stir some sh!t. Dude takes control and smashes Dustin into the steps. Dustin answers with his patented uppercut, clothesline, and bulldog. Dustin stop to take a swing at Brisco, and Dude capitalizes with the Mandible Claw to win at 2:17. Well, Dustin is never going to get over with wimpy losses like this. Now he's working for free, and Dude still has a date with Stone Cold at Over the Edge, ¾*.
Winner: Dude Love

Stone Cold enjoys a coffee while watching Raw on a hilariously small television. The police find Austin and whaddya know, it's time for commercials. After commercials, the authorities have Austin in handcuffs, and Mr. McMahon is here to gloat about it.

The Headbangers are here for a match, but they get jumped from behind by Kae En Tai. The bell rings, so...

The Headbangers (Mosh and Thrasher) vs. Kae En Tai (Dick Togo and Men's Teioh, with Sho Funaki and Yamaguchi-san)

Mosh recovers with a power slam on Togo. Al Snow shows up in the front row to rant about Vince. Meanwhile, Thrasher hits Togo with a flying clothesline. Togo hits a headbutt and tags in Men's Teioh. The Headbangers hit a tandem power slam, but Togo breaks the cover. The Headbangers hoist Teioh for a long drop to the canvas. Togo uses a low bridge to remove Mosh to ringside, where Funaki and Yamaguchi-san are waiting to attack. Teioh sets up a neckbreaker on Thrasher, but instead hits a shameless low blow. Thrasher reverses an Irish whip, but Togo recovers with a springboard cannonball. Kae En Tai stomp Thrasher off the ropes. Togo's Swanton Bomb gets 2. Kae En Tai trap Thrasher in their corner until Thrasher slams Togo from the top rope. Funaki trips Mosh on the apron, preventing a hot tag. Kae En Tai swarm Thrasher until Taka Michinoku and Justin Hawke Bradshaw run in to break it up for the DQ at 5:22. Lively match, but the fans simply did not care, *.
Winners via DQ: Kae En Tai

Footage of Paul Bearer and Kane drawing blood to prove that they're father and son.

WWF Tag Team Championship:
The New Age Outlaws © (Road Dogg and Billy Gunn, with DX) vs. Intercontinental Champion The Rock and Owen Hart (with The Nation of Domination)

This is heels vs heels, but DX are the de-facto babyfaces for their zany promos beforehand. Both factions brawl before the bell, so the match might get thrown out. Sgt. Slaughter fails to restore order, so they cut to commercials. Back from break, the match starts with Rock controlling the arm of Road Dogg. Shoulder block by Dogg, Rock leap frogs and hits a blatant low blow. Scoop slam by Rock, then the Peoples' Elbow for 2. Owen tags and beats Dogg into the buckles. Dogg pokes the eyes, Gunn tags in to continue attacking Owen's head. Owen blocks a press slam and nails an enziguri. Rock tags for a showdown with Gunn. Dogg tags but ends up eating Rock's Samoan drop. Owen tags for a flying elbow and bites Road Dogg's ear. Road Dogg tries to fight out of the Nation's corner, but takes the Rock Bottom. Gunn saves the match. Chyna distracts the ref while Faarooq runs in to give Rock a nasty piledriver. Road Dogg gets the easy pinfall at 4:46. Brisk match with a feelgood screwjob finish, *½.
Winners and still WWF Tag Team Champions: The New Age Outlaws

Meanwhile, Austin is still stuck in the backseat of the police car in the arena. Why haven't they left yet? Find out later.

Kevin Kelly hosts Dr. Charles Woosley in the ring to reveal the results of Paul Bearer's paternity test. The fake doctor has no shadow of a doubt that Bearer is Kane's father, which means he did indeed have sexy times with Undertaker's mother. Kane and Paul come to the ring to gloat and dare Undertaker to do something about it. Paul refers to Mrs. Undertaker as a wh0re, so Undertaker storms the ring to beat on Paul until Kane takes over with a chokeslam. Vader runs in to help against Kane. Undertaker is freed up to chase Paul backstage, Vader dumps Kane with a clothesline. This is just as dumb as Bray Wyatt, Uncle Howdy, and LA Knight in 2022, but with NOSTALGIA!

Guest Referee: Sgt. Slaughter
Slaughter cheap shots Austin before the bell! Patterson and Brisco swarm Austin and try to break his leg. Patterson pulls a weapon from his sweat pants and smashes Austin in the face. Austin gets fired up and takes it to the Stooges. He beats them up like a couple of middle aged men, and Slaughter just kind of allows it. Stunner on Brisco, Stunner on Patterson! Slaughter tries the Cobra Clutch and takes a Stunner for his troubles. Dude Love runs in and Austin greets him with a clothesline. A masked goon runs in seemingly to help Austin, but then swings a chair at him. SWERVE, it's Vince, so Austin tries to kick his @ss, but Dude Love capitalizes with the Mandible Claw. The broadcast ends at 4:15, so… no contest? This wasn't a match, just a really great heat-generating angle.
No Contest

Final Thoughts: This show made me feel really happy and nostalgic. I think you should all pop open a cold one and sit down to enjoy this.