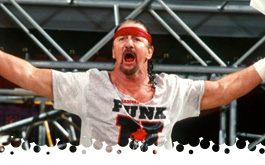 From Richmond, Virginia. Our hosts are Jim Ross, Michael Cole, and Jerry Lawler.

They open with Mick Foley having a bit of an identity crisis on the stage. He was victorious against Stone Cold at Unforgiven, but doesn't have any gold to show for it. He's offended that Goldust got the last title shot and that he's stuck in a random match against Terry Funk. Foley refuses to play Dude Love anymore and calls out Mr. McMahon to grill him. A dumbfounded Vince arrives and Mick throws his Dude Love attire at him. Vince berates Mick for his b!tching and excuse making. Vince frames Mick's match with Funk as a reward, because if he beats his best friend within an inch of his life, he'll get his rematch against Stone Cold. Vince ends this pep talk with a slap to the face, and Mick kinda likes it. WWF Champion Stone Cold Steve Austin interrupts and tears The Love Shack apart. Austin menaces Vince from the ring, and this entire scene is so wild and the fans are going berserk, I've got goosebumps.

The Nation of Domination, now with 100% more Owen Hart, are here to fight.

The Nation of Domination (IC Champion Rocky Maivia and Owent Hart) vs. Steve Blackman and Faarooq

Sgt. Slaughter preemptively ejects the rest of the Nation. Blackman aggressively goes for Owen while Rock and Faarooq brawl in the aisle. Back to the ring, Faarooq gives Rock a dominator, Owen breaks the pin. Owen tags, but Faarooq feeds him to Blackman. Faarooq and Blackman go to work on Owen's leg. Owen rakes Faarooq's eyes and makes the odd hot tag to heel Rock. Faarooq meets Rock with a piledriver, Owen breaks the pin. Rock capitalizes with a floating DDT. Neckbreaker by Owen, followed by a flying elbow, but Faarooq kicks out. Rock delivers the Peoples' Elbow for only 2. Faarooq hits a desperation spinebuster on Owen. Blackman runs wild on a hot tag. The match breaks down, Jeff Jarrett sneaks in to hang Blackman on the ropes, giving Owen the easy pin at 6:23. Plodding match with a routinely silly finish, *½.
Winners: The Nation of Domination

Intentionally cheesy Gerald Brisco tribute video, who took one for the team last week. This is an amusing way for the corporation to mess with Stone Cold.

Introductory video package for the mysterious EDGE! He looks like he could become a star if he sticks around.

D-Generation X comes to the ring to entertain the fans on the microphone. Triple H tells the ladies to “stay off the grass” but encourages them to stop by and, um, “wack the weed.” Man, with lowbrow jokes like that, how do they ever expect this guy to get over? He'll have to date the boss' daughter or something crazy. The New Age Outlaws have a score to settle with DOA and threaten to shove the tag titles somewhere the sun doesn't shine. LOD 2000 (with Sunny) interrupt and compare DX to dingle berries hanging from an old man's butt. Well, that kind of describes Road Dogg about 25 years later, I'll give them that. LOD insert themselves into an 8 man tag match later, so X-Pac warns them to prepare to s*ck it. Brutal.

Last week, Severn got tired of Jim Cornette's sh!t and severed ties with him, a true trend setter. Vega is game early on and hits a suplex. Hip toss by Vega gets 2. Severn starts punching the ribcage and hits a power slam into an armbar. Vega quickly submits at 1:37. Not good, but it was short, so there, ½*.
Winner: Dan Severn

Jerry Lawler is ready to interview Paul Bearer, but they think the camera is off for a commercial. Jerry presses Paul for the dirt on Kane, like how could he nail the Undertaker's mother? Paul explains that he was 19, had a few beers at the wrestling show, and stumbled onto Mrs. Undertaker in a t!tty outfit. Paul hadn't been with a woman yet and was still rather studly, so she threw herself at him and he couldn't resist. Lawler is amused that Bearer buried his bologna in the Undertaker's mother. They're pushing hard for the 13 year old male demographic tonight.

Back from commercials, Jerry Lawler sheepishly apologizes for the Bearer chat.

Montage of Sable working out so she can kick Marc Mero's @ss next week. You'd be shocked to find out which parts of Sable the camera continuously zooms in on.

Random heel vs. heel match, but there's no Twitter in 1998 to moan about it. Steve Blackman jumps Jarrett before the bell and dropkicks him against the barricade. Referees pull Blackman away and that's a wrap.
No Contest

Last week DX and DOA had legitimately one of the worst matches I've ever seen, so I'm extremely curious to see if they can top it. The referee preemptively ejects Sunny, tonight's Raw exists in a bizarro world in which WWF officials use common sense. The outlaws mock DOA by riding mopeds to the ring. Chyna gets tossed too, but she doesn't want to leave, so X-Pac lets her take his place in the match. And they say chivalry is dead. Road Dogg starts against Animal and quickly eats a power slam. 8-Ball tags and clubs away at Dogg with his limited moveset. Triple H tags and while his punches look far more crisp, 8-Ball drops him with a big boot. Billy Gunn makes a blind tag, but 8-Ball is ready for him with a clothesline. Gunn answers with the Fame-asser. Chyna eagerly tags in and hits Skull with a head scissors takedown for 2. DX are in firm control so they take a break. Back from commercials, DX are having their way with Hawk now. Hawk knocks Chyna off the top ropes so she gives him a sneaky low blow. The DX beatdown continues until Hawk falls backwards into a headbutt on Gunn. 8-Ball gets the alleged hot tag and runs wild. Suddenly, DOA and LOD start brawling with each other, and DX sit back and enjoy the show and presumptive countout victory at something like 8:40. Not a total disaster like last week but still pretty boring, *.
Winners via countout: D-Generation X

During the break, DOA and LOD continued brawling backstage.

Goldust vs. Kane (with Paul Bearer)

Kane strikes first, Goldust fires back with an ineffective clubbing offense. Goldust has better luck attacking Kane's bandaged arm. Kane regains control, but The Undertaker runs in to attack Paul Bearer. Kane comes to his father's aid and referees swarm them. The match is called off at 1:55. Nothing match, but the angle is good enough. Paul shouting “DAMN YOU, UNDERTAKER, THAT'S MY SON” at the camera is just campy gold, DUD.
Winner via DQ: Goldust

Video package meant to convince us that Foley and Funk have a hardcore bond. It sure does suck that now they have to murder each other.

Val Venis is having fun filming "Soldier of Love" in the woods. His co-star is none other than Jenna J*meson. It's so nice when people can enjoy themselves at work. Val is eager to enter the WWF, but Jenna wants him to back to the hole. The 13 year old male fans watching at home win again.

WWF Champion Stone Cold Steve Austin comes to the ring to a monstrous ovation. He grabs a case of beer and joins commentary. Hopefully, Lawler and Ross have their own beers, because Stone Cold doesn't share.

Guest Referee: Pat Patterson
Austin is alarmed by Patterson's last second appointment, Funk doesn't seem to care and throws Foley outside. Foley rakes the back and smashes his friend's head into the barricade. Funk answers with unprotected chair shots to the head. Foley pulls the chair away and cracks Funk on the forehead. Funk bounces Foley's skull off the announce table. Back to the ring, Foley hits a swinging neckbreaker to buy some space. Austin's headset starts having technical problems, as if someone is intentionally sabotaging him in the truck. Austin knocks Lawler out and steals his headset. Meanwhile, Funk has busted Foley open and is destroying him with a chair. Foley hits a big boot, but Funk answers with a back body drop onto exposed concrete. The brawl heads into the crowd, Foley beats up the hot dog vendor just because. Funk climbs up to a ledge and hits a moonsault! Foley recovers and gives Funk a piledriver through a table! They disappear under some bleachers so lets take a break. Back from commercials, the fight continues backstage. They return to the arena and Mick hits a DDT on the ramp for 2. Foley hits a classic clothesline over the ropes, sets Funk on the announce table, Austin worries about his beer, and Foley nails a chair assisted elbow drop onto the table! Foley trash talks Austin and then hits Funk with a DDT for 2. Piledriver by Foley, but instead of a cover, he gives Funk a piledriver onto a chair. Foley wins at 14:15! Classic Attitude Era brawl, just disappointing from a crowd heat perspective, ***.
Winner: Mick Foley

Foley isn't finished and continues smashing Funk's head into the chair. Austin chugs some beer and throws the rest in Foley's face. Foley is temporarily blinded and puts Patterson into the Mandible Claw. Foley realizes his mistake too late, and Austin drops Patterson with a Stunner. Foley is once again the #1 Contender, but it seems that Austin has the last laugh. Mr. McMahon and the disco dancers return to Dude Love's music and return the Dude's attire to Mick. They enjoy a sexy party while Austin flips them off. Could you imagine if Tony Khan did anything close to resembling this in 2022?

Final Thoughts: This Raw was written like a TV show rather than a wrestling show and you know what... it worked. Raw still hasn't gone Full Russo, so what we have is a perfectly digestible show that appeals to wrestling nerds and casual fans alike. I don't recommend that anyone hire Vince Russo back for anything in 2022, but in 1998 he hadn't completely gone off the deep end, and the result is a hot show that leaves you wanting more. Thumbs Up.