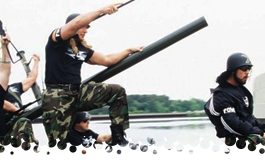 From the Hampton Coliseum in Hampton, Virginia. Our hosts are Jim Ross, Michael Cole, and Jerry Lawler. The big question tonight is Will Mr. McMahon Fire Stone Cold?

Earlier today, Triple H gets the DX troops ready to invade WCW. So goofy, how do they expect Triple H to ever get over as a main event star? Also, WWF should really focus on their own product. They hop onto a makeshift tank and ride away into battle.

Ken Shamrock and Owen Hart vs. The Nation of Domination (WWF Intercontinental Champion The Rock and Mark Henry, with Kama Mustafa and D'Lo Brown)

Owen tries to start, but Rock spends a full minute calling out Shamrock. Owen makes the tag, but then stabs Shamrock in the back (er, kicks him in his manhood), and helps the Nation serve a Pillmanizer. The match is tossed out at 1:45, and Shamrock may have suffered a broken ankle. Not really a match, just a RUSSO SWERVE!!!
No Contest

Steve Blackman tries to save Shamrock, but falls to the Nation's greater numbers. Owen puts Shamrock into the Sharpshooter. Faarooq runs in for another failed rescue. Owen's heel turn is beyond random, but the live crowd is giving him some good heat.

Dude Love, with a pair of hippies in bikinis, hosts the Love Shack on the stage. The Dude's problems with Stone Cold run so deep that he's too distracted to get it on with the ladies. Dude proposes either setting up a quick tournament between him and Shawn Michaels to become #1 contender, or better yet, Mr. McMahon should strip Austin of the gold and award it to the Dude.

Meanwhile, DX tries to get WCW's own fans to heckle WCW. The people are willing to boo Eric Bischoff, but not WCW itself.

The Headbangers (Mosh and Thrasher) vs. Terry Funk and 2 Cold Scorpio

They shake hands but Funk and Scorpio immediately take it to the Headbangers (to a light "ECW" chant). The Headbangers come right back with body drops and flapjacks. The entire match seems to be Texas Tornado style, somehow J.R. avoids making any catty comments. Mosh throws Thrasher off the top rope onto Scorpio at ringside, and then they all take Funk's moonsault! Scorpio pops up for a flying crossbody onto just the Headbangers. The brawl continues, and the ref soon disqualifies the Headbangers for a shove at 3:15. Well, it was fun while it lasted, they keep brawling anyway in wild fashion, *½.
Winners via DQ: Terry Funk and 2 Cold Scorpio

Meanwhile, DX continues annoying the arena staff at Nitro. Triple H wants to know if they can score free tickets, because that's how WCW draws their crowds.

Mr. McMahon enters the ring to boos and "Austin" chants. Vince complains about the concussion he suffered when Stone Cold hit him with a chair, and the fans think it's all very funny. Despite this, Vince isn't ready to fire Austin, because that would be too good for him. Vince has other plans, and orders Austin to defend the WWF title tonight against Goldust, with special guest referee, Gerald Brisco. If Austin lays a finger on Brisco, he's instantly fired and stripped of the WWF title. Brisco smirks while vowing to be an unbiased official. Vince thinks anyone would make a better champion than Austin, and apparently that includes Goldust.

Meanwhile, DX get shut out of Nitro's parking garage. J.R. doesn't see the point of any of this.

Bradshaw swings a bull rope to chase Jarrett out before the bell. Bradshaw hits a mean shoulder block, Jarrett answers with a dropkick. Jarrett uses his quickness to score some ineffective shots, and Bradshaw boots him down. The Kamikaze guys attack Bradshaw for the blatant DQ at 1:15. The match was just there to set up the ambush, DUD.
Winner via DQ: Bradshaw

Taka Michinoku runs in to help Bradshaw, but the mysterious masked 4th guy runs away.

Kevin Kelly tries to get a word with Dude Love, who is steamed that Goldust is getting a WWF title match before him. The Dude finds Mr. McMahon and tells him off, prompting Vince to order the cameras be cut off.

DX are back from their busy night of harassing WCW and grace us with their presence in the ring. The Outlaws ride in on scooters and are ready for action.

Gunn locks up with 8-Ball and gains an advantage with a face rake. 8-Ball clotheslines Gunn over the ropes and fends off Road Dogg. Power slam on Road Dogg, but he hilariously no-sells it and drags 8-Ball over to tag Gunn. DOA double team Gunn, but Road Dogg enters to hit a clothesline and retake control. Nothing about this match makes any GD sense. The Outlaws get about 10 seconds of heat before Skull (?) hits a back suplex for an alleged hot tag. Gunn hits a quick piledriver, but DOA make the ol' switcheroo to pin Gunn at 3:37. This might be the worst match I've ever seen, -***.
Winners: DOA

Warzone kicks off with an appearance by The Undertaker, fresh from an Inferno Match against Kane.

The Undertaker vs. Barry Windham (with James E. Cornette)

Windham happlessly eats a series of shots at the bell. Undertaker serves up a chokeslam and Tombstone Piledriver, and it's over at 0:59. This might have been a dream match under different circumstances, DUD.
Winner: The Undertaker

Undertaker gloats about setting Kane on fire last night and calls him out so they can finish it. He waits patiently through some commercials, and he's joined by Kane and Paul Bearer. Instead of fighting, Paul wails about how hard it was to take Kane to the hospital to treat his wounds, and he pleads for an end to this war. Paul reveals himself to be Kane's true father, and whadya know, we need to take another commercial break.

Kevin Kelly interviews Goldust (with Luna) about his golden opportunity against Austin. Goldust thinks he'll make a champion to be proud of. He's ambushed by Dude Love, ranting and raving about Goldust having stolen his shot.

DX return to the ring, and J.R.'s grumpy comment "I guess they're back" just hits the nail on the head. Triple H is all hot and bothered that DOA killed his buzz, and he wants to put the European title on the line against anyone. 8-Ball tries to answer the call, but Dan Severn rushes past him, while Cornette tries to talk him out of it. Cornette tries to slap some sense into his client, so Severn takes him down hard and chokes him out. Apparently, this means the match is off.

Michael Cole chats with Stone Cold Steve Austin in the locker room. Austin is all fired up, it seems like Mr. McMahon's power moves have gotten into his head.

Val Venis pulls into the set of his new film, The Big Valbowski. If I described the punchline to this vignette, the site would be flagged for adult content.

Marc Mero, minus Sable, comes to the ring to entertain us, or something. He polls the crowd for their interest in Sable, and then invites her to join him. He admonishes her for embarrassing him by stripping down at the PPV, but Sable thinks it doesn't matter because everyone enjoyed it. Sable is sick of Mero and is ready to kick his @ss in a single match, in 2 weeks.

Special Referee: Gerald Brisco
Mr. McMahon jogs in to distract Austin at the bell, but Austin takes control of Goldust with a suplex anyway. Vince hangs out at the timekeeper's table while Brisco separates Austin long enough for Goldust to come back with punches and a clothesline for 2. Austin pokes the eyes, but Goldust rolls him up for another 2 count. Austin nearly loses his cool on Brisco, and Goldust capitalizes with an ambush. Bulldog by Goldust gets 2. Austin's Stunner is blocked, Goldust whips him into the steps. Austin sends Golddust into the rails, and carefully moves around Brisco to continue his assault, but Goldust comes back with a low blow. Austin escapes a chinlock and they both go down from double clotheslines. Austin aggressively builds some momentum, but Goldust cuts him off with a sleeper, but Austin reverses into a Stunner! Brisco fakes a head injury to avoid counting to 3, and Dude Love runs in! Austin back drops Dude Love at ringside and smashes him against the announce table. Brisco pulls Austin off of Dude Love, but Vince misses a belt shot to knock Brisco out! The match just kind of ends at 8:50 with Austin celebrating like he won, so I guess he won. This was the best kind of overbooked nonsense, Austin's reign felt genuinely threatened, and all the different moving parts made for a unique sense of drama that is largely missing from any modern promotion today, ***.
No Contest

Final Thoughts: The Austin drama and DX invasion make for a landmark Attitude Era edition of Raw. Not bad for a show featuring one of the worst matches I've ever seen.