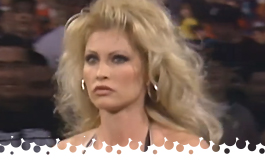 Live from the Nassau Coliseum in Long Island, New York. Our hosts are Jim Ross, Michael Cole, and Jerry Lawler.

Kevin Kelly is lurking at the cemetery where Undertaker and Kane's parents are buried.

Dude Love hosts the Love Shack on the stage. Mr. McMahon crashes the party, annoyed at all the props. He grills Dude Love for taking away his opportunity to embarrass Steve Austin last week and fines him 5,000 dollars. The Dude explains that he was motivated by peace and love, and he couldn't understand why his soulmate, Austin, would treat him so poorly. Also, Austin is popular with housewives and house goats. Dude always knew he could take down Stone Cold, he just didn't know it would be so easy.

Long Island Street Fight:
Kama Mustafa (with The Nation of Domination) vs. Faarooq

The Nation enter through the stands brandishing weapons, which makes them look far too bad-ass (but really giving the crew a chance to take down the Love Shack). Meanwhile, officials work hard to keep Steve Blackman and Ken Shamrock backstage. In the ring, Faarooq beats the snot out of Kama, and thrashes him with a beer keg. Kama comes back by attacking Faarooq's bandaged ribs with a hammer. Kama smashes a dirty trash can over Faarooq's back, and I honestly wonder if they found it on the sidewalks. Faarooq takes a beating but manages a kick to the groin. Kama regains control with body shots to the ribs. Faarooq removes his boot and smashes it into Kama's face, then wins with a spinebuster at 6:05. This was too vicious to be boring, but fans seemed taken out of it, *¾.
Winner: Faarooq

DX have a grand old time watching footage of themselves desecrating DOA's motorcycles. They plot to urinate on the fans. Yes, that's right. These 1998 Raws haven't gone Full Russo yet, but I can see we're entering Half Russo territory.

DX come to the ring so Triple H can expose himself and pee on the fans. It should be fun to see how they get themselves out of this one. X-Pac plays to the crowd as if they're babyface rockstars. Triple H recites an eloquent poem about how DOA have their heads shoved up their own @sses. Road Dogg does the OH YOU DIDN'T KNOW shtick and talks some trash about LOD 2000. Triple H is clearly having a blast while he encourages the fans to call Sunny “skanky.” Well, it's “show and tell” time, and Triple H opens his trench coat, and shoots water (?) into the crowd (while stroking the gun). They're interrupted by LOD 2000 and Owen Hart, who don't seem to appreciate the juvenile humor. Both sides are ready for a brawl, but Sgt. Slaughter holds them off, but will let them fight later.

Kevin Kelly is still on assignment at the cemetery, anticipating Undertaker's arrival.

Severn immediately catches Mosh with a fireman's carry. Mosh flees into the ropes to escape an arm hold. Mosh scores a leg takedown, Severn wiggles free. Severn sends Mosh to Gut Wrench Suplex City. Cornette interferes, so Thrasher knocks him down. Mosh and Severn trade slams, and then Severn finishes with an armbar at 2:40. Physical match, although it seemed like they were having trouble filling 3 minutes of action, *.
Winner: Dan Severn

Back at the cemetery, Undertaker thinks Kevin Kelly knows more than he's letting on and lunges at him. Aftera commercial, Kelly reveals that Undertaker saw something spooky at the grave and is rushing back to the arena.

Luna cuts a kooky promo vowing to strip Sable of her soul, mind, and clothing at the PPV. Bradshaw takes it right to Goldust at the bell and whips his jacket. Back body drop by Bradshaw sends Goldust retreating. Bradshaw catches up at ringside and sends him into the steps. Back in the ring, Bradshaw hits a Russian leg sweep, but then misses an elbow drop. Goldust chokes Bradshaw on the ropes and lets Luna get some shots in. Bradshaw escapes a chinlock but runs into a knee lift. Bradshaw reverses into a fallaway slam for a breather. Bradshaw's comeback is interrupted by a gang attack by Club Kamikaze for the DQ at 4:51. No idea why any of this is happening, but they ruined a perfectly dull match, ¾*.
Winner via DQ: Bradshaw

The fans wake up from their coma to give WWF Champion Stone Cold Steve Austin a superstar ovation. Austin is still pretty ticked off after dealing with Mr. McMahon's lies and Dude Love's attack, and accuses them of working together in a conspiracy. Austin cannot wait until Unforgiven to kick some @ss and promises to get his hands on both Vince and Mick before the night is over.

There's about a 50% chance this match will be discarded to make room for the Undertaker. Bob takes Scorpio down with a rana. Scorpio answers with a powerbomb. Funk enters for a neckbreaker on poor Bob, and unleashes chops. Bob comes back with an angry flurry of punches. Bob and Bart isolate Funk for a decent heat sequence. Funk hits some desperation headbutts and makes the hot tag. Scorpio plows through Bart with a back body drop and spin toe kick. Bart stops him with a gut wrench suplex. Bob helps with an illegal piledriver, but Bart can't get the pin. The Midnight Express hit Scorpio with a tandem piledriver, and then work together to drop Funk onto the apron. Scorpio pops the crowd with a high elevation dive! Bob blocks Scorpio's moonsault, but Scorpio recovers with a 450 splash to win at 7:04! Rare “good” match, they got the sleepy crowd into it and actually had time to tell a story, **¾.
Winners: Terry Funk and 2 Cold Scorpio

A hearse backs into the arena, could it be Undertaker?

Val Venis takes a break from showering with some ladies to make a bunch of sex puns for the camera. Let's just pretend that I wouldn't have found this to be tremendously amusing when I was 13.

Sable comes to the ring and gets the second biggest pop of the night. Michael Cole wants to know what she thinks about Luna's plans to strip her completely naked at Unforgiven. Sable isn't ashamed of her body and doesn't care if Luna succeeds in her goal, so long as she gets her hands on Luna. That's the spirit.

Paul Bearer and Kane open the back of the hearse, but shucks, we need some commercials.

Michael Cole approaches Mr. McMahon and asks if there's a conspiracy against Austin. Vince thinks Austin has been watching too many Oliver Stone movies, and he's ready for him.

After a tentative start, Owen aggressively outwrestles Gunn, and then fends off Triple H. Quick tag to Road Dogg, who is forced to contend with Hawk. Road Dogg pokes Animal in the eyes, and hauls him into the DX corner. Animal escapes and tags in Owen as they cut to commercials. They return with Owen hitting Gunn with a neckbreaker. Leg drop by Owen gets 2. Gunn answers with the Fame-asser. Triple H tags in and stomps Owen into the corner. Triple H blocks the Sharpshooter, but Owen hits an enziguri and properly applies the Sharpshooter. Gunn breaks it up with a DDT. The fans chant for LOD while Owen gets worked over. Owen hits the Outlaws with a double dropkick, and Animal storms in on a hot tag. LOD hits Road Dogg with the Doomsday Device, but Chyna distracts the ref by abducting Sunny. X-Pac hits Hawk with a chair, and Gunn steals the pinfall after a piledriver at 11:24! Yeah, ELEVEN MINUTES, I'm not even sure there was 11 minutes of wrestling on last week's entire Raw. Really mundane formula tag match that just dragged on forever, *.
Winners: DX

Kane and Paul Bearer bring a pair of caskets onto the stage, which allegedly contain the remains of Undertaker and Kane's parents. They are ready to pour gasoline onto the caskets, but
comes out through the crowd to stop them. He's too late, Paul sets one casket on fire, and Kane chokeslams Taker onto the other! This is all so phony and gross. The camera even zooms in on a bone in the wreckage. I'm endlessly amazed by the things the WWF got away with in the late 90's.

Michael Cole informs us that Undertaker is protecting his parents' remains, and Cole will never forget the look on Taker's face.

The Dude pretends he isn't intimidated by Blackman's martial arts prowess, and they lock up. Dude hits a running knee to the face, Blackman answers with some dropkicks. Blackman grabs a headlock, Dude clubs back, but Blackman kicks the lower back, forcing Dude to flee. Dude gains the upper hand and hits a neckbreaker for 2. Blackman counters with a snap suplex. Falling headbutt by Blackman, but Dude reverses an abdominal stretch, and the bell is called for immediately at 4:00 in a callback to the Montreal Screwjob. Nothing match, with an even lamer finish, ½*.
Winner: Dude Love

Steve Blackman beats up the timekeeper, because he's apparently too stupid to know who was really behind it. Stone Cold Steve Austin rushes in to brawl with Dude Love. Mr. McMahon walks tall in the ring, Austin fights through Patterson and Brisco, but Vince slips away before he can eat a Stunner. Austin sends Dude into the rails, and chases Vince up the ramp as the show fades to black.

Final Thoughts: The Stone Cold vs. Mr. McMahon saga is really starting to cook, which is good news, because the rest of this show is heading down dark Russo paths. This was a more wrestling heavy show than usual for this era, which might seem like a good thing, but that six man tag was a total snoozefest, though I did enjoy Terry Funk and 2 Cold Scorpio's spry win over the Midnight Express. Ultimately, these shows still leave me wanting more, despite some very real and serious warts.