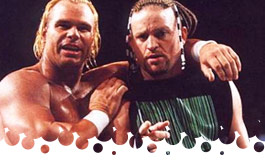 Mr. McMahon comes out to a wave of boos and Austin chants. He talks out of both sides of his mouth as he says it was hard to have Austin arrested and he benevolently had him released. Vince promises that later he will introduce a new and improved Steve Austin. This entire promo takes about 90 seconds and nicely teases the possibility that Vince may have converted the Rattlesnake (although we all know deep down he hasn't, which is part of the fun).

Severn works a waistlock takedown, but Funk gets the ropes. Fireman's carry takedown by Severn, but Funk blocks his armbreaker. Severn slams Funk and goes berserk with mounted open hand slaps. The ref forces a break, Funk's punches have little effect, Severn hits a slam into an armbar for a quick win at 2:54. This was clunky, but too short to offend.
Winner: Dan Severn

DX party their way into the building. The group now consists of Triple H, Chyna, X-Pac, Billy Gunn, and Road Dogg, and they've ruthlessly moved on from Shawn Michaels. They are deliberately casting themselves as a youth movement, rebelling against the old men in the industry (cough, cough, WCW) and Triple H declares them to be an army. This was another very good promo that accomplished a lot without dragging down the show.

DX take the party backstage, bully a producer, vandalize the area, and seem to enjoy every second of it.

Christopher pokes the bear by mocking Blackman's martial arts stick routine, and the Lethal Weapon makes him pay. Tennessee Lee saunters over to commentary for a friendly visit. Meanwhile, Christopher rakes the eyes to gain an opening, but Blackman cuts him off with a high drop. Blackman finally notices Lee, and Brian capitalizes with a suplex. Christopher hits the Stroke, of all moves, while Lee casually departs. Blackman comes back with an Alabama Slam. Thrust kick by Blackman sets up a deep armbar for the submission at 4:51. Total snooze that mainly served as a backdrop for Lee's character work, *.
Winner: Steve Blackman

Tennessee Lee returns to introduce Jeff Jarrett. Instead of riding in on a horse, Jarrett sneaks up on Blackman and smashes a guitar over his head.

Triple H triple dog dares the boys to pee on DOA's bikes, and they don't hesitate to do so. You've never seen Triple H look happier

A battleworn Cactus Jack comes to the ring to talk. He will be damned if he lets scum like DX put him away. Guys like him and Terry Funk just don't miss wrestling matches, so if Terry Funk is so hurt that he had to go home, that's saying something. When they were in the hospital together after their Wrestlemania match, Funk felt like the pain was worth it, because he could retire as a champion. Cactus admits that later on, it made him sick to hear Steve Austin become champion and get his name chanted. He demands the fans apologize to him for cheering for Austin instead of Cactus Jack. After 13 years, it's not worth it to Foley anymore, and this is the last time anyone will see Cactus Jack for a long time. The fans don't really know what to make of all this, but give Foley for this daring, nuanced heel turn.

Earlier today, the Nation of Domination beat up Faarooq in the parking lot.

WWF Intercontinental Championship:
The Rock © (with the Nation of Domination) vs. Owen Hart

Rock lets the “Rocky Sucks” chants get under his skin, but backs Owen into the corner. Owen answers with an armdrag. Rock escapes and swats the back of Owen's head. Owen flips out of a wristlock and slaps the face. Kama trips Owen and gets the Nation ejected. Rock angrily lunges but Owen dodges for a sleeper. Rock breaks out for a DDT. Shoulderbreaker by Rock, and then the Peoples' Elbow. Owen rallies and nails a swinging neckbreaker for 2. Spin heel kick by Owen gets another good nearfall. Owen blocks the Rock Bottom and nails an enziguri. Sharpshooter, but Chyna arrives to smash a bat over Owen's head for the DQ at 5:47. You can feel the angst in the arena over this result, but this match was a lot of fun with great energy and heat, **½.
Winner via DQ: Owen Hart

Mr. McMahon and some fake policemen come to the ring to introduce the New and Improved WWF Champion Stone Cold Steve Austin. He comes out wearing a corporate suit (so, looking like pretty much any other world champion in the 20 years that would follow) and appears to have been domesticated. Vince is beaming because now Mr. Austin is on his way to becoming the best champion of all time. Still, Vince is annoyed that Steve isn't wearing the right shoes and has a non-sanctioned skull hat. Austin talks about how sitting in a jail cell made him realize that he didn't stand a chance in a fight against a powerful man like Vince, and asks one of the cops to take their picture. The old Stone Cold would tell Vince to stick the camera up his @ss, but the new Stone Cold wants Vince to get the picture developed, because this is the last time he'll dress up like this. The crowd pops as Steve strips down in defiant fashion. Austin wacks Vince down low and takes a picture of him hunching over. The fans love this classic Attitude Era moment.

DOA walk to the ring, which is probably smart since DX desecrated their bikes. They complain about DX, but I'm too busy being distracted by their SS tattoos.

This is billed as the first ever intergender match in WWF history. Goldust beats up Knowles before the bell, leaving him in rough shape as Luna starts the match with a series of kicks. Luna hits a flying headbutt into the groin and wins at 0:26. Too short to offend.
Winner: Luna Vachon

Val Venis lounges on set. He is impressed by Jack Nicholson's latest Oscar win, but he's got nothing on him in his new movie “As Hard As It Gets.” It's going to be a scream when Venis enters the WWF. Hilarious stuff, if your name is Vince Russo.

Mero is sick of letting Sable have the spotlight and orders her out. Mero hits Shamrock with some body shots but misses a clothesline, allowing Shamrock to return the favor. Mero recovers with knee lifts and some jabbing. Mero reverses a rana into a powerbomb. Shamrock blocks the TKO and nails a belly to belly suplex. The Nation runs in, but Shamrock chases them out with a chair. There's no bell, but let's call this a DQ at 3:00. Match was the usual lively, TV-friendly outing with no downtime because they know they don't have much time, *.
Winner via DQ: Ken Shamrock

Mark Henry sneaks in to suplex Shamrock, allowing the Nation to descend upon the World's Most Dangerous Man.

The Undertaker makes his first televised appearance since defeating Kane at Wrestlemania. He tells Kevin Kelly about all the hard lessons he taught Kane. Undertaker is more than willing to set Kane on fire at Unforgiven and send him packing to eternal damnation. Paul Bearer and Kane interrupt from the graveyard where Taker's parents are buried. They have a slow, agonizing death planned for Undertaker, and Kane smashes the tombstones to bits. Kane sets the debris on fire while Undertaker tries to not show any emotion.

DOA rush the ring, looking for payback after DX peed on their bikes. Order is restored, and Chainz takes it to Road Dogg with clubbing offense. Dogg flees into a tag, and Gunn goes for a sideheadlock before eating a shoulder tackle by one of the twins. DOA hit a swinging neckbreaker and then a tandem slam. Gunn hangs 8-Ball up on the ropes, allowing a tag to Triple H. DX get their heat as the match strangely extends past the 4 minute mark. They return from commercials with 8-Ball making a comeback and hitting Triple H with a sidewalk slam. Chainz storms in on a hot tag and DOA clear the ring. Chainz power slams Triple H, but Gunn saves the match. Chainz back drops Gunn but then walks into Triple H's Pedigree and it's over at 6:36 (shown). This was better than I want to admit due to the sense of urgency and chaos, compiled with great crowd heat, **.
Winners: DX

DX have strength in numbers and lay waste to DOA. They prepare to finish off Chainz when the Legion of Doom run in for a late save. They run out of TV time and that's a wrap.

Final Thoughts: Fantastic 2 hours of televised wrestling entertainment. This flew by, so the bad stuff doesn't seem too bad, and there's some legendary moments sprinkled in. If you're looking for something to watch on Peacock, you could do a lot worse.