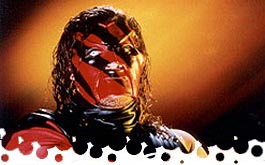 From the Gund Arena in Cleveland, Ohio. Our hosts are Jim Ross, Michael Cole, Kevin Kelly, and Jerry Lawler.

WWF Champion Shawn Michaels, Triple H, and Chyna come to the ring to entertain us. Triple H says the Road to Wrestlemania begins tonight, and since Wrestlemania is now X-rated, parents will need their childrens' permission to watch. Shawn Michaels teases that he has an offer for Mike Tyson that he won't be able to refuse. HBK turns his attention to Steve Austin, promising some Sweet Chin Music. Right on cue, Stone Cold Steve Austin marches to the ring and gets right into MIchaels' face. Before anything can happen, the lights go out, and IT'S GOTTA BE KANE! Paul Bearer informs Austin that he doesn't need to worry about Wrestlemania, because tonight Kane is sending him straight to hell. The fans are eating all of this up. Austin steals Cole's headset and rants about his laundry list of enemies. Austin is pretty mean to J.R. here, I guess they aren't besties yet.

Mike Tyson, with his entourage, and Shane McMahon arrive in a limo.

The Outlaws come out in neck braces and insist they're too injured to compete. They have their dumpster at ringside and threaten Cactus Jack and Chainsaw Charlie with lawsuits. Sgt. Slaughter isn't buying their excuses and forces them to face DOA. It looks like DOA are on their way to claiming the gold until Gunn attacks with the tag belt. As you might have guessed, Cactus and Charlie pop out of the dumpster and chase the Outlaws away for the countout finish at 1:24. I am absolutely fine with how this played out.
Winners via DQ: DOA

Brandi dominates early and hits a flying bulldog. Mero comes right back with a powerbomb for 2. Luna arrives to survey the action. Brandi blocks a TKO and hits a facebuster for 2. Russian Leg Sweep by Brandi also gets 2, but then Luna trips him. Low blow by Mero and then the TKO finishes at 2:39. At under 3 minutes, this was totally fine.
Winner: Marc Mero

Luna plants a kiss on a disgusted Mero. Goldust attacks Mero from behind, and Luna helps with a choke. Sable runs in and lights Luna up with stiff kicks and a head toss. Luna slips away, leaving Mero to berate Sable, who finally has had enough and shoves him down. The fans LOVE this.

WWF European Championship:
Owen Hart © vs. Mark Henry (with The Nation of Domination)

Sgt. Slaughter preemptively orders the Nation to the back while Owen bravely attacks Henry from behind. Owen hits a series of clotheslines before knocking Hery through the ropes with a spin heel kick. Baseball slide dropkick by Owen, but now Chyna is distracting from the ramp. Henry takes control and hits a hard Irish whip. Elbow drop by Henry gets 2, so he hits a backbreaker. Henry misses another elbow drop, but blocks the Sharpshooter. Belly to belly suplex by Henry, but he then misses a senton. Henry blocks another Sharpshooter, misses a head of steam, and Owen targets his leg with kicks. Missile dropkick by Owen and then a flying elbow gets only 2. Owen finally gets the Sharpshooter, but Chyna climbs onto the apron to break it up. Chyna shoves Owen into Henry's bear hug! Owen almost breaks the hold, but Chyna decides to low blow Henry for the DQ at 5:37! They were having a really good match until the Russo finish, **½.
Winner via DQ: Mark Henry

The Headbangers make fun of the Rock N Roll Express for being old. Taka calls Cornette an "@ss" and he's not wrong.

The RnR Express double team Taka, but Thrasher gets a quick tag and hits Gibson with a power slam. The match breaks down and Taka hits a soaring dive onto Windham. Cornette mistimes a racket attack and costs his team the match at 1:47. Nothing going on here.
Winners: The Headbangers and Taka Michinoku

Cornette is outraged and demand that the Headbangers defend the NWA tag titles against his team of losers.

Time for Warzone. I have to say, even on some of these "bad" shows, when the show resets, I usually think "Aw, Warzone already? At least there's still an hour left." That's right, folks, these shows fly by and leave me wanting more. When was the last time anyone could honestly say that about WWE?

Mr. McMahon gets booed by the live crowd and then introduces Mike Tyson and his entourage. Vince wants to know how Tyson feels about his role as special enforcer at Wrestlemania, but DX interrupts. Shawn Michaels says that unlike Steve Austin, DX won't disrespect him, but will call him out straight to his face like men. Tyson is more than happy to fight HBK, and everyone clears out of the ring. They tease a brawl, but Shawn pulls off Tyson's shirt to reveal a DX t-shirt! This is the best kind of Russo swerve, and Tyson gleefully plays along with all the DX posing. Mr. McMahon tries his best to look disappointed, but you can definitely see the dollar signs in his eyes.

Steve Blackman vs. Kama Mustafa (with the Nation of Domination)

Once again, Sgt. Slaughter tells the Nation to scram before the bell. It's kind of funny in hindsight that a stable full of future HOFers like the Nation is being used to systematically job to Steve Blackman. Kama unleashes a flurry of punches, but Blackman sends him to ringside with a martial arts kick, and then hits a slingshot crossbody. Another crossbody by Blackman gets 2, but Kama immediately answers with a belly to belly takedown. Heel kick by Kama and then a scoop slam, but Blackman blocks a double axe handle. Backbreaker by Blackman and then a stiff bicycle kick. Blackman is poised for victory when the Nation returns to dish out a beatdown for the DQ at 3:06! Better-than-expected slugfest here.
Winner via DQ: Steve Blackman

Ken Shamrock runs in to save Blackman from the Nation and clears the ring.

Steve Austin gets ready for action.

Jarrett has reverted to his Double J persona, and feels out of the place as 1998 is entrenched in the Attitude Era. Funk doesn't like country music and takes it to Jarrett, who fires back with a scoop slam. Funk leap frogs and hits a running shoulder block. Swinging neckbreaker by Jarrett, and lots of stomping and kicking. They battle over a backslide and Funk hits a clothesline. Axe kick by Funk, and a back body drop. Jarrett pokes the eyes but Funk recovers with a rolling kick for 2. Back suplex by Funk, but Lee trips him on the top rope. Jarrett easily finishes with a Figure Four at 3:32. Fine short match to reestablish what Jarrett is all about.
Winner: Jeff Jarrett

The next Wrestlemania surprise guest celebrity is revealed to be Gennifer Flowers. Yay?

Michael Cole looks for a scoop from Mike Tyson and DX, but they're already drunk and tell that pinhead to get lost.

Triple H distracts Austin on the stage and he gets blindsided by HBK's Sweet Chin Music. No match.

While Austin goes hunting DX, Kane and Paul Bearer linger in the ring. Paul tells Kane to get the bell, but instead Kane starts attacking fans. Kane finally does haul the bell AND timekeeper into the ring, and Bearer requests a 10 bell salute in memory of the Undertaker. Kane rewards the timekeeper with a chokeslam and then a Tombstone Piledriver. Bearer considers having Kane give J.R. a Tombstone, but then the lights go out and Undertaker's music and lights hit. Lightning strikes a coffin on the stage and out pops the Dead Man himself! Undertaker is mic'd up and welcomes Kane to hell. He's been healing in the darkness and now he must do the one thing he'd promised his parents he'd never do. Kane summons his pyro but Undertaker isn't fazed. They're going to fight at Wrestlemania 14, and there will be no one to stop Undertaker from pummeling Kane. This was kooky greatness.

Final Thoughts: A classic Attitude Era edition of Raw, and again, I'm SAD when it's over! I want to see what happens next RIGHT NOW! Whenever I watch or review a 3 hour Raw, I tend to be relieved when it's over, so these 1998 shows are a welcome escape.