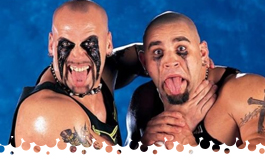 From the Heart of Texas Coliseum in Waco, Texas. Our hosts are Jim Ross, Michael Cole, Kevin Kelly, and Jerry Lawler.

The Outlaws are without their literal dumpster, so vow to bury LOD into a metaphorical dumpster. LOD rush the ring and Animal soon hits Road Dogg with a spinebuster. Enziguri by Hawk and neckbreaker. Hawk brings Dogg to the floor for a beating, but Gunn sneaks up to shove him into the steps. The Outlaws pick apart Hawk with quick tags. Hawk stumbles into a reverse head butt onto Gunn, and Animal storms in on the hot tag. The Doomsday Device is good, but Gunn distracts the ref from the cover. Gunn hits a belt shot and Animal and Road Dogg gets the easy pin at 5:00. Great heat from the crowd (who probably still thought this was all real), perfectly good short match, **½.
Winners and still WWF Tag Team Champions: The New Age Outlaws

LOD's post-match argument leads to a pull apart brawl. The fans are properly bummed out by this turn of events.

Jarrett hits a takedown and annoys Shamrock with all his strutting, and the World's Most Dangerous Man tears right through him. Jarrett lands on his head in a German suplex. Shamrock reverses a hip toss into a grapevine ankle lock, but Jeff gets the ropes. Shamrock clotheslines Jarrett out, but Cornette grabs his boot to allow Jarrett to reverse a suplex into a crossbody. Jarrett dives into Shamrock's boot, and they bonk heads for a breather. Shamrock hits a hurricanrana and power slam, but Cornette interrupts the cover. Jarrett accidentally knocks Cornette off the apron, and Shamrock gets a roll-up for 2. Shamrock bumps the ref, but Cornette misses a loaded racket swing and takes Jarrett down. Shamrock applies the ankle lock for the win at 5:45! Good match, no joke, **¾.
Winner: Ken Shamrock

Jarrett declares that he and Cornette are going separate ways.

Jerry Lawler looks for a word with a belligerent Animal, who rants about no longer having a brother. Hawk interrupts and they brawl through Lawler.

DOA (Skull, 8-Ball, and Chainz) vs. The Truth Commission (Recon, Sniper, Kurrgan, with The Jackyl)

Alright, let's get this one over with. Chainz ducks a bicycle kick from Recon that leaves him on his bottom. DOA catch Recon with double back elbows. Recon gets picked apart with punchy, kicky, chinlocky offense. Kurrgan gets the alleged hot tag but DOA hit a double power slam. Kurrgan boots a Harris twin down and finishes with the Paralyzer at 3:58. This was death, DUD.
Winners: The Truth Commission

The Jackyl is mad that Sniper wouldn't tag in, despite the victory. Jackyl slaps Sniper down and feeds him to Kurrgan. Recon considers doing something about this but cowers before Jackyl.

DX are hanging out at Shawn Michaels' home in San Antonio but have time to talk to Jim Ross. Michaels admonishes Steve Austin for attacking Chyna from behind, but she took his best shot and is still strong. Triple H knows that all of DX's enemies will be at Raw next week, so how about they break some Nielson records on the road to the DX-rated Wrestlemania 14.

Sunny struts to the ring to play ring announcer.

Cornette brags on commentary about taking advantage of Taka's language barrier to sign him to a match against heavyweight, Windham. In the ring, Windham dominates early, but Taka fires back with a springboard moonsault. Windham regains control and casually picks Taka apart. Windham is about to win with a superplex, but the lights go out and KANE IS HERE! Kane lumbers in and chokeslams Taka for what I assume is a DQ at 3:37. The fans are actually more upset about the nonfinish than they are happy to see Kane in all his theatrical glory. Match was a complete waste, ½*.
Winner via DQ: Taka Michinoku

Paul Bearer wakes up the crowd by calling out Stone Cold Steve Austin on Kane's behalf.

Michael Cole wants a word with the
on their way out of the arena. They are gleeful that they broke up LOD. They try to drive away, but they are assaulted by Chainsaw Charlie and Cactus Jack. Charlie cuts up the roof of their car while Cactus smashes it with a wired bat. The car peels away from the frightening (and totally bad-@ss) scene.

Goldust does an amusing impersonation of his father, The American Dream Dusty Rhodes, to an ironic inspirational montage of Dusty's greatest (WWF) hits. The montage turns into a farce as it glorifies what Dustin has been up to in recent weeks and focuses on the Wrestlemania 6 mixed tag.

Goldust is dressed up as papa Dusty, complete with fat stuffing and the brightest polka dots imaginable. Bradshaw gets a nice homestate pop, and the crowd lets Dustin have it for the Dusty spoof. Dustin gets an armdrag but hurts himself chopping Bradshaw's chest and retreats. Dustin grabs a mic and brands himself the only true Texan here. Bradshaw is as fed up with this as the rest of us and runs wild through poor Dustin. The Clothesline from Hell ends it at 3:37. This was dreadful, DUD.
Winner: Bradshaw

Kevin Kelly tries and fails to get a word in with LOD.

Steve Blackman vs. WWF Intercontinental Champion The Rock (with The Nation of Domination)

Rock hits a flurry of punches and kicks. Blackman answers with a clothesline. D'Lo trips Blackman, and Rock regains control with a power slam and Peoples' Elbow. The fans chant “Rocky Sucks” while D'Lo chokes Blackman behind the ref's back. Rock misses a running elbow and Blackman hits a thrust kick. Power slam by Rock, but Faarooq interrupts the count. Blackman Irish whips Rock into Faarooq and gets a roll-up for 2. Rock hits a DDT but Faarooq distracts the ref again. D'Lo throws in nunchucks, but Blackman intercepts and pummels Rock to win at 4:16! This was silly but fun, *½.
Winner: Steve Blackman

Rock confronts D'Lo, who promptly throws Faarooq under the bus. Faarooq doesn't feel that he owes Rock any kind of explanation and walks off.

Kevin Kelly asks Luna about why she wasn't in Goldust's corner earlier. Luna is a timebomb of insanity and is obsessed with getting her hands on Sable.

Sgt. Slaughter dismisses the NWA ref, despite Cornette threatening a lawsuit. I haven't seen Cornette this mad since he watched the last episode of AEW Dynamite. Mosh and Thrasher enjoy a hot start, as the champs are disheveled after losing their preferred referee. Morton thumbs Mosh's eyes for an advantage, but the match breaks down. The Headbangers knock Cornette off the apron, but he trips Mosh to give control back to Gibson. Mosh collapses to dodge a double dropkick, and Thrasher runs wild on a hot tag. They throw Gibson over the ropes, but the WWF's ref doesn't care. They finish off Morton after Cornette misfires on a racket attack and win the titles at 4:24 to a nice ovation from the fans. Another goofy match, but Mosh and Thrasher celebrating in the crowd makes it worthwhile, *.
Winners and new NWA Tag Team Champions: The Headbangers

We are treated to a tremendous video package highlighting Steve Austin's march to Wrestlemania 14.

Crowd is thrilled to see Sable, but Mero promptly sends her to the back. Mero is outraged by loud “Sable” chants at the bell. Owen drops a knee onto Mero's forehead and hits a hip toss and dropkick. Mero recovers with a clothesline and sitout powerbomb. Sable returns to a superstar ovation, sending Mero into a rage. Owen's roll-up gets 2. Leg lariat by Owen and atomic drop. Missile dropkick by Owen, who kips up for an enziguri. Owen misses a charge into the buckles, and Mero hits a series of body and head shots. Mero throws the referee down and hits Owen with a low blow. Owen reverses the TKO into a DDT, and locks on the Sharpshooter, but the ref calls for a late DQ at 4:11. Lively little match, **.
Winner via DQ: Owen Hart


rushes through a pack of referees to attack Sable. Mero holds Sable back, as she wants a piece of Luna too. Goldust joins the fray and trades blows with Mero. Luna finally backs off, but Sable demands she get her @ss back there, "b!tch. Goldust holds Luna back and Raw abruptly ends. Yes, Sable was so over that her segment could main event Raw and it would do huge business.

Final Thoughts: Total maintenance show as far as the big Wrestlemania matches go, as feuds and storylines were mostly allowed to simmer. The big happenings here were fairly trivial things, like an LOD breakup that wouldn't last, and the Headbangers winning non-WWF tag titles. They made it clear that the next Raw would be a big night, so kudos to them for being able to book ahead by more than 2 hours at this point in time.