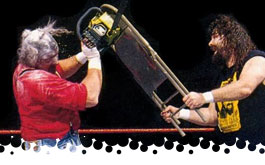 DX frolic to the ring dressed as Uncle Sam and host a campaign rally, complete with patriotic balloons. They are lobbying for Mike Tyson vs. Steve Austin to take place at Wrestlemania, as a means for HBK to avoid Austin. The fans play along with "Let them fight" chants, and then Stone Cold Steve Austin arrives to a hero's welcome. Austin gets right into Shawn's face and makes it crystal clear that he's coming for his @ss at Wrestlemania. Shawn looks humbled and Austin leaves satisfied.

Earlier today, Mick Foley explains to Jim Ross and Terry Funk why he's facing his tag partner in singles action. Foley was told that he'd be in a wheelchair by age 30 and that nobody would care. Well, Foley is now 32, and on borrowed time, and he wants to cement his legacy. Funk loves Foley like a son, but not tonight, they're going to hurt each other.

Both maniacs bring an assortment of weapons with them, including a dumpster full of plunder. They meet on the stage for a brawl. Foley looks for a suplex onto a ladder, but Charlie's inside cradle causes them to roll down the ramp. They actually make it to the ring, and Cactus hits a series of trash can shots, but can't bring himself to hit a KO blow. Cactus voluntarily gives Charlie the can, but he doesn't want to hit his friend either, at least until Cactus turns his back. Cactus puts Charlie into a can and hits a wild piledriver. They return from commercials with Charlie swinging a ladder around on his shoulders on the stage. Charlie looks for a piledriver on a table, but Cactus backdrops him into the dumpster. Cactus climbs onto the Titantron and hits a crazy elbow drop into the dumpster! Right on cue, the New Age Outlaws show up to lock Cactus and Charlie inside the dumpster, and then launch it off the stage in a classic moment. Let's call the match a no contest at 8:20 (shown). This was tons of fun, my inner 13 year old still loves this, ***.
No Contest

Back from commercials, officials, referees, and wrestlers pry open the dumpster. Foley and Funk both appear unconscious. Foley's hand starts shaking and this segment continues through another commercial break. The New Age Outlaws come back to survey their handiwork, and several wrestlers lose their temper and attack them. Wow, so there was a time in the WWF when babyface wrestlers had friends. Mr. McMahon restores order, while Funk and Foley are given oxygen and loaded onto stretchers. If I was watching this live, I think I'd have clicked over to Nitro by now. Jim Ross paints this scene to be a tragedy, as if this wouldn't have been the result had the match just continued. They're finally hauled off in ambulances.

Jim Ross interviews The New Age Outlaws about what just happened. They look a bit shaken up, and Road Dogg admits that maybe they went too far. Triple H and Shawn Michaels interrupt and defend their actions because they pushed the bar to a higher level. They'd better suck it up because the show goes on. Apparently not, because this ate up the entire first hour of Raw and we're on to Warzone.

The fans roundly boo the Outlaws, and they call off their usual pre-match promo shtick. Owen is furious about the dumpster incident and clotheslines Gunn over the ropes. Owen catches both Outlaws with dropkicks and hits Gunn with a plancha. Owen hits a vertical suplex onto the concrete and stomps Gunn back into the ring. Gunn snaps Owen's neck on the ropes and hits a neckbreaker. Gunn blocks a Sharpshooter with a thumb to the eye and hits a back suplex. Owen survives a front headlock, so Gunn hits a swinging neckbreaker. Owen gets the Sharpshooter, but is forced to get go to deal with Road Dogg, and the DQ is called at 5:27! Solid match, which benefited by the crowd's sour mood regarding the Outlaws.
Winner via DQ: Owen Hart

DX come out to join the Outlaws in beating up poor Owen. Triple H hits a DDT onto the steel stage. Triple H orders the Outlaws to swing Owen off the stage, but referees and management rush in at the last second to save him.

Michael Cole calls in from the hospital to let us know he has no new information about Terry Funk and Mick Foley. Thanks, Cole.

Mosh (with Thrasher) vs. Marc Mero (with Sable)

Mero forces Sable to put on a robe and remove his robe. He's outraged to find out that someone gave her candy and tells her to scram. Mero welcomes his new valet, "Marilyn" and it's Dustin Rhodes cosplaying as Marilyn Manson, because it's 1998. The bell finally rings, and Mero throws Mosh to the floor so "Marilyn" can slam him into the rails. Mero follows with a sitout powerbomb. Mosh comes back with a power slam and back body drop. "Marilyn" interrupts Mosh's turnbuckle punches, so Thrasher takes him down. Mero hits Mosh with a low blow for the win at 2:25. This was bad, the fans didn't care about anything once Sable left..
Winner: Marc Mero

Interview with Jim Cornette's gang of NWA has-beens. J.R. wants to know when Barry Windham will have the guts to face Bradshaw. Windham welcomes the chance to fight "Yosemite Sam" if he can find a tag partner.

Tiger Ali Singh is a rich guy with his own private helicopter. He's profiled in a Lifestyles of the Rich and Famous-esque video package.

Faarooq (with the Nation of Domination) vs. Chainz (with DOA, Ahmed Johnson, and Ken Shamrock)

Faarooq unloads punches at the bell, but Chainz answers with a tight clothesline and power slam. Faarooq recovers and hits a vertical suplex. Faarooq gets distracted by DOA and Chainz cleverly counters a chinlock into an electric chair slam. Faarooq tackles him for 2 and reapplies a chinlock. Michael Cole calls in to announce that Terry Funk has regained consciousness, but Foley is still out. Chainz rallies, but Faarooq rakes the eyes. Kama Mustafa trips up Faarooq, and the NoD argue until Faarooq gets counted out at 3:34. Well, that was dumb. Faarooq is barely holding on to his leadership role in the NoD..
Winner via countout: Chainz

Can you believe that 6 years from now, Bradshaw would be WWE Champion? Still feels weird after all these years. Jarrett starts against Funk and hits a body slam. Funk answers with a dropkick and leaping shoulder block. Funk gets tossed over the ropes for a bad landing, leaving Bradshaw to go it alone. Back from commercials, Bradshaw is making a comeback, but the RnR Express interfere, and Windham hits a clothesline at ringside. Bradshaw quickly comes back to clothesline Jarrett to win at 3:57 (shown). Terrible.
Winners: Bradshaw and Flash Funk

Bradshaw has no time to celebrate as the NWA goons pulverize him in a gang beatdown. Jarrett puts him into the Figure Four while Windham splashes him. This is far more entertaining than the match itself.

Michael Cole calls in again and reports that all hell has broken loose at the hospital. Police have been called, but the signal drops. GD it, Verizon.

Good news, everyone, Wrestlemania sold out in 90 seconds. Paul Bearer tries to unleash Kane onto Wink, but Vader interrupts for a confrontation. Vader is coming for Kane's big @ss at No Way Out, but first he sprays the Big Red Machine with a fire extinguisher. Bearer won't let Kane do anything about it now.

Gunn is in good enough spirits to do the pre-match mic work and touts the great ratings the Outlaws have provided. Austin marches in and drops Gunn and takes the fight to Dogg, stomping a mudhole. Stunner on Gunn, and I think the match is thrown out at 0:35! The fans don't care, as Austin keeps kicking Dogg's @ss.
Winner via DQ: Steve Austin

Triple H and Shawn Michaels arrive to help the Outlaws beat down Austin in front of an anxious crowd. They tie Austin's arms into the ropes while HBK smushes the WWF title into his face. Cactus Jack limps in, still attached to medical equipment, and clears the ring. Chainsaw Charlie slowly, follows, and Austin chases DX to the back. This segment puts a pretty nice bow on the night's events. Austin tears up a DX shirt as they sign off.

Final Thoughts: This is a key episode in the Attitude Era, thanks to the Outlaws's attack on Funk/Foley, and the aftermath. Yeah, it dragged in the middle, but our patience was rewarded by the main event segment. As a complete 2 hours of entertainment, this worked, and is the type of episodic storytelling that is missing in modern WWE.