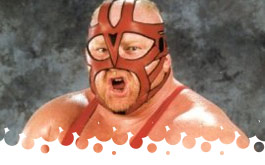 - Taped on January 20th from Beaumont, TX, with Vince McMahon and Jerry "The King" Lawler at ringside to call the action, unless otherwise noted. I seriously doubt this episode will match the chaos and excitement the last episode produced.

Ahmed Johnson vs. Crush (w/ The Nation of Domination):

Over the weekend, Savio Vega turned on Ahmed Johnson when they teamed up against Faarooq and Crush at Madison Square Garden. Crush has the entourage, but Faarooq is nowhere to be seen. Crush attacks from behind, as Ahmed seemed distracted by a gnat or something. Whip is reversed and Ahmed catches Crush with a powerslam. Ahmed with the scissors-kick and kicks to the kidneys. Whip to the corner and Ahmed with the shortest distance traveled on a diving clothesline I've ever seen. He misses a ridiculously goofy twisting elbow drop, allowing Crush to take control. He nails Ahmed with an inverted atomic drop and plants him with a belly-to-belly suplex. Crush methodically works Ahmed, whiffing on an elbow drop and applying a body-scissors. Meanwhile, Faarooq is watching from the entrance. We return from commercial with Ahmed hitting an ugly electric chair drop. Crush is the first to recover and hits Ahmed with a back breaker for two. Ahmed counters a dive from the middle rope with a dropkick in what might be the first good spot of the match. Ahmed with a clothesline, knocking Crush over the top rope. Crush distracts the referee, allowing Faarooq to attack from behind and send Ahmed into the steps. He feeds Ahmed into the ring where Crush hits the Heart Punch for three at 5:43 (shown). Wow, Ahmed doing a pin-fall job to a heatless Crush seems like quite a head scratching booking decision. No one would ever confuse this for a good match with lots of ugly execution and a bad finish. ½½

- Vince McMahon is standing by for a special interview with Shawn Michaels (no, not that interview). The Dream LIVES ON when Shawn regained the WWF Title from Sycho Sid, but on February 13th on Thursday Raw Thursday, the rematch is set, and Sid will get his opportunity to return serve. Shawn says anything goes because he's holding onto the belt by hook or crook. Then we move on to the Final Four Elimination, and the question is who would Shawn potentially face at WrestleMania? Everyone seems to have an attitude these days. Bret isn't happy with him, Austin isn't happy with anyone, Taker can be the scariest thing alive, and Vader is a wrecking machine. The WWF Championship brings out the best in people, but also brings out the very worst of those trying to get hold of it.

Vince brings out Bret Hart to continue to stir the pot. Shawn extends a hand, but Bret doesn't acknowledge. He snatches the microphone from Vince to tell Shawn to do whatever he needs to do at WrestleMania if he intends to leave the Champion. He's going to be the winner of the Final Four and wants Shawn at 100%. Vince interrupts, asking if Bret is over-looking Sycho Sid. Bret has nothing against Sid, but he's rooting for Shawn and even offers to watch his back, just so he can be the man who takes the belt from him. The Undertaker comes out next, sick and tired of Bret complaining how he's been screwed out of the WWF Title. He asks Bret to look at his history, like last year's Royal Rumble, claiming the WWF Title was rightfully his. It's time that the belt comes to the dark side. Taker tells Shawn to give his soul to the lord, because his belt and body belongs to him (as if we're going to ever see Taker vs. Shawn at a WrestleMania). Austin is out next, and he's got Jim Ross in tow, so he doesn't have to get in the ring. He recognizes an ambush when he sees it, and he sees three crybabies and little boy blue (Vince). Lurking in the background is Vader and Paul Bearer. He catches a glimpse of Vader blocking his exit, so he threatens to whoop everyone in the ring before thinking twice and storming off, all while mouthing off Vader. I can't help but laugh at Vince constantly chiming in "isn't anyone taking Sid seriously?!" in such a monotone voice. I'm not usually a fan of these "here's this person, now here's this person" sequence of promos, but there was some good digs peppered throughout. What kind of AWFUL name is "Thursday Raw Thursday?"

I love that Owen and LaFon are in warm-up gear as if they didn't work earlier in the taping, giving us the illusion of this being live. If you're running it back as a singles match, why did you put the Champions over in the non-title match? Sure, it was dirty finish, but wouldn't it make sense to have Furnas and LaFon win, then bust out the dirty finish to save face in the singles rematch? Lockup and Bulldog grabs a side headlock. Crisscross and Furnas with a dropkick, sending Bulldog to the floor. Back inside, Furnas lights up Bulldog with chops and charges into the corner with a shoulder tackle for two. Lawler calls Furnas "Mr. Personality", the kiss of death insult in the WWF. Furnas with a semi-delayed vertical suplex for two. Whip to the corner and Furnas misses a second charge, taking a big bump to the arena floor. BREAKING NEWS: The Bulldog and Owen defend the belts against Furnas and LaFon ant In Your House. WHY?! THEY JUST WON THE NON-TITLE MATCH! Bulldog slams the steps across Furnas' back and hotdogs. We come back from commercial to see Ahmed Johnson going psycho backstage looking for the Nation. Back to the action, Bulldog with a snap mare into a chin-lock. Furnas fights free, only to run into a knee lift. Furnas counters a piledriver, but Bulldog remains in control, snapping him over with a suplex for two. Furnas counters a second suplex and hits Bulldog coming off the ropes with a dropkick. Whip and Furnas with an overhead belly-to-belly suplex, followed by a sloppy powerslam for two. Whip and Bulldog counters a hurricanrana with a powerbomb for two. LaFon and Owen hop on the apron, setting up heel miscommunication where Owen hits Bulldog with the Slammy. Furnas with the school boy but Bulldog is out at two. Furnas with a sunset flip but Bulldog with the SummerSlam '92 counter for three at 7:37. Post-match, Bulldog is peeved at Owen for nearly costing him the match. So... Bulldog and Owen win the Non-Title, then Bulldog wins the singles clean, and yet we're supposed to take Furnas and LaFon seriously as challengers? Good match that started slow but picked up late. **1/2

- Highlights shown from Madison Square Garden where Savio Vega turns on Ahmed Johnson during a tag team match with Faarooq and Crush, setting up Ahmed taking the pin-fall loss via Faarooq's Dominator. We follow that with footage from Shotgun Saturday Night, where Savio confirmed his alliance with the Nation with a butt-whooping of that punk blue-chipper Rocky Maivia.

What happened to Mankind's stock lately? He feels lost and out of the loop of where the top guys are. Weird how Vader and Mankind come out, with Mankind trailing by a significant difference. BREAKING NEWS: The WWF held a press conference at the Tokyo SkyDome with the signing of TIGER ALI SINGH confirmed. Mankind and Phineas start. Phineas unloads with right hands and headbutts. NEXT MONDAY: Royal Rumble Raw! Not since 1989 has the Royal Rumble Match been broadcast on the USA Network (it was 1988, jerk) as we'll see the Rumble Match NEXT WEEK as Raw comes to us from Toronto's SkyDome. WE PROMISE. Why is Mankind selling like a geek for PHINEAS? Henry tags in and continues to clubber on Mankind. He plants Mankind in his own corner with a slam and Mankind still doesn't go for the tag. Mankind finally gets something going, tossing Phineas out, then send him back in when Vader tries to help. Wow, HEEL mismatched partners that don't trust each other. That's a new formula! Vader tags himself in and pummels Phineas with a flurry of rights and lefts. Whip and Vader with a huge clothesline to knock the Hillbilly on his behind. Mankind back in with his own brand of corner clubbering. Whip is reversed and Mankind goes for the Mandible Claw, but Henry saves, knocking them both over the top rope in the process. Mankind and Vader finally work together, doing a double slingshot to send Phineas to the outside. Henry comes over for the safe, willingly brawling in a 1-on-2 disadvantage. We get an odd commercial for the "Gheorghe Muresan Cologne". For those unfamiliar, Muresan was a 7'6" center for the Washington Bullets that garnered a level of celebrity for being really tall and was even cast in Billy Crystal's "My Giant" as an ode to Crystal's fondness for Andre the Giant. ANYWAY, we come back from the fake commercial, with Phineas still in trouble. Whip to the corner and Mankind meets the post on a charge. Henry with the hot tagging, unloading on Vader with rights. He nails both men with clotheslines and plants Vader with a slam. Vader grabs a side headlock but HOG counters with a back suplex. Vader avoids an elbow drop and drops his own elbow across the abdomen. Henry gets knocked to the floor where we get more miscommunication, with Mankind hitting Vader with a chair, and the Godwinns sneaking away with a cheap Count-Out victory at 7:44 (shown). Mankind definitely had time to hold back on that as we see in the replay. *

- Ahmed Johnson is still on the hunt, swinging a 2x4 and chasing away the Nation, but not before dumping one of the PG-13 punks into the trunk.

Final Thoughts: After last week's hot episode, this one felt a little flat. The biggest segment for the week is the promo spot where all the Final Four participants and Shawn declared their future intentions and not bothering to mention Sid as any threat to the WWF Championship. Bulldog vs. Furnas was a solid match, but why should we care about the Tag Team Title Match at In Your House with Furnas and LaFon suffering back-to-back losses? After ignoring the storyline last week, Owen and Bulldog are back at odds with each other. Speaking of partners at odds, what's the deal with Mankind and Vader? Does that go anywhere either? Time will tell.