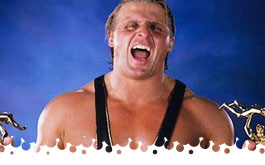 DX are at Princeton, hanging out in their limo, and Triple H and Shawn Michaels are eager to check out some COLLEGE CHICKS! Chyna might as well be invisible right now. They're going to punish Owen Hart if he crosses them again. Shawn sticks his butt out the window while HHH predicts a full moon on the campus.

WWF Tag Team Championship: The New Age Outlaws © vs. The Godwinns vs. The Truth Commission vs. The Headbangers

Road Dogg calls all the other teams "losers" in a promo so everyone gangs up on the Outlaws to start. The Headbangers try to play babyface heroes while the Outlaws take a break. The Godwinns work over Mosh, then the Truth Commission works over Henry. Billy Gunn fails to clean house on a would-be hot tag, but he manages to clock a Godwinn with brass knuckles and wins at 4:08. Abysmal opener, DUD.
Winners and still WWF Tag Team Champions: The New Age Outlaws

Video package highlighting Hawk and Animal's history as the Legion of Doom and the difficult road to return from injuries (courtesy of the New Age Outlaws).

The parking lot cam is waiting for DX's limo, but Stone Cold's truck peels in.

Stone Cold Steve Austin drives his truck into the arena and receives a hero's welcome from the fans. Austin explains to Michael Cole that the Royal Rumble is real simple, he'll just throw anyone's @ss out who crosses him. Austin knows he's a marked man and draws a bullseye on his own chest, daring anyone in the locker room to step up.

DX's limo finally arrives, in case you were worried.

Back from commercials, a large truck is blocking DX from entering the venue. Triple H and Shawn Michaels exit the limo to investigate, but the camera cuts away.

Kurrgan (with The Jackyl) vs. Jimmy Cicero and Lance Diamond

Jackyl joins commentary for some "intellectual intercourse" while Kurrgan effortlessly dismantles the jobbers. Kurrgan puts Cicero down with The Paralyzer at 1:50. Productive squash.
Winner: Kurrgan

Kurrgan isn't satisfied and piles the jobbers for a double visual pinfall. Jackyl hands Kurrgan a football helmet so he can rip to shreds, in case you needed further convincing that he's a monster.

Marc Mero is set for action, but first addresses his situation with Sable on the mic. Or he would if the mic worked. Sable's music hits, but it's Dustin Rhodes cosplaying as Sable. Sabledust obediently removes Mero's jacket.

Marc Mero (with Sabledust) vs. Vader

They lock up and Vader muscles Mero into the buckles. Mero returns fire with punchy, kicky offense. Vader gets tripped by Sabledust, allowing Mero to hit a tackle. The real Sable arrives to a superstar reaction and attacks Goldust with a kick. Mero tells her to scram. Vader throws Mero into the ring steps, and somehow Mero hasn't been counted out. The Vader Bomb connects, but Sabledust smashes a coconut over Vader's head for the blatant DQ at 2:58. Amusing crapfest, DUD.
Winner via DQ: Vader

The DX limo returns. Shawn Michaels and Triple H look hobbled, but Owen Hart is nowhere to be seen.

Meanwhile, Vader has been left in a heap in the dressing room, possibly by Stone Cold.

The Nation of Domination (Intercontinental Champion The Rock and D'Lo Brown, with Kama Mustafa) vs. Ken Shamrock and Mark Henry

Rock doesn't like Henry's "Rock Sucks" shirt and vows to rip it off his fat, ugly, @ss. Rock has to deal with Shamrock first, and gets eaten alive early on. Rock recovers with some punching. Brown tags but runs into Shamrock's leg lariat. D'Lo clotheslines Shamrock into Rock's cheap shot, and the NoD are suddenly in control. Peoples' Elbow gets 2, and Shamrock answers with a power slam. Hurricanrana by Shamrock, who fights off NoD as if he doesn't have a tag partner. Shamrock goes for the ankle lock, but Henry turns on him and joins the Nation! The match is called off at 3:48 while the Nation put the boots to Shamrock and give Rock a visual pinfall. Routinely nothing match, but good angle.
No Contest

Michael Cole talks to the Nation of Domination backstage. The Rock says he recruited Henry into NoD for Faarooq, who apparently was caught off guard by the previous swerve.

D-Generation X, consisting of WWF Champion Shawn Michaels, European Champion Triple H, and Chyna come to the ring to talk. HHH says they flushed Owen Hart down the toilet and then hits on the college girls in the audience. Shawn Michaels dismisses Mike Tyson's title of "Baddest Man in the Universe." They're interrupted by a bloody Owen Hart on the titantron. Owen is a survivor and pledges to make DX's lives a living hell. Owen enters the arena with a crutch and referees rush in to keep him from brawling with DX.

The RnR Express already look really old in 1998. I think they looked better on Powerrr in 2019. DOA get a hot start, and seriously, did ANYONE notice the "SS" tattoos on their arms in real time? The RnR Express manage to come back with tandem offense, but DOA muscle into a quick comeback, prompting Cornette to interfere with a racket shot and DQ at 2:30. Total disaster, DUD.
Winners via DQ: DOA

Cactus Jack hangs out on the football field at Penn State University. He reminisces about all the wars he fought against Terry Funk, which resulted in them becoming close friends. They are on the same page and the New Age Outlaws are in big trouble.

Goldust and Luna are cosplaying as Dude Love. This sends Mankind into a rage and he hits a quick back body drop. Mankind applies the Mandible Claw, but Austin storms the ring to hit Stunners and draw the DQ at 0:26. The fans are pleased, so let's move on.
Winner via DQ: Mankind

J.R. and Lawler interview Mr. McMahon on the Titantron about Mike Tyson's status. Vince reveals that Tyson will appear on Raw next week.

Sunny, dressed as a cheerleader, frolics into the ring to play ring announcer again.

Taylor outmaneuvers Castillo and hits a dropkick. Taylor faceplants Castillo onto the ring frame, but misses a flying axe handle into the rails. Taylor comes right back with a flying clothesline. Taka tags and hits Castillo with a scoop slam and elbow drop. Quick tag to Vega puts Taka on defense. Hot tag to Taylor, who lights Castillo up with chops. Taylor lands on his feet in a moonsault and hits a back body drop. Taylor and Taka hit Vega with double dropkicks. Vega reverses Taka's moonsault into a powerslam at ringside. Castillo hits a super reverse suplex to pin Taylor at 4:35. Amazing, this resembled a normal match and had a finish.
Winners: Los Boricuas

Owen Hart runs in swinging a crutch to gain a measure of revenge against Los Boricuas.

DX come back for the main event segment and to welcome Kane to the group! Instead, Undertaker's music hits and the Dead Man arrives on the scene. Undertaker tells Shawn Michaels to mind his own business and goes for the throat. Chyna steps in, and Triple H swings his crutch at Taker. Michaels drops Undertaker with Sweet Chin Music and smashes the crutch over his back. The lights go out and Kane makes a dramatic entrance to save his brother. Kane and Undertaker share friendly gestures as Kane's pyro goes off. I don't have chills, you have chills.

Just kidding, the real main event segment is a Royal Rumble drawing. The WWF roster fills the ring, but Ken Shamrock picks a fight with the Nation of Domination. The Honkytonk Man randomly appears to distract everyone long enough to stop brawling. Cactus Jack comes to the ring, and then Stone Cold Steve Austin rushes in from the side to hit a Stunner and backs off while everyone brawls. Savio Vega, D'Lo Brown, and The Rock jump Austin on the stage and the show just kind of ends.

Final Thoughts: You can get away with dumpster fire shows like this when you have stars as hot as Austin, Sable, DX, Kane, and Undertaker were.