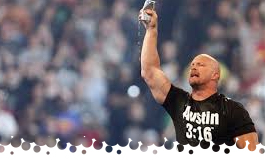 Live from the New Haven Coliseum in New Haven, Connecticut. Our hosts are Jim Ross, Michael Cole, and Kevin Kelly.

Faarooq (with the Nation of Domination) vs. Ken Shamrock

Faarooq jumps Shamrock as he enters the ring for a brief advantage. Shamrock tosses Faarooq out and brings him back in with a vertical suplex. Faarooq reverses into a slam and throws Shamrock out while D'Lo Brown and Kama Mustafa hover. The Rock makes a decidedly late and casual arrival as they cut to commercials. They return with Shamrock reversing into a backslide, but Faarooq retains control with a snapmare into a chinlock. Faarooq hits a strange looking slam for 2. Shamrock hits a desperate hurricanrana. Faarooq rakes the eyes, but Shamrock reverses an Irish whip into Mustafa's chair, and wins with the ankle lock at 5:12 (shown). This was pretty clunky and got eaten up by the commercial break.
Winner: Ken Shamrock

The Rock bickers with Shamrock, but they're interrupted by Stone Cold Steve Austin storming the ring and dish out Stunners and then leave through the crowd.

Jim Cornette and some business men march to the ring. Back from commercials, Cornette complains about the lack of tradition in the WWF. He's taken the initiative to bring in the president and vice president of the NWA (crowd boos them). They have the NWA North American Championship in their possession and will award it to the winner of the next match.

The fans are less enthused about this match, but we haven't reached the postmodern era of chanting for the commentary team, so they just sit on their hands instead. Jarrett struts after hitting an armdrag, prompting Windham to fire back with snake eyes. Vertical suplex by Windham gets 2, as does some power slams. Lariat by Windham but Jarrett saves himself with a rope break. NWA execs distract the ref while Cornette smashes his racket over Windham's back. Jarrett gets the easy pinfall at 3:40. This certainly failed on every conceivable level, DUD.
Winner and new NWA North American Champion: Jeff Jarrett

Austin returns to the ring to give Jarrett a Stunner, because Jarrett is also in the Royal Rumble, and because why the hell not?

Backstage interview with Ken Shamrock. He's feeling a bit salty about the Stunner from Austin, and hopes to find him one on one in the Rumble.

Sunny comes to the ring dressed like Britney Spears to serve as a guest ring announcer. Was Spears even a thing yet? My memory is foggy. (Editor's Note: nope. Britney was still a few months away. It's the common "school girl" outfit that existed for decades...and was once again made popular by Aerosmith videos with Alicia Silverstone in the 90's)

The Truth Commission (Sniper and Recon, with Jackyl) vs. DOA (Skull and 8-Ball)

So we get faux-South African militants vs. actual Nazi bikers. Good times in 1998. I wonder what the good people at Peacock TV think of the “SS” tattoos on DOA's arms. Kurrgan shows up late as the brawl abruptly ends with DOA winning at 3:43. Just awful, DUD.
Winners: DOA

Kurrgan puts a Harris twin into a claw. Jackyl is the only man who can control Kurrgan and he proves it by calling off the big man.

DX, consisting of WWF Champion Shawn Michaels, European Champion Triple H (in a wheelchair), and Chyna come to the ring to talk. HHH is distracted by Chyna's fancy new breast implants, but gets down to business to mock Owen Hart. Owen appears on the Titantron and says he wants Triple H to heal so he can break his other leg later, because he has a black heart. Triple H isn't all that scared and warns Owen to watch his back, because DX is “bigger than all of us.” Yes, the WWF Champion just stood around doing nothing in a segment meant to push a European Championship feud.

On Shotgun Saturday Night, Vader won a match with a MOONSAULT!

They switch over to Warzone, with Jerry Lawler joining Jim Ross on commentary.

Owen is distracted by Los Boricuas at ringside, but still manages a Thesz Press and turnbuckle punches. Back body drop by Owen and a missile dropkick. DX show up on the stage, distracting Owen long enough for Vega to throw him out. Vega hits a wild spinning heel kick and puts on a chinlock. Owen breaks free with a chinbreaker and nails a crossbody for 2. Los Boricuas drag Owen to ringside for a beatdown and serve him up for Vega. The ref ejects Los Boricuas while Owen rallies in the ring. A second referee arrives to call the match as Owen locks on a sharpshooter. Owen has to knock Jesus off the apron, but manages to roll Vega up at 4:09. Totally fine TV match.
Winner: Owen Hart

Owen wants a piece of DX, but gets beaten down by Los Boricuas again. They deliver Owen to DX, and Triple H hits some cheap slaps to the face. There's still a bit of Greenwich Snob in Triple H as he pays off Los Boricuas.

Paul Bearer waddles to the ring to clear the air about his personal drama with Kane and Undertaker. His feelings are hurt, so he hopes that Shawn Michaels will destroy Undertaker at the Royal Rumble. He hates Taker and blames him for taking Kane away from him. Paul pleads for Kane to come back because he took such good care of him over the years. This was goofy and I can only imagine the b!tch-fit Twitter would have if something like this aired today.

Video recap of Marc Mero mistreating Sable, like making her wear a potato sack, or belittling her to the point of tears. Tom Brandi has been sticking up for Sable, which means they have no choice but to fight.

Mero backs off and hides behind Sable in order to hit a cheap shot. The fans chant "Sable" as Mero punches away at Brandi. Mero lets the fans get under his skin and Brandi trips him on the top rope. Brandi hits turnbuckle punches and a flying bulldog for 2. Mero answers with well aimed kidney punches. Brandi throws Mero out and onto Sable. Mero blames Sable for his misfortunes, and Brandi tosses him aside and helps Sable up. Mero interrupts Brandi's rescue with a double axe handle, seemingly injuring Sable's ankle. Back to the ring, Mero hits a TKO. Mero prepares a second TKO, but Austin runs in to Stun him for the DQ at 4:09. The fans are totally okay with this finish, and I guess so am I.
Winner via DQ: Marc Mero

I'd say there's a 90% chance that this match ends with Stone Cold Stunners. Goldust enters wearing Black Face and an afro wig, and how in the blue hell did the Peacock censors miss THIS?!? I mean, they removed Roddy Piper from Wrestlemania 6 for this exact same stunt. Funk takes exception to this (for some crazy reason) and dominates the early going. Goldust gains control from ringside and I am so distracted by the black face, I don't know what else to say. Quick comeback by Funk, hitting a suplex. Luna shoves Funk off the top rope in full view of the ref so that's a DQ at 2:34. Dreadful, DUD.
Winner via DQ: Flash Funk

Goldust runs for his life when Vader attacks.

Video recap of Steve Blackman having a hard time getting situated in the WWF because he's simply too violent.

Video recap of Terry Funk returning as Chainsaw Charlie to help Cactus Jack against The New Age Outlaws. He cut his way out of a "box like structure" to make the assist.

I'm not going to lie, I love the Outlaws' South Park Cartman t-shirts. Makes me feel like I'm 13 again. The Outlaws have their way with Mosh early on, but Thrasher flies in with double clotheslines. The Outlaws regroup at ringside, and Gunn leap frogs Mosh, but misses a dropkick. Mosh hits a hip toss and applies an armbar. Gunn counters with a power slam. Road Dogg runs into Mosh's arm drag. The Head Bangers take control, but get distracted by the Godwinns, in full Confederate gear, on the stage. The Outlaws take advantage and cut off Thrasher. Mosh gets the hot tag and goes on a punching spree. The Head Bangers hit a double flapjack on Gunn. They can't hit the Stage Dive, and Gunn steals the pin at 5:00. This was only kind of awful, ¼*.
Winners: The New Age Outlaws

The WWF are negotiating with Mike Tyson to appear at Wrestlemania. Don King sends in a video promo promising to work with Vince McMahon to bring us one of the greatest shows on Earth. Tyson will be at Wrestlemania for our pleasure, at an affordable price. The rest is history.

Quite a bit of footage from the first ever Hell in a Cell match between Shawn Michaels and Undertaker airs. They'll meet again in a Casket Match at the Royal Rumble.

WWF Champion Shawn Michaels comes to the ring to call out The Undertaker. Shawn hopes Undertaker will have more guts than Owen Hart did earlier. Michaels makes light of the Casket Match, since he's beaten Undertaker time and time again. Shawn dares Taker to drag his big dead @ss to the ring so he can smack him around. Taker's music hits and some druids roll a special "S*ck It!" casket to the ring. Michaels thinks Triple H and Chyna are inside (like last week) but they show up on the stage waving their arms to warn him of danger. Undertaker pops out of the casket and drags HBK in to end the show. This was cheesy goodness.

Final Thoughts: This was a whole lot of yuck. Do yourself a favor and skip this stinker.