Hello again, everyone, it's Gorilla Monsoon and your host, Bobby "the Brain" Heenan. In a follow up to the running gag, Gorilla confirms that he contacted LJN about the Heenan wrestling dolls and a half dozen were, in fact, sent to Beverly Hills... but the Brain refused to pay the 12 cents postage due. Gorilla teases him that his doll/figure has a tail. And, yes, this episode does in fact qualify as true Halloween Havok, as you'll see. But with so much going on in the World Wrestling Federation, let's get down to ringside for...

Corporal Kirchner vs. "The King of Wrestling" Harley Race

We jump to the Boston Garden from September 6, 1986. If you're following the evolution of Race from "Handsome" into "King", he doesn't have his crown, but has his new robe and entrance music, added in the few days since "The Big Event". Race struts after an armdrag, then eats a backdrop as Kirchner takes over. The pride of the 82nd Airborne targets Race's left arm. Race tries a suplex, but Kirchner flips out of it and delivers a slam. Back to the arm, cuz it's tradition. Race dodges, sending Kirchner to the floor, then hops out to smash him into the barricade and land a diving headbutt. That's not enough fun, so Race nails him with a brainbuster suplex on the floor! Race suplxes him into the ring, then misses a headbutt from the second rope. This would be a good spot for Kirchner to unload with some unique offense, but he just headbutts and punches. Race sells it by back-flipping himself over the ropes. They fight on the ring-steps and Race allows himself to slide, backwards, to the floor. Race tries to re-enter via the top turnbuckle, but Kirchner press-slams him to the mat. Kirchner tries a second-rope elbowdrop, but again fails his airborne training as Race avoids it. Double shoulder-block sends both guys to the mat. Coupla' kneedrops score 2 for Race. Suplex attempt, but Kirchner reverses it into his own for 2. Kirchner with a sleeper-hold, but Race nails him in the Little Corporal. Nice piledriver from Race gets 2, until Kirchner puts his leg on the bottom rope. They fight outside, with both guys going head-first into the timekeeper's table. Into the ring, where they hit the ropes and trade clotheslines. Kirchner goes for a slam, but both guys flip over the ropes to the floor, in a very scary looking spot. They return to the ring, where they blow the finish somewhat. Kirchner leaps from the top rope with a flying bodypress and they try to do the "momentum carries him over" spot. Looks very sloppy, but Race manages to turn it into a small package and steal the pin. Kirchner threatens him on the house mic, but Race replies: "the king only deals with peasants for so long". They fight outside, but it's ended when Race beats the tar out of Kirchner with a chair. Wow, Race looked like a million bucks, again. Kirchner's flaws were evident, but this was still an entertaining match. 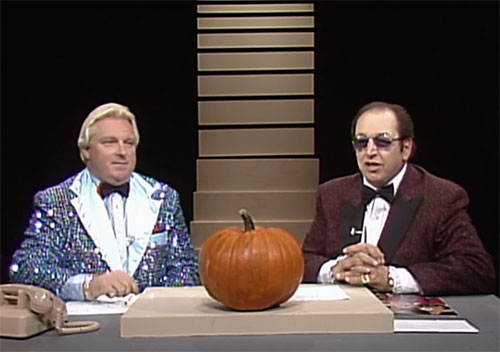 Joined-in-progress from Boston Garden, from the October 4, 1986 show. A chinlock is happening, so The Wizard (Curtis Iaukea) wanders over to ringside to visit/YELL with the announcing crew of "Mean" Gene Okerlund and Gorilla. Oh, and that 80's female WWF ref, Rita Marie (Chatterton), is working this match, too. While they acknowledge that Sika has experience, they're treating this like he's never been in the WWF, before. Sika with a slam, some kicks, the Greco-Roman nose-bite and the EVIL back-rake. Allen fights back and hits a standing drop-kick, but eats turnbuckle on a charge. Sika drops a headbutt and gets the 3 count. Yup, this happened. Just a squash for the returning Sika.

Gorilla begins carving the pumpkin, but Heenan's a little leery of the large knife he's using.

Piper says he's never had or wanted any friends, referring to Bob Orton and Magnificent Muraco. He also mentions last week's mouthwash attack on Jimmy Hart. He concludes with "Y'see, I'm Rowdy Roddy Piper. Just when you think you've got all the answers...I change the questions."

More from Boston on October 4. A quick look-up says Mr. X is a sub for Dory Funk, who recently left the WWF. "Dirty ol' Man Mean" Gene makes sure to reference the "very attractive referee, Rita Marie". X stalls, then is whipped to the ropes where he choreographs a chop from Tama. Funk tries a slam, but Tama slips out and delivers his own. Haku tags in and chews off Funk's arm. Sorry, it's just a regular armbar, but Haku does clothesline him over the top rope. Haku does a nice rolling chickenwing takeover into a head scissors on X, then tags in Tama for a series of double-teams. Islanders remain in control and on the offense for the majority of the match. Bad guys get a move in, but are summarily frustrated, as it's quickly countered by an Islander. They finally take over with a cheap-shot and thump away on Tama. Slam into a back-breaker gets 2 for Funk. Shoulder-breaker from Funk, then he conencts with a fistdrop from the second rope for 2...and it looks like the referee blows the count. Reverse neck-breaker works for Funk, so he tries it again. Tama reverses it into a suplex, but can't make the tag as Mr. X distracts the ref. Whip to the ropes and dual clotheslines floor both Tama and Funk. Hot tag is finally made to Haku, who beats away on X. Slam, headbutt, suplex and more chops from Haku. Tag off to Tama, who connects with a very nice flying top rope splash to get the 3. No real drama, but the action wasn't too bad.

As Volkoff sings the "Russian Anthem", the cameras catch some guy in a USA flag shirt, standing and saluting. This is from March 1, 1986 at the Baltimore Civic Center. Same night/broadcast as the 1986 Slammy Awards. Gorilla is joined by Jesse "The Body" Ventura on the call. Sheik attacks before the bell, beating away on Kirchner and back-dropping him. Straddle-splash on the ropes and Blassie pulls Kirchner's hair for good measure. Volkoff misses a charge into the corner, so Steele comes in and chomps away on both bad guys' arms. Steele punches away, but soon gets caught in the opposite corner and worked over. Sheik with a loaded boot shot, then slaps on the Camel Clutch. Kirchner makes the save, then tags in to punch away on both guys, including the "double noggin knocker". Kirchner splits Sheik's legs, then drops the dreaded crotch headbutt. Volkoff makes it back in and ...stomps. Whip to the ropes and Volkoff connects with a kneelift. Steele returns with his trusty foreign object and bites the nose. Kirchner with a sunset flip and a small package, both for 2. The ref begins arguing with Steele, allowing for the heel double teaming. Kirchner connects with his backdrop finisher, but Sheik sneaks in, kicks Kirchner in the back and drapes Volkoff over him for the 3 count. So if you're scoring (and we are), Kirchner just jobbed to a KICK IN THE BACK.

With Gorilla carving a jack-o-lantern, Heenan takes over as "host" and is continually flustered. He has the matches confused, and his delivery man keeps calling for directions.

Umm...why? Pretty sure this is a few months old, at least. Jim plays and sings her a song (fairly well, actually), then takes us on a tour of the kitchen. The "joke" is that Jim likes training in the kitchen with tires and an old mattress. He also demonstrates the amatuer "referee's position" on Granny's dog. Heenan: "that house should be in Better Homes & Slums"!

Yes, this is happening. Joined-in-progress from Boston Garden, with Diamond working a standing side headlock. Criss-cross (JUMP! JUMP!) and Diamond with a drop-kick. X works a hammerlock and the Society of Resthold Haters makes their presence known. X with a double axe-handle from the second rope, but misses a leg-drop. Another headlock happens. Diamond with a back-drop, jumping head-butt, slam and an elbowdrop for 2. Another headlock happens. They hit the ropes and X connects with a surprise sickle clothesline...and that gets the 3. Well, I suppose this gives X some level of credibility.

Gorilla puts a paper crown and a blanket on his jack-o-lantern, saying it resembles Harley Race. 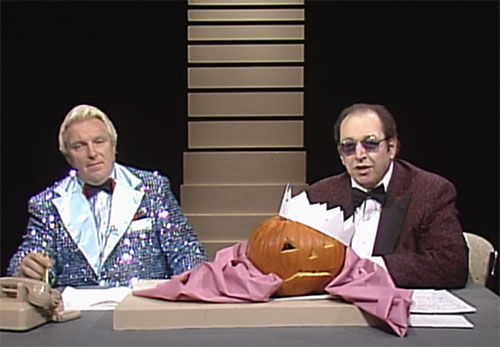 Valentine laments how they were up all night traveling, and thus exhausted, before their recent Saturday Night's Main Event title 2/3 falls match against the British Bulldogs. They both seem confused that it was a 2/3 match and say they should've won, since they got the first fall.

From the June 1986 Boston Garden show and, yeah, I think this headlined several B-shows around the time. They start with some slow collar-to-elbow tie-ups, until Bundy gets a cheapshot forearm in. Bundy misses an elbowdrop, so JYD sends him to the floor with his crawling headbutts. Back in, where Bundy no-sells a charging slouderblock, then they go into a brawl. Both guys wobble on the rops after each connecting with a clothesline...and you'd think that they just ran a marathon. More punches. More headbutts, as some fans begin tossing trash into the ring. Kneelift from Bundy and a mini-splash into the corner. More punches. More headbutts. For no real reason, JYD hops and grabs his chain, causing Bundy to bail. Bundy takes his time coming back and powers JYD into the corner. They both grab the chain and fight over it. Referee Danny Davis tries to grab it, but gets tossed by JYD, causing the disqualification. Afterwards, JYD attacks Davis and slam him in the middle of the ring. Fans liked chanting "J-Y-D", but seemed to poop all over this. Sure, they shouldn't have been expected a mat classic, but this was no worse that the usual punchy/kicky they aired. Back in the studio, Gorilla stirs the Danny Davis pot, saying he displayed some "questionable antics".

"Well wrestling fans, that wraps up another week". Heenan's package finally arrives and he opens his figure ("doll") right as the credits roll.

Why'd You Watch This?:
Musta' been slim pickings in the video vault, as somebody green-lighted TWO matches, each, for Corporal Kirchner and Mr. X on the same episode! No real WWF-wide angles or anything advanced with the remaining wrestling and interview segments, though. The inclusion of the HBJ segment is puzzling. But I guess they've been running TNT left-overs and other time-eaters on each episode for awhile. Yet the in-studio antics are getting better, especially Heenan's dead-pan deliveries of insults. This is one of those Prime Time episodes where it really feels like Gorilla and the Brain are having fun. I mean, they used a pumpkin and a "doll" as the meat of their antics...and it was entertaining.