Hello again, everyone, it's time for Prime Time Wrestling with Gorilla Monsoon and your host, Bobby "the Brain" Heenan. My enthusiasm for recapping these is about a "2" on a the ol' 10 point Recap-o-excite-a-meter, but since we're in the middle of (the 7th Annual) DWS Halloween Havok, I'm suddenly inspired to do an "October Wrestling" episode! Well...next week's episode will probably be more Halloween themed than this one, but WHAT DO YOU WANT FROM ME?! Close enough! This episode opens with a cluttered desk full of LJN dolls, after last week's fun. There's still no Bobby Heenan doll, though. Heenan complains: "if they have a two-inch Mean Gene doll with a bald head, they've got to have one of me"! Also, in the intro, there was a quick screen message advertising: "Winchester. Load up with the Legend", over the usual match antics. Weird. But with so much going on in the World Wrestling Federation, let's get down to ringside for...

We start off north of the border in Toronto's Maple Leaf Gardens from September 28, 1986. Gorilla Monsoon and Billy Red Lyons have the call. To suck up to the local crowd, Kirchner enters on that enigmatic RAMP waving both the US and Canadian flags. Gorilla torques me off by saying Muraco won the Intercontinental Championship from Pat Patterson, which is doubly wrong! He was a two-time champ, each time beating Pedro Morales...who is also currently on the roster! Argh! Initial lock-ups are fairly animated and last a bit longer than usual. Criss-cross action, but Muraco grabs the rope, hopes outside and stalls. Side headlock from Kirchner, then they hits the ropes again. Muraco drops down to avoid, but Kirchner hits him with a fist-drop. Kirchner misses an elbow from the second rope. So much for that "Airborne" patch. Swinging neckbreaker from Muraco, followed by a vertical suplex for a 2 count. Kirchner gets tossed out and Fuji gets a shot in. After getting knocked to the floor frequently, Kirchner finally rolls back in, but is dead weight and gts thumped around by Muraco. Kirchner makes the comemack with a clothesline and an atomic drop to send Muraco over the top rope. Kirchner suplexes him back in, but Muraco turns it into a cradle and steals the pin. Match was about average until Kirchner got tossed out. Things really deteriorated at that point and the crowd began boo'ing.

We're suddenly back to June 23, 1985 from the Boston Garden, as Valentine is the Intercontinental Champ and has Jimmy Hart. Gorilla is joined by "Mean" Gene Okerlund on commentary. No idea why this is suddenly included, but they don't try to cover it up, as they have the date and location on the screen. Valentine tries two elbows to the head, but that never works on JYD. JYD goes into his rolling headbutt sequence as Valentine bails. Back inside for an atomic drop from JYD and a... punch...for a 2 count. Arm-wringer, diving headbutt and a hammerlock (heh. That's appropriate) from the Dog. Valentine fighs his way back with elbows, splits the legs and drops a headbutt, followed by the big windy elbowdrop. JYD stops selling and they go into a brawl. Valentine does his traditional face-first flop, but JYD misses a diving headbutt. Double clothesline and they're both down. Valentine goes for the Figure Four, but JYD kicks him off into Jimmy Hart, then rolls him up from behind for 2. A quick small package from JYD gets another 2 and fans are pissed, tossing trash into the ring. Jimmy Hart distracts, allowing Valentine to attack with a charging knee to the back. Valentine makes the cover, with Hart holding down JYD's legs, and gets the 3 count. Afterwards, the referee reverses the decision and awards it... via COUNT-OUT...to JYD. I think it was officially a reversal into a disqualification, but the ring announcer said "count out". This was just JYD's popularity and Valentine's wily tactics carrying a match.

Funny bit, but during the commercial studio break, Gorilla mentioned that this match was "a year-and-a-half ago". In the wrap-up sgement, he said it was "over two years ago". Time flies. Heenan and Gorilla segue into a discussion on referee Danny Davis, to pump up that angle.

The Bees discuss their "masked confusion" gimmick, then go into the generic "we want to be tag champs" schpiel. "Jumpin'" Jim Brunzell says: "we're gonna' be buzzing in '86!" to which B. Brian Blair adds: "and in '87!"

Looks like a syndicated left-over with Gorilla and "Mean" Gene on the call. No idea who the Menace is/was, but he has some blonde hair sticking out of his eye-holes. Gorilla mentions that Jones & Roma are "bound for destiny". Menae goes for a slam, but Roma takes him over and scores a quick 2 count. Roma whips him in for a hip-toss, works the arm and passes it off to Jones. Jones hooks a hammerlock on Haley, then passes it off to Roma. Drop toehold from Roma, then back to the hammerlock. Haley gets worked over, then flass victim to a double-team whip and power-slam as Roma makes the cover. Well that was... nothing.

Yes, this is happening. Heenan says that the words "Nick Kiniski" look like an eye-chart at the DMV. We jump to Madison Square Garden with Gorilla and Lord Alfred Hayes calling the "action". Gorilla compliments Kiniski on having the foresight to step OUT of the ring to remove his jacket! Your basic preliminary match, as Kiniski gets to shine with some nice hip-tosses and a drop-kick. Kiniski then loses all momentum by working an armbar. A little ring rope do-si-do, as Kiniski gets a slam, then right back to the armbar. Whip to the corner and Kiniski misses a twisting bodypress from the second rope. Lombardi takes over with dirty tactics and a clothesline for 2. Reverse chinlock happens. Lombardi bites Kiniski into the corner and the camera picks him up relaying a cue to Kiniski. Kiniski reverses an Irsh whip and Lomardi eats post. Backdrop, beal, drop-kick and a belly-to-back suplex gets the 3 count for Kiniski. The ending was fine, but getting there was wretched.

Heenan cracks up Gorilla by saying: "it'll take a good man to beat Lombardi... but it won't take him long". They discuss the Roddy Piper/Adrian Adonis/Bob Orton/Don Muraco feud to keep that simmering, as we go to...

No Mr. Fuji or any jokes, as Muraco's been acting more serious since the Piper's Pit attack. Muraco insinuates that Piper might be similar to Adonis as that they make "strange bedfellows".

Piper announces "the boss is back"! Hart quickly enters bearing gifts for Piper: a crutch, a lei from Muraco, pants from Mr. Fuji, then a pink cowboy hat and rope from Orton. Orton's message is that Piper can go hang himself. Piper takes it all in stride, then gives Hart his own present: he ties him up with the rope and dumps a bottle of mouthwash into "the Mouth".

Back in the studio, Heenan says he's calling the President of LJN to find out about his "doll". 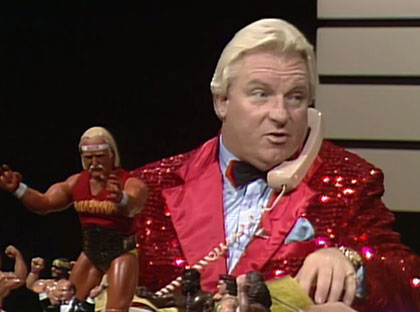 Probably a re-broadcast from the weekly syndicated shows. Orndorff's a condescending prick as he takes a group of regular folks through a workout routine at the gym. I kept waiting for something quotable, odd or humorous, but couldn't find anything. Just a segment to re-build Orndorff as a jerk...over roughly 10 minutes.

Wha? No "Feature Match"? This episode checks in on WWE Network at 73 minutes...so I'm curious if there was a weird edit, or if this was originally slated into a 90 minute timeslot. Gorilla wraps things up, as Heenan shows a picture of his figure, from the card back. Gorilla riles him up by saying the figure resembles the Honky Tonk Man. Wha?! Our first PTW Honky reference, I believe.

Why'd You Watch This?:
Not a good selection, this episode. The matches were forgettable. Only interesting thing was the simmering angles they kept referencing. The Piper angle was fine, but the Orndorff segment just droned on for way too long. So, yup, another skippable episode.