Hello everyone and welcome. Gorilla Monsoon is flying solo in the studio, as Bobby "The Brain" Heenan walked out at the end of our last episode. I'll be shocked if we go this entire episode without the Brain barging in. But with so much going on in the World Wrestling Federation, let's get down to ringside for...

From Boston Garden, with the dream team of Gorilla Monsoon and Jesse "The Body" Ventura on the sticks. From way back on January 11, 1986, so they're still building Funk for his title shots against Hulk Hogan. Funk feigns a boxing match, then suckers Morales in for some cheap shots. Funk is very animated and sells Morales' chops very well, slouching out through the bottom ropes. Funk gets pissed and simply chucks Morales over the top rope onto the announce table, then kicks his tushy all over the ring. Being a total jerk, Funk even swipes at Gorilla to get some boo-birds! Hart distracts the ref so Funk can unwrap his athletic tape and choke away. Morales fights back, gets the tape, and returns the favor. Out to ringside as they go all 1986 hardcore. Funk knocks over the wooden steps and tries to hide beneath them. Morales threatens to leap from the top turnbuckle, but I'll believe that when I see it. Funk goes beneath the ring and chucks a wooden chair into the ring, but the ref quickly kicks it aside. Funk gets caught in the ropes and, as the ref admonishes Morales, Hart slips in the megaphone. We get PIXELATION as Funk's trunks fall down. Morales walks right into the megaphone shot and gets mashed like yautia, then Funk covers for the 3 count. All Morales did was punch and slap, so this was all Funk acting out and carrying him to an entertaining match.

Back in the studio, the Brain arrives, wondering aloud how they could start the show without the host. Brain claims to have been on the phone with WWF President Jack Tunney (on hold, no less), regarding the "Big, Giant, Super Machines".

A syndicated show leftover, joined slightly-in-progress with B. Brain Blair and Thornton trading hammerlocks on the mat. Gorilla is solo in the booth and mentions that the Bees are "top 4 in tag team contention". So you're saying they're better than SD Jones and Paul Roma! Later on, some dated audio tells us that the current tag champs are Brutus Beefcake and Greg Valetine, so this match is a few months old. Bees do their little arm-wringer doubleteam, with Blair "buzzing" his arms and coming off the second rope. Heels get the basic sneaky bad guy offense and work on Blair for a few minutes. Lot of forearm shots and duels, which is apaprenty Thorton's specialty. Whip into a scoop slam as Blair gets a 2 count. Bees do their doubel-team finisher: whip and dropdown from Blair and "Jumpin'" Jim Brunzell hits Thorton with a drop-kick for the pin.

Vintage Macho Man as he presents Resnick with a bar of soap, since he's cleaning up wrestling, yeah! Macho throws a challenge out to Hulk Hogan. 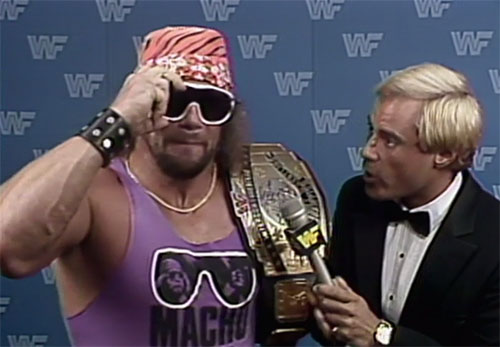 Velvet McIntyre vs. The Fabulous Moolah

More syndication stuff as Lord Alfred Hayes joins Gorilla in the booth. Non-title and they quickly go into a armdrag sequence. Moolah works over McIntyre with a step-over toehold and the always lethal HAIRPULL before flinging her to the floor. Moolah goes all 1986 hardcore and slams McIntyre on the floor. Well, it's padded, but whatever. Back in, McIntyre grazes Moolah with some crappy one-legged dropkicks, then two catapults. Then she picks Moolah up for the Giant Swing! Two flips and then Moolah reverses a roll-up and scores the pin.

Back in the studio, we see the Brain has "HOST" on the back of his jacket! As the show goes on, letters keep falling off.

Sharpe grabs the ring announcer's mic and hollers that he's "Canada's Greatest Athlete"! Non-title workout match for the Bulldogs. Almost immediately, the Dream Team and Johhny V come down to ringside to observe. Davey Boy Smith flings both guys around, then brings in Dynamite Kid for a double-clothesline on Carabello. Sharpe gets a few forearms shots, but eats uppercuts and a snap suplex. Smith backdrops Carabello and delivers his own suplex for 2. Big running powerslam on Carabello, then Smith picks up Sharpe for a fireman's carry. Tg to Dynamite, who hops up on Sharpe's back and hits Carabello with a flying headbut to score the pin. Afterwards, the Dream Team enters the ring for the obligatory "brawl back to the locker room".

Huh. I think this is the first time we've seen an "Update" segment. Okerlund recounts the Hogan/Orndorff issue and we get a pre-recorded promo from Hulk Hogan. "You sold out all the little Hulksters"! Okerlund closes it out by saying: "it'll be some time before the champion trusts someone again".

Don Muraco is supposed to be the guest, but doesn't show, as we get the surprise re-appearance of "Rowdy" Roddy Piper! Piper thanks Adonis for running things in his absence, but is here to take his show back. Adonis protests and brings out his new bodyguard, "Acey" Bob Orton (now in a pink cowboy hat). Orton tells Piper that it's just "dollars and cents, man". Piper's frustrated, pulls his hair, hollers and walks off. You know where this is going, but this actually starts off fairly ho-hum. Oh, back in the studio Gorilla tells us that Piper has just returned from an "extensive tour of the Middle East". You can tell this is a face turn, because Gorilla is suddenly siding with Piper.

I'm thankful that I've gotten this far into PTW and this is the first Bellomo appearance I've had to stomach. We're in the Meadowlands Arena in New Jersey for this one, with Gorilla and Howard Finkel on the call. Finkel is very well-spoken, yet seems to have a LOT to say. Bruti is still being announced from "Parts Unknown" as this match is from way back in 1984. We get a shot of Bellomo's parents in the front row, for what that's worth. Bruti stalls to work the crowd and easily slams ol' Sal, twice. Sal slams back and Bruti bails. Bruti struts around, but Sal drop-kicks him in the back, then forces him over the turnbuckles as if he's just won a two-man battle royal. Stompy/kicky from Bruti until Sal sweeps the legs and does a chest-splash to the groin. Err. They do three rounds of hitting the ropes, ducking under, until Bruti connects with a high knee and scores the pin. Very slow match with only two sequences that seemed to be in (lower) first gear. So, garbage all around.

They contend that they're under-rated and will be the next tag champs. Hart: "we've beat the Bulldogs, the Killer Bees and Spivey & Retardo"! Resnick asks Neidhart about his date with Moolah, but Neidhart just smiles and cackles. Sure, every team challenges the champs, but this might have been the first official shot in the 1986-1987 Bulldogs/Harts war.

Another syndicated re-run as Howard Finkel introduces the Moondog's NEW manager-- Jimmy Hart. Wha?! Never knew that Hart managed them! Match is a Moondogs beatdown, with the jobbers getting in some token offense, like a surprise sunset flip that goes nowhere. Spotty comes in for his usual shoulderbreaker and suplex for 2. Veilleux tries a high cross-body, but gets caught and double-teamed. Spot with a kneedrop from the second turnbuckle for 2, then he pulls him up. The Dogs allows a tag to Jodoin, so they beat on him. Powerslam from Rex, then the Moondogs hit their finisher for the pin (the Demolition Decapitation, but with a nice flying elbow from Spot). This was probably the final push for the Moondogs, as they've looked good over the past two months or so.

From Boston Garden, about a year earlier. Joined slightly-in-progress as fans are throwing drinks into the ring. Dog and Steamer are beating the tar out of Muraco and Fuji and the crowd is loving it. JYD goes into his rolling headbutt sequence, then flying chops from Steamer as Fuji and Muraco bump like crazy. Double-team clothesline and another flying chop on Muraco. Steambaot slithers around the mat, like a...dragon, I guess. Don't remember him doing that, too often. Greco Roman Nut Jab from Muraco turns the tide. Fuji comes in for his Kamikaze Groin Drop and chops away. Vintage Dirty Heel Work, as they distract the ref and choke with the tag rope. Steamer reverses a suplex attempt, then blows a splash as Fuji gets his knees up. They cut the ring off and try to make hamburger out of the Dragon. The Garden explodes as they make the hot tag to JYD! After some thumps, JYD and Muraco bump heads and both hit the canvas. Dragon returns with a flying chop, "karate" chops and an enseguri to send Muraco packing. Fuji comes in and Steamer pins him with the flying bodypress from the top. Crowd absolutely loved this, but about 65% was just Steamboat taking a beating.

One final studio segment as Gorilla teases Brain about what's written on the back of his jacket. Brain think it still says "HOST", but the only letter still attached is "O". "It says exactly what the world thinks of you, Brain".

Why'd You Watch This?:
This is just another day at the office. Like an ordinary Tuesday that you'll forget about by the end of the week. The matches were a weird selection, with several being plucked from well in the past. The only really interesting element is the Flower Shop, but if you'd been watching WWF TV at the time, you probably already saw that on the weekend. If you want to watch it, today, head over to YouTube and skip this episode of PTW.