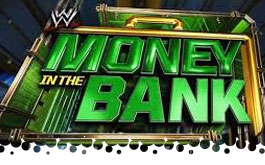 - Presented live on the WWE Network on June 18th from the Scottrade Center in St. Louis, MO. Tom Phillips, John "Bradshaw" Layfield, and Byron Saxton are at ringside to call the action, unless otherwise noted. In the Kickoff Match, The Hype Bros reunited in a victorious effort against Primo and Epico in your standard preliminary match. In a more timely manner, I'd normally cover the Kickoff Show match(es), but I'm pressed for time and I'm good with missing a Colons match.

Money in the Bank Ladder Match:
Charlotte Flair vs. Becky Lynch vs. Natalya vs. Tamina vs. Carmella (w/ James Ellsworth):

The 1st ever Women's Money in the Bank Match, truly a historic moment that will have an amazing conclusion. The match came to be when all the women began brawling before an elimination match to determine the new #1 contender, giving Shane McMahon the light-bulb thought-bubble to announce this match. Carmella and Ellsworth have dollar bills printed all over their outfits, and everyone else is mostly normally attired. Tamina got the shine early, cleaning house of everyone single handedly. Not a lot of big bumps, but there were a few ladder tipping spots that left participants hung up in the ropes. Charlotte did a corkscrew moonsault onto Tamina and Natalya on the floor after botching a spear through the ropes. Becky Powerbombed Carmella off the ladder and seemed to have the match won, but James Ellsworth, spoiler of ladder matches (see also: TLC 2016), tipped it over. Encouraging Carmella to regain her footing failed, so he climbed the ladder instead, unhooked the briefcase, and dropped it into Carmella's grasp for the tainted victory at 13:20, with the referees all arguing at ringside over what just happened. There are technically no rules, so who's to say a non-participant can't retrieve the briefcase for someone else? ***1/4 Not a spectacular train-wreck, but they were working hard, and kudos for the finish. Yes, I liked the finish, sue me.

- You could say the "Great Balls of Fire" commercial is out of touch with the era, but considering the average age of WWE fans, it's not far off.

(Jimmy & Jey Uso vs. Big E. & Kofi Kingston)
With how "instant" this was booked, you have to expect a bull-crap finish. Before the match, New Day make some juvenile jokes about dropping the soap in the prison and peanut butter and jelly only being used for making sandwiches. New Day controls early with frequent tags and double teaming. Jey pulled the ropes down on Kofi, causing him to take a bad spill to the floor, followed by a double team suplex into the post. Uso hit their modified Demolition Decapitation. Big E gets the hot tag and throws Jimmy with belly-to-belly suplexes, but runs into a super-kick. To the corner, and Jimmy runs into a uranage for a near fall. Back drop to the apron and Big E with the spear through the ropes. Thank goodness, he doesn't land on his head. Kofi misses Trouble in Paradise and gets the knee clipped. Jey with a jumping stomp to the back of the leg and the Tequila Sunrise. Big E counters a suicide dive with an overhead suplex. Jey intercepts Big E with a super-kick. Kofi counters another with a Dragon Sleeper, but Jimmy with a distraction. S.O.S. for a near fall. Big E with the blind tag and the Big Ending for a near fall. Jey with a roll-up and handful of tights for two. Kofi with a stage dive onto both Usos. They go for the Midnight Hour, but Jimmy pulls Jey to safety and they take the cheap Count-Out at 12:00. ***1/4 What an awful finish, but it was expected. Good match until the finish that 1987 wants back.

Have we traveled back to the mid 2000's for this match? We've got one of the worst workers on the female roster defending the title against someone who is clearly only being used for her looks, and it's one of those "thrown together at the last minute" situations. This match is going to be all about the entrances and nothing else. Lana gets as good of a babyface response, if not better than Naomi. Naomi attacks in the corner, disregarding the referee. Lana avoids a body press and covers for two. "We Want Rusev" chant. Have I mentioned how much I hate Naomi's slow-motion kicks? At least Lana caught and countered it. Snap suplex into the ropes. Naomi counters a leg lock with a cross arm breaker, but doesn't hold on for long, selling the leg. Naomi with her kicks and Rear View for two. NO-SELL THAT FINISHER, LANA! Sit-Out Spine-buster for two. NO-SELL THAT FINISHER, NAOMI! Carmella's music plays, teasing a cash-in, but she chooses not to, because that would be SMART. Naomi counters a second finisher and the "Luchador Submission" finishes at 7:30. *1/2 This went exactly as I thought it would be. Lana's offense looked OK, but her selling was a bit over-dramatic.

- Fashion Files, Miami Vice Style. Fandango has an old school cell-phone (property of Paul E.) and they're waiting on words from the boys in the lab, based on the sketch, of who attacked Breezy. Breeze freaks out over the sound of the fax machine. They have a VHS tape ("is it Coliseum?") and pop it into a not-quite 80's TV/VCR hybrid. The mysterious duo, doing their best Black Scorpion impressions, want to meet The Fashion Police in the ring... tonight. Breezango conclude it by spouting off Michael Jackson song titles as their conversation.

- Maria Kanellis and Mike Bennett make their surprise debut, with Mike having adopted her surname. She's allowed to remain the First Lady... of WWE. She's been searching for the perfect partner, and they're here to educate everyone on the Power of Love. Well, that's an upgrade from the early 60's with the "Great Balls of Fire" reference. Now we're in the 80's with Huey Lewis and the News.

Orton is in his hometown. He's doomed. There's a handful of legends at ringside (including his father, Greg Gagne, Larry Hennig, Baron von Rashke, Sgt. Slaughter, and Ric Flair), which might as well be a 6-foot tall target for the finish. Orton starts off the match at a fast clip, but fails to hit an RKO. He's basically the modern day babyface Jake Roberts, constantly teasing hi one big move. Mahal works the knee, but gets tossed into the front row, right in the lap of the legends (and Gagne). Mahal regains his composure and drops Orton knee-first onto the announcer's table. Back inside, Mahal grapevines the leg. Orton with a Fallaway slam to send Mahal out of the ring, but can't maintain control. Mahal counters an RKO and connects with a roundhouse kick for two. He keeps working the knee and even applies the Figure-Four. Orton counters a spinning toe hold with a small package for two. Orton with a Super-Plex, the move his dad "made famous", sayeth JBL. Orton hits an RKO, but the Singhs interfere, hoping to draw a DQ, but they get ejected from ringside. For two guys who were ejected, they're taking their sweet time leaving. They go after Bob Orton, bringing Randy to the floor for his monthly "trying to kill the Singh" spots. Unfortunately, no awesome gif this time. Back in the ring, and Mahal finishes with the KALLAS at 20:48 to retain. Well, that ending seemed familiar. *** Probably Mahal's best match ever, and they just recycled the finish from Backlash, just with Bob Orton inserted as a distraction device. Mahal is the 1st WWE Champion to successfully defend the title on "PPV" in 2017!

Breezango vs. The Ascension:

(Tyler Breeze & Fandango vs. Viktor & Konnor)
So the big reveal to who the mysterious attackers over the last few weeks turns out to be the bottom feeding Ascension. I don't know how I convinced myself it would be a heel-turn American Alpha, but that's what I get for expecting something other than the easiest, laziest, decision that could possibly be made. Breeze and Viktor start with Breeze unloading with rights. That's what happens when you attack the Fashion Police! Breeze quickly gets caught in the corner and pounded on. Konnor comes off the ropes with an elbow for two. Fandango with the blind tag. He lays into Konnor with chops. Whip reversed and he connects with a spinning heel kick. Fandango to the top, but Viktor runs interference. Konnor with a vicious spine-buster for a near fall. Breeze makes the save from a double team attack, allowing Fandango to cradle Viktor for three at 3:50. * Filler match.

Money in the Bank Ladder Match:
A.J. Styles vs. Shinsuke Nakamura vs. Sami Zayn vs. Kevin Owens vs. Baron Corbin vs. Dolph Ziggler:

Before the match can officially begin, Baron Corbin attacks Nakamura, temporarily taking him out of the match. What a surprise, Corbin's new shirt has a wolf on it. Everyone brawls at ringside while referees take Nakamura backstage for medical attention. Zayn takes out Owens with a somersault plancha. Corbin and Ziggler with a ladder clothesline to Styles. The alliance is short lived thanks to a Corbin sucker punch. Ziggler responds with a Super-Kick. Ziggler wipes out a Phenomenal Forearm, but gets wiped out with a Deep Six on the floor. KO climbs the ropes, only to get slammed onto an open ladder by Sami. He disposes of the broken ladder while the camera misses something good on the floor. Ziggler prevents a climb attempt by throwing Sami into a ladder in the corner. They take turns yanking each other off until Dolph hits a dropkick. Zayn catches a Super-Kick and hits the Blue Thunder Bomb. Styles chops Corbin down and hits a sliding forearm.

We finally get a serious climb attempt, with Ziggler taking Corbin down with the Zig-Zag. Zayn with an insane somersault power-bomb to take Ziggler off the ladder. Owens goes for the Pop-Up Powerbomb on the apron, but Sami avoids it and connects with a reverse exploder on the ring apron! Styles breaks up Sami's climb with the Phenomenal Forearm. KO returns from the dead to prevent Sami from getting the briefcase. Styles blocks a Powerbomb and drops Owens across a ladder with an Attitude Adjustment. Nakamura finally enters the match, just as Corbin seemed to be in position to win, and cleans house. Nakamura and Styles end up alone in the ring for the big confrontation. They trade forearms until Styles hits the Phenomenal Blitz. Nakamura grabs him with a rear choke and takes Styles over with the reverse Exploder. He loads up in the corner but the Kinshasa is countered with a diving forearm. Both climb and Corbin pushes the ladder over. Corbin is alone and retrieves the briefcase at 29:30. **** It's really hard to find bad ladder matches, and while I would've trimmed this down a bit, this had a good blend of solid sequences and high risk bumps to satisfy everyone's thirst for carnage.

Final Thoughts: What a polarizing experience. If you're looking strictly from match quality, most of the matches delivered, with the only underwhelming efforts being padding for the show. On the other hand, the poor finishes really brought things down, but not nearly to the point where I'd call this a bad show. I believe the finish to the Women's Ladder Match was fine, but hated the booking for all three Championship matches. This one gets the cheap "thumbs in the middle." If you can ignore the bad booking, give it a watch, if not, pass.