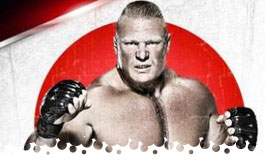 - Courtesy of the WWE Network, we’re LIVE on July 4th, 2015 from the Ryogoku Kokugikan in Tokyo, Japan, East Coast start-time of 5:30 a.m. The only stuff announced ahead of time is the NXT Championship Match featuring Kevin Owens defending against Finn Balor, and Brock Lesnar’s first in-ring action since WrestleMania (31). Who knows if we’ll get the whole card (probably not), but lets enjoy what we do get, and enjoy the fact that the WWE Network is giving us these kind of shows to change up the regular formula.

- Michael Cole and Byron Saxton are around to call the action, unless otherwise noted. I’d say “at ringside”, but that clearly is not the case. I’ll say it now before I get into the matches: Michael Cole can be pretty good sometimes, maybe he was allowed to cut loose, or maybe he didn’t have a certain person screaming into his ear instructions, but he was really good. Saxton, not so much. Some people have it, some people don’t. Saxton is just going to be another in a long-line of failed efforts.

- One final note: the advertised matches of Cesaro vs. Diego and the Lucha Dragon vs. New Day members Xavier Woods & Big E. were not featured on the broadcast. The latter of the two was referenced in taking place, but no word of the former.

Hell of a choice for the opener. I loved the fact we got references to Jericho’s “Lionheart” days, and Neville’s work in Dragon Gate throughout the match. Both men are playing baby-face, with Jericho making the occasional heel throwback like his arrogant flexing cover and just acting a bit obnoxious here and there. Fairly balanced start, with both men trading counters. Cool spot with Neville sweeping the leg into a cover, but when Jericho tries it, Neville back-flips away from him. Jericho ends up controlling the better part of the first 10-minutes, constantly countering or avoiding Neville’s high risk efforts, including countering a hurricanrana into the Walls of Jericho. Neville hit a twisting suicide dive for his first big offensive move of the match, then follows it up with a standing SSP for a near fall. Jericho came back with a Lionsault for two. Neville went for a springboard attack, but Jericho caught him in mid-air with the Code-Breaker for another near fall. Neville with another comeback attempt, laying out Jericho with a pair of Super-Kicks. He comes off the top with the Red Arrow, but it meets the knees, and Jericho quickly goes “screw this” and slaps on the old fashion Lion-Tamer for the tap out at 16:20. Only complaint I have in the commentary is exposing how Neville is always “so close” but doesn’t actually win big matches. I’m not saying he had to win here, but announcing how he’s been booked and having him lose a big match minutes later just exposes it a bit. ***1/2 Great opener, with non-stop action. Jericho played the crafty veteran who had a counter for everything, while Neville continued to show-case his plucky “never say die” attitude.

I’m pretty sure this was originally advertised as Naomi, but I actually prefer Tamina since it changes up the match formula to a significant degree. I’m not expecting much from this one, but considering their audience, I just hope it isn’t botch heavy and they don’t call too many spots out loud. Tamina dominates early with her rough-house offense, forcing Nikki and Paige to team up and take her out with a double suplex and Super-Kick combo. Paige with a running knee into the corner, followed by a flurry of knee strikes to the body. Tamina comes back to life for the traditional 3-way tower of doom spot to a big pop, but covers on both Paige and Nikki only get two counts. Nikki with the Alabama Slam on Paige for two. Paige recovers quickly and hits the Ram-Paige on Nikki for two. She applies the PTO, but Tamina is back in and knocks Paige’s head off with a Super-Kick. She plants Nikki with the Samoan Drop, but the Superfly Splash meets nothing but canvas. Nikki’s up, and she levels Tamina with a charging forearm… and it gets three at 7:07. I’m all for a big strike finish, and it changes things up, but damn did that come out of nowhere. **1/4 Not a great match, but they were working hard, everything looked solid except for a sloppy roll-up early on, and the crowd was surprisingly into it.

Brock’s opponent might as well be labeled as “Unfortunate Victim.” No Heyman with Lesnar, no New Day members with Kofi. I’ve set the over/under at 2-minutes, and officially set my prediction at under with 90-seconds. Lesnar is making his first in-ring appearance since being robbed of the WWE World Heavyweight Title at WrestleMania 31. The bell rings, and Kofi runs. He tries hitting Brock with kicks and dropkicks, but Lesnar shrugs it all off. He lands on his feet during a German Suplex attempt and goes after the “injured” knee, but that just pisses Brock off. He finally gets his hands on Kofi, drops him with a series of brutal Germans, and finishes it off with ease via the F-5 at 2:38. Damn, it was close at least. Post-match, Kofi eats another F-5, as does the attempted rescuers Xavier Woods and Big E. * Just a squash match, but it was fun while it lasted.

Main Event time! Balor is rocking the super-cool Demon body-paint and entrance, so you know this match is a big deal. He’s also riding a victory over Owens on the last episode of NXT, so momentum is on his side. Another kudos to the commentary team making reference to his “Prince Devitt” days and giving us a look into his background. We get streamers to make it an even bigger deal, but Owens doesn’t appreciate it and throws the flowers presented to him halfway down the aisle. Balor hits Owens at the bell with a running dropkick and follows him to the floor with a plancha. Owens grounds Balor often with his brute strength, but Balor resiliently battles back throwing dropkicks. He takes a beating on the floor, but rolls back in just in time to be crushed by a jumping back splash. Owens teases a big spot, but just grabs a chinlock and taunts the crowd for expecting he would do it for them. He goes through Cena’s 5-moves-of-doom, because he’s an arrogant jerk that everyone should love. Balor with another comeback, hitting Owens with a suicide senton, followed by a double stomp to the back. Elevated Death Drop gets two. Owens with a German Suplex and the Otto Wanz body roll into the corner for two. Cradle Slam gets two. Balor with the Coup de Grace for two! Owens with a Rolling Senton from the second turnbuckle for two. Underhook brain-buster gets two. Sleeper Suplex for two. Balor escapes the Pop-Up Powerbomb, knocks Owens silly with a running basement dropkick, and a second Coup de Grace finishes at 19:29, giving Finn Balor the NXT Title! Post-Match, he offers a handshake, but Owens just walks away. Tatsumi Fujinami comes out and raises Balor’s hand in victory to make up for it. ****1/2 Another excellent performance from Kevin Owens, and obviously Finn Balor is going to be a major player in the near future with not only his strong in-ring abilities, but for the “Sports Entertainment” entrance of his demon persona. A perfect ending to a WWE Network Special…

- …Wait, there’s another match, and its being called tonight’s “Main Event”? Um… OK.

There’s a random tag team match straight out of the Saturday Night’s Main Event era. None of these four men have anything to do with each other. Cena is feuding with Owens, Ziggler with Rusev, Kane is the Authority lackey, and Barrett is programmed with R-FUCKING-TRUTH, a man carrying a plunger around as a scepter. Ziggler is wearing three layers of vests for God knows what reason. Ziggler and Barrett go at it for a few minutes. Then we get Cena vs. Kane as Cole laughable reminds us of their “historic” matches. Historically bad, so I guess he was half-right. Cena quickly becomes the face-in-peril as Kane and Barrett take turns grabbing rest-holds. Kane at least gets to work in his signature flying clothesline and side slam. Ziggler gets the hot tag and hits Barrett with a neck breaker and jumping elbow drop for two. He quickly is over-come by the powers of England and Hellfire, and now he spends 8-minutes getting his clock cleaned. A Fame-Asser attempt is countered with a Power-Bomb, and Barrett’s Winds of Change gets two. Cena gets the REAL hot tag and cleans house on both Kane and Barrett. He goes through his 5-moves of doom, and the crowd is actually cheering it for once. AA to Kane, AA to Barrett, and the three count is academic for Cena Wins, LOL at 23:49. Yeah, THAT much time for a cookie cutter throw-away tag team match. I guess they had to go long to fill the run time, but still… *1/2 Just too long with too much resting in between the spots that were actually entertaining.

Final Thoughts: We ended the morning on a low-note, possibly because they had to follow an outstanding performance between Owens and Balor for the NXT Title. The show as a whole, at least until the 90-minute mark, shows that the WWE can offer a wide variety of entertainment on one card without feeling stale. Jericho out-wrestling Neville and Neville doing everything in his abilities to mount comeback after comeback, the Divas working hard, Brock Lesnar destroying each other, and an excellent, hard-hitting Heavyweight clash for the NXT Title. Then we got WWE’s “Sports Entertainment” paint-by-numbers match. With two great matches and a fun undercard (for the most part), this one is an easy Recommendation to give a look, courtesy the WWE Network (for only $9.99, unless you register new email addresses every month for the free subscription).