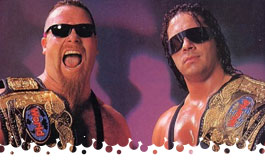 - "Mean" Gene Okerlund and Lord Alfred Hayes (wearing matching canary yellow blazers and baby blue trousers) are our hosts from the WWF Control Studio. We’re offered a quick preview of what to expect this hour: The British Bulldogs defend the Tag Team Titles against The Hart Foundation, Jake "The Snake" Roberts will be in action, as well as "a host of others."

Recycled from the January 31st episode of Superstars and taped from the Meadowlands Arena on January 5th. The Rougeaus debuted shortly after WrestleMania 2 but weren’t doing much other than filling out the card. McMahon calls Jacques and Raymond the best brother duo in wrestling. Navarro with a knee to the midsection of Jacques. Crisscross and Jacques takes him over with a monkey flip. Dino Bravo (with dark hair and wearing a bunch of ring gear with the Canadian flag on it) wanders to ringside. Chung Lee tags in and gets tossed to the floor. Raymond brings him in with a sling-shot and comes off the ropes with a sunset flip for two. Whip to the ropes and Jacques with the diving elbow for two. Whip and Raymond with a Super-Kick for two. Chung Lee sends Raymond to the ropes and connects with a chop. Navarro tries his luck but gets caught in a sleeper. Bravo has joined the French announce team (this existed in 1987?!) as the Rougeaus clear Chung Lee from the ring with a double dropkick and finish Navarro with the Rougeau Bomb at 3:01 (flying seated splash). The Rougeaus had little personality as babyfaces but were good mechanics, putting on an entertaining enhancement match. The stuff with Dino Bravo would continue through WrestleMania, with the Rougeaus working tons of shows with Bravo and Valentine, the "New" Dream Team.

- WrestleMania III Special Bulletin! Craig DeGeorge is standing by with WWF President Jack Tunney for the announcement of where this year’s WrestleMania will be held. Places like Wembley Stadium, the Maple Leaf Gardens, and Madison Square Garden were all interested destinations, but after careful consideration, the decision was made to hold the event at the Silverdome in Detroit, MI. Tunney calls Mania III "the biggest wrestling even in the history of wrestling." In 2018, this would be a WWE YouTube exclusive or "broken by NBC Sports" after 3 months of being reported in the Wrestling Observer Newsletter.

Recycled from the February 7th episode of Superstars, taped on January 26th from the Sundome in Tampa, FL. Ring entrances are cut because Davey Boy Smith LITERALLY CARRIED Dynamite Kid to the ring, due to suffering from a serious back injury. These days, Smith would’ve done the match solo with a backstage attack being the excuse for the handicap, or a straight-up stripping of the titles. Davey Boy chases the Foundation with Matilda while Jimmy Hart nails Dynamite with the megaphone, knocking him out on the floor. Smith with a clothesline to Bret and a scoop slam on the Anvil. He takes Bret over with a delayed suplex and tosses Neidhart out of the ring as we get a replay. Back to the live action, it’s still 2-on-1 while referee Danny Davis looks over Dynamite on the floor. Smith somehow remains in control despite being short a partner. Bret takes the chest-first bump into the corner and Smith whips Neidhart into him. Smith with a dropkick, knocking Bret out of the ring. He scoops up Neidhart and plants him with a Power-Slam, but Davis conveniently exits the ring to admonish the barely conscious Dynamite Kid. Smith pulls Davis back to the apron by the hair, opening the door for the Hart Foundation to finally take control. Whip to the ropes and they connect with a double elbow, followed by a double DDT. Bret with the Hart Attack and Neidhart covers for three at 2:57 to become the NEW WWF Tag Team Champions. Non-stop action, but more importantly, the final straw in the "Danny Davis is a corrupt referee" angle as he willingly let the Hart Foundation double-team Davey Boy Smith for the entire match and ignored Smith’s attempts at attaining victory.

- "Mean" Gene Okerlund is standing by for comments from "Rowdy" Roddy Piper concerning a card in Peoria, IL on March 2nd, where he teams with the Junkyard Dog to take on the King, Harley Race, and "Adorable" Adrian Adonis.

Recycled from the January 19th card held at Madison Square Garden and featured on the February 2nd episode of Prime-Time Wrestling. Bass’ MSG debut, for those that care about that sort of thing. Gorilla Monsoon and Gene Okerlund calling the action. Bass attacks before the bell, RIGHT IN FRONT OF THE REFEREE, much to the disgust of Monsoon and Gene. Whip and Bass takes Jones down with a choke-hold. Bass with an elbow drop that Jones can’t even bother to lay down for more than a 1-count for. Jones comes back with a headbutt and body blows. Whip and a "flying" elbow sending Bass out of the ring. Jones might’ve taken one foot off the ground for a fraction of a second. Bass begs for mercy in the corner and offers a handshake. He telegraphs a cheap-shot by a few years and Jones sends him to the corner with an atomic drop. Jones with a snap mare and rolling neck snap. Whip and a diving body press for two. Jones slows things down with a side headlock. Whip to the ropes and Bass with a knee to the midsection. They trade blows, with Jones getting the better of the exchange. Bass comes off the ropes with a clothesline and finishes with the prototype of the Pedigree at 6:57. Hard to foresee a bright future in the WWF for Bass when he’s barely able to defeat S.D. Jones. Bad match.

- "Mean" Gene Okerlund is back to hype that Peoria, IL card on March 2nd, this time joined by Kamala, The Wizard and Kim-Chee to hype a match against Jake "The Snake" Roberts.

Recycled from the February 1st episode of Wrestling Challenge, taped on January 6th from Hershey, PA. Roberts works the match with a t-shirt on for whatever reason. Lockup and Starr with an arm drag. Roberts with a knee to the midsection, boots, and the DDT for three at 0:28. In the few seconds the match lasted, Monsoon and Bobby Heenan discussed certain events that have taken place recently on Piper’s Pit.

- Piper’s Pit with Jesse "The Body" Ventura. He rips the microphone from Piper to let him know the man he promised to deliver is here and wants to know if Piper can deliver the same. Piper introduces Hulk Hogan, and Jesse Ventura not only brings out Andre the Giant, but HIS NEW MANAGER, BOBBY "THE BRAIN" HEENAN. Hogan wants answers, but Andre won’t answer him. Hogan gives Andre credit for making him the Champion he is today. Heenan interrupts to let him know that Andre is sick of everything Hogan stands for and accuses Hogan of ducking Andre as a potential challenger to his Championship. Andre puts Hogan in his place to official declare his intention of challenging Hogan for a Title Match at WrestleMania, and to show he means business, rips the shirt and cross off Hogan’s chest, drawing blood in the process.

Koko B. Ware vs. The Magnificent Muraco:

From the January 11th card held at Toronto’s Maple Leaf Gardens. Gorilla Monsoon and Johnny Valiant calling the action. Joined in Progress, with Koko spread Eagle on the canvas. Muraco drops the thumb across the throat and rolls over with a neck snap. Muraco keeps things in low gear, slapping on a nerve hold. This lasts seemingly forever, forcing me to scroll Twitter for entertainment. Koko escapes with fists to the midsection but Muraco quickly lays him out with a clothesline. Muraco to the top rope, taking Koko down with a knee across the chest. Muraco with another thumb to the throat. Koko’s second comeback ends the same as the first did. Muraco goes high risk again, but this time Koko slams him down. Koko unloads with rights and lefts in the corner and traps him in the tree of woe for more punishment. Koko with a suplex and missile dropkick, but Muraco is in the ropes to break the pin attempt. Koko casually applies a Boston Crab. He lays Muraco out with a headbutt for a two-count. They trade blows as the match continues to die and FINALLY the bell rings at 11:00 (shown) for the 20-minute time limit draw.

- Gene Okerlund is standing by one more time to get promos from Adrian Adonis and Jake Roberts for their respective matches in Peoria, IL on March 2nd.

Final Thoughts: Two important (and memorable) segments from the latest episode of Superstars highlights a throwaway show with two "exclusives" that were best left on the cutting room floor. If you’ve never seen either, the Hart Foundation title switch and Piper’s Pit segment with Andre the Giant’s heel turn are well worth checking out.