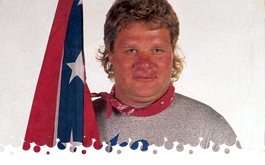 Hosted by Vince McMahon and Bruno Sammartino, taped on July 15th, 1986, from the Mid-Hudson Civic Center in Poughkeepsie, NY. Yes, they taped before the last episode of the previous cycle made it to broadcast! This week... Newcomers to Championship Wrestling: The Rougeau Brothers! Newcomer to the WWF: THE REBEL Dick Slater! The Flower Shop with Mr. Wonderful Paul Orndorff!!

Good to see Albano showing up with the Bulldogs. Feels like his presence has been hit-and-miss lately. Davey Boy starts. Chung Lee grabs a side headlock and comes off the ropes with a shoulder block. Davey Boy with a mule kick and arm drag into the arm bar. Crisscross and Davey with a dropkick, sending Chung Lee through the ropes. Back inside, Davey Boy with another arm drag. Chung Lee takes advantage of Davey Boy taking a shot at Petruzzi on the apron. Petruzzi with a hip toss into a cover for two. He plants Davey Boy with a slam as Sammartino accuses Orndorff of being of jealous of Hulk Hogan. Dynamite gets the tag and connects with his signature clothesline and snap suplex. Dynamite with a back breaker, Davey Boy with a running powerslam, and the flying headbutt finishes at 2:38. Fine action. I wouldn't mind the Bulldogs having a meaningful feud to give the belts more showcase than "hey, these guys are the champs. Watch them squash a couple of geeks" whenever they appear.

Ken Resnick is standing by with the Update, courtesy of the WWF Magazine. He welcomes WWF President Jack Tunney for a clarification on the suspension of Andre the Giant. He says it was one of the worst things he ever did as President, but Andre no-showed contracted appearances and the hearing, leaving him no choice. Bobby Heenan interrupts, congratulating Tunney on his decision, but now there's some guy named the Giant Machine. Everyone knows that's Andre the Giant. Tunny says they are Japanese with Japanese passports and says it might be Giant Baba. Heenan says show him one that is 7'5", then says 30 of "them" together aren't 7'5".

Muraco gives a big yawn during the introductions. I'm sure Vince LOVES when this guy does this stuff. Muraco grabs a waist-lock and hits Mancini with a belly-to-belly suplex. The Fink cuts in to hype an upcoming show in Lowell, MA. WHEN ARE WE GETTING UPDATES ON THE KING OF THE RING?! We get a pre-tape from Lanny Poffo, to remind home viewers that Muraco is a heel. Poffo's poem suggests Muraco has a gut he's trying to hide. Muraco dumps Mancini out of the ring, giving Fuji a chance to whack the goober with the cane. Muraco follows, dropping Mancini across the top rope, and taunts the crowd by pretending to be bored. Muraco with a powerslam, pulling Mancini up at two. The reverse Piledriver finishes at 3:03. Muraco has no feud of note, so lots of vague dialogue to promote him without something of substance.

Ken Resnick is standing by to hype the card in the Boston Garden on August 9th. Something about Resnick's body language bothers me. He keeps switching hands with the microphone and clearly can't stop reading the prompt cards. We get words from Jake Roberts (facing Ricky Steamboat).

"The Rebel" Dick Slater vs. The Gladiator:

Yes, Vince McMahon wrapped a man in the confederate flag, IN NEW YORK, AND PUSHED HIM AS A BABYFACE. Sammartino calls him an unusual character. The crowd does not respond favorably. Lockup into the ropes and Slater gives a clean break. GEEK. Gladiator counters a hammerlock with a drop toe hold. Slater grabs a side headlock but is caught in the ropes with a forearm to the midsection. Slater throws strikes in the corner, and it almost sounds like Vince is more impressed with the jobber. Whip to the corner, Gladiator takes the chest-first bump into the turnbuckle. Slater comes off the top with an elbow and hits a Russian leg sweep for three at 2:14. The crowd boos the babyface confederate flag waving rebel. Good for them.

Ken Resnick with more hype for the Boston Garden on August 9th. We get words from Nikolai Volkoff and the Iron Sheik, due to face the Hart Foundation for a shot at the Tag Team Titles.

The Rougeau Brothers vs. The Moondogs:

Jacques and Raymond made their earliest appearances shortly after WrestleMania 2, but this is their debut on Championship Wrestling. The match is joined in progress, for whatever reason. Jacques hits Rex with behind with a dropkick and comes off the ropes with a splash. Spot runs in and is greeted by a double dropkick. Why are the Rougeau's wearing mismatched gear? COLOR COORDINATION, PEOPLE! Spot gets a cheap shot from the apron, putting Raymond on the defensive. Whip to the ropes and Raymond surprises Rex with a sunset flip for two. Rex hooks the ankle, keeping Raymond in the corner. Spot with a snap mare and chin-lock. Raymond fights out of the corner and hits Spot with a cross body press. Jacques runs wild, hitting both Moondogs with dropkicks. Heck breaks loose with all four men in the ring. Rex accidentally whips Jacques into Spot, with Jacques hitting a cross body press for a quick three-count at 3:30. Solid action.

Adrian Adonis is standing by with the Flower Shop. This week is a VERY SPECIAL GUEST, Mr. Wonderful himself, Paul Orndorff. Adonis is wearing a blonde wig to go with his ensemble. Orndorff still looks frustrated. He introduces us to his new manager, Bobby Heenan, as if what happened last week wasn't enough of a clue. Heenan says Mr. Wonderful is the next Heavyweight Champion of the World. Orndorff says the fans are like Hulk Hogan. THEY DON'T LISTEN. Wow, what a promo.

Roberts is still working around the loop with Ricky Steamboat, so there's a chance we get some interaction between them. Roberts decks Tatri with a right hand and plants him with a series of deep slams. "Steamboat" chant as Roberts connects with a running knee lift. Whip to the ropes and Roberts with a clothesline. A decent section of fans chant "DDT" as the dominance continues. Tatri reverses a whip to the corner, but Roberts pops out immediately with a clothesline. DDT finishes at 1:51. Roberts unleashes Damian on Tatri to add insult to injury.

Ken Resnick is standing by with Capt. Lou Albano and the Super and Giant Machine. Resnick passes along Heenan's accusations. Giant Machine denies being Andre the Giant. He's Giant Machine. That should shut everyone up.

What a star-studded lineup filling out the enhancement team. Hall of Fame worthy jobbers, if you ask me. Afi comes out with the torch and Steamboat has his giant reptile. Even with his fancy twirling and dancing, I don't think Sivi Afi is getting over with this New York crowd. In fairness, a small section does cheer for him, but it isn't much. BREAKING NEWS! NEXT WEEK: WE WILL HEAR FROM HULK HOGAN. Steamboat and Lombardi start. Lombardi with a side headlock and hip toss. Steamboat comes back with a delayed slam. Afi with a pair of hip throws and a slam on Mr. X. Tonga avoids Brooks and scoops him up for a slam. Fred Blassie has joined commentary as Steamboat comes off the top with a chop. Blassie says he's in the process of selling ONE HALF OF THE CONTRACTS OF NIKOLAI VOLKOFF AND THE IRON SHEIK. Steamboat gets caught in the corner, giving the jobber trio a little shine. Whip and Brooks with a meaty right hand. Steamboat fights out of the corner and tags in Afi to ZERO reaction. That's amazing, considering they just had Steamboat in there. Tonga connects with a dropkick and Steamboat finishes Brooks with a flying body press at 3:29. Fun to see a bunch of bodies out there.

Ken Resnick with one more shill for the Boston Garden. We get words from Hulk Hogan, due to team with George "The Animal" Steele against Randy Savage and Adorable Adrian Adonis.

Final Thoughts: Considering this was the first week of a new taping cycle, it wasn't much to speak of. Yes, we confirmed Orndorff's heel turn and relationship with Bobby Heenan, but that was obvious. Fresh faces included the Rougeau Brothers and Dick Slater, and it was a 50/50 ratio of getting over with the New York audience. Low-key one of the biggest highlights, done in post-production, was Blassie's announcement, which was the first step towards him retiring from his managerial duties.