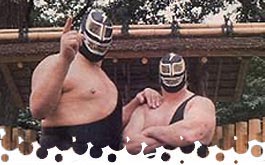 Hosted by Vince McMahon and Bruno Sammartino, taped on June 24th, 1986, from the Mid-Hudson Civic Center in Poughkeepsie, NY. Last week, Paul Orndorff desperately tried reaching Hulk Hogan via telephone to secure a tag team match with the Heenan Family members Big John Studd and King Kong Bundy, but Hogan was too busy working out, so the match isn't happening (yet). This week... Hogan and Orndorff will be on Adrian Adonis' Flower Shop and Gene Okerlund with a Special Report from Japan on a new tag team he's discovered!

Why do I feel like I've seen this match before? Vince notes they are indeed "grabbing them cakes." That's sexual harassment, pal! JYD and Lombardi start. Lockup to the ropes and Lombardi lands a forearm to the gut. Whip is reversed and JYD doesn't budge on a shoulder block. He takes Lombardi over with a hip toss and back body-drop. JYD with a big slam and his signature headbutts, sending Lombardi to the floor. Carabello tags in and must contend with the Animal. Steele throws him over the top rope. Three times. Steele tears apart a turnbuckle and rubs the stuffing in Carabello's eyes. Steele with a slam and the Dog back in to hit the THUMP Powerslam for three at 3:33. Harmless match. Probably better than enduring them in separate solo outings. Vince again tells us to "grab them cakes." I'm sorry, but I have a clean record. I'm not letting 1986 Vince McMahon peer pressure me into getting canceled.

"Mean" Gene Okerlund standing by with "Update". Page 22 of the latest edition of WWF Magazine has extensive coverage on Randy Savage and Elizabeth. Okerlund openly calls him a former-Major League Baseball Player. I'll save you a google search: Randy Savage spent a few years in the Single-A organizations of clubs like the Cardinals and Reds, but never played for their Major League franchises.

What the heck is Bob Orton doing with the Funk's?! I love oddity matches like this. Hoss (a.k.a. Dory) starts by working over Jones. He grabs a side headlock and comes off the ropes with a shoulder block. Crisscross and Jones with a hip toss, followed by a slam. Jimmy Jack gets a slam as well, and Orton thinks better of trying Jones out. Mancini grabs a headlock and Hoss takes him down with a back suplex. Orton tags in, taking Mancini overhead with a slam. Jimmy Jack clotheslines Mancini across the top rope and brings him back to his corner with a snap mare. Hoss dumps Mancini through the ropes, where Jimmy Jack gives him a taste of the security rail. Back inside, Driggers tags in as the crowd chants "JYD". I'm pretty sure that feud is dead. Jimmy Jack connects with a powerslam and Driggers is done at 2:35. Post-match, the Funk's hogtie Driggers and drag him around the ring while Orton keeps Mancini and Jones out of the ring. Another perfectly fine tag team squash.

Ken Resnick is standing by to hype the WWF coming to Foxboro on July 14th. There'll be a Tag Team Title defense, but also the 2nd Annual King of the Ring Tournament. ALSO, BRUNO SAMMARTINO IS IN ACTION, facing the "Designated Hitman" of local TV and Radio personality, Eddie Andelmann. I have no clue who that is, and I'm too lazy to hit the google machine.

Good to see the fresh face of Billy Jack immediately after seeing Jimmy Jack. Lockup into the corner and Haynes has no reservations throwing a knee. Brooks bails out, rightfully complaining about the poor sportsmanship of Haynes. Back inside, Brooks goes to the eyes and throws forearms. Vince McMahon throws it to comments from the Magnificent Muraco, who isn't a fan of Billy Jack. I smell a house show loop program! Whip to the ropes and Haynes with a boot to the "rotund physique" of Brooks. Haynes picks Brooks up and plants him with a spine-buster. Full Nelson finishes at 3:13. SPOILERS: Haynes never worked with Muraco around this time, so I guess the promo was to put it in the minds of fans that Haynes is the babyface by having a heel bagging on him.

Ken Resnick has the trophy by his side as he hypes Foxboro on July 14th. The Magnificent Muraco is standing by for comments about having to face Roddy Piper. He calls it a conspiracy, and says they'll set their friendship aside and concentrate on the moment. It's easy to forget in the timeline that Piper left a heel, and this was a rare appearance advertised during his sabbatical.

What a boring name. ERIC COOPER. Roberts is in the middle of his hot program with Ricky Steamboat. Lockup and Roberts snaps him over with an arm drag. Cooper surprises Roberts with a slam, sending him slithering into the corner. "Steamboat" chants get under Roberts' skin. Lockup into the corner and Roberts unloads with a series of elbows. He takes Cooper out of the corner with a snap mare and connects with a stomach buster. Lanny Poffo is standing by with a poem that buries Roberts for being a piece of crap. Roberts continues to punish Mr. Cooper. He taunts Cooper with a slaps and plants him with a slam. Whip to the ropes and Cooper counters a back body-drop. He throws forearms but Roberts pops out of the corner with a clothesline. Roberts finishes with the DDT at 3:07. Entertaining squash. Roberts was one of the more enjoyable acts at this point, a heel that didn't rely on the crowd's xenophobia or regional bias to draw heat.

Adrian Adonis is standing by from the Flower Shop. As advertised, the guests this week are the best friends forever, Hulk Hogan and "Mr. Wonderful" Paul Orndorff. Adonis taunts Hogan by clucking. "I thought one of the requirements of being World Champion was being able to answer a phone call." Hogan wants to accept the challenge, but Orndorff cuts him off. They'll face Studd and Bundy in two weeks, but first, he's accepted a challenge from the Moondogs, and that match will happen NEXT WEEK. Orndorff wants to show Adonis and the rest of the world what they can do as a team. He also wants to show everyone what Mr. Wonderful is all about.

Bobby Heenan is standing by to gloat about Andre the Giant being suspended from professional wrestling. We throw it to footage of Gene Okerlund "on assignment" in Japan. He's found "The Giant" Machine and "The Super" Machine. From "Sapporo, Japan." Super Machine speaks perfect English. Wakamatsu-San has told them that to be the best in the world, you must go to the United States. In order to be #1 in the World, they must fight in the WWF. ICHIBAN. They've negotiated a deal with Capt. Lou Albano to handle their business in the WWF. Giant Machine speaks up, and that accent seems very familiar, but I can't put my finger on it. Okerlund says he has the impression he's met the Giant Machine before. Back in Poughkeepsie, Bobby Heenan blows a gasket, accusing the Giant Machine of being Andre the Giant.

YAY, everyone's favorite future loud referee is in action! Woah, THE KILLER BEES HAVE MUSIC! A quick search suggests at one point they used Loverboy's "The Kid is Hot Tonite". I honestly had no memory of that. Brunzell starts with Kruger. Vince calls the Bees a model example of what personifies teamwork. Brunzell counters a waist-lock by picking the ankle and going to town with a spinning toe hold. Brunzell with an arm drag into an arm bar. Vince is in love with calling people perpetual motion. Crisscross and Brunzell with a hip toss and back to the arm bar. Kirby tags in and falls victim to the same misfortune. Blair tags in to pick up where his partner left off. Kirby forces a break but is taken out of the corner with a monkey flip. The Bees take turns working the arm. Blair does some buzzing before coming off the middle rope with an elbow. Vince spends a lot of the match talking about everything else, so you can see how little the Bees meant to him. Whip and the Bees with a double elbow smash for two. Blair finds himself in the wrong side of town. Kruger throws a dropkick and tags back out. Kirby quickly gives up the advantage. Blair takes a weird bump through the ropes and Kirby tries desperately to keep him from betting back in the ring. The Bees put on the masks, because cheating babyfaces is such a great concept. Not-Blair runs wild with forearms. Whip and the Bees with a pair of back body-drops. Not-Brunzell with an atomic drop and Not-Blair finishes Kirby with a dropkick at 5:15. The masked men who cheated to beat scrubs are our heroes. HIT THE MUSIC!

Ken Resnick with one more appearance to hype Foxboro on July 14th. The British Bulldogs defend the Tag Team Titles against Johnny Valiant's Dream Team in a Steel Cage Match! The 2nd Annual King of the Ring Tournament with the following draws: Mike Rotundo and Hercules with byes, Pedro Morales vs. Bob Orton, Dan Spivey vs. Nikolai Volkoff, JYD vs Mr. Wonderful, Billy Jack Haynes vs. The Iron Sheik, George "the Animal" Steele vs. Harley Race, and Roddy Piper vs. The Magnificent Muraco. CARD SUBJECT TO CHANGE.

NEXT WEEK: Hulk Hogan and Paul Orndorff vs. The Moondogs! More on Super and Giant Machine! Bruno Sammartino suggests it might be "Giant Baba." Yeah, and I'm the Haiti Kid.

Final Thoughts: We've got two major pieces of business in the works. The Orndorff/Hogan relationship seems to be A-OK as Orndorff has signed a tune-up match for the duo before stepping in the ring with Bundy and Studd, and we've got the first appearance of the mysterious Super and Giant Machine. No debuts for the live audience, and no new angles set in motion yet, so for a first week of taping for the live crowd, they could've done a little more from that perspective.