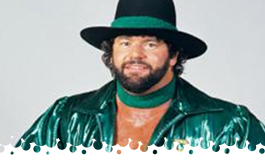 Hosted by Vince McMahon and Bruno Sammartino, taped on June 3rd from the Mid-Hudson Civic Center in Poughkeepsie, NY. This week we're opening things up with the exciting team of the Killer Bees! We'll also see the newcomer from the Pacific Northwest, Billy Jack Haynes! All this and MORE, so let's get to ringside for some tag team action...

Blair and Brunzell come to the ring already wearing their goofy masks. BABYFACES THAT CHEAT is legit the only thing they have going for them as far as character direction. The bell rings and they REMOVE the masks. I'm going to smash my head into a wall sooner than later with this kind of nonsense. Brunzell starts with Lombardi. The Fink cuts in to promote the upcoming show at a High School in New Hampshire. Brunzell works the arm and takes Lombardi over with a hip toss after a series of counters. Blair in, buzzing off the middle rope with an elbow across the arm. We get comments from Volkoff and Sheik calling the Bees "typical American cheaters." They aren't wrong. Gibbs tags in to try his luck. Whip to the ropes and Blair traps him with a drop toe hold. Crisscross and Blair with a cross body press for two. Brunzell with a snap mare into a chin-lock, but Gibbs counters. Lombardi can't hold the advantage and gets nailed with a running high knee. Brunzell plants him with a slam and back body-drop. Atomic drop and diving clothesline combo finishes at 3:27. I'm sad they didn't make that high knee Brunzell's finisher and call it something lame like "The Bee's Knee."

"Mean" Gene Okerlund is standing by with UPDATE. Jimmy Hart is featured in this month's issue of WWF Magazine, with Okerlund reading from the article on him before throwing it to highlights of Hart in the ring, like when JYD pulled his pants off on Saturday Night's Main Event almost HALF A YEAR AGO. Jimmy Hart interrupts and Okerlund presents him a pair of red underpants.

This is quite the unusual tandem. Hercules was still managed by Fred Blassie, who is conspicuous by his absence, and Orton is doing his own thing with Piper off filming "Body Slam." Hercules starts with Monti, who is introduced from San Francisco. At first, I thought it was a rib, but sure enough, he worked the territory and unfortunately passed away in 1999. Hercules doesn't waste time working him over. Orton with a high angle powerslam. Hercules tags back in, driving a series of knees into the back of the head and dropping him across the top rope. Park is allowed to tag in, and Orton greets him with boots. Whip and the unlikely duo nail Park with a double clothesline. Whip and Orton with a dropkick. He takes Park over with a back body-drop and drops a knee across the chest. Orton with a press slam into a back breaker and Hercules finishes with the Back Breaker at 2:54. Meanwhile, we have Bobby Heenan standing by with comments on Andre the Giant's indefinite suspension. He's not sweating Albano's threats taking things to a higher court. Heenan promises we'll never see Andre the Giant. EVER. AGAIN.

Ken Resnick is standing by to promote the upcoming card at the Boston Garden. Tony Atlas vs Harley Race! Junkyard Dog vs. King Kong Bundy! Ricky Steamboat vs. Jake Roberts! Mr. Wonderful vs. The Magnificent Muraco! IN THE MAIN EVENT, Hulk Hogan defends the WWF Championship against the Macho Man, Randy Savage! Hulk Hogan cuts a promo about "being turned off" by how Savage mistreats Elizabeth.

This is the debut (or return) of Haynes with zero hype on the way in. I guess they didn't care for how his last tenure turned out (does anyone even remember it?). Kent looks like such a goober. The graphic misspells his name as "Hanes" like the underwear. If you didn't know he's from the Pacific Northwest, he has "Oregon" on his jacket and trunks. Lockup and Haynes shoves Kent across the ring. Kent grabs a top wristlock, but Haynes easily throws him off. Haynes with forearms and a stomp across the back, followed by a delayed vertical suplex. He comes off the ropes with a leg drop and tosses Kent with a press slam. Kent's feeble offense has zero effect. Haynes smacks the ears and throws him with a gut-wrench suplex. Haynes continues the punishment with a back breaker and elbow drop. Kent runs into a brick wall trying a shoulder tackle. Haynes with another back breaker and he finally finishes this geek with the Full Nelson at 3:00. Haynes is presented as a babyface, but his offense and small touches suggest otherwise.

Killer Ken Resnick with more hype for Boston, this time with the Magnificent Muraco.

The match is joined with the Funk Brothers on the attack, hitting Wells with a double slam. They haven't even removed their gear! The bell rings and Hoss sends Wells into the corner, where he unloads with a series of right forearms. Whip is reversed and Wells with a shoulder tackle, followed by a pair of dropkicks to both members of the Funk Family. Back inside, Hoss with more blows in the corner. Wells turns things around again, unloading with right hands. Hoss avoids another attempt at a shoulder tackle, sending Wells to the corner. Meanwhile, The Fink hypes something called the KING OF THE RING TOURNAMENT in Foxborough. Diamond tags in and is immediately downed. Jimmy Jack with a pair of fist drops as we get an inset promo from Mike Rotundo and Dan Spivey looking to get through the Funk's on their way to the tag team gold. Wells tags back in and plants Hoss and Jimmy Jack with a series of slams. He misses a splash from the BOTTOM ROPE (come on, the BOTTOM ROPE?!) and gets knocked out of the ring. Diamond comes in with shoulder tackles, but Hoss quickly cuts him off with an elbow. Whip to the ropes and Jimmy Jack with a clothesline from the apron. Hoss ties up the legs and finishes with the Cloverleaf at 3:29. Post-match, they continue to punish Diamond until Wells makes the save.

"Adorable" Adrian Adonis and Jimmy Hart are standing by with this week's edition of ”. We have a VERY special guest, Bobby "The Brain" Heenan. He takes this time to say once again Andre the Giant is HISTORY. Hulk Hogan storms the set to interrupt, snatching the bouquet of flowers microphone to confront Adonis for stirring up trouble between himself and Orndorff. He's got more reason than ever to put his hands on Adonis and says Orndorff is like a blood brother to him. HE'S GONE TO HIS HOUSE AND BROKEN BREAD WITH HIS FAMILY. Paul's mother said he was like a NUMBER ONE SON TO HER. He's never had to look over his shoulder with a friend like him and calls him the best partner he's had. If Adonis powders his nose in the wrong place, his lingerie will be hanging somewhere in the department store because he's going down.

Jimmy is getting a ton of TV time this week. It's still "Brett" for those keeping track. Boyer has the respectable haircut of a guy who should be the Quarterback of an NFL team in the 1960's. Neidhart starts, tossing Boyer into the ropes. Boyer throws some awful forearms. Neidhart no-sells him and has to muscle up the sack of potatoes for a side back breaker. Hip toss across the ring and that is a terrible bump. Mancini comes in and takes a good bump to show us what good enhancement talent is all about. Bret with a back breaker and snap elbow drop. He traps Mancini in the tree of woe and stomps away at the midsection. Neidhart gets some shots in from the apron and the referee is all "I'm cool with it." Neidhart hoists Mancini up and the Hart Attack finishes at 2:21. Good call not letting that other goober back in the ring.

The Killer Bees, with masks on, cut a promo on teamwork and helping each other out. I'm not even going to waste my time coming up with insults for how dumb this concept is. The whole point is to teach summer safety, like having a swim buddy.

WOAH, WHERE DID DAVID SAMMARTINO COME FROM?! Last we saw him in the WWF, he did a shoot job to a jobber (Ron Shaw) at the Philadelphia Spectrum. He's made his return about a week before this show, and wouldn't you know it, was gone about a month later. Don't worry, he'll be back again for an even shorter stint. Poffo reads a poem dedicated to the Sammartino bloodline that is hardly putting David over. Tonga starts with Moondog Rex. Lockup and Rex grabs a side headlock. Crisscross and Tonga with a chop as we find out he didn't collect the $15,000 for slamming Studd because it was unofficial. He plants all three opponents with slams to clear the ring. Sammartino tags in and gets chopped across the chest by Spot. David snaps Spot over with an arm drag and tags in Poffo, who immediately gives up control. Whip to the corner, Poffo with a moonsault into a drop toe hold, followed by a flying head-scissors. Whip and Rex with a knee to the lower back. Thornton tags in to give everyone a nap. He takes Poffo over with a suplex and Spot tags back in, pounding away with right hands. Poffo fights his way to his corner and tags in Tonga. He nails Thornton with a dropkick and heck breaks loose with Tonga cleaning house again! He hits Thornton with an atomic drop and Super Kick for three at 3:51. Tonga might as well have done this match 1-on-3. David was mostly a non-factor.

Jake Roberts and Randy Savage meet up with Ken Resnick for more promos concerning the upcoming card at the Boston Garden.

Next Week: Paul Orndorff! The Magnificent Muraco! Santana and Morales! Spivey and Rotundo! Sheik and Volkoff! The Bulldogs! AND MORE!

Final Thoughts: The big news this week is the ongoing issue of Adrian Adonis trying to drive a wedge between Hulk Hogan and Paul Orndorff. We've seen the return/debut of Billy Jack Haynes, though he isn't immediately positioned as anything special, just another guy. We've got Andre's suspension still a topic of conversation, and John Studd being a cheap a$$ about paying up to Tonga for a body slam that he now claims wasn't part of an official challenge.