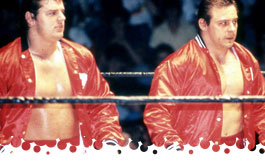 - Hosted by Vince McMahon and Bruno Sammartino, taped on April 21st from the Mid-Hudson Civic Center in Poughkeepsie, NY, the last from this round of the taping cycle. The British Bulldogs take on King Kong Bundy and Big John Studd in a NON-TITLE MATCH, along with "many other great matches!" Let's go to ringside!

Someone has a clever illustration for Arcidi with a barbell and weights, with "705" on each one, meaning Arcidi can lift 1,410 pounds, or the fan who came up with the design overthought it and now it's immortalized for me to mock. WHO GAVE THE GREENLIGHT FOR A TONGA/ARCIDI TEAM?! Arcidi vs. Barbie has potential to be the worst 30-seconds in wrestling. Lockup to the ropes and Arcidi gives a clean break. Barbie with a knee and soft forearms that Arcidi no-sells. Arcidi with a press slam, followed by a clothesline. Whip to the corner, and Gladiator tags in to get him some. He sells that his arm is hurt from hitting Arcidi across the chest. Tonga with a drop toe hold into a side headlock. Whip and Tonga with a shoulder tackle, followed by a running high knee. Barbie tries his luck again, and somehow does worse against Tonga than Arcidi. Tonga with a gut-wrench suplex. Arcidi with a hip toss out of the corner, followed by a jumping elbow drop. Whip to the ropes and Arcidi grabs a bearhug for the victory at 4:24. Way too long considering the action.

- UPDATE with Lord Alfred Hayes. Ricky Steamboat is the latest victim of Jake Roberts' humiliating behavior, as we see highlights from their "match" at Saturday Night's Main Event where Steamboat was KO'd with a DDT and given the Damian effect. Steamboat is back at 100% (2 weeks is enough time to recover from a severe concussion?!) and out for revenge.

Yes, a Hart Foundation squash will do wonders to rinse the taste of that opening match from my mouth. Poffo reads us a poem saying the Foundation together have no brains. The Foundation attack and quickly dump Driggers out of the ring. Poffo slips out of a slam and cradles Bret for a two-count. Bret hits Driggers with an inverted atomic drop, followed by a back breaker and elbow from the second rope. Neidhart gets launched into the corner with a shoulder to the midsection and pounds away with forearms. Bret with another elbow drop as we get an update on the disappearance of Andre the Giant. Hart Attack finishes at 2:10. They just mauled Driggers, but the Foundation still seem like mid-card filler in the division.

- KEN RESNICK is standing by to promote the WWF's return to the Boston Garden on May 24th. Hulk Hogan is here to cut a promo on Randy Savage. It's Champion vs. Champion, but only the Hulkster's title is on the line. I think this is our first look at Resnick, fresh from the AWA, and one of the earliest attempts at replacing Gene Okerlund with better looking on-air personalities. I don't think Resnick lasted much longer than a year with the company.

Oh great, our second (and last) look at Capone on WWF programming. I don't know if Jim and Pedro is a worse team than Tonga and Arcidi. Morales and Spot start. Lockup to the corner and they trade right hands. Whip is reversed and Morales takes Spot out of the corner with a sunset flip. Jim forces Spot to put the breaks on, sending him into the waiting arms of Morales for a slam. Capone tags in and goes to the eyes of Jim. Jim easily powers out of a front face-lock and plants Capone with a slam. Whip to the ropes and Jim with a big boot for three at 1:58. At least they kept this one short.

- Ken Resnick standing by with comments from Corporal Kirchner concerning his match with Nikolai Volkoff at the Boston Garden.

It feels like a lot of these guys in action aren't featured in prominent roles. I didn't realize the WWF used Saxon so much as enhancement talent. I figured he appeared once or twice and disappeared. He's still rocking the rhinestone jacket if you're curious. "The Big Cat" Ernie Ladd joins the commentary team for this one. Hercules starts with a knee to the midsection and boots to the head. He plants Saxon with a pair of slams, followed by clubbing rights. Hercules with a choke across the top rope, allowing Blassie to get physically involved for a moment and earn that payday. Whip to the ropes and Hercules with a big clothesline. Saxon resorts to raking the eyes, but Hercules shrugs it off and stomps him to the canvas. McMahon vaguely references when Bruno Sammartino broke his neck (against Stan Hansen). Hercules with a suplex and the Back Breaker finishes at 3:06. The match served as background noise to Ladd giving his analysis on the upcoming match between the Bulldogs and Bundy/Studd.

- Jimmy Hart and "Adorable" Adrian Adonis are standing by from the Flower Shop. This week's guests are the Intercontinental Champion, "Macho Man" Randy Savage, and his manager Elizabeth. Adonis and Hart have an Eskimo kiss. Adonis asks who does Elizabeth's makeup, and says he's jealous. Savage makes it about himself, saying there's no need to be jealous of him being the Intercontinental Champion. Adonis says he loves everyone and reneges on giving Elizabeth some flowers.

We are getting some whacky, thrown together teams. I'm glad to announce we're getting close to the TNT episode where Paul Christy got to showcase what a wonderful talent he was. Ernie Ladd is still sitting in on commentary. Spivey starts with Lombardi. Lockup and Spivey shoves Lombardi to the ropes. Fink cuts in with a promo for the WWF returning to Worcester on May 29th. Extensive crisscross and Spivey finally catches Lombardi in the air with a slam. He still throws the world's most awkward dropkicks and takes Christy over with a clunky arm drag. Why is a man the size of Spivey working like a Killer Bee? Santana takes Christy down with a hip toss and goes to the arm. Lombardi tags back in and sees himself stuck in the same precarious position. Ladd compares Tito to Marcus Dupree (a College Football player), which is the most random thing from this episode by a wide margin. Santana pounds away on Christy. Whip to the ropes and the Golden Sombrero hit him with a double elbow. Whip to the corner and Spivey charges in with an elbow before finishing with the bulldog at 3:20. Once again, a bunch of guys with no clear creative direction.

The feature match and a NON-TITLE MATCH. Where has Captain Lou been? We haven't seen much of him since WrestleMania 2. Davey Boy and Studd start. Lockup into the ropes and Studd with a forearm across the chest. Whip to the ropes and Studd with a shoulder tackle. Smith tries for a sunset flip, getting assistance from a Dynamite clothesline to take him over. Davey Boy with a dropkick, but Studd casually shrugs it off. Davey Boy with forearms across the chest and the Bulldogs take him down with a double dropkick. Heenan yells at his men to slow it down. Bundy in with a knee to the midsection, followed by a slam. Davey Boy avoids the elbow drop and the Bulldogs with another double dropkick, followed by a shoulder block. Bundy blows catching Davey Boy's body press and drops a knee to salvage it. Studd sends him to the ropes and hits a clothesline for two. Davey Boy slips out of a slam but is knocked down with a knee lift. BREAKING NEWS: The WWF is still investigating on the Andre the Giant dilemma. Studd sends Davey Boy to the corner but misses a charge. It doesn't seem to matter, as Bundy and Studd remain in control. Dynamite comes in and hops on Studd's back with a sleeper, but Bundy saves. The referee gets shoved and it's a Disqualification at 4:55. Davey Boy avoids the assisted Avalanche and we get a shoving match between Studd and Bundy because of it. Dynamite must've been hurting badly, barely doing much.

- Ken Resnick standing by with comments from Randy Savage, hyping his match with Hulk Hogan at the Boston Garden.

NEXT WEEK: The Iron Sheik and Nikolai Volkoff meet The Killer Bees! PLUS...WWF Heavyweight Champion Hulk Hogan will be here!

Final Thoughts: The lack of creative direction is making things a bit stale. You can only enjoy so many squash matches without having much to talk about. We saw tag match after tag match with randomly thrown together babyfaces that aren't going anywhere. They teased some dissention between Bundy and Studd, but that isn't going anywhere (for now), and we're again reminded of the Steamboat/Roberts rivalry, as well as Andre's absence but they've beaten those two things in our heads for a couple of weeks without so much as a fresh promo from either the Dragon or the Snake, and the stuff with Andre is the same bit every week.