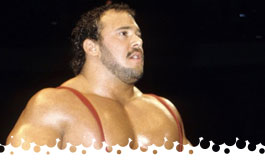 - Hosted by Vince McMahon and Bruno Sammartino, taped on March 31st from the Mid-Hudson Civic Center in Poughkeepsie, NY (the last from this cycle). Vince doesn't bother promoting anything other than the challenge that King Kong Bundy and Big John Studd laid down last week, which Andre the Giant has accepted, and chosen Hillbilly Jim as his partner. Well, that's sure to be something to see.

Good to see Steamboat back on good terms with Tonga. Tonga starts with Lombardi. Lombardi grabs a side headlock and a shoulder tackle doesn't budge him. Tonga with a back body-drop, followed by a hip toss and arm drag into a wrist-lock. Tonga works the arm with chops and a headbutt. Steamboat comes off the top with a chop and picks up on where Tonga left off. Whip is reversed and after a lengthy crisscross Steamboat hits a body press for a one-count. Deep arm drag into the arm bar. Lombardi rakes the eyes and tags out. Gladiator walks into a drop toe hold and gets caught in an arm bar. Tonga with a whip and dropkick to the FACE. Gladiator isn't the tallest man in the world, but that's still damn impressive. Tonga with a snap mare and STUMP PULLER. Whip and the Island Boys with a double chop. Steamboat with a swinging neck breaker. Tonga with an atomic drop and a knife-edge chop. Steamboat goes to the top and finishes with a flying body press at 3:29. This was a total destruction from the babyfaces, and very entertaining.

- "Update" with Lord Alfred Hayes. More talking of WrestleMania 2. Over FOUR MILLION HOMES watched at home, and FOUR MORE MILLION PACKED the closed circuit locations. I'm screaming bullsh*t on that one until my throat is sore. We see a clip from the Battle Royal introductions, notably William "The Refrigerator" Perry. "This was the greatest extravaganza of all time." The first lie was more convincing.

Poor Hercules lost his unbeaten record at WrestleMania 2 in a tough match with Ricky Steamboat. Lockup and Mancini grabs a side headlock. Whip to the ropes and Hercules lays him out with a clothesline. Hercules with a scoop slam and a series of elbow drops. He drops a knee on the chest and holds the shin across the throat for added insult. SOMEBODY STOP THE DAMN MATCH! Hercules with a delayed suplex as Bruno declares he's just going to torture Mancini some more. Mancini dares throw a punch, causing Hercules to stomp him back down to the canvas. Blassie smacks Mancini repeatedly with his cane, and the referee somehow didn't see any of it. Hercules finally finishes with the Back Breaker (Torture Rack) at 3:03. That's how you destroy someone. Vince mocks Hercules for dropping to his knees with Mancini still on his shoulders, saying that's a good way to compress the vertebrae. Decades later and Nikki Bella does it as a finishing move… and needs neck surgery.

Poor Tito, relegated to teaming with the broken-down Morales. Both are former Intercontinental Champions, and the similarities end there. Vince and Bruno are still talking about the destruction of Mancini. Morales starts with Mr. X. Lockup and X grabs a side headlock. Whip is reversed and Morales takes X over with a back body-drop. X rakes the eyes but is caught from behind with an atomic drop from Santana. Santana picks the leg of Petruzzi and grabs a headlock. Morales comes in with a shoulder tackle, followed by a slam. Whip and Tito and Pedro with a double elbow. I know it's harsh, but Pedro moves around like he belongs in another era. Tito fights out of the heel corner and tags in Morales to mop up. Santana back in with the flying forearm to put Petruzzi away at 3:15. I'm usually not too harsh on squashes, but this wasn't good. Morales and Tito isn't a team I want to see more of.

- BREAKING NEWS: Andre The Giant IS NOT HERE.

Yay, we've got ARCIDI filling in for the surprisingly absent Andre the Giant. You know, I'm thinking maybe everything wasn't on the level, like Studd and Bundy knew Andre couldn't make it for the match. Arcidi gestures slamming Studd. Over... and over… and over again. Arcidi and Bundy start, but not before Arcidi removes his weightlifting belt. Bundy wants Jim, so we've got Jim in there now. Lockup and neither with an advantage. Another lockup and Bundy clobbers Jim with right hands. Jim avoids an elbow drop and throws some rights of his own. Whip to the corner and Jim misses a charge by a week and a half. Jim quickly fights Studd off and tags in Arcidi. Studd cuts him off and pounds away. Whip, Arcidi ducks a slam and presses Studd up, but Bundy makes the save. Studd and Bundy double-team Arcidi and shove the referee for the DQ at 2:36. Yay, as if we expected a semi-clean finish. They continue working Arcidi over while Jim sells on the apron like he's been shot.

- Roddy Piper is standing by with Piper's Pit. This week, his guests are the Killer Bees. WAIT A SECOND, what happened to Brunzell's poor little wing? This is the number one team, and they got their wing hurt. Orton calls Brunzell a cheater for wrestling with a cast. CHEATERS! Piper denies Ace ever having a cast on. Blair wise cracks, saying Piper took one too many punches. Piper talks trash and immediately hides behind Orton. This would be the last Piper's Pit for quite some time.

Roberts continued his undefeated streak, disposing of George Wells at WrestleMania 2. Lockup into the ropes and Roberts with a shoulder to the midsection. Speaking of Andre, what happened to Andre the Giant?! Roberts goes to work on the arm but Malo counters with an elbow. He scoops Roberts up with a slam, sending him slithering to the corner. Roberts regains control and hits Malo with the short-arm clothesline. Roberts with a snap mare into a chin-lock, shoving Malo's face into the ominous green bag. Roberts with a slam and foot across the throat. Another hard slam and Roberts finishes with the DDT at 2:39. Post-match, Mr. Malo gets the Damian treatment. Roberts was a license to print money.

Oh, they saved the best for last I see. No Albano, which McMahon does call attention to. Maybe only one person is allowed in the corner? Well, then how do you explain Ozzy at WrestleMania 2?! Haiti Kid is allowed to stand on the apron for some reason. Steele chases Barbie around the ring, then does the same to Sharpe. Steele gets caught in the corner and Barbie throws the SADDEST knee strikes I've ever seen. Sharpe with a whip and clothesline, but Steele counters by biting the arm. JYD in with headbutts, Sharp bellowing to sell the entire time. Sharpe saves Barbie by tripping up the Dog, but the Haiti Kid gets a bite out of Sharpe and lures him around the ring and into a clothesline from Steele. THIS IS BEDLAM. Back inside, JYD winds up and clobbers Sharpe with a clothesline. DOUBLE NOGGIN KNOCKER. JYD holds Barbie so the Haiti Kid can bite him, too. Sharpe tries his luck again, but the JYD only sells for about 4-seconds. JYD hits Barbie with the THUMP for three at 4:35. This was just comedy to push Haiti Kid's involvement in upcoming matches.

- One more promotional spot for the upcoming card at the Boston Garden.

Next Week: Tito and Mr. Wonderful vs. Macho Man and Muraco! Update on Andre the Giant! MORE!

Final Thoughts: The big match-up featuring Andre the Giant didn't take place, though in WWF's defense, it wasn't advertised, just implied. They are planting the seeds for something down the line, with Andre's no-show being of unusual importance. The rest of the featured stars are still jockeying for a spot of meaningful use. They're promoting a huge match for next week, with May (at least back then) being one of those sweeps months where advertisement rights were sold, so more feature matches were put on TV to attract more eyes (a trend that continued through the 90's while the WWF was still in syndication).