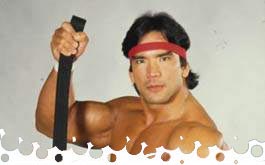 - Hosted by Vince McMahon and Bruno Sammartino, taped on March 31st from the Mid-Hudson Civic Center in Poughkeepsie, NY. WrestleMania 2 (What the WORLD has come to!) is in our rear view mirror, but with the next three weeks of programming taped in advance, I'm going to guess we will only see updates from that show through studio promos and updates. I don't have the intro to this episode, otherwise I would list the teaser of who we should expect to see this week.

If we're getting Steamboat stuck in a go-nowhere tag team, I'd rather watch him work with King Tonga. You could call them something like "The Islanders", or something more creative. Steamboat walked away from WrestleMania 2 with a victory over the now-defeated Hercules Hernandez, while the JYD suffered a tag team loss to Terry and HOSS Funk. As for X and Spot, who cares, they aren't important enough talent to get crammed onto an already bloated show. Steamboat starts with Mr. X as a voice-over from the Fink hypes the WWF returning on April 24th to Worcester, MA. Steamboat nails X with a BETA Super-Kick and goes to work on the arm. The JYD comes in to resume but X rakes the eyes to escape. Spot tags in and hurts himself going for a headbutt. JYD with two more headbutts for a two-count. Lockup into the ropes and Spot with a cheap shot to the midsection. Spot tries pounding on the head, but he still hasn't learned his lesson. The Dog backs X into the corner and tags in Steamboat. He nails X coming off the ropes with a chop, followed by another standing side kick. Whip and the JYD with the THUMP for three at 2:43. GRAB THEM CAKES, EVERYBODY! Actually, in the modern era of society and pro wrestling, don't. DO NOT. GRAB. THEM. CAKES.

- Lord Alfred Hayes is standing by with this week's Update on the incoming French-Canadian tag team of brothers Jacques and Raymond Rougeau. We see clips of them in action from Australia against the Moondogs (with Rex working in traditional gear instead of the cut-off denim). Tag Team competition is only getting stronger in the WWF.

UPDATE: The WWF is still spelling it "Brett Hart." From what I've heard, Bret didn't care for the spelling because traditionally "Brett" was the female version of spelling the name and asked for it to be changed to his proper spelling. OK, I've beat this into the ground, so I'm just going with "Bret" moving forward unless I forget about this like Mr. Burns forgetting Homer Simpson's existence. Bret and Neidhart had a strong showing in the Battle Royal, but were the last men eliminated by winner, Andre the Giant. There's a few signs in the crowd calling Hart a "greaseball", and we even get a chant of the same. Hart and Jones lockup, with Jones wiping his hands, insinuating the obvious. Jones grabs a side headlock and comes off the ropes with a shoulder tackle. Crisscross, Jones escapes a slam and rolls Hart up for two. Jones with an arm drag into the arm bar. Mancini comes in to pick things up, but Bret rakes the eyes and throws him into a boot from the Anvil. Neidhart drops Mancini throat-first across the top rope. Hart comes off the top with an elbow with Mancini resting across the knee of Neidhart. Neidhart shows off with a dropkick. Hart Attack finishes at 3:02. Hart Foundation squashes are always fun to watch, unfortunately there's still no direction for them.

- "Mean" Gene Okerlund is standing by to promote the card at the Boston Garden on April 26th. Johnny Valiant and his Dream Team are here, and they look forward to getting revenge for losing the titles to the British Bulldogs at WrestleMania 2.

Steele was unsuccessful in his bid to defeat Randy Savage for the Intercontinental Title at WrestleMania 2. He comes to the ring with a chair and chases Rizzo out of the ring. Rizzo tries to attack from behind, but that has no effect. The Fink pops in to promote the Boston Garden, including a Six-Man Tag with the JYD, Ricky Steamboat, and Haiti Kid taking on the Funk Brothers and Jimmy Hart, and a Worst Match of the Year contender featuring Ted Arcidi and Big John Studd. Steele tears apart one of the turnbuckles and gives Rizzo a taste of the stuffing. Steele rips open a second turnbuckle and takes Rizzo over with a sloppy crucifix cradle for three at 2:40. Steele goes back to the turnbuckle, which seems to have been the focus for his attacks all match.

- "Mean" Gene Okerlund is back for more hype for the April 26th card at the Boston Garden. Uncle Elmer will meet the Magnificent Muraco on top of the other matches we've talked about. Steamboat comes in for promo time, and it seems like the Haiti Kid should be involved in a match with Piper and Orton but making Jimmy Hart look like a goof is always entertaining. The Haiti Kid comes in doing his mock karate, with JYD selling the knee like he was his sparring partner.

No idea if we've seen Morgan before, but he doesn't look familiar. Muraco went to a Double Count-Out with Orndorff in the biggest disappointment of WrestleMania 2. Muraco yells at a ring attendant to clean the ring better of the turnbuckle stuffing. Lockup and Muraco with an easy takedown. Muraco takes Morgan over with a hip toss, followed by a snap mare and rolling neck snap. Muraco with a knee to the midsection and a gut-wrench suplex. Morgan gets tossed out of the ring and met with a chop from Mr. Fuji. Back inside, Muraco with a sloppy piledriver. Morgan tried going up for it too soon and paid for it. Muraco scoops him up and finishes with the reverse Piledriver at 2:57. "That's how you do a piledriver!" Is Muraco taunting Mr. Wonderful? Who knows?

- Jimmy Hart (with HOSS Funk watching his back) is standing by from the set of Piper's Pit, filling in for Roddy Piper. Jake "The Snake" Roberts is with him, with the snake in hand. Roberts says Damian doesn't do tricks. He doesn't do what anyone else wants, he has his own mind. When you play with snakes, sooner or later you'll get bit. Roberts offers Hoss to hold Damian. Hart has a note from Piper, apologizing for his absence, and insisting he isn't afraid of snakes. Hart says if Jake needs a manager, he can call him collect.

Here comes the world's worst babyface in Mr. Wonderful. Lockup and Lombardi grabs a wrist-lock. Orndorff counters with an overhead takedown. He takes Lombardi over with a pair of arm drags and hooks a hammer-lock. Lombardi with forearms but Orndorff hangs on to the wrist and remains in control. Whip is reversed and Orndorff somehow gets Lombardi with a drop toe hold while he (Orndorff) is the one in motion. Lombardi throws more forearms, as does Orndorff. Orndorff with an atomic drop as Vince calls Lombardi a "wet dish rag." Whip to the corner with a comical bump from Lombardi. Orndorff with a short clothesline and finishes with the Piledriver at 3:28. Is that how you do a Piledriver the right way?

I don't know if I want to see more of this team. Spivey had an uneventful performance in the Battle Royal while Kirchner stole a victory from Nikolai Volkoff in a Flag Match. I swear, the signs in this crowd have to be planted. Spivey starts by grabbing a side headlock on the Gladiator and coming off the ropes with a shoulder tackle. Spivey either botches a leapfrog or a Thesz Press, either way it turns into a tumble and he covers for two. Barbie tags in and walks into a hip toss. Kirchner tags in, coming off the second rope with an axe-handle. Whip to the ropes and Kirchner with a butt-ugly back body-drop. Barbie catches Kirchner off the ropes with a bear-hug, but an ear smack breaks the hold. Whip and Kirchner with an awkward dropkick. This whole episode is featuring some sloppy work, this match obviously more so than others. Spivey with a whip and elbow, followed by a slam and elbow drop. BREAKING NEWS: Highlights from the Tag Team Title Match from WrestleMania 2… NEXT WEEK. Gladiator runs into one of Spivey's patented ugly arm drags. Gladiator gets a little shine, taking Spivey over with a snap mare and hitting a knee to the chest for two. Gladiator goes for a slam but Spivey lands on top of him for two. Kirchner tosses Barbie across the ring and hits a swinging neck breaker. Spivey finally finishes with the bulldog at 4:30. The masked Gladiator looked the best of the four when it comes down to their technique.

- "Mean" Gene is standing by one more time to hype the Boston Garden on April 26th. Big John Studd promises to bring the $15,000 because he's still to be slammed (except for the dozens of times he has been) and cuts a promo on Ted Arcidi. He bets Arcidi can't get him more than 2-inches off the floor. Jimmy Hart comes in and isn't too keen on getting in the ring and wrestling. Terry Funk tries to hype him up for battle against the Haiti Kid.

Note on the Boston Card: Almost all the matches promoted didn't take place as advertised. The Dynamite Kid missed the show and ended up replaced by Pedro Morales, Danny Spivey subbed in for Uncle Elmer, and Terry Funk was replaced by a soon-to-debut Superstar from the extended Funk Family.

Next Week: Highlights of the British Bulldogs vs. Greg Valentine and Brutus Beefcake from WrestleMania 2! The Iron Sheik and Nikolai Volkoff, "Adorable" Adrian Adonis, Randy Savage. And the Killer Bees among others will be in action.

Final Thoughts: Not much to get excited for here. Taped before WrestleMania 2, most of the talent featured didn't have a huge impact at the PPV, except for Steele, who coming out without the Intercontinental Title probably gave away the result of that match. Most of the squashes are OK, except for the Kirchner/Spivey sh*t storm of a match. Hopefully, we'll get a little more bang for our buck next week, but with two more shows from this taping cycle, I'm not holding out much hope.