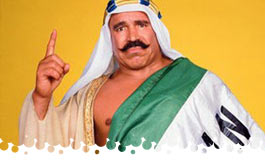 - Hosted by Vince McMahon and Bruno Sammartino, taped on March 11th from the Mid-Hudson Civic Center in Poughkeepsie, NY. We're a little more than 48 hours away from WrestleMania 2, so this should be nothing more than a massive hard sell, being the final weekend before the big event. We'll have special interviews with Mr. T and Hulk Hogan, with Hillbilly Jim, Uncle Elmer, and Adrian Adonis scheduled for action.

- Lord Alfred Hayes standing by with an Update on the WrestleMania 2 celebrities. It's the same list of people we've heard about, with two notable differences: Lee Majors name now dropped from the lineup, and Tommy Lasorda promises to do the ring announcements for the Steel Cage Match.

Our favorite hillbillies will be in action at WrestleMania 2, from two different locations: Hillbilly Jim will be one of 20 men in an over-the-top-rope Battle Royal taking place at the Rosemont Horizon, while Uncle Elmer takes on "Adorable" Adrian Adonis in Los Angeles. The Fink does a post-production shill saying closed-circuit TV is the only way to see WrestleMania. LIAR. Jim starts, locking up and sending Simpson into the ropes. Simpson goes for a slam but that isn't a wise decision. Jim scoops up Simpson easily for a slam and comes off the ropes with an elbow. We get an inset promo from Cab Calloway promoting WrestleMania 2. Whip and Jim with a shoulder tackle on Navarro. He connects with a clothesline and Elmer drops a fat-ass leg for three at 2:12. Talk about earning your $25 for the night of taping.

- "Mean" Gene Okerlund is standing by for an interview with "The Refrigerator" William Perry. They keep promoting that Andre the Giant is now 511 pounds. Perry doesn't say much.

Muraco is on the lineup to face "Mr. Wonderful" Paul Orndorff at WrestleMania 2. Lockup into the corner and Muraco drives a series of shoulders to the midsection. He tosses MacDonald across the ring with a hip throw and throws him out of the ring. Nice to see Rita Marie is still getting work. Muraco brings MacDonald back in with a half-assed suplex, then comes off the second rope with an Asian spike. Inset promo from Darryl Dawkins to promote WrestleMania 2. Seems like they got a lot of these out of him. Muraco continues to punish his poor opponent with elbows. He plants MacDonald with a slam and drops a leg for two. Muraco with a running powerslam and finishes with the Spike Piledriver at 3:01. Muraco gobbling up geeks is always entertaining. Not much focus on Muraco's match, more so when it comes to the celebrities involved at WrestleMania 2.

- "Mean" Gene is standing by with comments from Terry & Hoss Funk and Jimmy Hart, followed by "Macho Man" Randy Savage.

Spivey will take part in the 20-Man Battle Royal, while Kirchner faces Nikolai Volkoff in a Flag Match. Spivey starts with Lombardi. Lockup and Spivey shoves him off into the ropes. Spivey with a side headlock and shoulder tackle as Bruno and Vince discuss the beef involved in the Battle Royal. Crisscross and Spivey with a hip toss, followed by a slam. Spivey with a series of arm drags, sending Lombardi on a retreat to his corner. Petruzzi tags in and gets caught in an arm bar. Kirchner tags in and clobbers Petruzzi with right hands. Whip to the corner and Kirchner with a monkey flip. Cathy Lee Crosby with an inset promo hyping WrestleMania 2. Vince McMahon sounds very confused trying to tell us the difference between NETWORK TELEVISION and Pay-Per-View, constantly saying "WrestleMania won't be available on home TV." Double suplex from the Golden Corporal, and Kirchner finishes with a Fallaway Slam at 3:18. Another match served as background noise to promoting WrestleMania 2 and all the celebrities we'll see.

- "Mean" Gene is standing by with more interviews to promote WrestleMania 2. This time he's joined by "Mr. Wonderful" Paul Orndorff, followed by Johnny Valiant and his "Dream Team."

As mentioned earlier in the hour, Adonis is set to face Uncle Elmer at WrestleMania 2. Adonis is glammed up with ribbons, streamers, and makeup. Adonis with a leg sweep and leg-lock applied. Veilleux kicks Adonis off and takes him over with an arm drag. We get a mid-match break for Hart to brush out Adonis' hair. Bruno says Adonis' appearance is "revolting" as we get a classless chant from the Poughkeepsie crowd. Veilleux messes up being thrown through the ropes. Inset promo from Elvira, hyping WrestleMania 2. Whip to the corner and Adonis comes charging out with a clothesline. Adonis hooks a Cobra Clutch, and that's it for Veilleux at 2:32. Adonis keeps the hold applied after the bell because he's a heel.

- Highlights of Roddy Piper "on location" at the gym that Mr. T has been working out in. He's not amused by the heavy bag having a kilt attached to it. Joe Frazier abuses him with a medicine ball, trying to embarrass Piper in front of everyone else in the gym. Piper says if he keeps that up, he'll think he's back in Manilla.

- "Mean" Gene Okerlund with a WrestleMania 2 Report. It's more about hyping the Battle Royal, but then we get the 30-seconds of McMahon somehow announcing the entire card and the list of celebrities. It's almost as if he auditioned for the Micro Machines commercials with this.

Poffo reads a poem, hyping WrestleMania 2 and the main attractions on the card. The Sheik will be in the Battle Royal, and we've already mentioned Volkoff's involvement. Sheik starts, sending Poffo to the ropes and hitting him with a clothesline. Choke across the middle rope and Sheik with a seated splash. Inset promo from Tommy Lasorda hyping You-Know-What. Volkoff in, working over Driggers. He connects with a press slam into the back breaker. Sheik with a belly-to-belly suplex and finishes with the Camel Clutch at 1:28. We will NOT see that at WrestleMania. SPOILERS, VINCE!

- "Mean" Gene is standing by one last time to hype WrestleMania 2. Hulk Hogan gets to shine by himself to promote the Cage Match with King Kong Bundy.

- Vince McMahon and Bruno Sammartino sign off, but we can clearly see the Killer Bees and the Dream Team in the ring in the background. WHAT'S UP WITH THAT? (Update: It was a dark match for the taping cycle. I don't recall ever seeing a snafu like that on the syndicated shows.)

Final Thoughts: Not much to see here, as it was one last hard-sell for WrestleMania 2, and a LOT of hype for the 20-Man Battle Royal. You could say there was too much emphasis in promoting some of the low-level celebrities, too. I know I'm typing this in 2020, but even by 1986 standards, some of these choices are a bit… meh. Young me probably loved Elvira being there, but the majority of them seem like flash-in-the-pan celebs, if not worse.