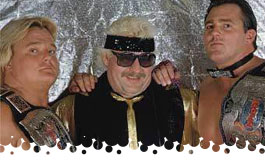 You could write quite the story on both guys on the heel side of things, but since we've already somewhat talked about Barry O, we'll focus on his partner, who normally went by the name JOHNNY K-9, but for some reason, was introduced differently here. Billed from Romania, K-9 (real name Ion Croitoru) was based out of Ontario, and had a mostly unremarkable career that carried through most of the 90's. It was his outside-the-ring behavior that is worth remembering, as he was a member of the motorcycle gang "Satan's Choice", bombed a police station, and allegedly murdered a lawyer and her husband, among other despicable acts of behavior. The scumbag died at the age of 53 in a halfway house, so the happy ending was his demise, I suppose. I spent more time on that side bar than the length of the match. Vince is REALLY trying to get "Golden Boy" over as Spivey's nickname. Kirchner starts, grabbing a side headlock on Barry. Whip to the ropes and Barry catches Kirchner with a powerslam. Kirchner avoids an elbow drop, sends Barry into the corner, and takes him over with a monkey flip. K-9 comes in as Sammartino questions his unique name. Spivey in to work the arm. Whip and Spivey with a big boot, followed by a slam and leg drop. Dude is literally ripping off the Heavyweight Champions arsenal. Whip and a double clothesline from Golden Corporal. Kirchner with a suplex on K-9, followed by a knee drop. Whip and Kirchner grabs a sleeper, but Barry saves. Kirchner remains in control and tags Spivey back in. He throws one of the worst dropkicks of all time. Whip and Kirchner with a fallaway slam for three at 4:07. Spivey is so amazingly awkward and green that he makes Kirchner look like a top-level worker.

- Lord Alfred Hayes is standing by for this week's "”." The 1st ever Slammy Awards took place on March 1st, televised on MTV. Roddy Piper was named the winner of "Best Personality in Land of a Thousand Dances." The trophy falls apart as soon as it's handed to him, but we're not fortunate enough to see him cut a scathing promo on MTV. The Junkyard Dog won Best Performance and is joined by whoever it is that performs the female vocals.

For such a high-profile athlete, Orndorff has been stuck doing nothing for a while now, disregarding the illegal cast gimmick that was thankfully killed off for the sake of promoting Mr. T's return to WWF programming. Lockup into the ropes and Orndorff gives a clean break. Thornton grabs a side headlock and comes off the ropes with a shoulder tackle. He lays into Orndorff with forearm uppercuts and sends him into the turnbuckle. Orndorff fires back with right hands and goes to work on the arm. Thornton with a fireman's carry takeover but Orndorff holds on to the wristlock. Whip to the corner, Orndorff avoids a charge and knocks Thornton out of the ring with a dropkick. I can see where Spivey learned to throw his. Thornton grabs a headlock from the apron but Orndorff carries him in with a back suplex. Orndorff from the top with a flying sledge and the piledriver finishes at 3:13. Decent back-and-forth considering it's a squash match. Orndorff acts a little bit like a jerk on the way out because HE'S AN AWFUL BABYFACE.

- WrestleMania only happens once a year!

- The WWF returns to the Boston Garden TONIGHT. Savage vs. Santana! Hogan & JYD vs. The Funks! Steamboat vs. The Hitman! LADIES IN ACTION! MORE!

Always a pleasure to see the Hitman and the Anvil in action, even if they're directionless at this point of their run. The spelling of Hart's name continues to be "Brett". Let me know which is more obnoxious, me gatekeeping on the spelling of a name, or refusing to acknowledge there's a team name for Beefcake and Valentine. Neidhart starts with Jones. Jones comes off the ropes with a shoulder tackle but Neidhart laughs it off. They do a crisscross ending with Jones landing a headbutt. He takes Neidhart over with an arm drag and forfeits the match by tagging in Malo. Neidhart quickly throws him across the ring via hip toss and Hart comes in from the second rope with an elbow drop. Hart pounds away at Malo and connects with a back breaker. Hart lands a headbutt and spits a huge loogy in Jones' direction. Neidhart with the assisted shoulder tackle in the corner, and the Hart Attack finishes at 2:54. Again, always fun to see the Foundation in action.

- Gene Okerlund hypes WrestleMania 2. It's all happening on Monday, April 7th, 1986, and coming from not one, not two, but THREE of the premiere facilities in the world. Hulk Hogan defends the World Heavyweight Title against King Kong Bundy inside a Steel Cage at the Los Angeles Sports Arena, Mr. T faces Roddy Piper in a Boxing Match at the Nassau Coliseum, and there'll be the "1st Annual" Open Invitation Battle Royal taking place at the Rosemont Horizon, featuring none other than "The King of Battle Royal's" Andre the Giant, as well as William "The Refrigerator" Perry of the newly crowned Super Bowl Champions Chicago Bears.

The Haiti Kid vs. Butch Cassidy:

The Fink, like Vince McMahon earlier in the show, refers to the participants as "Mighty Midgets." I wonder if McMahon attempted to trademark the phrase. Cassidy is a tall midget, almost as tall as Marko Stunt. Lockup and Cassidy grabs a side headlock. Whip to the ropes and he runs over Haiti with a shoulder tackle. Haiti Kid comes back with a pair of dropkicks and stops to adjust his footwear. Whip and Haiti Kid with a shoulder tackle, followed by a diving body press for two. Haiti Kid with a takedown into a cover for two. Cassidy rakes the eyes but makes the mistake of targeting the Haiti Kid's head. Haiti fires back with chops but Cassidy goes to the eyes again. Whip to the corner and Cassidy charges in with a knee to the chest. Haiti reverses another whip but meets the buckle on a charge attempt. Cassidy with a suplex and slam. Haiti avoids a leg drop from the top and bites his rear. Then he goes for a bite of the referee. Crisscross and Haiti cradles Cassidy for three at 3:01. Surprisingly light on comedy.

- Post-match, the Haiti Kid is nabbed by Roddy Piper and Bob Orton and carried off for an impromptu edition of ”. Piper has a roll of tape in his hands. He questions Haiti if he's a friend of Mr. T's, and the comment that he hopes Mr. T beats Piper up. Piper tapes up his wrists as he continues to belittle him. Piper produces a pair of scissors, and says if Haiti admires him so much, he might as well look like Mr. T, and starts cutting his hair to resemble Mr. T's signature look. Even after the humiliation, Haiti Kid says he thinks Mr. T will beat him. Astonishingly, McMahon keeps his cool and doesn't say the Haiti Kid is being raped of his dignity.

- "Mean" Gene Okerlund is standing by with an Update on WrestleMania 2. We see highlights of the incidents that took place at Saturday Night's Main Event. Mr. T and Hulk Hogan are standing by with comments from the set of the A-Team. Hogan says T is fighting for all the children, charities, and hungry people in the world. JESUS, that's one hell of a hard sell.

Take one guess which of those two babyfaces is taking the loss in this one. Valentine and Beefcake are still holders of the Tag Team Titles, having successfully defended them against the British Bulldogs at Saturday Night's Main Event. Poffo reads a poem before the match, dedicated to the future Tag Team Champions, the Bulldogs. BREAKING NEWS: Valentine and Beefcake will defend the titles against the Bulldogs again, at WrestleMania 2, with TWO referees to keep an eye on the action. Seems pointless, since the last match had a clean finish, but whatever. Valentine starts, taking Poffo down with a drop toe hold. Beefcake comes in to work the arm, but Poffo counters. Beefcake carries Poffo into the corner and tags Valentine back in, but Poffo is a house of fire. He knocks Valentine off the apron with a dropkick and brings Beefcake to his corner. Veilleux grabs a side headlock and is quickly laid out with a high knee. Beefcake with a slam and Valentine comes off the ropes with a pair of elbows. The crowd chants "Fruitcake" at Beefcake. Valentine with a sloppy shoulder breaker and knees across the back. Beefcake with a double under-hook suplex and a stomp across the chest. Valentine cuts off a tag attempt, takes Veilleux over with a slam, and finishes with the Figure-Four at 3:09. McMahon quips that Valentine is wearing a hat like Ed Norton would wear. It's 1986, so that's a dated "Honeymooners" reference, not the actor who gained fame towards the end of the century. Another fun squash, by the way.

- Next Week: "A most unusual tag team combination of Uncle Elmer and George "The Animal" Steele." WHO'S IDEA OF A SICK PRANK IS THAT?! Also, Adorable Adrian Adonis, The Killer Bees, The Macho Man, Nikolai Volkoff, and the Iron Sheik will be here, and we'll have a Special Update on WrestleMania!

Final Thoughts: It seems weird that the three locations and three Main Events of WrestleMania 2 were announced in such a ho-hum manner, but with those announcements, the card for WrestleMania is already coming together. We also know that the Tag Team Titles will be defended too, announced in even more of a low-key manner. To build heat for the Boxing Match, Piper and Orton assaulting the Haiti Kid was a strong segment, and thankfully lacked overbearing commentary from McMahon. Mixed around all this were a handful of solid squashes, making this an enjoyable 45-minutes of old school WWE content.