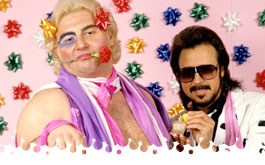 - Hosted by Vince McMahon and Jesse "The Body" Ventura (subbing for Bruno Sammartino), taped on January 28th from the Mid-Hudson Civic Center in Poughkeepsie, NY. This week, highlights of Tito Santana vs. Randy Savage for the Intercontinental Title from Boston, as well as appearances from "Adorable" Adrian Adonis, "Mr. Wonderful" Paul Orndorff, and WWF Heavyweight Champion, HULK HOGAN (Spoilers: He won't be wrestling).

And the winner for most random trio combination of 1986 goes to... either team, honestly. Kirchner is the only one with a decent push on a team that includes a former Mr. Everything (WWF, IC, and Tag Champion). Morales starts with Thornton, or as McMahon calls them, "two wily veterans." Lockup and Morales with a side headlock, followed by a shoulder tackle. Kirchner in to control with a headbutt. Thornton with a takedown into the corner before tagging in Barbie. Kirchner fights back to his feet and brings Barbie down with a back suplex. Whip to the ropes and they blow a side slam spot so spectacularly, and then they repeat the spot. Spivey grabs another headlock. Spivey fights out of the heel corner, throwing right hands. Morales with a whip and left hand to the midsection. Brooks tries to attack from behind, but Morales fights him off. Spivey back in to finish Barbie with the bulldog at 3:13. I was more entertained thinking about the match than watching it.

- Lord Alfred Hayes is standing by with this week's "Update." Roddy Piper continues to frustrate the brass of the World Wrestling Federation, introducing us to "Boxing" Bob Orton because of the ban on working with a cast on his wrist. We're shown highlights of that dog-poop match Orton had with Jose Luis Rivera, and we're still left questioning what the point of all this is.

- Buy a copy of "The Wrestling Album" NOW! What are you waiting for, go on eBay right now and lowball an offer.

- Buy some LJN Thumb Wrestlers while you're at it, too.

- Nominees for Best Personality in Land of a Thousand Dances... who cares. The big news is that THE SLAMMY AWARDS will take place on March 1st and be featured on MTV. Unfortunately, I don't have a copy of the show, and WWE Network took down all the "Slammy Award" videos they had uploaded some time ago.

Fink introduces the geek as "Jim" but the graphic reads "Jeff." I guess we're supposed to pretend we're deaf. Muraco dedicates his piledriver to Jesse Ventura. Lockup and Muraco lays into Londos with rights. He drives a knee into the face and drops an elbow. Snap mare out of the corner and Muraco with a jumping knee drop across the chest. Muraco drops Londos across the top rope and catches him underneath the ropes with a slingshot. McMahon reminds us that next week, Saturday Night's Main Event returns to NBC. Muraco finishes with the Spike Piledriver at 1:50. That was brisk for a Muraco squash. Didn't even toss Londos to the floor. It's safe to say Muraco's feud with Steamboat is officially dead, as we've gone several weeks without so much as a passing comment.

- "Mean" Gene Okerlund is standing by to hype the WWF returning to the Boston Garden on March 8th. "Macho Man" Randy Savage defends the Intercontinental Title against the man he defeated for the belt, Tito Santana.

No introductions, as the unnamed opponent attacks Orndorff, only to be laid out with an inverted atomic drop. I don't recognize who he is, but he has a dumb haircut, so there's that to investigate. Orndorff tosses "Mohawk Guy" (Ventura's words) out of the ring and slams him on the concrete floor. Back inside, Orndorff comes off the top rope with a double axe-handle. He takes Mohawk Guy over with a snap mare and comes off the ropes with a knee drop. McMahon asks if Ventura has a better body than Orndorff, and of course he says himself based on his looks alone. Whip and Orndorff with a stiff clothesline. Piledriver (and a beauty) finishes at 2:19. Two guys with similar finishers in back-to-back matches? Shame! No mention of any angles involving Orndorff. He carries a fan from out of the crowd, rips off his top, and encourages him to pose. Orndorff, the smiling babyface, yanked him through the ropes by the arm and flagrantly dropped his Hulk Hogan foam finger. Have I mentioned Orndorff is an awful babyface?

Nice to see we're getting enhancement talent with a decent haircut. I'm a bit surprised to see Roma was about to turn 26 at this point. I figured he was a few years younger. Adonis is wearing heavy makeup over his left eye. I wonder if this is around the time, he lost a fistfight with Danny Spivey. Lockup and Roma with a hip toss. Roma is in all white, a far cry from his usual black and/or red gear. Roma with two more hip throws, sending Adonis into the corner in frustration. Ventura says Adonis would win the award for "Most Abs." Adonis lays into Roma with rights and sends him into the corner. Adonis with a slam and drops Roma throat-first across the top rope. Whip and Adonis with an elbow. Adonis shrugs off a flurry of strikes and finishes Roma with the DDT at 2:50. McMahon promises we'll see Adonis on Saturday Night's Main Event. The Rosatti sisters can be seen in the crowd, taunting Adonis with a large bra.

- Roddy Piper is standing by with this week's "Piper's Pit." "Boxing" Bob Orton is still hanging around in the background with the boxing gloves on. Please, not another match. Piper claims no one wants to accept the challenge anymore. Suddenly, Hulk Hogan shows up with some papers in his hand. Piper asks "Bozo" if he wants to put the gloves on, but Hogan snatches the microphone from him before he could continue the harassment. Hogan says he'd love to step in the ring with Boxing Bob, but he has a good friend that begged him for a match with Boxing Bob Orton. Hogan signs the contract and shows it to Roddy Piper, revealing Orton has signed on to face... MR. T. Piper freaks out about it, trying to back out of the offer, but ultimately accepts it.

- Highlights of Randy Savage winning the Intercontinental Championship from Tito Santana on February 8th from the Boston Garden. By 1986 WWF standards, the full match is in the 4-star neighborhood, with a molten crowd to go with the action. As over as Santana was, his reign as Champion wasn't much to speak of, often featured on syndication in meaningless matches, and not having much to do as far as feuds go for the second half of '85.

- Vote for Best Performance on "The Wrestling Album." THIS IS YOUR ABSOLUTE LAST CHANCE TO VOTE!

I love seeing familiar faces in the enhancement role. There's a chance McGhee gets a little shine, but Powers is a bottom feeder at this point, and likely to take the fall. McMahon is excited to see "Clubber Lang come to life" on Saturday Night's Main Event. Valentine and McGhee start. Lockup into the corner, McGhee avoids a charge and connects with an inverted atomic drop. Powers in to work the arm. Whip to the ropes and Valentine with a hip toss, followed by a slam. Beefcake thumbs the eyes, but not before making sure the referee's view is obstructed. Beefcake works a spinning toe hold as Ventura and McMahon talk about Elvira. Powers fights to his corner and tags McGhee back in. McGhee unloads with European uppercuts, then makes the mistake of tagging Powers back in. He gets a dropkick and sunset flip for barely a one count. Beefcake with the blind tag and boots Powers in the midsection. Beefcake with a powerslam, and Valentine finishes with the Figure-Four at 3:06. Decent squash, with Powers and McGhee getting a little shine along the way.

- More hype for the March 8th card at the Boston Garden. Terry and Dory Funk cut a promo on the JYD and Hulk Hogan.

Final Thoughts: The big news this week is Mr. T returning to action, accepting the challenge to face Bob Orton on the upcoming episode of Saturday Night's Main Event. Other than that, a mostly unspectacular episode, with a few squashes featuring Superstars between angles. The best of the bunch is the show-closing match featuring the Tag Team Champions, though there's no new updates regarding the British Bulldogs challenging for the belts.