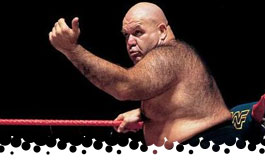 - Hosted by Vince McMahon and Bruno Sammartino, taped on January 28th from the Mid-Hudson Civic Center in Poughkeepsie, NY. This week, Corporal Kirchner teams with George Steele to take on Nikolai Volkoff and the Iron Sheik. Wow, thanks for spoiling the surprise, Vince. Steele wanders across the screen with a bouquet of flowers, which has Sammartino questioning if he's scheduled to be there this week. DUDE. Also, we'll see the Macho Man Randy Savage, as well as King Kong Bundy and Big John Studd in action.

No mention of Cousin Luke, though he would remain with the company throughout the year, but in an increasingly limited role as the months go by. He had a few more syndicated TV appearances after this, but no more than you could count on one hand. Bob Bradley is one of those enhancement guys who stuck around forever, consistently finding work for the WWF. Jim starts, catching Gibbs off the ropes and planting him with a slam. Whip to the ropes and Jim with a shoulder tackle. He catches Gibbs in a bearhug, then traps Bradley as he tries making the save. Bradley stays in the ring, drawing the ire of McMahon directed at the officiating. Jim gives him an atomic drop and throws a couple of soft right hands. Elmer tags in, has Bradley bounce of his body, and finishes with a leg drop at 2:30. I apologize to the memory of the JYD: THAT was the laziest work at this taping. Nice of the babyface to lay both his feet on the ropes with the cover, too. The Hillbillies have no direction at this point, just an act on the card that can get crowds pumped without investing time into a serious storyline.

- Lord Alfred Hayes is standing by with this week's "Update." Last year's WrestleMania lit up the world, and so much has happened since then. The expectations have risen to NUCLEAR INTENSITY. We get clips of last year's WrestleMania, which is 2-5 second showcases of Cyndi Lauper, Billy Martin, Muhammad Ali, and Liberace. We'll know more on WrestleMania 2 as it comes in. What a weak update, even by 1986 standards.

- Nominees for Best Personality in Land of a Thousand Dances: The Junkyard Dog, Fabulous Moolah, Gene Okerlund, Jim Neidhart, Brutus Beefcake, and Uncle Elmer. Woah, RECYCLING THE LIST OF NOMINEES? HOW DARE YOU!

I wish I had something interesting to say about the enhancement talent, but I don't. Heenan again insists on being recognized as the Manager of the Year. Studd starts, taunting McDonald into attempting a slam, and it goes as well as you'd hope. Whip to the ropes and McDonald takes a spill out of the ring. What, does the geek not know how to run the ropes, or was that a designed spot? Studd brings him back in from the apron with a hip toss, and that looks bad, too. The Fink hypes a card in Worcester, MA as the action takes place. BREAKING NEWS: Wrestlers (Orton, Orndorff) are no longer permitted to compete in a WWF ring while wearing a cast. Studd sends Bowlin into the corner and Bundy crushes him with an Avalanche. Bundy with a splash to finish at 2:40. That level of domination was expected. Odd they'd announce the deal with Orton and Orndorff's casts during a squash that involves neither man.

- "Mean" Gene Okerlund hypes the card returning to the Boston Garden later in the night.

Santana is the reigning Intercontinental Champion, but that might change after this episode. The conspiracy theory in my head is going wild, trying to rationalize a scenario with Mr. X bitter about losing here and using a gig as a referee to screw Santana out of the title, but that's crazy talk. Lockup and Santana grabs a side headlock. X tries and fails to control with an overhead wristlock. Bruno says Tito will be the Champion for a long time to come. About that... Santana easily counters a full nelson, sending X scurrying for the ropes. Whip and Santana with a shoulder tackle, followed by a hip toss and arm drag into a side headlock. Whip and Santana with a back body-drop before finishing with the Figure-Four at 3:15. Not the most exciting squash match.

- WrestleMania only happens once a year.

- Gene Okerlund hypes the card at the Boston Garden for tonight. Piper vs. Sammartino in a Cage! Santana vs. Randy Savage for the Intercontinental Title! MORE!

With their victory over Valentine and Beefcake (a.k.a. "The Dream Team"), the Bulldogs must be next in line for a Tag Team Championship Match. Davey Boy starts, trading wristlocks with Petruzzi. Davey Boy rolls through with a counter and takes Petruzzi to the canvas with an arm bar. Into the ropes and Petruzzi gives a clean break. He surprises Davey Boy with a rolling school-boy, but they end up in the ropes. Hip toss out of the corner and Petruzzi rakes the eyes. Davey Boy pops right up and plants him with a slam. Dynamite comes in and runs through Petruzzi with a shoulder tackle. Petruzzi misses a charge and Dynamite comes off the top with a missile dropkick! Snap suplex from Dynamite and the delayed suplex from Davey Boy. Gladiator tags in and is whacked with Dynamite's hook clothesline. Davey Boy with a powerslam from the top rope to finish at 2:57. Davey Boy gave Petruzzi a little too much in my opinion, but they're always great to watch.

- Piper's Pit, and Roddy Piper isn't happy about the announcement that Bob Orton isn't allowed to wear the cast anymore. He's been listening to the complaining about punching too much, to the point they should wear gloves, and Piper decided to take that complaint literally and introduces us to "Boxing" Bob Orton. Since there's no one that wants to wrestle them, they're offering an open contract for anyone to step up and face Orton in a fight with the gloves on.

I feel like I've seen my fair share of Dose matches that I don't need to see him being squashed any more. Elizabeth is a lovely lady, but the handheld from the apron does as much as they can to shoot down the top of her dress. George Steele makes his way to ringside with flowers and hands them to Elizabeth. Savage snatches them from Elizabeth and tears them apart. McMahon says maybe this distraction will lead to an upset, but Bruno says Dose is too laid back to have a chance. Savage attacks from behind with a running high knee, plants Dose with a powerslam, and finishes with the Flying Elbow at 0:23. He kept his sunglasses on the entire time. Looks like Savage vs. The Animal is far from over.

- Vote for Best Singles Performance on the Wrestling Album and give the WWF your address so they can harass you with an endless supply of catalogs.

That is an odd combination on the babyface side of things. According to TheHistoryofWWE.com, this match was taped on January 7th. I never understood mixing tapings, but whatever. McMahon almost acts surprised that his partner is the Animal. AM I MISSING SOMETHING? Steele teases chewing open a turnbuckle pad but calms himself down. Kirchner and Sheik start. Sheik with a fireman's carry and Kirchner quickly responds with a head-scissors. Lockup, Kirchner blocks a hip toss and counters with his own. Volkoff's cheap-shot backfires and Kirchner nails him off the ropes with a clothesline. Has Volkoff EVER taken a flat back bump? Sheik goes to the eyes and hits Kirchner with a clothesline of his own. Kirchner takes the Sheik over with a suplex and tags in the Animal. He runs wild, but Volkoff quickly comes in for a 2-on-1 and knocks Steele over the top rope. He runs around the ring and brings a chair into the ring, then whacks Sheik with it for the Disqualification at 2:36. Kirchner deserves to lose for picking Steele as his partner. I don't get the point of doing the match when that is your finish.

- More hype for the Boston Garden. There's a recap available elsewhere, and my opinions are practically the same. Tito Santana losing the Intercontinental Title to Randy Savage is a must-see, and Piper vs. Sammartino is a solid showcase considering Sammartino's age and limitations. Elsewhere on the card is a good tag match between the Killer Bees and Hart Foundation, and Steamboat vs. Muraco (subbing for Mr. Fuji) is a bit better than what they did at the Philadelphia Spectrum on January 11th.

- Next Week: The Junkyard Dog takes on Terry Funk! Someone accepts the challenge of "Boxing" Bob Orton! The Killer Bees, Ricky Steamboat, and King Tonga will be in Action. Oh, and FORMER WWF Superstar Superfly Snuka has a Cousin. He goes by the name "Superfly Afi", and he'll be here next week, too. OH GOD, I CAN'T WAIT FOR THAT.

Final Thoughts: Things are aggressively picking up, as they continue to push angles like The Animal/Savage, Bulldogs/Beefcake and Valentine, and Kirchner/Volkoff and Sheik, but now they made the move to force Orton to remove his cast and now he's randomly doing a Boxing gimmick that I'm sure will lead to something important. The random announcement of a marquee match like the JYD vs. Terry Funk for next week makes me believe something of significance will take place there for future development. Oh, and look out, WrestleMania 2 is coming.