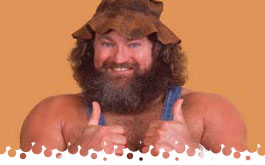 - Taped from the Mid-Hudson Civic Center in Poughkeepsie, NY, on December 17th, 1984 (yes, the tapings were just as bad in the mid 80's as they were into the 90's), with Vince McMahon and Bruno Sammartino calling the action, unless otherwise noted. We can look forward to "The American Express" and the highly anticipated DEBUT of Hillbilly Jim!

Rotundo and Windham are rapidly climbing the ladder of success, according to Vince McMahon. He continues to push them as "The American Express." Rotundo starts with Petruzzi. Petruzzi manages a hip toss before eating a dropkick. Windham shoots him into the ropes and drives an elbow into the chest. Carabello tries his luck, and he has plenty of it. Unfortunately, it's all bad. Windham with a suplex and elbow drop for two. Rotundo in with another dropkick. Rotundo rides Carabello, but Vince doesn't care to call anything to do with actual wrestling. Rotundo drops a leg across the chest for two. Windham with a glancing blow dropkick, then finishes with the bulldog at 3:44. Rotundo sure does sweat a lot. You can tell with how often they're featured (and having entrance music) that these two are going to get a good push sooner than later.

- From the rhythm of Michael Jackson's "Wanna Be Starting Something", here's Update with Lord Alfred Hayes. He tells us about an incident that recently took place at Madison Square Garden involving Cyndi Lauper and Roddy Piper, among others (including Dick Clark). We continue to milk NOT SEEING WHAT THE HELL HAPPENED. I know this was 1985, but how do they not have any footage, or even photos, of what took place?! It's been a month! Even by the standards of the era, that's milking it hard.

Unless this is a pie eating contest, I don't like the odds of any team with Rusty Brooks on it. Tonga Tom starts with Brooks. Brooks surprises everyone by rolling Tonga up for a two-count. Brooks shoves Snuka into the corner and casually tags out. Barbie immediately gets planted with a slam, and Snuka finishes with the Splash at 2:17. Seriously, who was getting the push here, the Islanders or Porky Pig? Oh well, the crowd still loves Snuka despite doing almost nothing.

- "Mean" Gene Okerlund is standing by to promote the upcoming card at the Boston Garden. Big John Studd, with the baggie of Andre the Giant's hair, is here to promote his Texas Tornado Match, teaming with Ken Patera to take on Andre and the JYD. Studd rambles on until Okerlund cuts him off and sends us to commercial.

I'm not complaining about all the tag team squash matches. They're much easier to sit through, considering the era and quality of workers in the WWF. Volkoff gets cheap heat by singing the Soviet Anthem, but Windham and Rotundo storm ringside with American Flags to trigger what is likely an insta-feud. Volkoff was at least able to keep composure for most of it. Sheik and Jones start, lasting about 13-seconds. Volkoff hits Marino with an overhead back breaker, as ugly as ugly can be, and drops an elbow. Crowd chants U-S-A as Sheik hits a drifting back suplex, then finishes with the Camel Clutch at 2:00. S.D. Jones, you are a WORTHLESS partner. First you let Andre have his dignity raped, and now you let Marino get squashed as you stand on the apron like a goof.

- "Mean" Gene Okerlund interviews Andre the Giant for more comments on the upcoming Texas Tornado Match. Andre gleefully points out he was disqualified last time that he met Studd in the ring. Okerlund randomly notes during the hype for Boston that Wendi Richter is the Women's Champion and FORMER Dallas Cowboys Cheerleader. Doubt it. We get more blatant theft of licensed music: Hall & Oates "Out of Touch."

Wells is considered a "great Canadian Football star" (McMahon said it, not me), making his first appearance on Championship Wrestling. How come HIS debut wasn't hyped?! Crisscross and he hits a crescent kick, followed by a jumping head scissors. Kelly gets a bit of token offense in before getting dumped on his head with another head scissors. Kelly (and his "unusual looking physique") with more offense that goes nowhere. Whip and Wells with a diving shoulder tackle for three at 2:06. Not an awful debut. Wells moved well enough, but I'm sure he had as much charisma as a pencil, so he never got much of a push.

- Piper's Pit with Blackjack Mulligan. As usual, Bob Orton is looming over the shoulder of Piper. Piper mentions Mulligan hosting his own interview segment, "Mulligan's B-B-Q". He wonders how he can be considered qualified enough to interview anyone, and rambles about "everything being bigger in Texas", including toilets. Piper cuts to the point: "I think you stink." He's not intimidated by Mulligan but makes sure to note Orton is his bodyguard. Mulligan barely got a word in, but that wasn't unusual for babyface guests on Piper's Pit.

For the sake of curiosity, I checked the January 19th episode, and sure enough, almost all singles squashes, so I'm glad I decided to skip it in favor of this episode. Spot and Lombardi start. McMahon randomly notes there used to be a 3rd Moondog (King) that was the last of the litter. Spot with side kick, followed by a knee lift. Lombardi gets worked over by both Moondogs. Don't worry, you'll get a WrestleMania Moment™. Seriously, he does: He gets to pick a fight with the Red Rooster at Mania 5. The referee chastises Spot for picking Lombardi up from an obvious three-count. Rex with a sloppy slam that could be considered both irresponsible and unprofessional. Young tags in and gets planted with a power-slam. Spot with the Decapitation Elbow to finish it at 2:44. Another decent squash, but the Moondogs spot on the depth chart doesn't give them much room to work with.

- The Magnificent Muraco and Mr. Fuji are STILL hanging out on the beaches of Hawaii, teasing the return of Muraco, who cuts a generic promo instead of singling out Hulk Hogan. I love how he talks about being in shape, but has an obvious muffin top.

After weeks of training montages both inside the ring and in the gym, it's the in-ring debut of Hillbilly Jim, WWE Hall of Famer (I'm so glad I waited this long to recap the episode, with that announcement just made on the March 5th, 2018 episode of Monday Night Raw). Take the damn hat off, Jim! You see, he's a simple bumpkin and doesn't know better. Jim escapes a full nelson attempt and starts marking out for himself. I see Ronda Rousey has been studying these tapes closely. Unfortunately for her, 1985 WWF audiences weren't as smartened up as the modern audience. Jim no-sells everything Gibbs throws (including himself) and plants him with a slam. Gibbs cuts the nonsense and just throws rights and lefts. Jim sells like a drunk Jim Duggan before Hillbilly'ing Up and finishing with the Bear-Hug at 2:48. I think George Wells had a better debut, but he didn't have the backing of Hulk Hogan for obvious reasons (he's a football player. What, you thought I meant something else?). McMahon seemed way too overjoyed watching this unfold.

- "Mean" Gene Okerlund standing by with one more interview hyping the card in Boston. "Mr. Wonderful" Paul Orndorff throws shade at Ivan Putski. There's a match I'm glad I don't have to recap (that and any other match with Putski).

- Next week on Championship Wrestling... who cares, we won't be recapping it. At least it's part of the first tapings from 1985!

Final Thoughts: Hillbilly Jim finally debuted, and it looks like they're starting the obvious USA vs. Foreign Villains program between the "American" Express and Volkoff and Sheik. George Wells debuted too, but he's an insignificant addition to the roster. Since we won't cover the next episode (or have any true pattern other than moving forward with 1985), I'll spoil it and say The Magnificent Muraco finally made his return to WWF television on the February 2nd episode of Championship Wrestling. My only regret... when are we getting the footage from MSG, AND WHEN ARE WE GETTING TO THE FIREWORKS FACTORY.